Did these five facts put a gemstone-like sparkle in your eye? Read on for the full article to learn more about what makes handmade jewelry shine.

Handmade jewelry has been a sought after closet “staple” for decades. Whether it’s the only kind of jewelry you buy or something you picked up on vacation, you have at least one piece of handmade jewelry. What is it about something that’s made by hand that draws our attention? My theory is that an artisan’s personal connection and love of their craft transforms ordinary objects into jewelry masterpieces. Still, most people don’t understand the true value of handmade jewelry compared to its mass-produced counterparts. There are many reasons why handcrafted jewelry is more of an investment than pieces that are produced in mass quantities, so we thought we’d break it down for you! Below are 11 things you didn’t know about handmade jewelry. 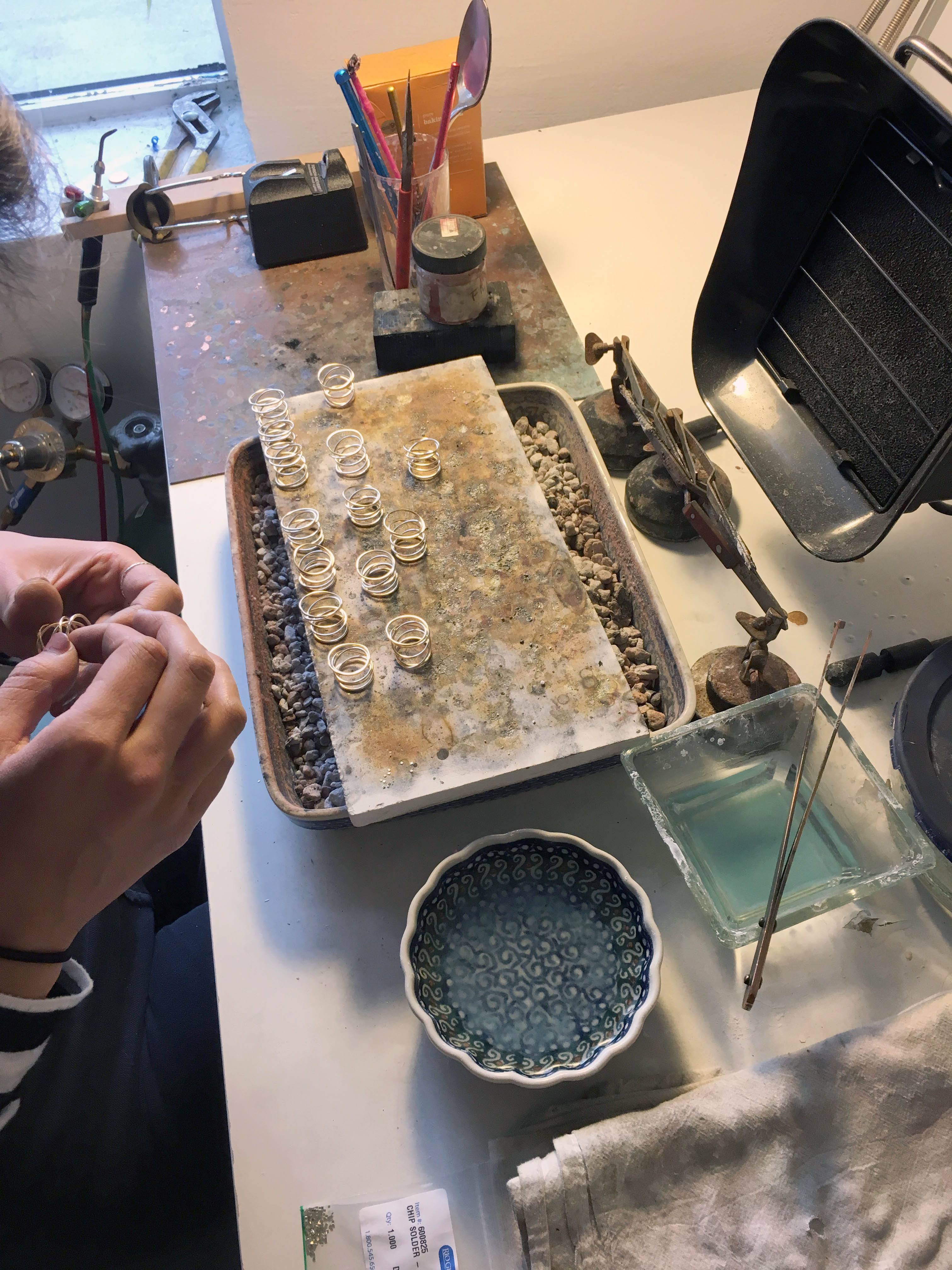 “I get to hatch an idea for a new piece and BOOM! I can make it appear. Feels magical.” — Britta Ambauen

END_OF_DOCUMENT_TOKEN_TO_BE_REPLACED

Inside the Artists’ Studio with Jewelry Makers Cameron and Rebecca Stern 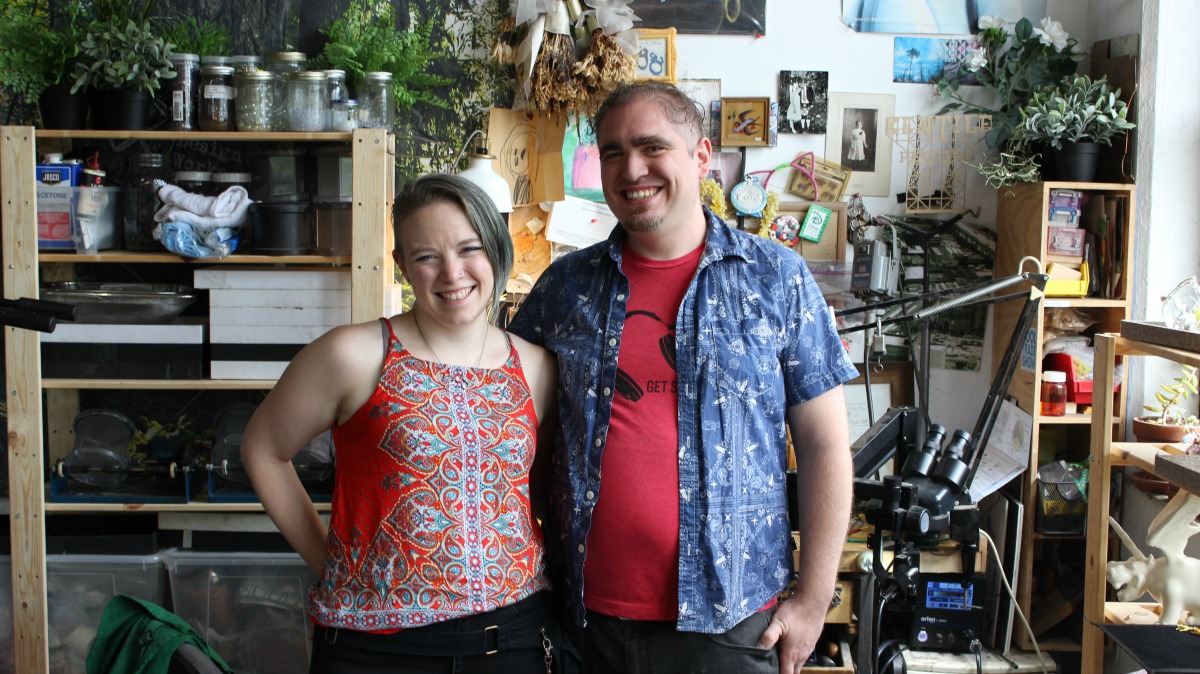 Rebecca and Cameron Stern in their Red Hook, Brooklyn, studio

I’ve talked to several creative people who have distinct memories of watching Mr. Rogers show us how crayons are made, so it didn’t surprise me when jewelry designer Rebecca Stern mentioned being inspired by the great Fred Rogers’ televised visits to interesting factories, where he gave curious kids a look behind the scenes. I even felt a little like I was in one of those videos when I visited Rebecca and her husband (and business partner) in their Red Hook, Brooklyn, studio. Their space is filled with tiny bits of inspiration, interesting models and miniatures, and plans to make their next imaginative designs.

If you’re one of those folks who remembers feeling a sense of wonder as you watched wax pour into metal molds as a kid, I think you’d feel the same way within the walls of the Sterns’ space. From watching images on Cameron’s computer screen materialize in the 3D printer, to trying to figure out how they get their detailed dioramas so darn small, to listening to stories of family explorations and adventures, every moment in the studio left me a little more intrigued than the last. Rebecca even made a few pieces while we were there. Watch our video below to see our own version of How It’s Made, then keep reading to learn how science influences the couple’s work, why they’ll never stop experimenting, and what it looks like when you put two very tiny giraffes in an Erlenmeyer flask.

END_OF_DOCUMENT_TOKEN_TO_BE_REPLACED

Jewelry to Make Your Valentine Shine 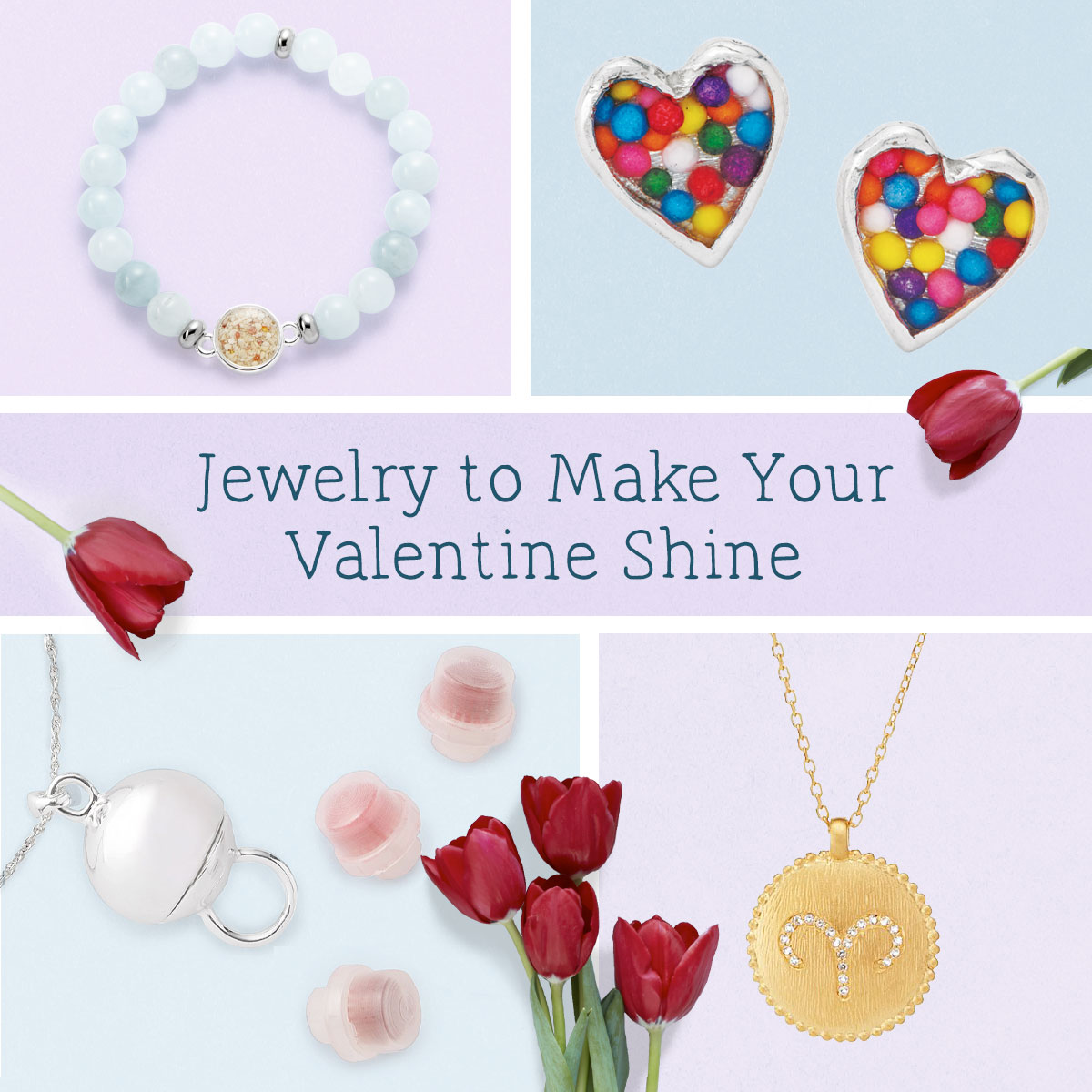 Dating five months vs. married five years. A bond built on world travel vs. raising kids together. A love you’ve just discovered vs. one with lots of history. The jewelry here toasts your one-of-a-kind connection. Made with love, each piece celebrates its special sparkle.

END_OF_DOCUMENT_TOKEN_TO_BE_REPLACED 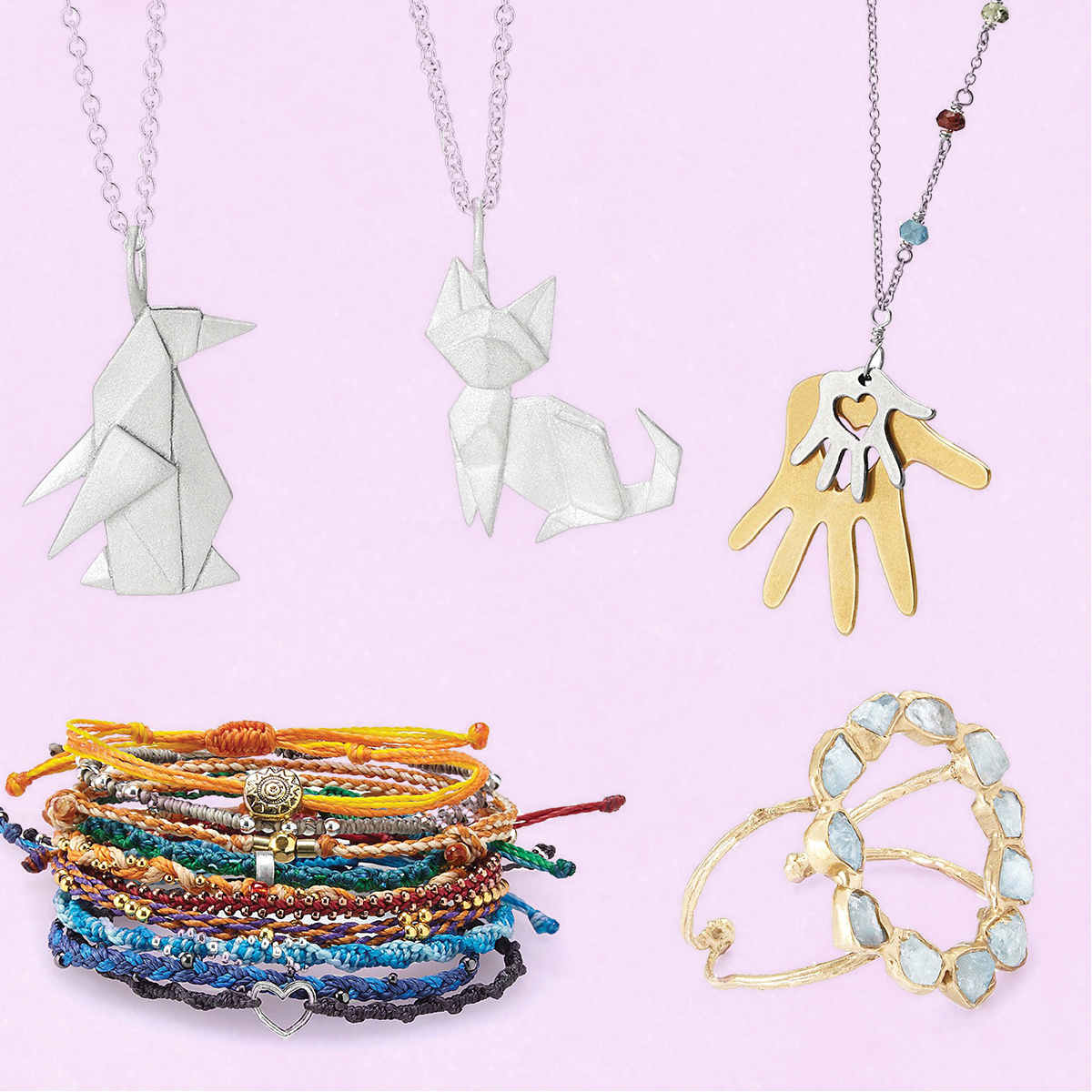 With more than 4,000 uncommon goods to choose from, you might need some help finding your new favorite things. Each week, we’ll round up a mix of the brand new, the tried-and-true, and our personal picks. This week, we’re narrowing down the list a little more, just in time for Mother’s Day!  Our Jewelry Buyer, Sharon, picked out a few of her favorite jewelry pieces and told us what she loves most about them. 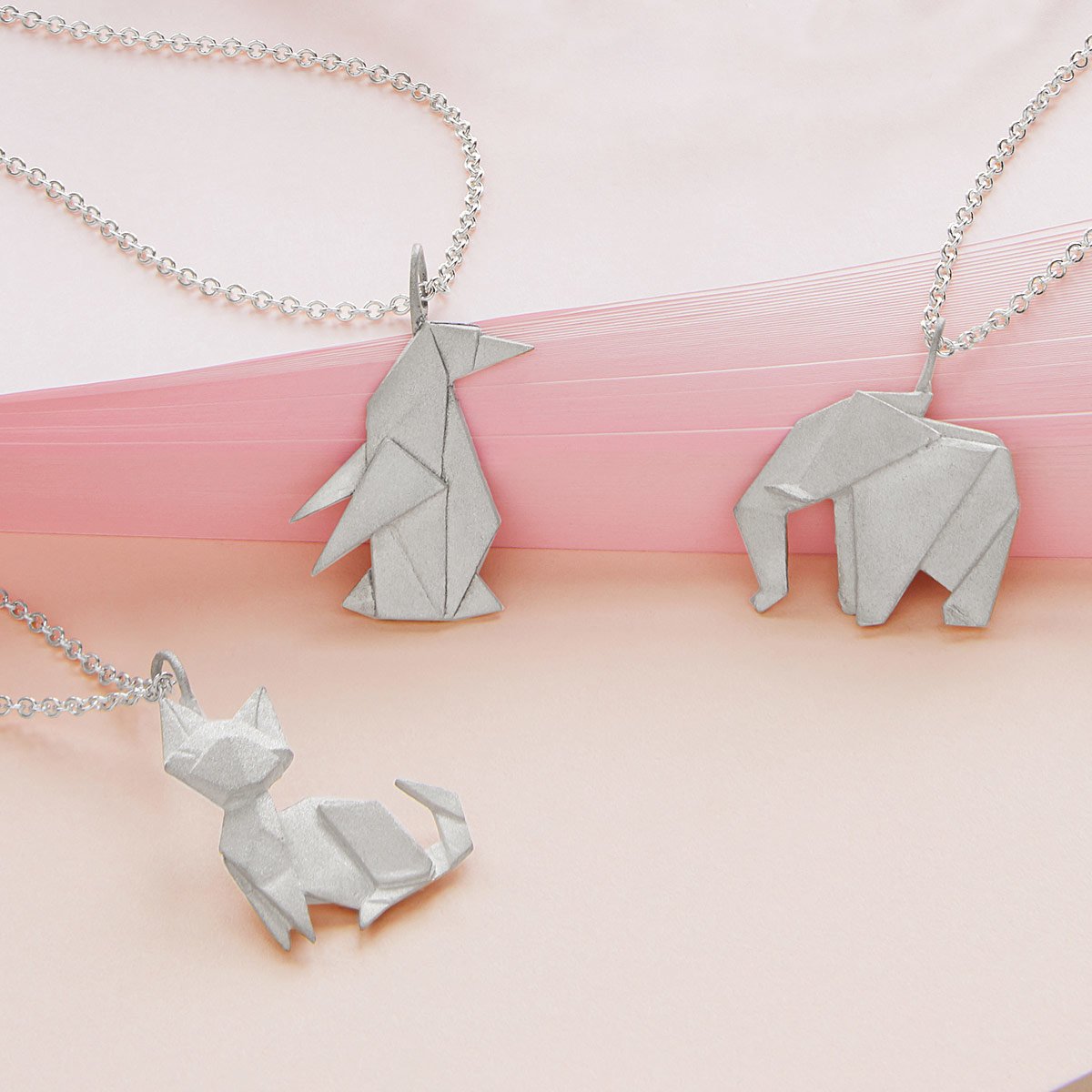 Sue Beatrice created these super fun origami necklaces exclusively for UncommonGoods. I love how each one is packed with personality. They bring me joy and make me smile.Sharon Hitchcock, UncommonGoods Jewelry Buyer

2. Bangles that let you keep those you love close to your heart. 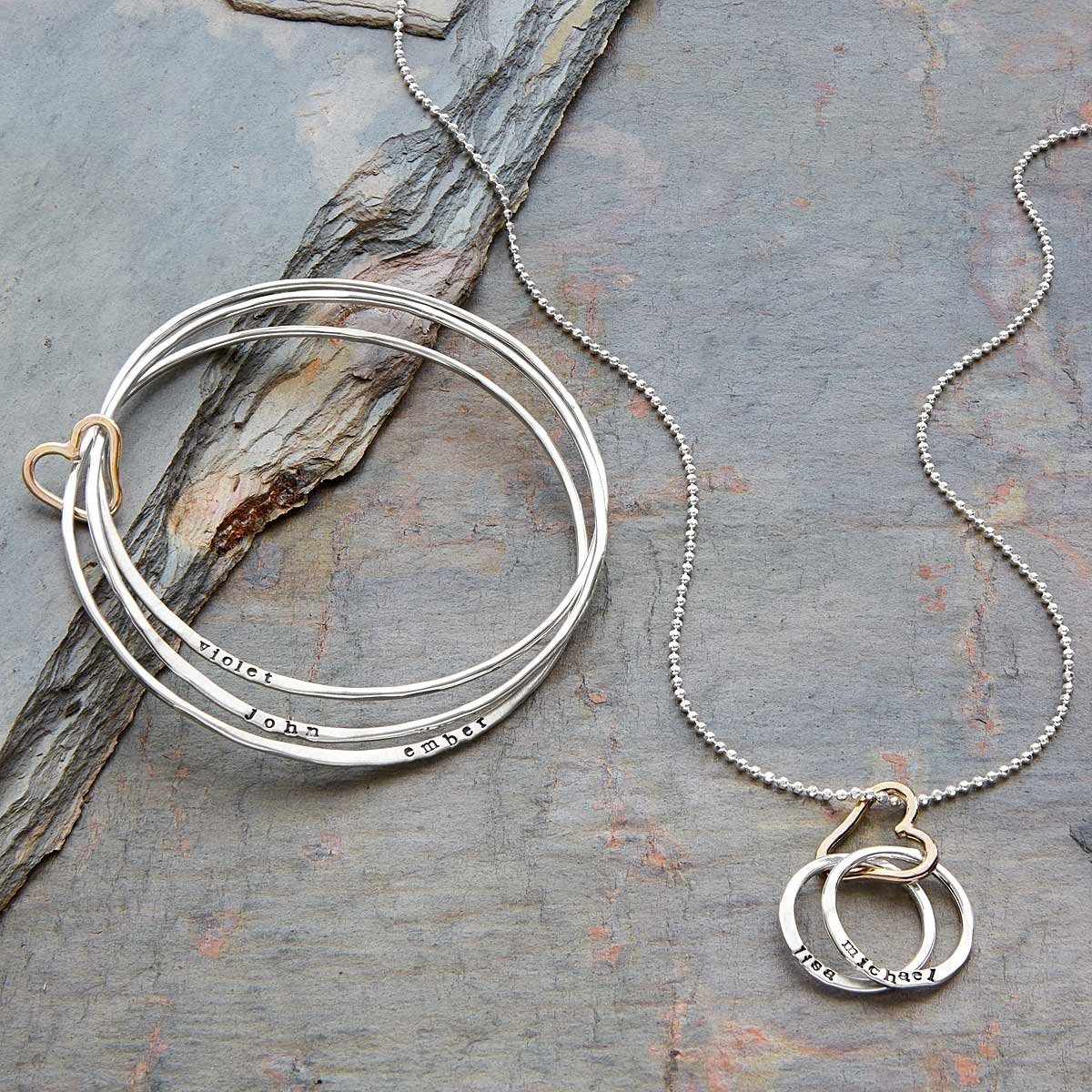 I’m crazy for these pretty bangles, each personalized with a name of a loved one, and linked together with a golden heart. 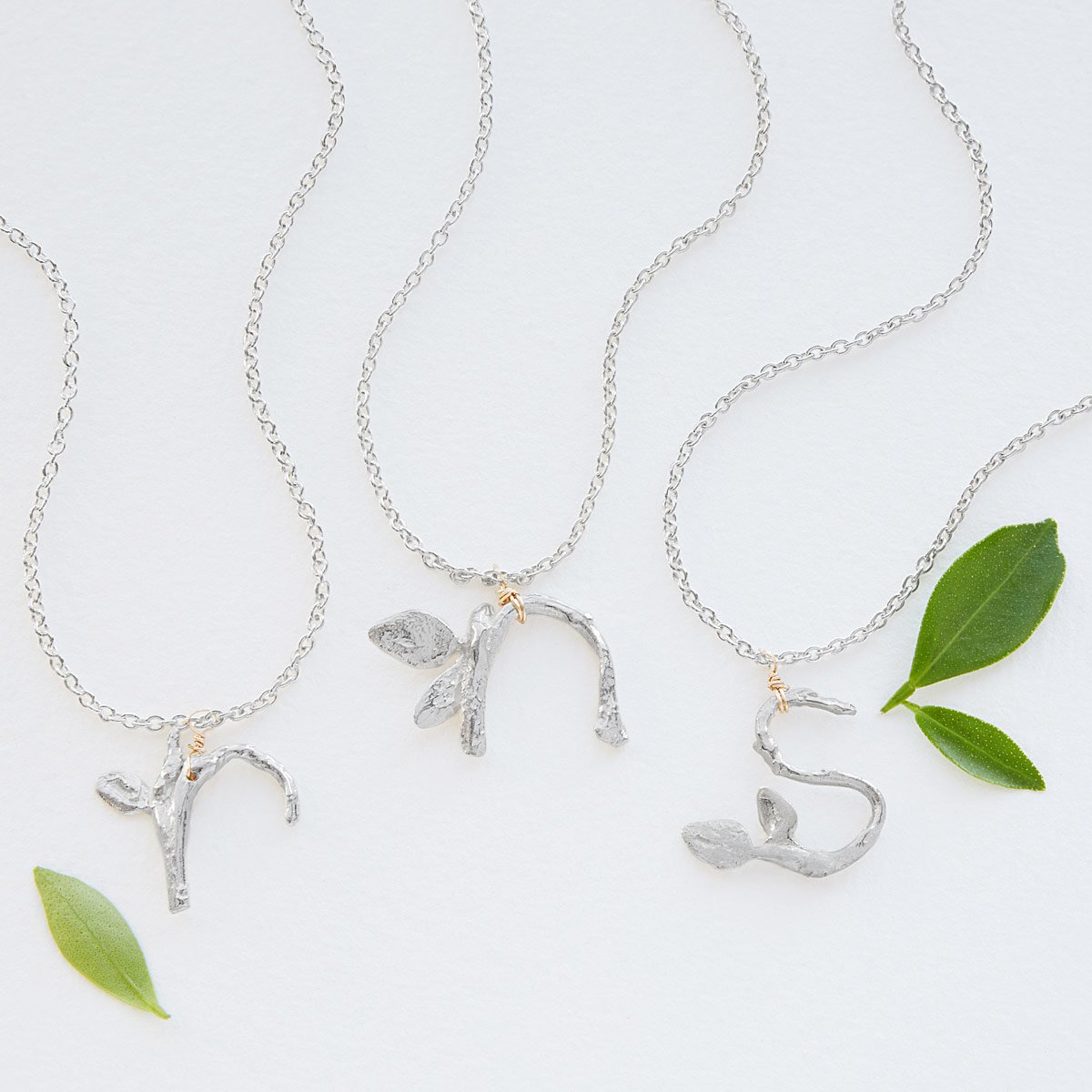 The designer of this collection, Nancy Nelson, is inspired by nature and collects bark and twigs on her walks. These lovely initial necklaces were cast from bits of twig and leaves.

END_OF_DOCUMENT_TOKEN_TO_BE_REPLACED

Celestial Style: How We Designed Our New Handmade Bracelets

Each bracelet represents one of the wonders of our solar system

I’m a life-long lover of outer space, and I love knowing that many of our customers are too. We’re always looking for creative ways to celebrate the wonders of the universe, so I was super excited when the rest of the team at UncommonGoods got on board with my planetary-inspired jewelry idea: our handmade Earth & Beyond Bracelets.

I knew from the start that I wanted to develop these bracelets in collaboration with Wakami, a company that empowers female artisans and their communities. Not only do they have an artistic vision that would help the idea come to life, but they also have a really great mission: connecting under-resourced communities to the global market. 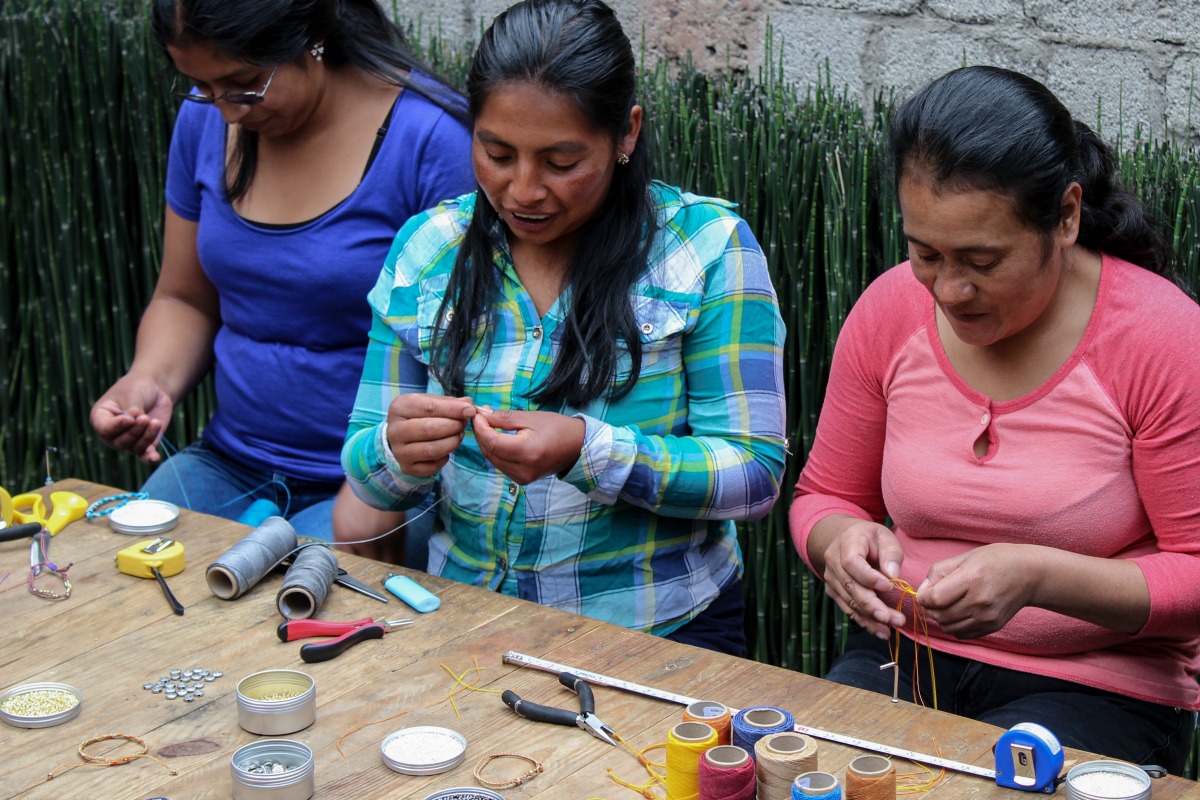 Guatemalan artisans at work crafting Earth and Beyond Bracelets , production and design photo courtesy of Wakami

Through Wakami, women in rural Guatemalan villages are able to generate income and access services (like professional training) that help improve their quality of life. Knowing that, we felt like the story, design, and craftsmanship of these bracelets would make a meaningful statement to anyone who wears them.

END_OF_DOCUMENT_TOKEN_TO_BE_REPLACED

Inside the Artist’s Studio with Jewelry Designer Sue Beatrice 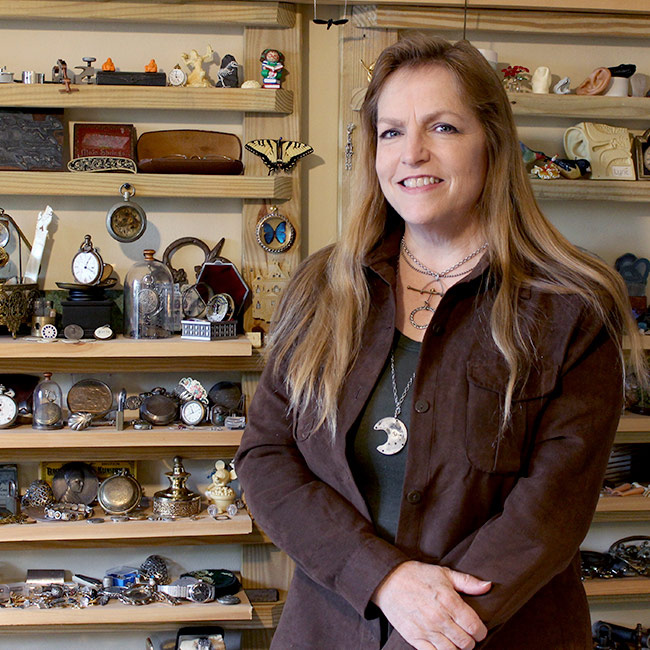 Have you ever looked inside of a modern watch? Despite being able to do much more than tell time, today’s “timepieces” look surprisingly simple when you crack them open. But, as artist and jewelry designer Sue Beatrice showed us, that wasn’t always the case. In fact, for centuries clocks and watches were loaded with teeny-tiny parts: wheels, pinions, bearings, and nearly microscopic screws. To say Sue is enamored with timepieces is an understatement. Her collection of antique clocks, watches, and their components is massive. When asked how many pieces she thinks she has, she can only reply, “Way too many to count.” So what does she do with all of those gorgeous gears? She turns them into remarkable little sculptures. Some of those sculptures even end up as eclectic-yet-elegant jewelry designs.

Sue’s jewelry isn’t all made from itty-bitty parts, but it is all lovingly designed with great attention to detail. Her Love “Nose” Necklace is so cute it’s pretty much impossible not to smile when you see it. Her Origami Menagerie Necklaces look almost like they could be made from actual paper. (Shiny paper; they’re sterling silver!) And her Stargazer Necklace captures a map of the constellations.  Of course, we carry a few of her delightful designs made from clock parts, too. 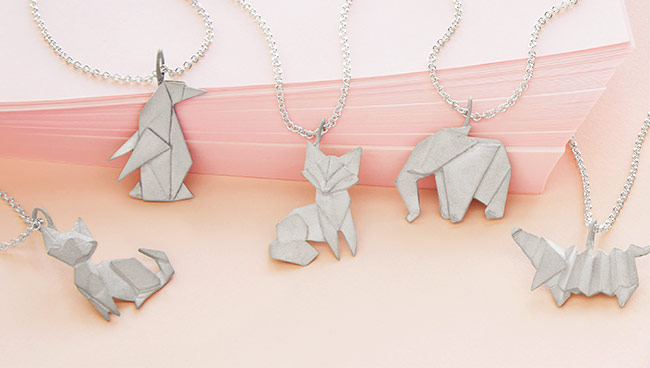 END_OF_DOCUMENT_TOKEN_TO_BE_REPLACED

On Saturday, January 21, 2017, women across the world marched together to protest injustice, lift each other up, and send the powerful message that women’s rights are human rights. Thanks to the combined efforts of millions of people, it was the largest single protest day in US history. From clever signs to a well-rehearsed song, marchers came prepared to fight for equality. As a plethora of pink hats stood out among the signs, songs, and crowds, it became clear that the hat would go down in history as a symbol of female power and unity.

Recognizing that the hat makes a strong statement, our Product Development team decided to incorporate it in a design that celebrates women. The Keep Marching Necklace is a wearable reminder that while there may not be an organized demonstration every day, the march for equality continues. 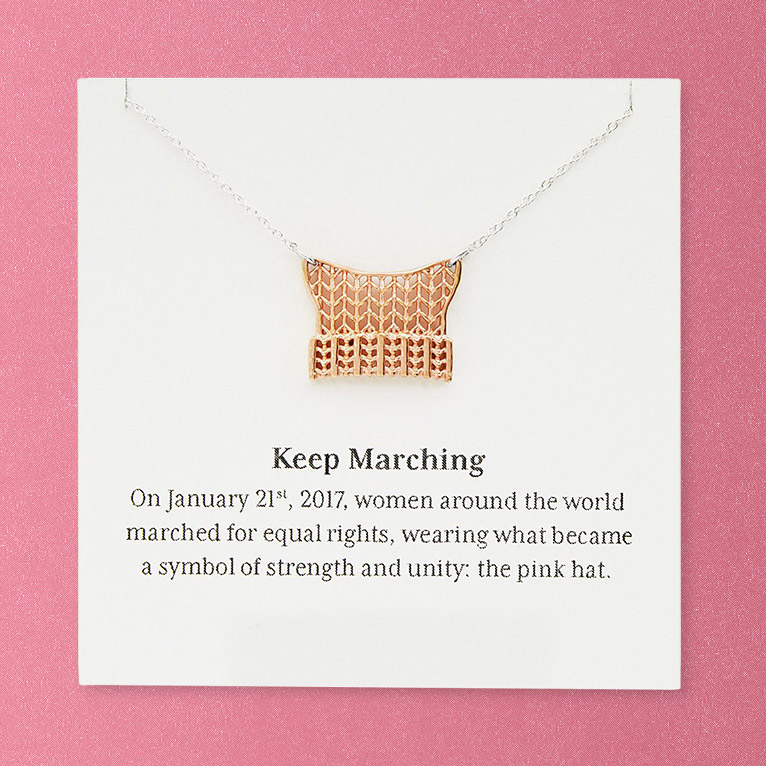 The necklace was designed by women who wanted to not only create a beautiful piece, but also develop a product that could make a positive impact. With that in mind, $5 from the sale of each Keep Marching Necklace supports our longtime Better to Give partner RAINN. Since partnering in 2010, we’ve donated over $350,ooo to RAINN–the nation’s largest anti-sexual violence organization–and hope to grow that amount when you select RAINN at checkout (our $1 donation is at no cost to you) and through givebacks on designs like our Keep Marching and Hope Shines necklaces.

As we approach a series of Women’s Marches planned for January 20 and 21, 2018, we asked the women behind this necklace to share what the pink hat symbol means to them and why they keep marching.

END_OF_DOCUMENT_TOKEN_TO_BE_REPLACED 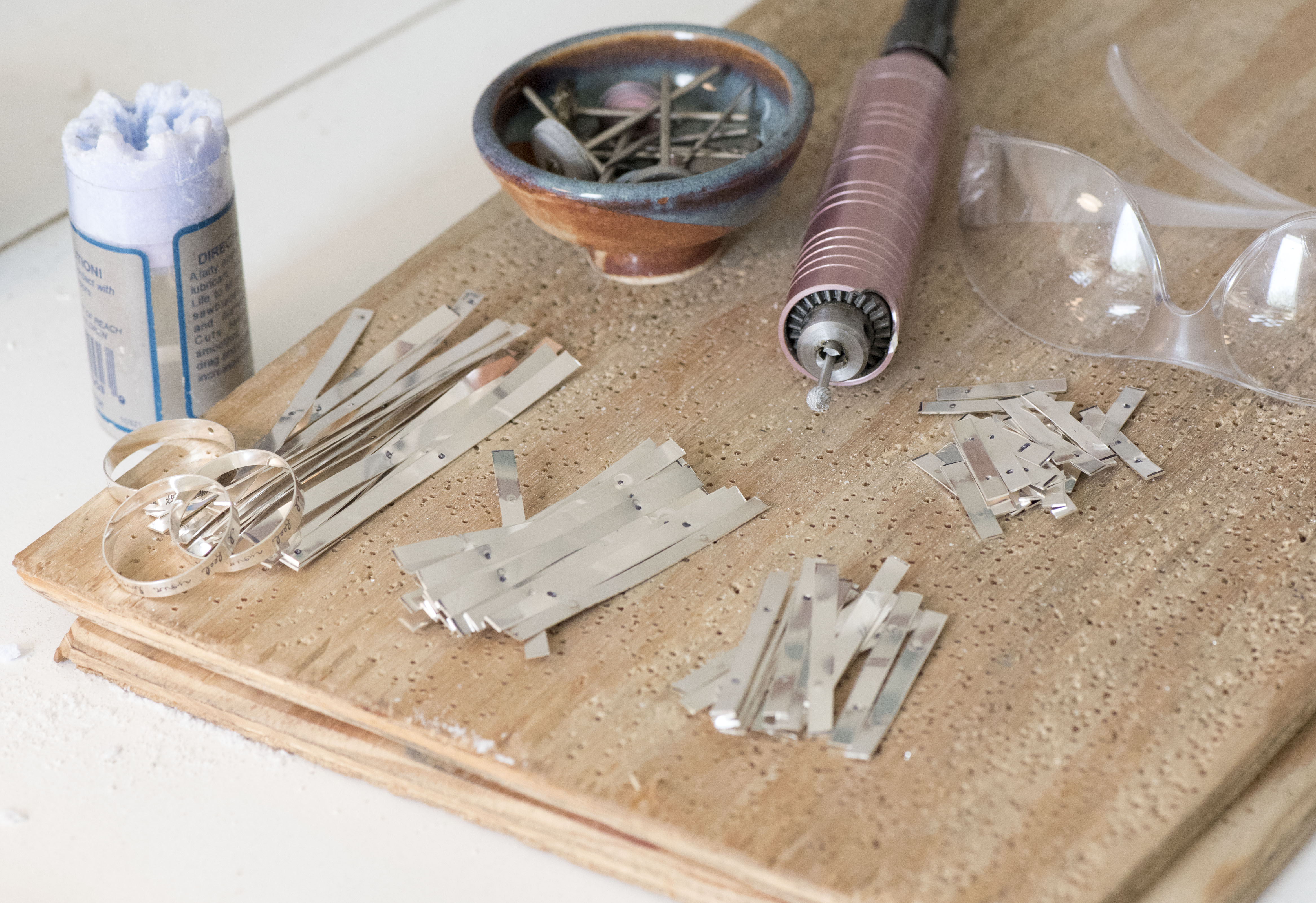 For two years, we’ve partnered with jewelry industry authority JCK to honor designers whose work ticks the boxes we value most, like “out of the box” (no pun intended) and “masterfully crafted.” We’re doing it again this year, and we’re calling on you—yes, you, assuming you’re a jewelry designer!—to submit your work to the 2018 design challenge for JCK Tucson, a curated destination for emerging artists and makers of finished jewelry and loose gemstones. This year, JCK Tucson will take place from January 31–February 3 at the JW Marriott Starr Pass Resort & Spa in Tucson, AZ.

Judging of the challenge, which is open to all Arizona Ballroom exhibitors, will take place on Friday, February 2 at 1pm. Judges will include representatives from UncommonGoods (hey, that’s us) and Overstock.com. The winner will receive a cash prize and a vendor contract with UncommonGoods.