It was a magazine article that drew Jeanne Kollecker to the arts. “About five years ago, I read an article on beach glass in Lake Erie Living,” she explains. Intrigued, the Chardon, Ohio resident decided to search for some herself on the shores of Lake Erie near her house. “I started hunting and it became an addiction. I knew right away I wanted to turn it into jewelry. You can find a piece and just say, ‘Wow, this would make a great pendant, or an earring,’” she says. She took classes on silversmithing at the local community college, and kept looking for beach glass (so named when it comes from fresh water; sea glass comes from salt water). “Then,” she says, “I found my first marble.” 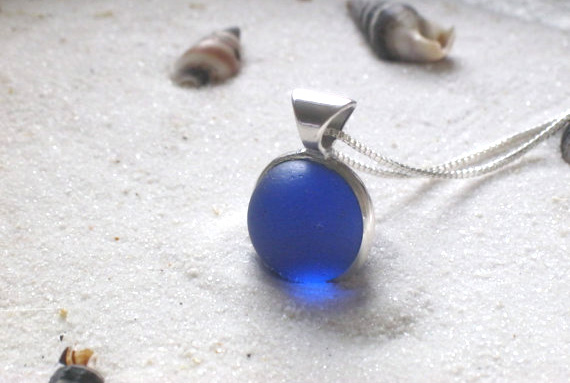 The beach marble, to the uninitiated, is more or less the holy grail of lakeside treasures — made all the more desirable by the many legends of the object’s origins (more on that below). “They’re such a rare find that when you find one, you do a happy dance,” says Jeanne, who manages a veterinary office by day. “The mystery of them is so much fun.”

As a proud member of The North American Sea Glass Association, she never alters the state of the marbles she finds. “I just wash them with warm soap and water.” The various colors, sizes and finishes of the baubles make each of her pieces unique. “Everything is one-of-a-kind” she says. “No one else in the world is wearing the same piece.”

She takes us through her process — and behind the mystery of the marbles. 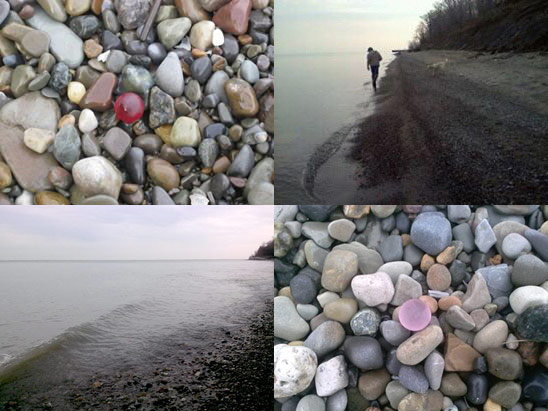 We have to know — where do beach marbles come from?
There are a couple different theories. One is that they used to use them for ballasts on ships. They would fill barrels with them, go pick up the cargo, then dump the barrels before they returned. They’re in all the Great Lakes and all over the world. England has the prettiest, they call theirs codds. In the Caribbean, they think rum runners may have used them.

Another theory is that some of them in Lake Erie are from a former marble factory in Akron, and they washed down the Cuyahoga River. There was also an amusement park in Cleveland called Euclid Beach on Lake Erie. Some people say the plain white marbles are from that — shooter marbles that the kids used to send into the lake. There’s a guy on Lake Michigan who finds a ton of marbles up there, and he thinks a lot of those come from shipwrecks. Lake Erie has a big history of shipwrecks too. There’s a mystery behind each one, which is what makes it so fun. You find one and you don’t know: Did this come from a shipwreck, or what?

What’s your harvesting process like?
I got my husband addicted too! We’ll go every Saturday or Sunday until the lake freezes over for four-to-five hours. It’s also our time together, you just get away from everything. Our cell phones don’t work there, so it’s nice because we’re there all by ourselves — no one bothers us. And we bring our yellow lab Willow. She loves it! She ate a marble once, but it came out the next day. 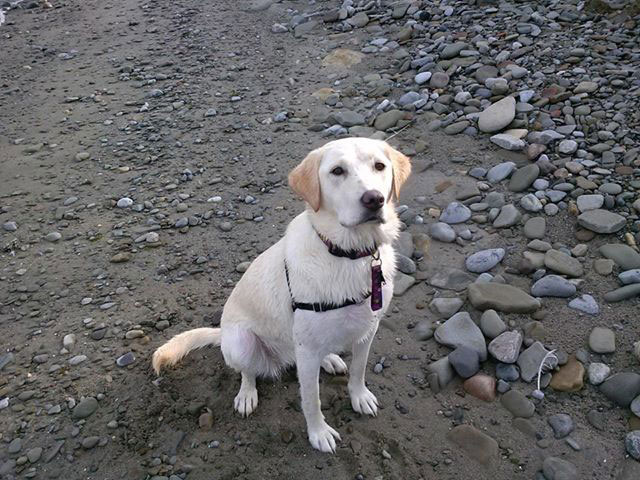 How many do you find at a time?
It depends on where we go. There’s one particular beach we like to go to, and one day there we found 24 marbles! Other days, we’ll find nothing. It’s very strange how they wash up. They’re more rare than beach glass. And it usually takes 30-to-40 years for them to become jewelry quality — the frostier the better. It means they’ve been tumbling around longer.

Does it get competitive among collectors?
Oh yes! Very competitive. People will always ask you [at a fair or convention] where you go. But I can’t tell people! My husband and I stumbled upon a beach where no one else goes, and that’s where we find most of them. You have to go through the woods and climb down a cliff. There have been some situations where I’ve said, I can’t believe we’re doing this — this is dangerous! But it’s a constant treasure hunt. Sea glass is becoming huge now. My husband made me a rake to go through the sand and pebbles, and some lady told me I was cheating! 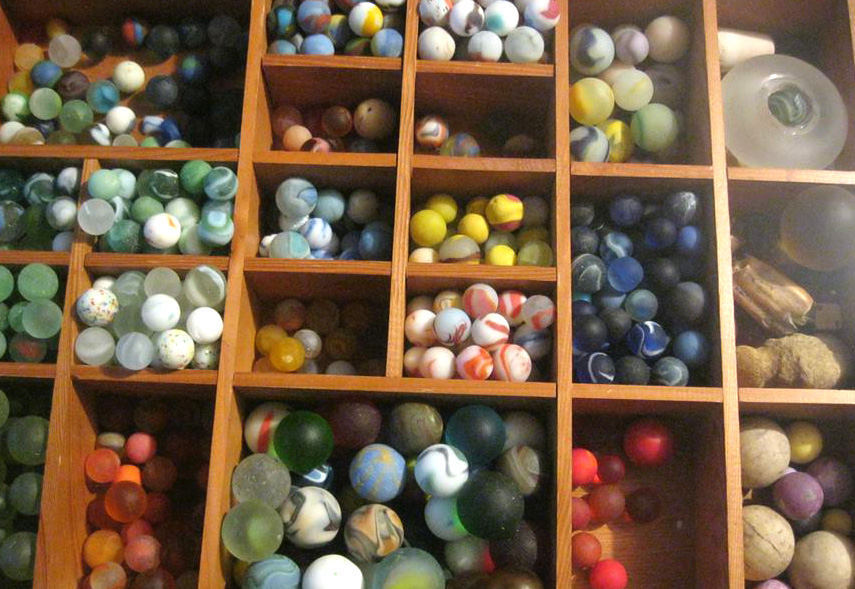 Once you bring them home, what’s your process for turning them into jewelry?
Usually I wrap all the marbles, fitting the silver around them. Then, I’ll match the bails I want to use for each piece — I use a few different ones. Then, I solder all of that and file it down. Last, I’ll sand down fine lines or scratches in the silver, then buff it, but not the marble.

Because of how I set the marbles, they can be seen from either side — everyone seems to love that. Some people will drill a groove when they make theirs, but you ruin the integrity of the marble. I don’t do that — I set the silver around it firmly. The marble is not drilled or cut. It’s not altered in any way, which people love. Sometimes, people will send a marble they’ve found to set, and I’ll do a custom order.

What’s your studio like? What tools do you use?
My studio is in a room in my home. I have two workbenches and another table where I do my shipping from. My dremel is my most important tool. That’s what I use to buff and cut my silver and drill the glass when I make earrings. When I’m working, I lay all my pieces of jewelry out. I guess I love to look at all of them together. I can pair up earrings that way, too, to see what pieces of beach glass go together. Or the marbles I pull out to make pendants or bracelets. 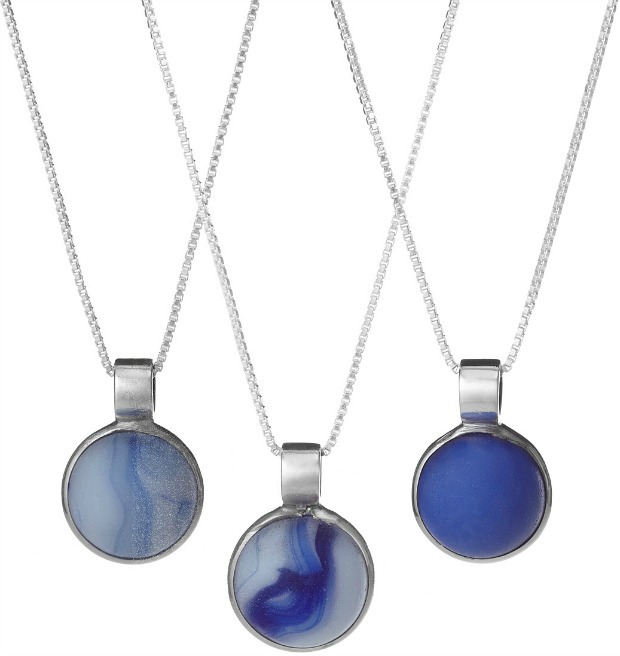 What’s your favorite part about making beach glass and beach marble jewelry?
The positive feedback you get from each piece you make. To see someone else wearing it, or when they buy it from you and they love it. The satisfaction is like, Wow. It just makes me happy.

So you’ll keep hunting for the marbles and making jewelry?
Absolutely, it’s a very relaxing hobby. It’s the funniest thing, I grew up here and never knew about it, then I read the article and was like, ‘Wow.’ The fun part is that everything is one of a kind. Hopefully Lake Erie will keep spitting them up!