Inside the Artist’s Studio with Michelle Inciarrano & Katy Maslow 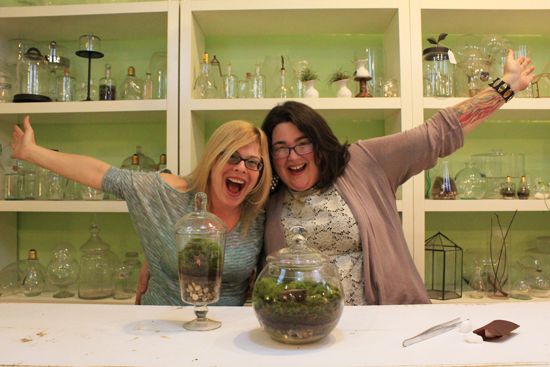 It only took a short subway ride to get from UncommonGoods headquarters to the Twig Terrariums studio in Gowanus, Brooklyn, but when I got there I was surprised at how far away I felt. I stepped into a tiny forest of laughs, puppies, and Lady Gaga songs (OK, there was only one puppy–but you get the idea). It was very clear that the Twig brand is all about the things BFFs Michelle and Katy love most – making beautiful and whimsical living environments inside apothecary jars, achieving their goals, and having fun. Growing up in Brooklyn, they were childhood buddies and reconnected at a friend’s birthday party a decade later. They recharged their friendship with regular craft nights, and when Michelle suggested they try putting together terrariums, Katy had to admit that she didn’t know what one was.

I could give one of Michelle’s famous Braveheart-like speech about how much fun I had in their studio, but I’d rather you hear about why Twig is so successful in Michelle’s own words. 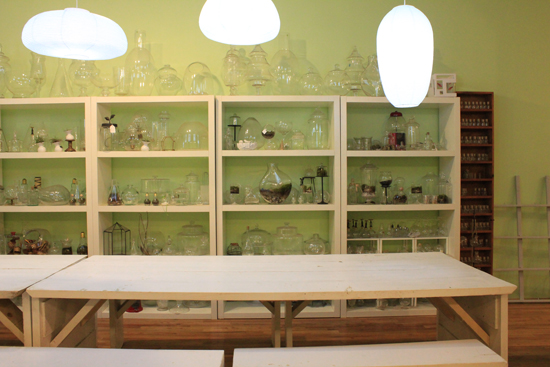 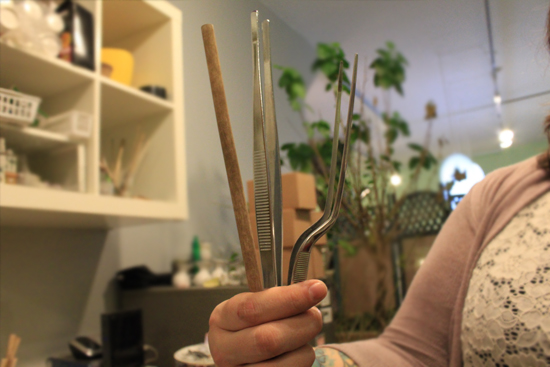 What are your most essential tools?
Our #1 best tool of all time is… wait for it… the “pokey stick.” Yes, a simple dowel. We absolutely love them.

Where do you find inspiration within this space?
Where do you not find inspiration? We are obsessed with making these miniature gardens – and do not understand any other way since we started. We simply cannot fathom an end to creating them and the possibilities are endless. We revel in them. 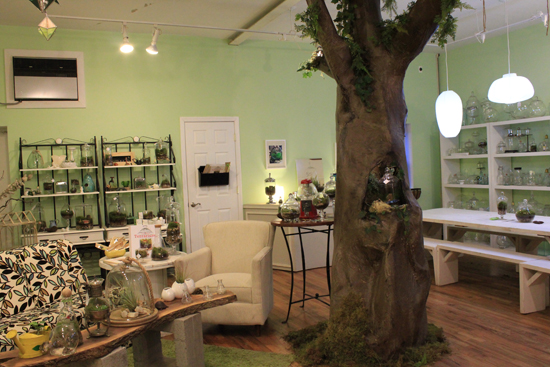 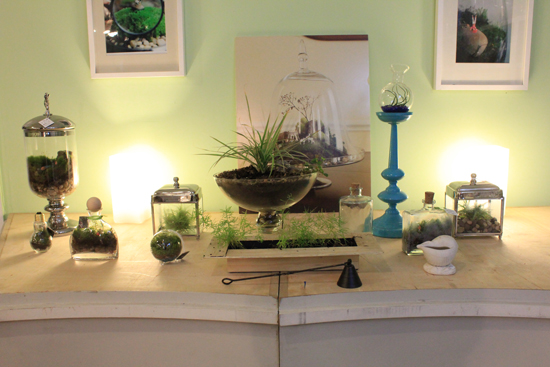 What was the toughest lesson you learned as a young designer starting a business?
Plan on needing more space than you think. Seriously. We moved studios 4 times in the last three years. Four times! And when you factor in that most of the stuff to be moved is made of glass, you understand our horror. Luckily, we made it through with surprisingly little broken, but jeez, that was a challenge. And then when you factor in the costs of moving, repairs, storage and design, the enormity of the situation becomes clearer. We still cringe when we think of it! But now we have 3,000 sq feet to play in, and although we still run out of room on occasion, we have an outdoor area to play in when we need a break. And did I mention the 14-foot paper mache tree we built in the middle of the studio? Yes, we now have a 14-foot paper mache tree!

What advice would you offer the you of 5 years ago?
I would write the “us of five years ago” a novel! Seriously. A novel. There is so much I’d like to say, but if I had to cut it short, I’d reassure myself by saying that everything is going to be okay, and to stay focused. I’d reassure Katy, too. We worry a lot. 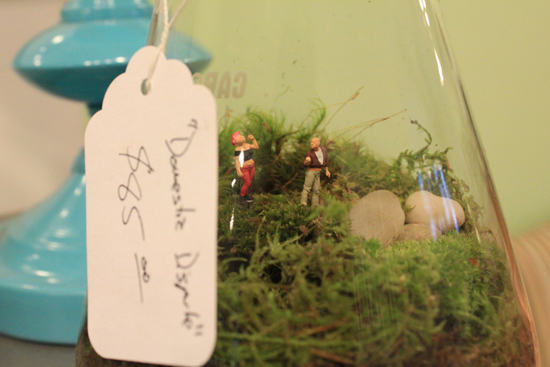 How do you set goals for yourself?
I mind-map with Katy for all long-term goals – this is where we discuss the new things we want to do and create, then break them down into short-term goals, then break those down into to-do lists.

How and when do you decide to celebrate a victory?
We celebrate everything here at Twig! The staff here are a small family. Or cult. We can’t decide. You can ask them yourself but I have a feeling they’ll say it’s a cult. We all believe in the team “work hard/play hard” philosophy, so while we are happy to have a Mimosa Monday, we may have had a late Friday. We are all self-driven. And finishing everything we had to do on Friday is a victory. It’s usually an impressive list. Taxes are a victory. So is being featured in a magazine, or a wonderfully fun event at New York Botanic Gardens, or winning an award (or four) at the Philadelphia Flower Show. The only rule is that we party after the work is done, but one of my favorite things to do during a long (or particularly packed) day is surprise everyone with a picnic style bbq feast on top of our picnic tables (underneath our paper mache tree, of course). Ribs, fried chicken, mac n cheese, creamed spinach… you get the idea. 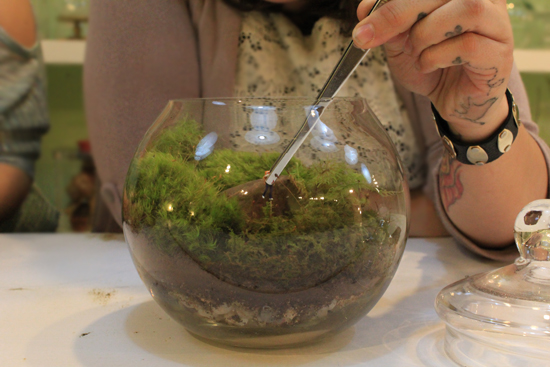 Putting together the Unchartered Territory Terrarium. 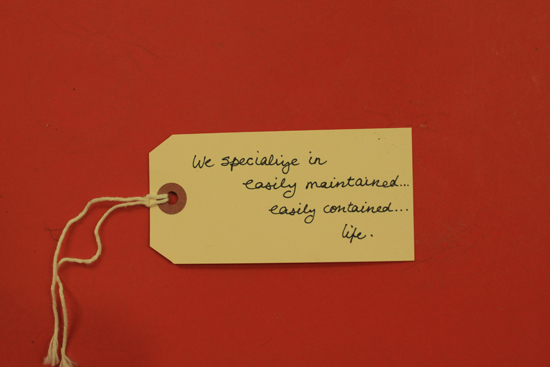 What quote keeps you motivated?
Katy and I are both English majors (hers in poetry, mine in fine art and classic literature). Never ask English majors for quotes. We’ll inundate you. We can’t help it. There are too many.

Instead, Michelle and Katy shared Twig’s motto “an easily maintained, easily contained life”, something that describes their work ethic as well as their terrariums. They believe that being maintained and contained includes strong goal-setting and super-sized list making–but also playing as hard as you work.

How do you recharge your creativity?
Oddly, we argue. Then we cry. Then we hug. We are happy. Then we create. This happens only every four months or so.

Where does down time fit into a day in the studio?
That’s the thing; there isn’t much down time here during the day. We are a growing a small business here! But once the day is done, there is always beer in the fridge, chips and dip laying about, and stories to share. 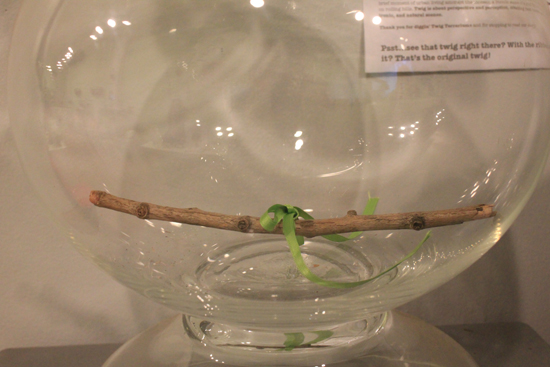 Michelle and Katy sat in Prospect Park one day trying to figure out what the name of their creative company would be. The mulled over many choices until Katy reached down, picked up what she refers to as the most perfect twig she has ever seen and made one simple suggestion that stuck. That fateful twig now rests inside this antique apothecary jar in their store. 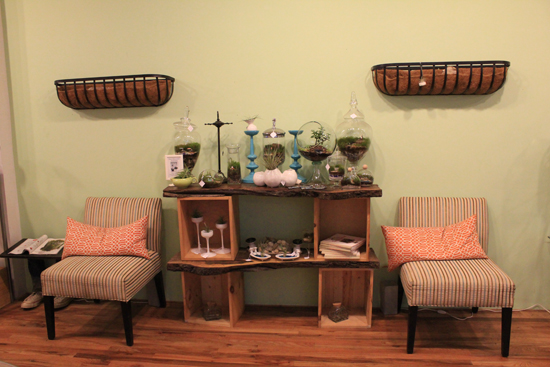 Where does collaboration come into play with your craft?
We collaborate with a few glass blowers to design pieces for us, as well as visualize our designs. We love it!

After spending an hour or so with Michelle and Katy, it was really easy to understand why their terrariums are so popular, why the press can’t stay away, and why fans flock to their studio for workshops and classes. They are all about having fun and getting the work done – especially the really fun work.

A Year’s Worth of Winning Designs