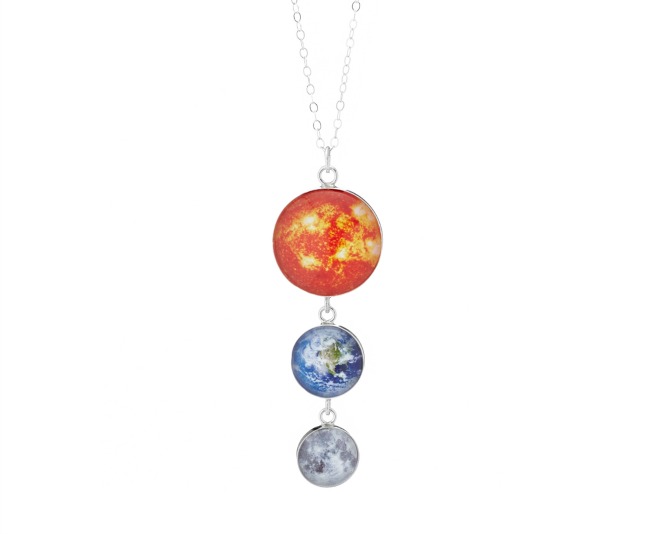 Here’s a secret weapon word for serious Scrabble competitors: syzygy. The shortest word to incorporate three y’s, it’s also a term shared by poetry and astronomy. For poets, the phenomenon takes two forms: phonetic syzygy (similar to alliteration but including sounds within words), and metrical syzygy (the repetition of rhythms in the meter of the poem). For astronomers, syzygy is shorthand for the straight-line alignment of celestial bodies in the same system—a line-up of Jupiter and Mars, for example. But to understand why poetry and astronomy share this weird word, we need to look at its etymological root. It enters English via Latin (suzugia) from the Greek syzygos, meaning yoked or paired. From there, it was broadly applied to describe linked things in literature, astronomy, and other fields. Lest you think that applications of the term are rare and unrelated across these fields, you’re witnessing an example every time you look up at the full moon. And what could be more poetic than that?

Uncommon Knowledge: Was the Night Before Christmas a Shuttered Affair? 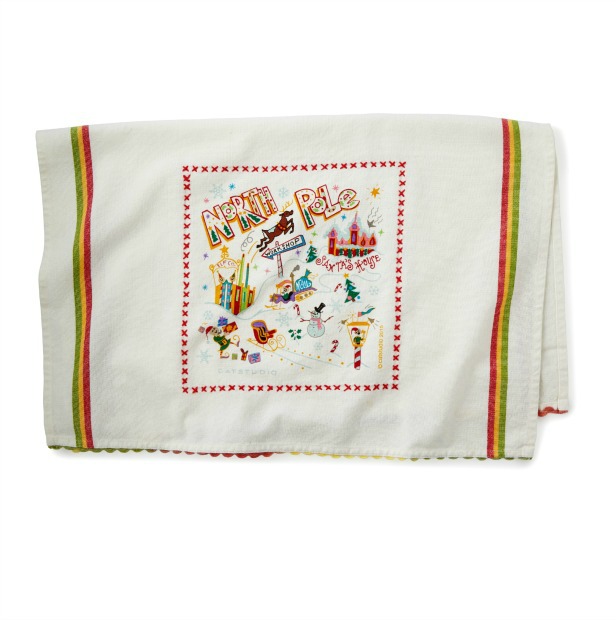 ‘Twas the night before Christmas, when all through the house…Clements Moore’s classic poem, “A Visit from St. Nicholas” paints a picture of a holiday house as quaint as a Currier and Ives scene. But have you ever wondered what house might have inspired the setting? The poem actually offers a clue in its description of the window treatment, of all things:

Away to the window I flew like a flash,

Tore open the shutters and threw up the sash.

Hold on, Santa—shutters and then sash? That means the shutters in this house are on the inside. Shutters, both exterior and interior, were common in early nineteenth century houses when the poem debuted, but the interior shutters suggest one mansion in particular: Constable Hall in Northern New York. Turns out that Moore was a cousin of the lady of the house, Mary Eliza Constable, and he visited her there. So Constable Hall is a likely candidate for the house St. Nicholas visited that snowy Christmas Eve. But to be fair, in the days before Santa Tracker, his route was anybody’s guess.

This Spring we hosted a contest advertised in our catalog for our most talented customers. The contest was a call for a haiku about a bike in celebration of our new Bike Tote.

To announce the winner, and since it was so hard to decide on one, we wanted to share our favorite entries with you!

4. O the dreaded hill, / you seemed so small from afar. / I have conquered you.
– Renee, California

3. Suspended in the rafters, / my bike hangs like a bat. / Lately I grow fat.
– Scott, New Jersey

1. Two-wheeled beloved, / time machine on which I am / always young, flying.
– Erica, New York Our winner!!

Thanks to everyone who participated by crafting a 5-7-5 masterpiece. To find out about our future contest, check out our catalog or follow us on Facebook.

Luck of the Limerick Contest

We can’t be modest when it comes to our emails. Let’s face it, they’re awesome.

This month we want to give you the chance to get in on all the fun of creating one of our emails by helping us write a Limerick about one of our products. Here’s the contest: Write a Limerick for one (or all) of these four products. If we pick your poem, you’ll be featured in an upcoming email and win the item that inspired you! 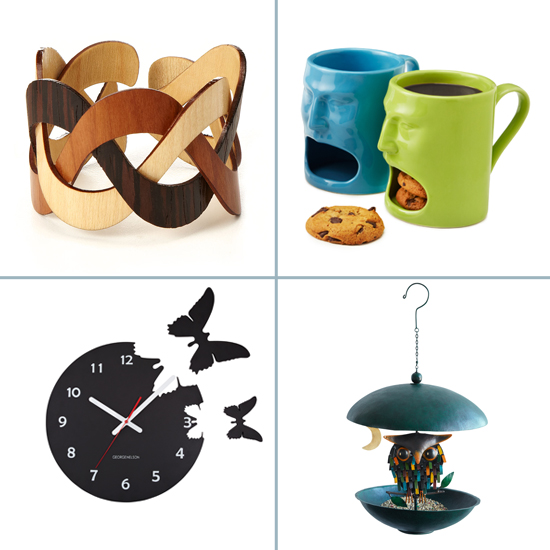 Warm or Cool Face Mugs Bring some color to those cheeks with this customer favorite!

Butterflies Pop Out Clock Time flies when you’re watching it pass on this dreamlike clock.

Spiky Owl Bird Feeder Day or night, this charming feeder is bound to be a hit–and a hoot–with backyard birds. 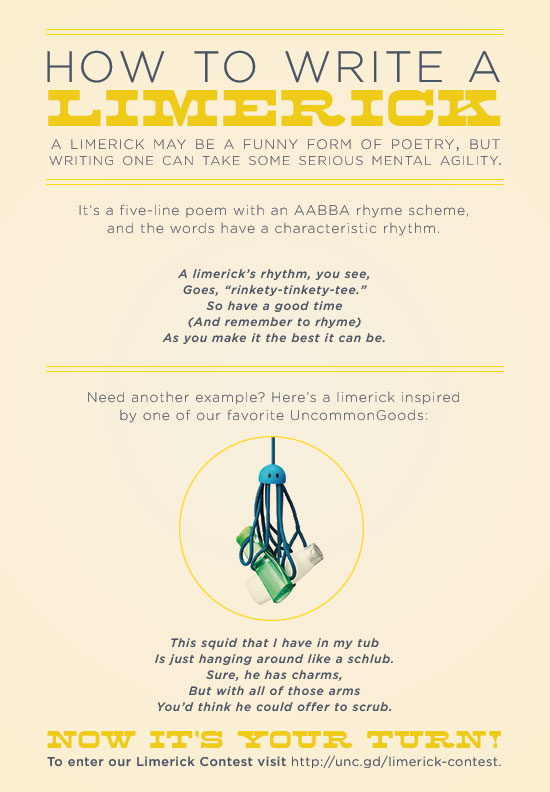 UPDATE – To find out which limreicks won our contest, check out our email on March 14. Sign up for our emails here.

When we announced our haiku contest, we knew our clever readers would present some great poetry, but we were blown away by the number (more than 250!) of uncommonly creative submissions we received!

The winners earned spots in our most recent email and took home the products they praised in their 17-syllable poems. Only one poet could win in each category, but we’re pleased to share some amusing honorable mentions. 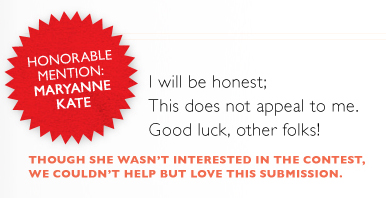 We’re glad MaryAnne Kate took a moment to show off her haiku skills, even though she wasn’t interested in any of the prizes!

We also received this haiku by Carol Thurman after the contest.

We’re sorry to hear that Carol didn’t know about the contest. As you can see, she definitely has haiku skills! But, you never know, she may get another chance. We had so much fun reading everyone’s haiku, we might just have to hold another contest in the future.

As bloggers for The Goods, we also got a chuckle out of Nate Biddick’s clever name drop in his poem about the Tipping Teacups.

And Diana McCartney’s haiku made us thirsty.

One cup black or white.
Hot, green, black or chamomile.
I like mine at night.

But Reanna Reiner took the prize by making us long for tea time. 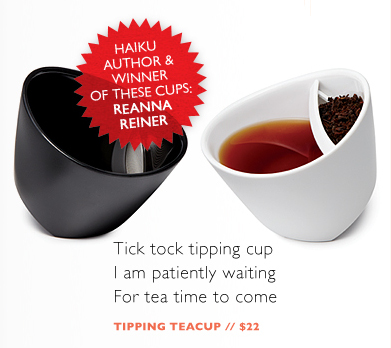 While Reanna will have a new cup at her table the next time she sits down for tea, the winner of a new set of building blocks, Amanda Francis, is enjoying another table. She submitted this very uncommon entry:

“Yes! That’s a haiku!” She explained. “Here it is translated into the elemental symbols:” 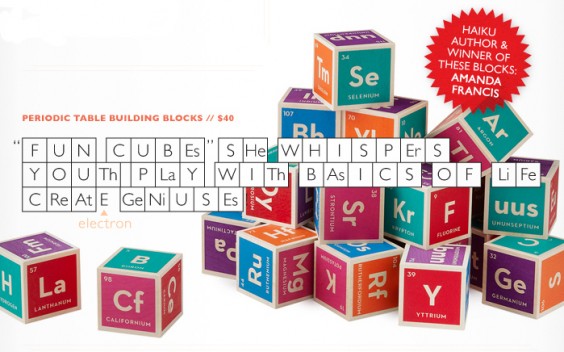 The last line of Amanda’s haiku is quite encouraging, but some folks chose to end their poems with punchlines. Kelly Brooks’ Owl Nightlight haiku started deep, but made us laugh in the end.

Oh, wise one who hoots
Light the pathway to the truth.
Or to the bathroom.

And Eve Schuyler’s winning words made us thankful for safe, well-lit walkways. 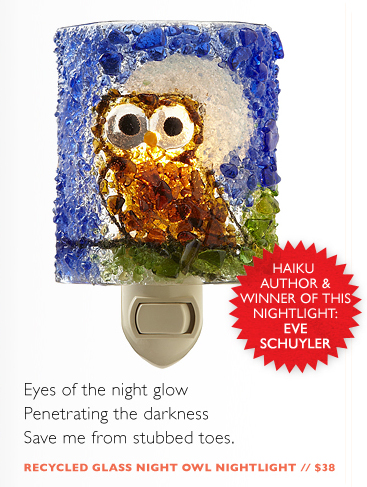 We also received some humorous entries for the coveted Stump Ring, but many poets took the sentimental route.

And Darla DeNyse’s haiku captures why the ring makes a great gift for a loved one.

But Kat McNally’s winning haiku really captures what this beautiful design is all about. 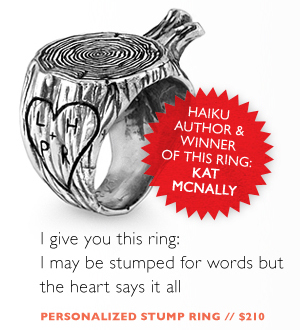 Kat’s salute to the Stump Ring and the other winning haiku are just a few of the clever poems featured in our latest email. You can click here to read a variety of verses, or sign-up to have our uncommon emails sent right to your inbox.