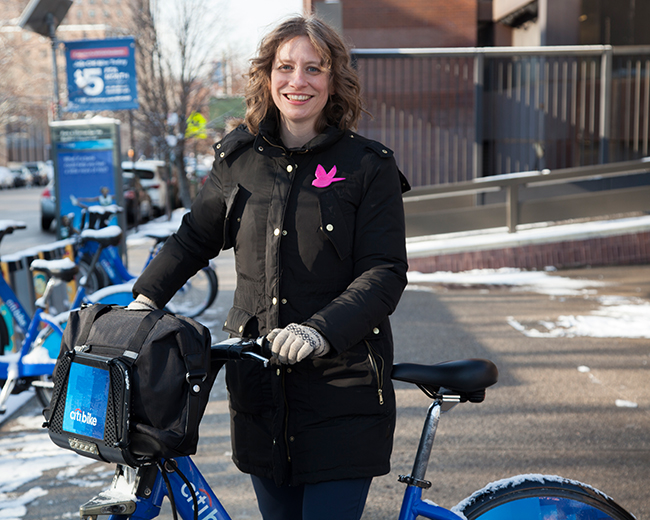 Maria Boustead hitches a ride with CitiBike on a snowy Brooklyn day; photos by Rachel Orlow

In a city like New York, biking can be quite intimidating. Big streets. Bigger puddles. Drivers with no regard for human life. We’ve got it all! But some—many of whom are braver than I—have long sung the praises of our bike share system, which isn’t the only environmentally friendly transportation scheme of its kind. With bike shares cropping up in cities around the country, like Boston, Philadelphia, and Washington, DC, biking’s barrier to entry has lowered further than ever before, allowing commuters nationwide to leave their cars in the garage at last. This rings especially true in smaller cities, where the luxuries of good public transport, like subways and express buses, often don’t exist at all.

That’s all well and good, but industrial designer and longtime bike rider Maria Boustead noticed one teensy problem when she first hitched a ride using Divvy, the bike share system in her native Chicago: The front basket just. Didn’t. Work. As a designer of fun, yet functional accessories for cyclists, however—especially women—Maria was uniquely equipped to design a solution. The result? A bag designed especially for bike share bikes, equipped with more bells and whistles than you can shake a stick at. (OK, OK, no literal bells.)

We stopped by Maria’s workspace on the border of Bushwick and Bed-Stuy here in Brooklyn, NY, and spoke with her about the story behind the Bike Share Bag and what sustainability means to her. Read on for more. (As for us, we’re off to snag our first Citibike membership. Be back in five.) 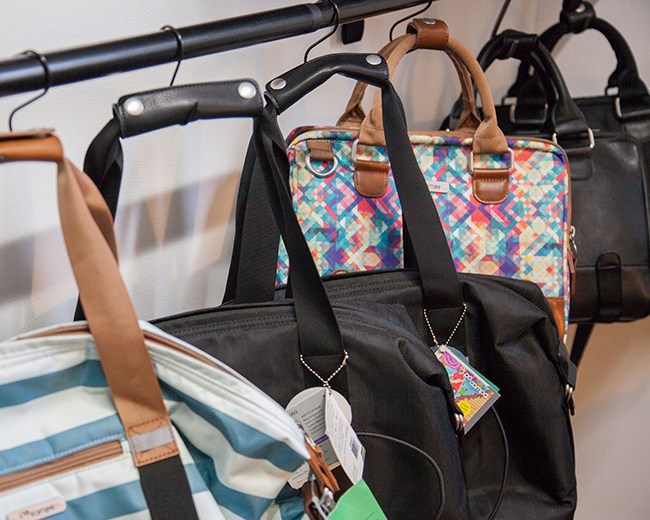 You’ve been designing bags for urban cyclists since 2009, but the Bike Share Bag is a relatively recent addition to your repertoire. How did you come up with the idea, and how did you decide to move forward with it?

I’m a huge fan of bike share systems because they make it so easy for people to get a feel for the joy of biking around their city without having to invest in a bike or much gear. When Divvy launched in Chicago, where I was living at the time, I couldn’t wait to get my membership and start using the bikes—I would joke that I went from having two bikes to having 2,000 bikes. I loved the convenience of not having to worry about locking up a bike, and became enthralled with how bike share opened up the possibility of one-way bike trips. That’s really a game-changer! But I also experienced a problem familiar to a lot of cyclists: it was hard to carry things on the bikes.

The style of bikes found in large cities like New York and Chicago have an odd front basket that is open on three sides, so things are constantly falling out or just plain won’t fit. I started my business because I couldn’t stand wearing a backpack while biking—you get so sweaty and it can be uncomfortable if your bag is heavy. Yet there I was, feeling like I needed a backpack on bike share and that’s when I realized that I needed to fix that problem. I decided to create a bag specifically for these bike share bikes that would help people confidently carry what they need so that they could use the bikes for more types of trips. 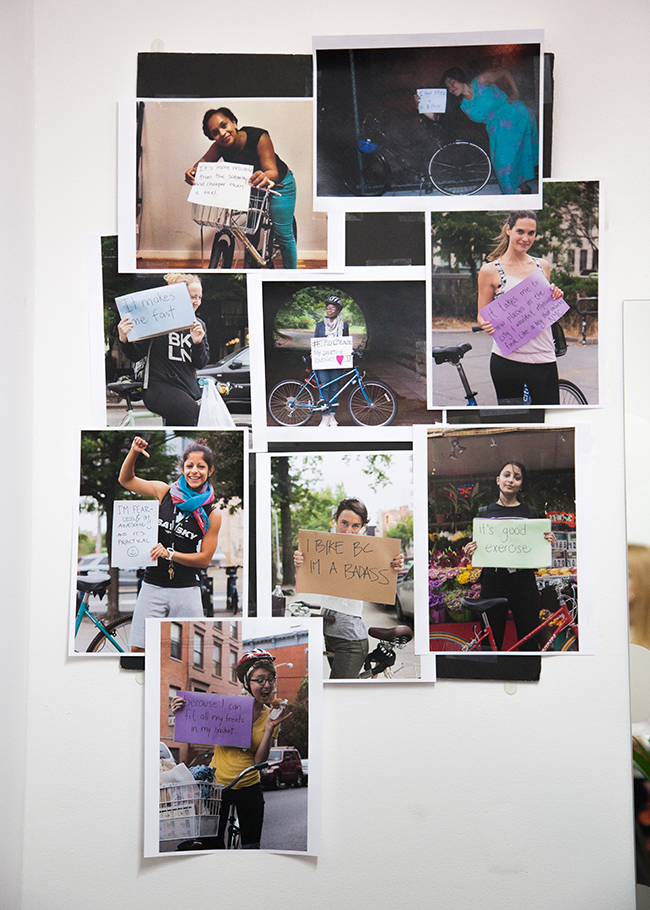 How did you first get into biking?

I started biking in college, but it wasn’t until studying abroad in Germany that I really saw how biking could be a lifestyle and not just something a poor college student would do. In Germany, it wasn’t just students biking to class but also moms biking with their children, businessmen biking to work, senior citizens biking together in the park… it was really inspiring. When I returned back to Chicago, I resolved to keep it up, even though not too many people were biking for transportation at the time. The bike infrastructure has gotten better and better and I still rejoice with every new bike lane that gets built!

Describe the making of the Bike Share Bag for us a little. How did you decide what features to include? How many versions did you test before settling on your final product?

I always start my design process with thinking about how exactly people are going to be using a bag, so the first thing I did was talk to Divvy about what they knew about their members’ riding habits. I learned that their users taking the most frequent trips largely used the bikes for commuting, so I knew that the bag needed to be able to hold a laptop and other items, like a lunch or change of clothes, that people normally take with them to work, plus organization for their wallet, phone, keys, and such.

The next challenge was figuring out how a bag could really quickly attach and detach from the bike. One of my favorite things about bike share is how EASY it is—you just insert your key fob, the bike pops out, and off you go. I wanted the experience with the Bike Share Bag to be just as easy. During my initial sketches, I zeroed in on these little knobs welded to the front of the basket. I sensed that figuring out a way to utilize them in my attachment method would be best, and I explored several options through sketching and prototyping to figure that out. 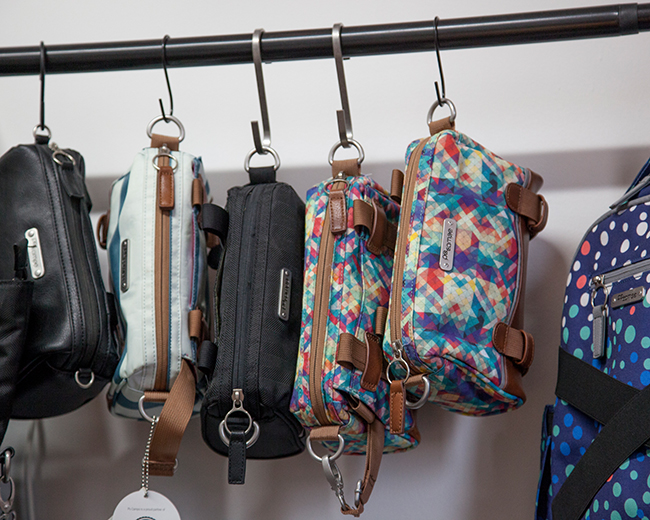 Of course the design process is never neat and tidy and my first few bike bags popped right out of the basket when I went over bumpy railroad tracks. (Here’s a video of me testing some early prototypes.) But I kept at it and finally figured out that bungee cords could wrap around the knobs to securely hold the bag. I was delighted at this solution because it was quick and easy as I had hoped, but also because it was so simple—which is what I really strive for in design. Plus, I have a thing for bungee, and I love that the bungee attachments are kind of multipurpose, in that you can slide things like a jacket through them when off the bike. The solution ticked a bunch of boxes for me.

As a real-life bike rider, what excites you most about the spread of bike share programs?

Bike share programs make biking so much more accessible to people. They lessen the barrier to entry because the bikes are readily accessible (depending on where you live/work of course) and you don’t need to invest in any gear to at least give it a try. The before and after of Divvy arriving in Chicago was very striking. Before Divvy, it seemed pretty rare that you’d see people biking in their normal clothes going at an easy pace. After Divvy, the bike lanes filled up with people that better represented a cross-section of Chicago. I truly believe that bicycling can help transform cities to help make them healthier and more equitable places to live, and bike share really seems to accelerate that transformation. 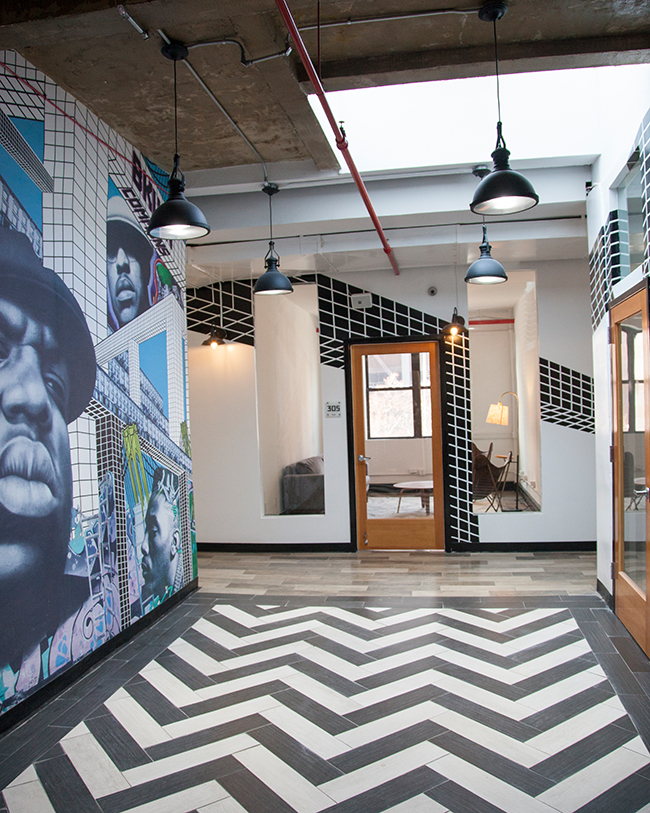 At UncommonGoods, sustainability is important to us, and we think the Bike Share Bag is an awesome way to make bike shares—an environmentally friendly alternative to, say, commuting by car—even more accessible to city-dwellers. As a designer, is sustainability important to you?

Yes! I come from a very waste-not/want-not family, so being a designer and micro-manufacturer who is constantly making things can be a source of internal conflict for me. I work to resolve that conflict by putting a lot of thought into the products that I make. I strive for all my bags to not only be unique but to fulfill a need in someone’s life that isn’t being met by anything else. Bonus points if meeting that need helps them live a more environmentally friendly lifestyle, which my bike bags certainly do. I can’t tell you how good it makes me feel when a customer tells me that she didn’t know how she could bike to work until she had one of our bags. That really feels like I’m making a difference!

You recently moved your HQ from Chicago to Brooklyn. What prompted you to make the change, and how are you liking it here so far?

I think the main reason was that both my husband and I were ready for a change of scenery. I am from Chicago originally and never really intended to live there my whole life, but the years go by… and it just starts to happen. We both really liked visiting NYC and I was excited to plug into the larger entrepreneurial community here. It seems like people don’t really “end up” in Brooklyn, but rather they move here to “do something.” Learning about people’s projects, their “somethings,” has been a true joy, and an inspiration. It kind of feels like you have the wind at your back. 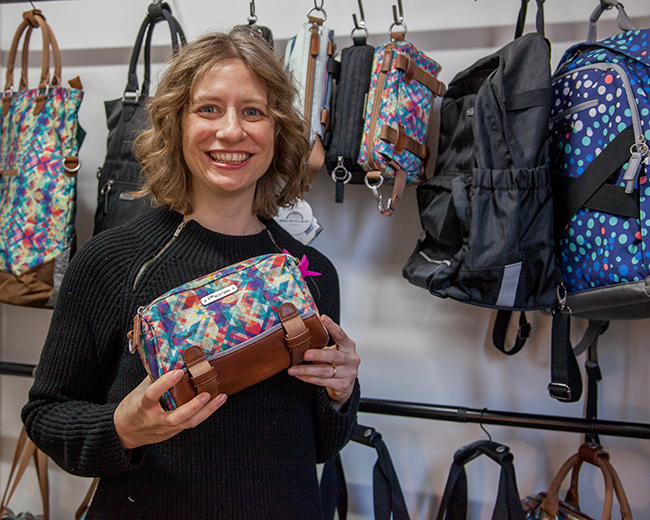 What quote or mantra keeps you motivated?

I like “how hard can it be” and “live and learn.” I hope those will be on my gravestone, as I feel like they’re my guiding principles!

Finally, what inspires you to keep creating?

It may be the designer’s curse, but I just can’t stop thinking of ways that I want to improve things, or thinking of things that I really think ought to exist in the world.

Pick up your very own Bike Share Bag here »