A Force for Good: Why We’re Doubling Our Donation to the IRC

As an independently owned business, we have the ability to support causes we believe in and to impact the world in a positive way–so each time you shop at UncommonGoods, we donate $1 to a non-profit partner of your choice through our Better to Give program. Although the donations are at no cost to you, your purchases have allowed us to donate more than $1 million to our partners since 2001.

Last summer, we were proud and honored to welcome the International Rescue Committee to the Better to Give program. Since June 2016, we’ve raised $57,000 (and counting!) for their mission to aid refugees and families afflicted by conflict around the globe. But there’s still work to do.

Founded in 1933 at the call of Albert Einstein, the IRC is at work in over 40 countries and 29 US cities helping people to survive, reclaim control of their future and strengthen their communities. Now, the IRC must confront major obstacles in pursuing their work. In response to the recent suspension of refugee resettlement programs, the IRC announced its first-ever emergency appeal for its US programs on January 29, 2017. This call to action focuses on supporting refugees who are already in the United States and supporting the critical services the IRC provides to ensure the newest Americans – most of whom are women and children – can take back their lives.

When the IRC announced the anticipated funding gaps for its resettlement programs in the US, we realized that it was a call to action to use business as a force for good. That’s why we’re making a promise to our customers this month: For every customer who chooses the IRC at checkout in February, we will double our donation (at no cost to you).

“We are honored and grateful for UncommonGoods’ increased support of our programs in light of the unprecedented challenges our US programs currently face. Not only is UncommonGoods’ donation going to go a long way in helping the refugees and immigrants whom we work with, but it also sends a message of positivity and welcome during a time when it is most needed.” – Shannon Paz, IRC Corporate Alliances Officer

This increased support will help the IRC provide refugee families – of all faiths and nationalities – with housing, cultural orientation, health care, education, employment, and other services that help them rebuild their lives in the United States. 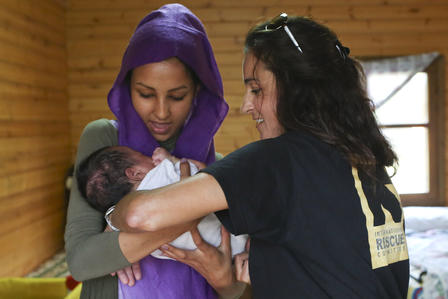 The IRC’s work helping refugees in the US certainly isn’t a new initiative. Since World War II, the IRC has resettled 400,000 refugees in the US, including Omar Almashhadani, who visited our office last summer to share his story. After describing his journey to becoming a US citizen and New York City resident, we asked him what he wanted Americans to know about refugees. His response: “When they come to the US, they’re looking to rebuild their lives that have been taken from them. It’s not their fault – they’re facing a crisis. We want to work hard and become a part of society, and we hope you will accept us.”

We are proud to support the International Rescue Committee. Please visit rescue.org if you would like to donate directly to the IRC.