Gift Lab: How to be a Happy Camper with the Portable Camp Grill and Charger 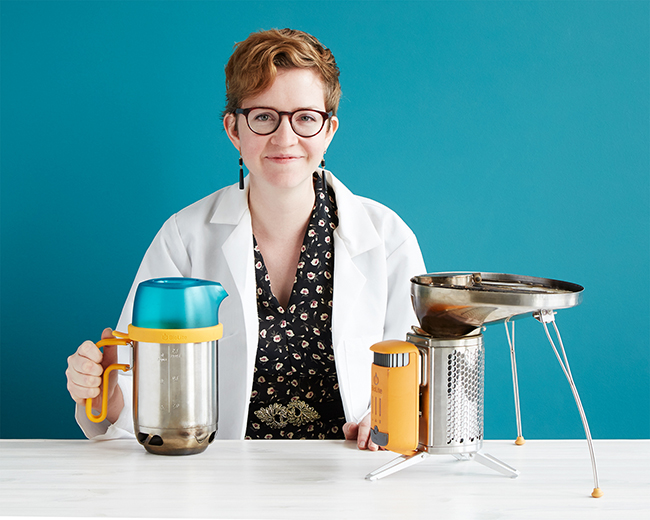 Food, Drink, and Garden Merchant Assistant Maia settles in for a wee bit of rustic eating. 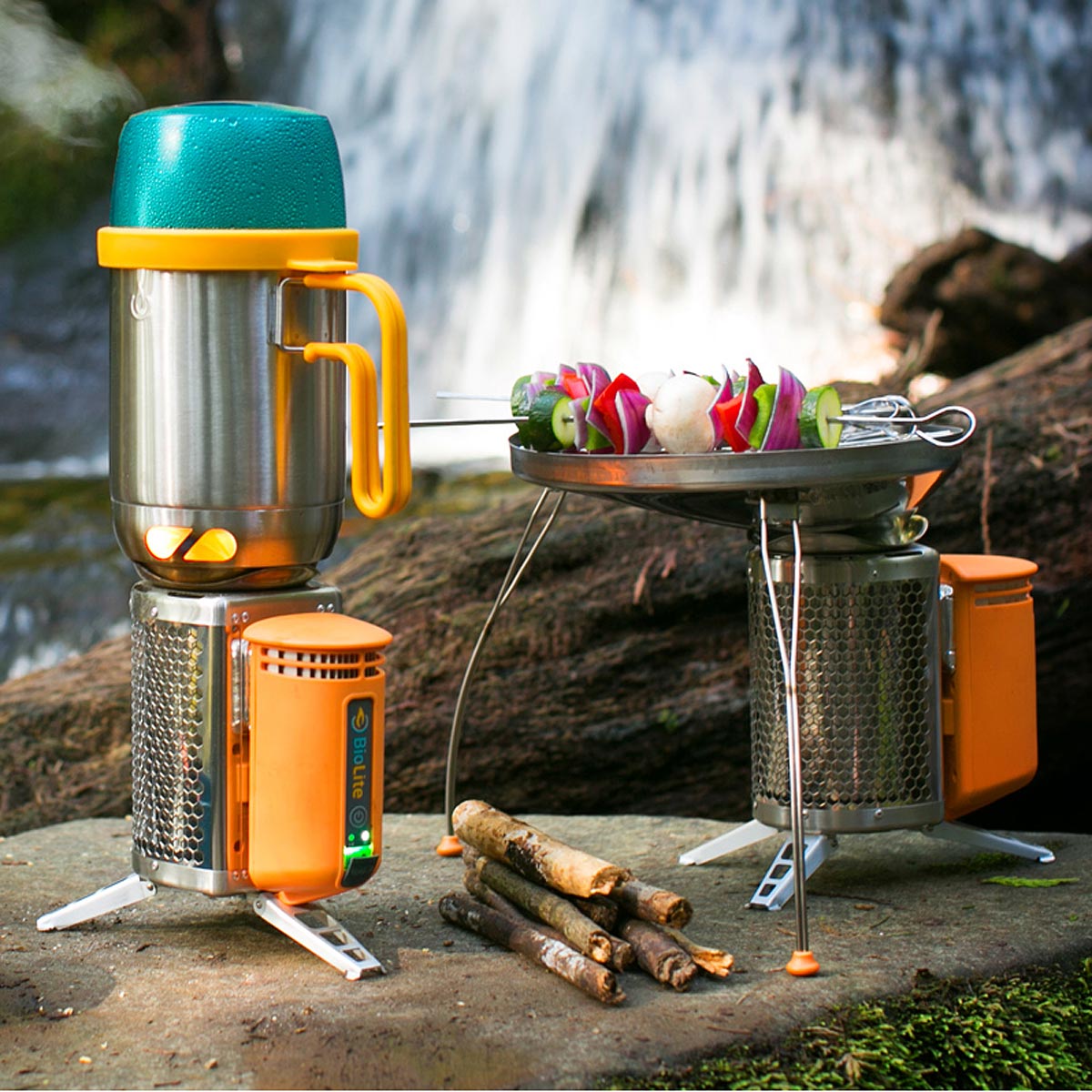 I was raised to be a capable outdoorswoman. I can set up a tent without once consulting the directions and identify edible plants and tubers in a pinch, but to my chagrin, I never proved to be a very good study in the art of fire-making. The last camping trip I organized, I managed to forget the matches and lighter at home, and thus served my fellow campers lukewarm pasta salad, sans pasta (so… salad) for dinner.

Pride badly bruised from this particular episode, I knew I needed to prove my mastery of this evolutionarily important human tool. Then it dawned on me—what more evolved a way to demonstrate such mastery than to use the newly updated Portable Camp Grill and Charger to not only boil water, but also grill veggies, power a flashlight, and charge a phone battery?! If such an invention didn’t scream high-minded evolution and mastery of the elements, I surely didn’t know what else could.

As luck would have it, I had already planned an upcoming weekend hiking and camping with a few friends and the “wilderness” of Long Island seemed an appropriate lab for my experiment. So, eager to restore my reputation as a backcountry culinary master and finally prove that I, too, was an evolved human who could make fire, I packed the Portable Camp Grill and Charger into my ginormous turtle shell of a backpack and headed off towards the shores of the incredibly appropriately named Fire Island National Seashore.

The “lab” itself was beautiful. Waves crashed on the shoreline and the blue sky stretched uninterrupted from horizon to horizon. A pleasant breeze played at our backs as we walked, and there appeared not a single other soul in sight down the long expanse of sand and trembling sea grass. We set up camp a couple miles down the beach and proceeded to spend the afternoon alternately swimming, struggling to find shelter from the omnipresent flies and sun, and taking long, languid walks along the shoreline while pretending to think deep thoughts (as one does while in nature). 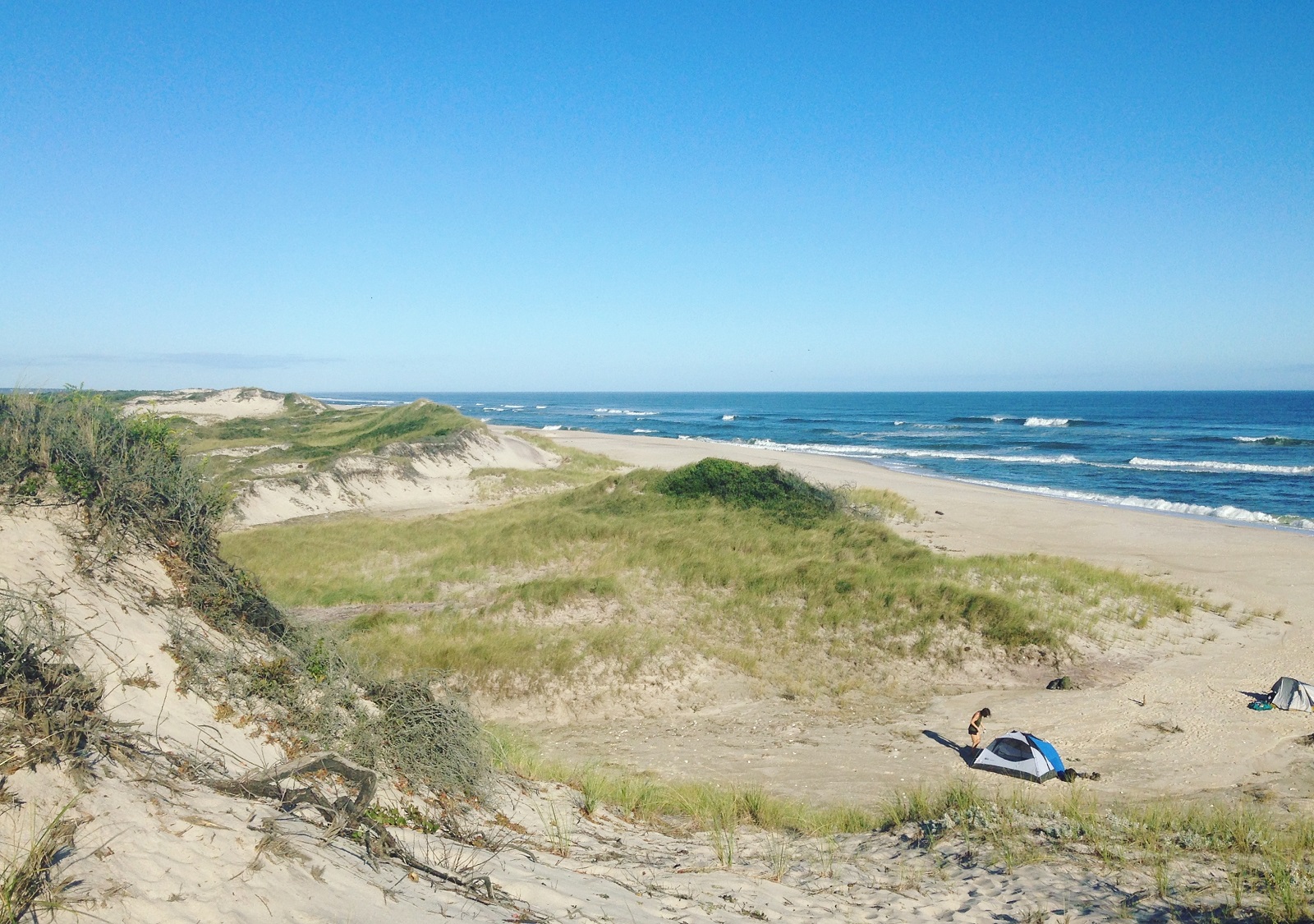 When the sun began to set, I confidently unpacked and assembled the stove and gathered our meal’s ingredients: several packs of boxed mac and cheese and zucchini for the grill.

Light fading fast, fellow campers gathered around with growling bellies, I had my first moment of self-doubt upon unfolding the enclosed directions. There must have been several thousand words printed there in 8 point font, and that was just for the grill attachment! 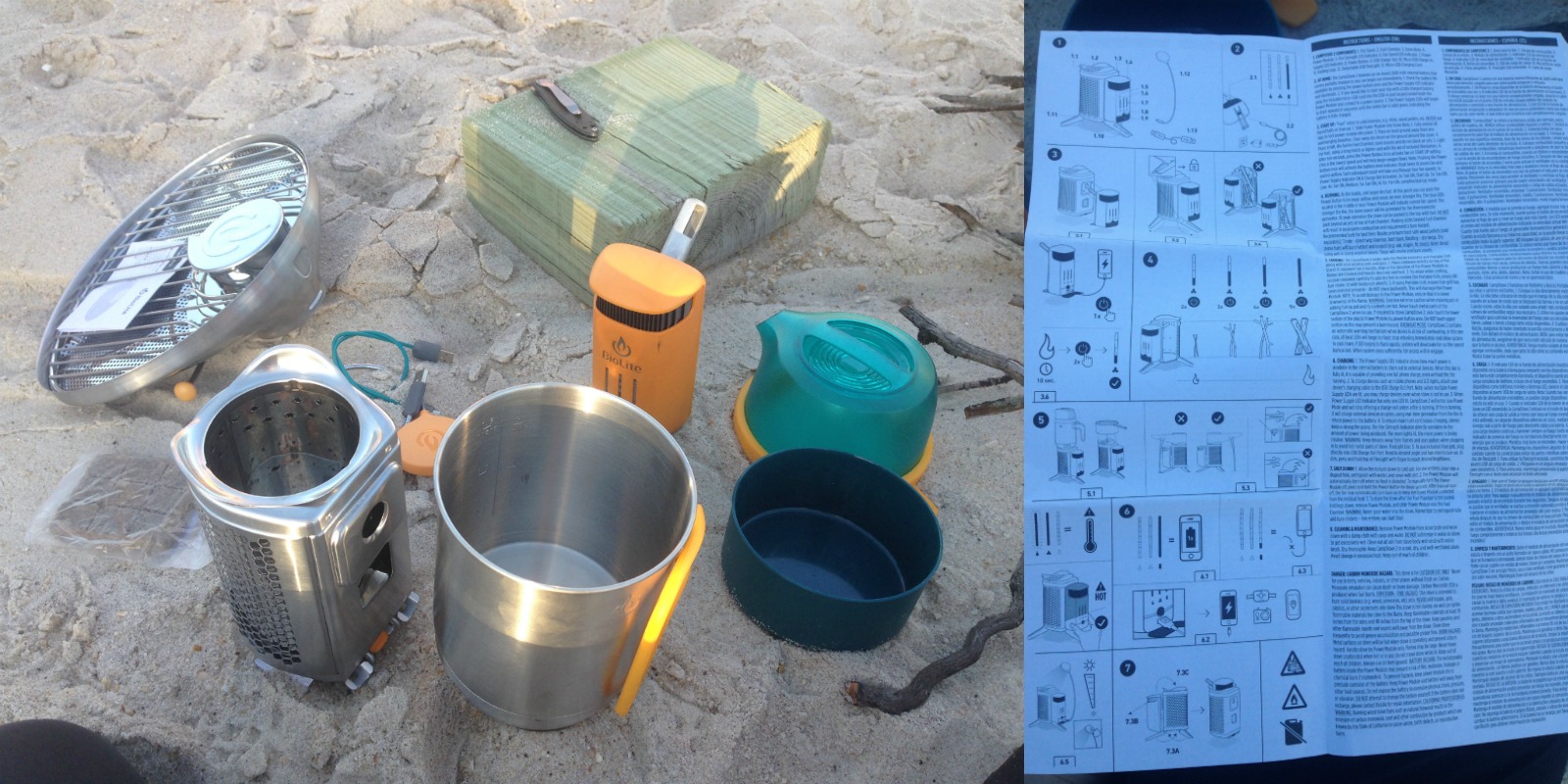 Ah, but upon closer inspection I realized most of those words were printed in German, French, Spanish, Japanese, Dutch, Italian, Korean, Swedish, Norwegian, Finnish, and Chinese. Phew! Confidence only momentarily punctured, I pressed onwards. I added one of the included fire starters to the stove, broke up some nearby twigs, crumpled up a bit of paper and stuffed that in, and struck a match. No teepee building, no lean-tos, and no log cabins, just some twigs and paper unceremoniously stuffed inside the stove and voilà: fire! As soon as I saw the twigs catching I followed the directions and pressed the power button twice in order to activate the fan mechanism. It took just a minute or two to build enough of a fire to start heating the water. I had some difficulty getting the hang of keeping the fire at a relatively steady heat and flame level, but thankfully I had a sous chef to help alternately remove the cooking pot and add twigs to the fire. 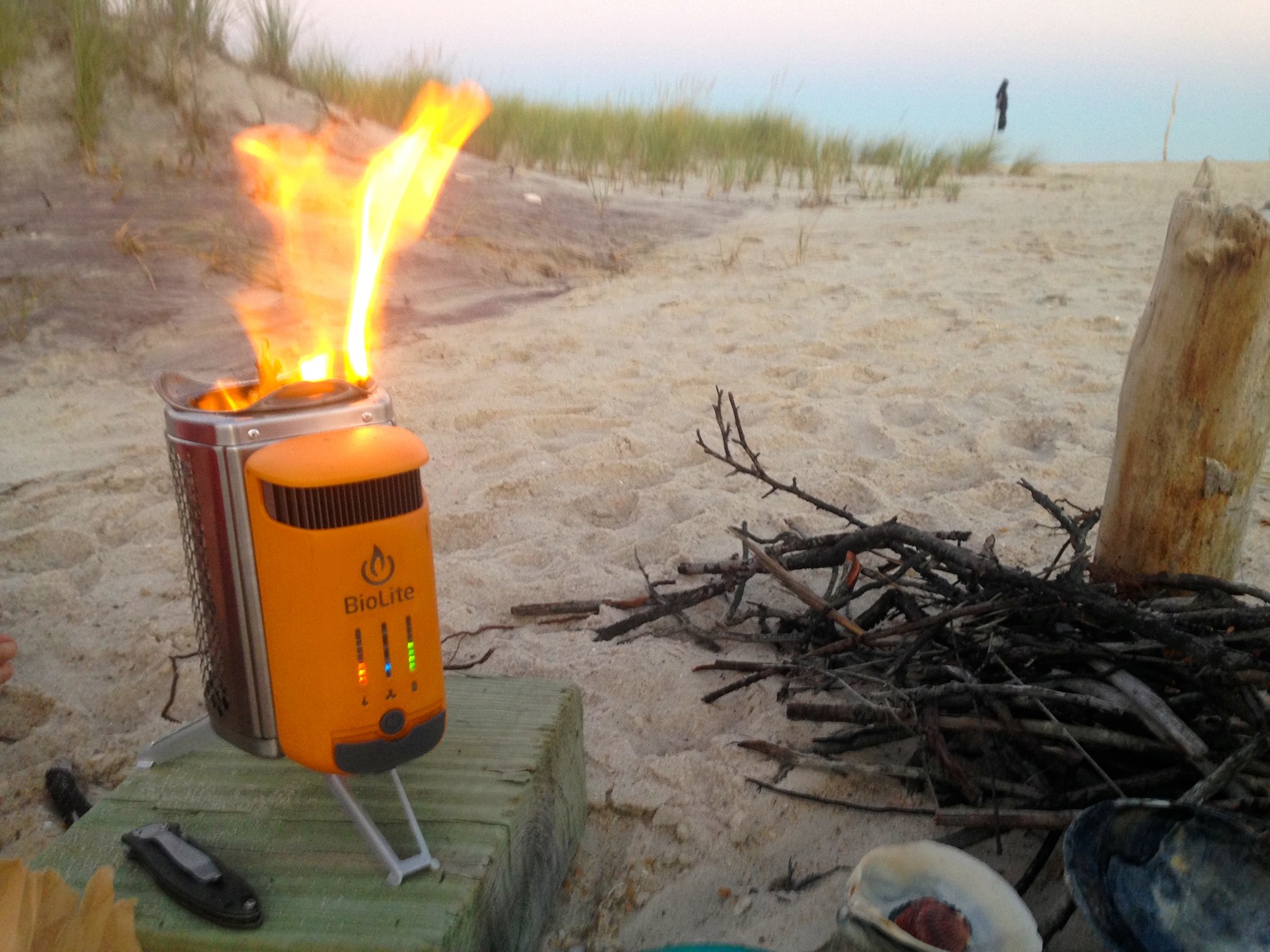 Eager to try out the stove’s other functions, I connected my phone to the stove’s USB port. (Quick note: the stove comes with an Android charging cord, otherwise known as a Micro-USB, so if you have an iPhone remember to pack your own cord.) Within a few minutes my battery level jumped 20%. My friends were duly impressed.

By now darkness was settling in, and as we each pulled out our headlamps, I remembered that the stove also came with a nifty light attachment! Retrieving it from its bag, I replaced my phone cord with the light’s USB attachment and angled the light so as to shine upon our cooking area. Quite suddenly our camp kitchen was bathed in enough light to comfortably cook, clean, tend to the fire, or even read a book if we had all been so inclined. 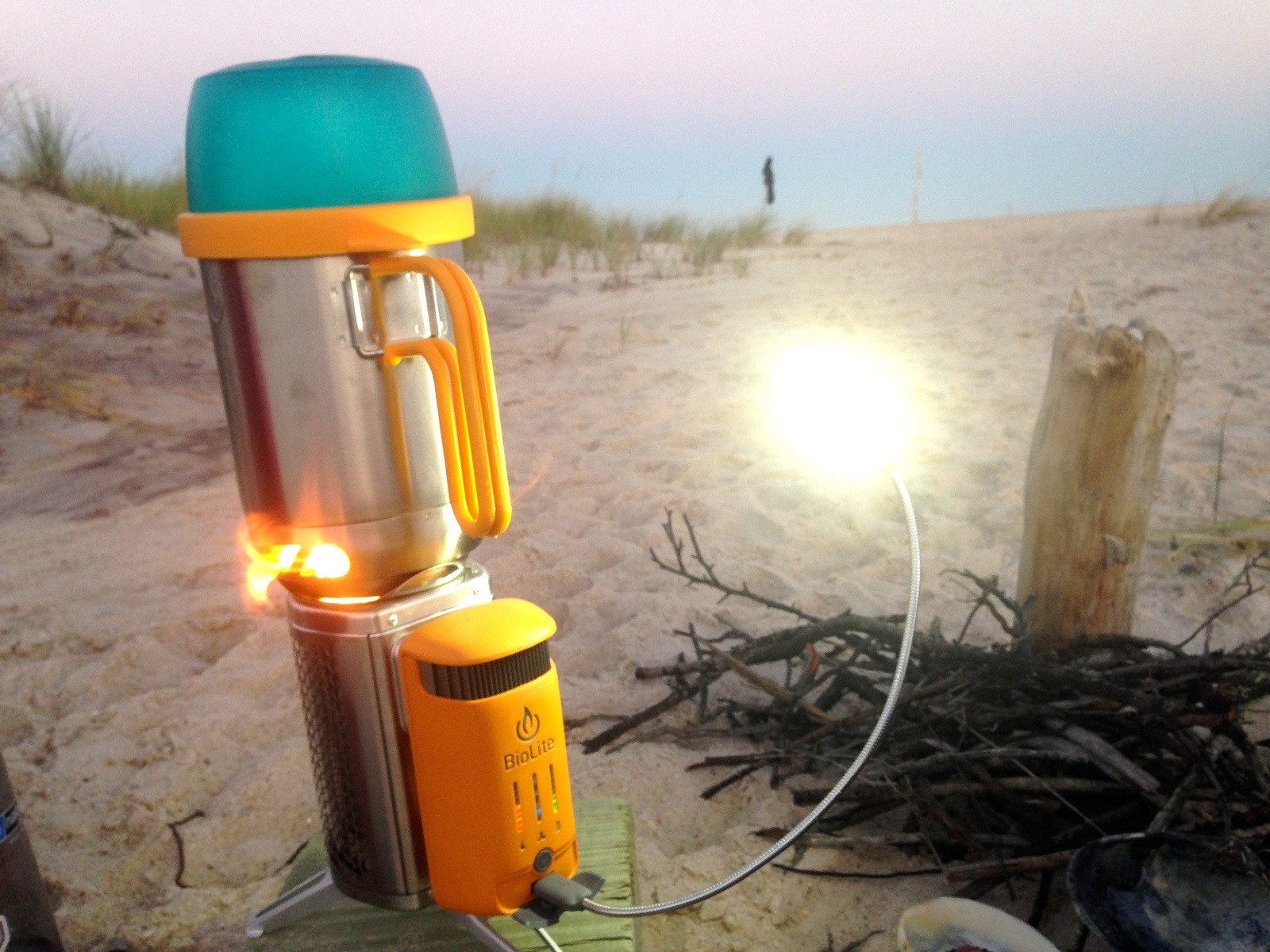 This light attachment was probably one of my favorite features of the stove. In the artificial glow of the stove’s light, I was soon serving up the mac and cheese and setting up the grill attachment in place of the pot. I placed slices of zucchini on the grill, and busied myself with dishing out pasta and making sure there were enough sticks and twigs to keep the grill going while the zucchini cooked.

The mac and cheese assembled and the zucchini perfectly charred and smoky-flavored, dinner was served! I could actually see the relief on my friends’ faces as they finally held solid, definitive proof in their hands that they would not, in fact, be forced to subsist on salad this particular evening. The meal tasted of sweet, sweet vindication. 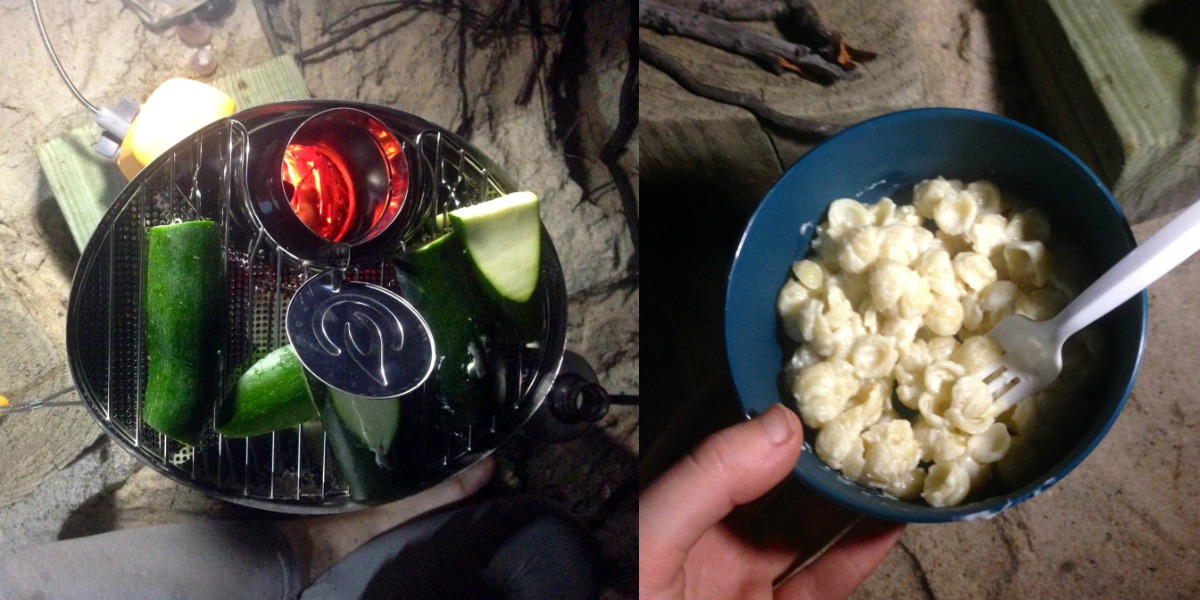 My camping honor restored, I returned triumphantly, albeit sunburned and badly fly-bitten, from the beaches of Fire Island. Overall, the Portable Camp Grill and Charger turned out to be a boon for both my woodsy reputation and our camping trip as a whole. What’s great about this stove is that it runs purely on biomass—no oil or gas needed (something I love as a reluctant user of fossil fuels). But what’s also tricky about this stove is that it runs purely on biomass, meaning if you don’t have some wood pellets or dry sticks handy, you’re probably going to be left eating granola bars for dinner. Hence planning is key and if rain is in the forecast pack some pellets or bring a backup butane/propane stove.

Easy to use and armed with all manner of extra bells and whistles that come surprisingly in handy, I’d recommend this stove for anyone doing some short-distance backcountry camping or just for an adventurous family camping trip. Perhaps just learn from my (poor) example, and make sure to pack some matches, too.

Get your own on-the-go grill & charger here »

Maia is the Merchandising Assistant for Kitchen, Growing Garden, Food & Drink here at UncommonGoods. When not hard at work on the garden/kitchen/food assortment, you can likely find her surreptitiously sampling farmers’ market wares, struggling to keep her houseplants alive, or napping.