Gift Lab: How Well Does the Bard Dispense Profanity? 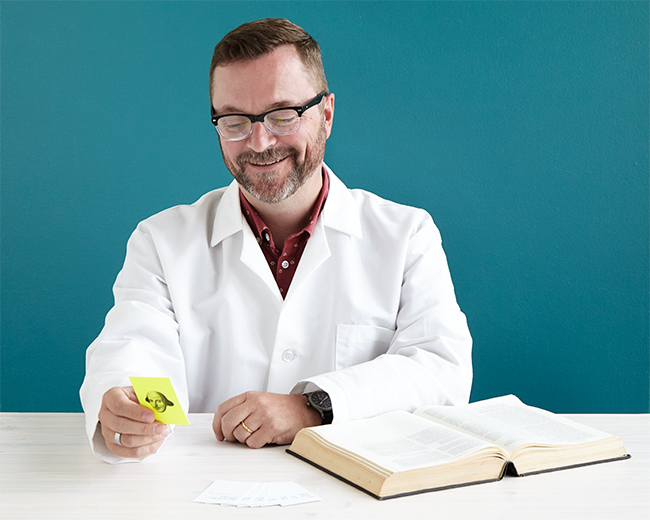 Our copywriter, Eric, checks out some Shakespeare silliness.

Having played a certain infamous, misanthropic card game a few times, I was curious about whether our Shakespearean version—Bards Dispense Profanity (BDP)—would provide a similar level of smutty, giggle-inducing fun. Or would it be a tedious, highbrow take on a very lowbrow phenomenon? Only one way to find out.

This report is inspired by our long-running Gift Lab series, but I took some poetic license with the scientific method. After all, Will would want it that way.

Now, once more unto the breach, dear friends, once more! 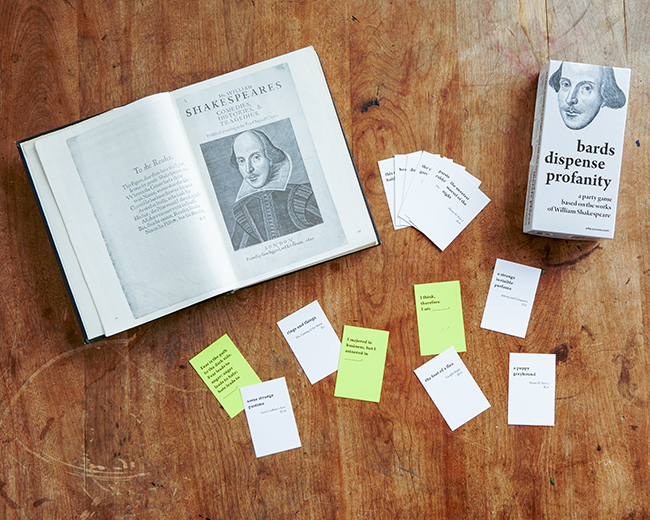 The Play’s the Thing

Even before unboxing the game, it occurred to me that Shakespeare was one of the smuttiest writers of his (or any) age. For many plays, groundlings could count on being entertained by a saucy smattering of ribald situations and inventive innuendo. Much of this relied on actors’ suggestive gestures and some cultural context that’s been lost, but this much remains: Bits of the Bard’s prose lend themselves to this sort of parlor game, especially out of context.

The test was simple. I figured this game didn’t lend itself to a double blind scientific study, or to hooking players up to the funny meter. So I invited some friends, poured some drinks, and played a few rounds of BDP. 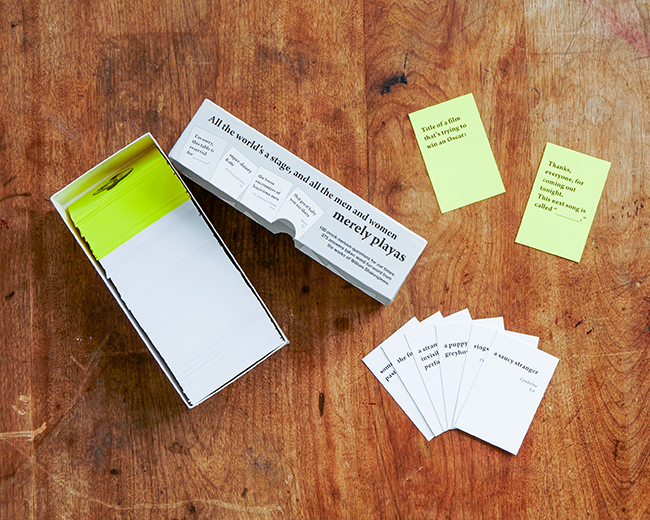 The box itself sets the tone, with this reflection on the side. 90% Hamlet, 10% ham sandwich. I get it. This is slapstick Shakespeare in the spirit of Something Rotten and Rosencrantz and Guildenstern Are Dead. 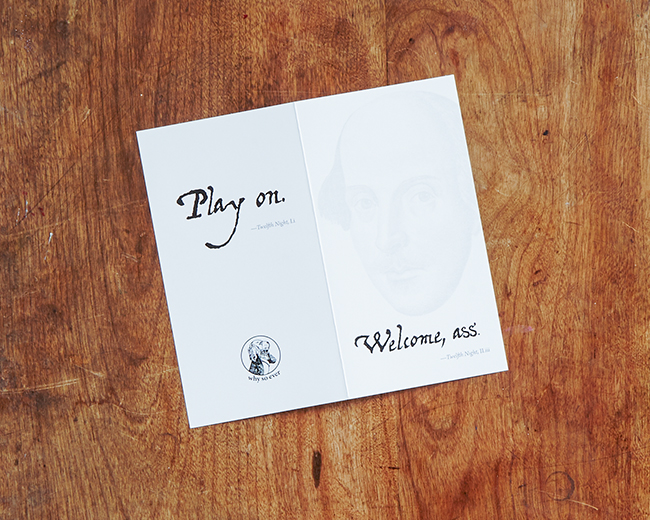 Unboxing the game, we encountered this cheeky bit on the cover of the instruction card that perfectly set the tone. Get ready to make a fool of yourself and indulge in some locker room humor (the actors’ locker room at the Globe Theatre, that is).

If you hate games with elaborate, confusing instruction booklets that take hours to comprehend, you’re in luck. The directions are about as minimal as Shakespeare’s stage directions, ending with this priceless piece of frivolity: Play until you get bored. At the end of the game, whoever has the most yellow cards wins. If you care.

Do we care? You bet we do. Lay on, Macduff, and damned be him who first cries ‘Hold! enough!’ 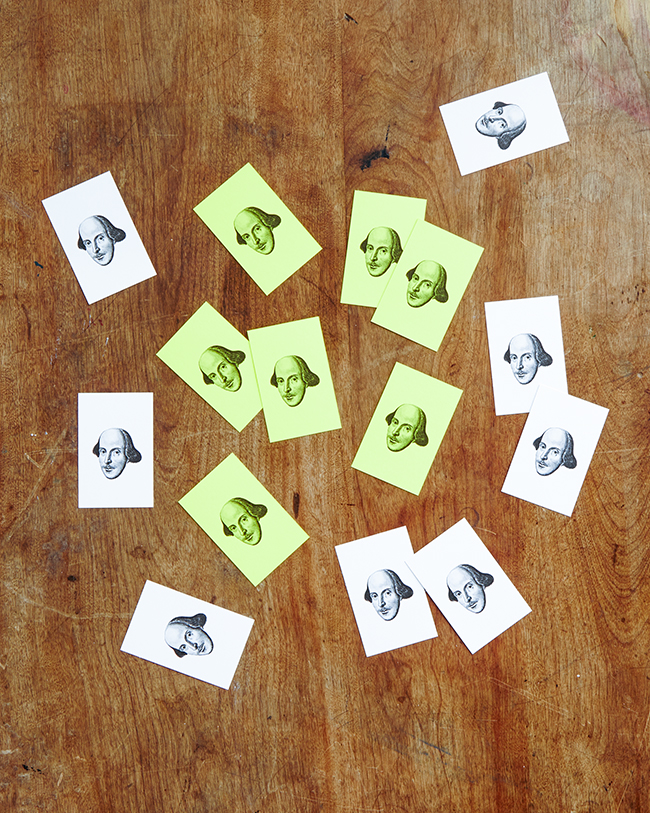 A Tale Told by an Idiot, Full of Sound and Fury, Signifying Nothing

Even if you’ve never played the NC-17 game that inspired it, the rules of BDP are almost intuitive: One player draws a yellow card that offers a playful sentence with a provocative blank (or two), like decidedly adult Mad Libs. The other players choose from their hands of seven white cards containing snippets of Shakespeare, and the “Profanity Judge” (yellow card player) decides which yellow-white card combination is the most amusing, outlandish, or, well, profane. You can usually tell by the degree of beet-red faces and giggling as the white cards are presented.

After the show it’s the after party, and after the party it’s each actor on his ass.

We’ll be holding you in an isolation chamber until we can rule out a mess of Russians Syndrome (note the accidental invocation of current events).

For curious players who lack a PhD in Elizabethan literature, some of the cards include footnotes that define archaic terms, e.g. beeves: oxen. But you might just want to ignore these notes, because the comic genius of this game often hinges on out-of-context misunderstanding. “I’ve got fat bull-oxen” might be funnier if you don’t know what beeves means, leaving your modern mind to slip into the proverbial gutter. 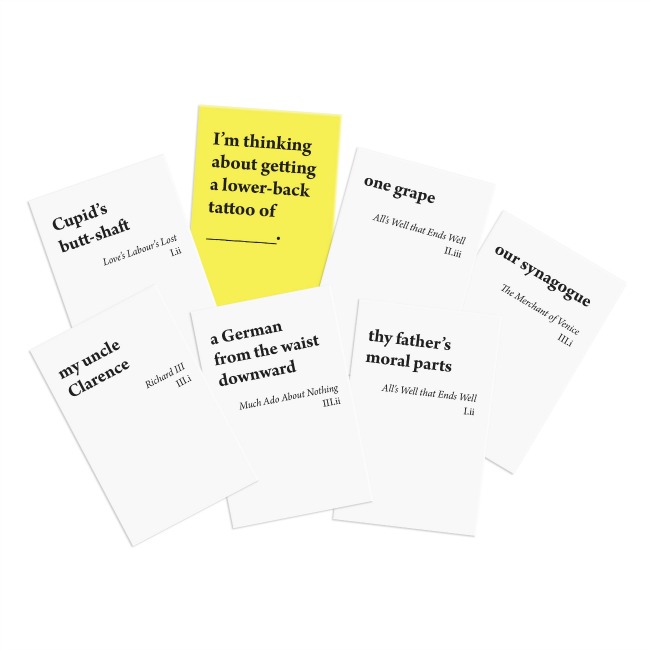 Exit, Pursued by a Bear

Like the popular card set that inspired it, BDP can’t be considered a “family game” by most definitions, so don’t plan on playing it with impressionable little minds. But it does deliver plenty of entertaining play fueled by the deliberate clash of highbrow context with lowbrow humor. One of my fellow players put it this way: “I thought it would be annoyingly over-literary, but it wasn’t. Some of it was just kind of obscure.”

My one suggestion: The rules are so simple that they might lend themselves to creative additions that could make the game even more fun. Why not whip up your own “house rules,” like giving extra points for most embarrassing or most surreal answer? We also found that reading the white card options (and some of the yellow card prompts) in over-the-top Sir Lawrence Olivier voices added to the fun.

Based on our research, I’d say that BDP would be fun for any group of literature lovers, for meetings of your Kenneth Branagh fan club, or for any group of consenting adults, really. Just add friends, free-flowing ale, and a taste for the lighter side of Hamlet’s existential angst. And if you like BDP, our Shakespearean Insults poster would make the perfect backdrop.

Our Guide to 20th Anniversary Gifts: Three Cheers for China