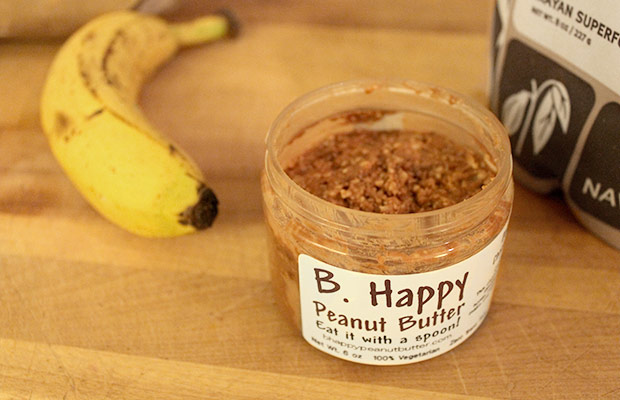 Whenever our buyers bring a new food item into the assortment, the first question everyone in the office asks is, “When do we get to taste it?!” In the case of the Peanut Butter Sampler by Jon Weed, the next question we asked was, “When can we have more?”

All six flavors in the set are good enough to eat alone and make killer PB & Js, but since we’re all about thinking outside of the bread box, we decided to give each type of peanut butter a try as an ingredient in our favorite recipes. To do this, members of the blog team each grabbed a couple of jars and got cooking.(Spoiler alert: the results were delicious.) 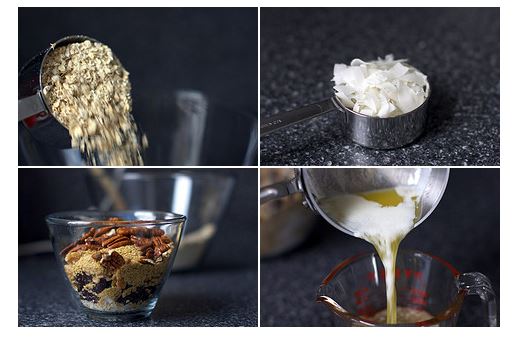 I am a huge fan of Deb Perelman’s blog Smitten Kitchen. Since discovering her detailed, time-tested archive of delicious recipes, I rarely consult Google whenever I get a hankering to cook. So when I got my hands on the “So Happy Together Snickerdoodle” peanut butter, I knew that Deb would be my first stop in figuring out the best way to test this unique flavor. Enter the most delicious granola bars I have ever tasted! 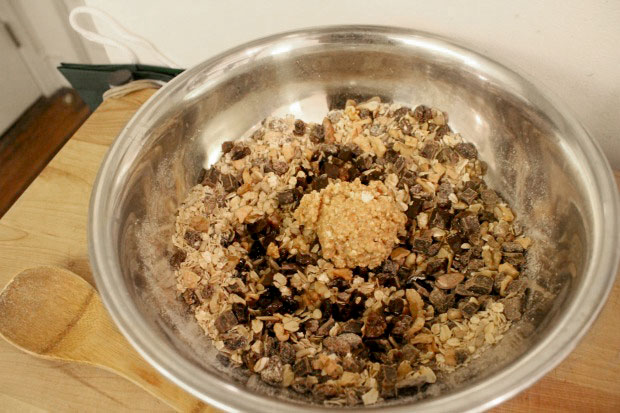 Besides being really easy to make, what I love most about this recipe is that it can be altered with an infinite combination of fun ingredients. Deb uses a mix of wheat germ, dried cherries, walnuts, pecans and unsweetened coconut flakes. I went with a trail mix from the bulk section of my local Whole Foods: raisins, dates, walnuts and sunflower seeds. I also threw in thick chocolate chunks, and opted to use coconut oil instead of butter. Instead of plain old peanut butter, I mixed in a generous portion of our sampler’s honey-roasted, snickerdoodle variety. There’s no way you can buy snacks like this at the grocery store. If you’ve never enjoyed peanut butter popcorn chunks in your granola bars, I suggest you roll up your sleeves and give this recipe a go with our Sampler Pack. Alter it however you like, but don’t dare forgo the peanut butter! 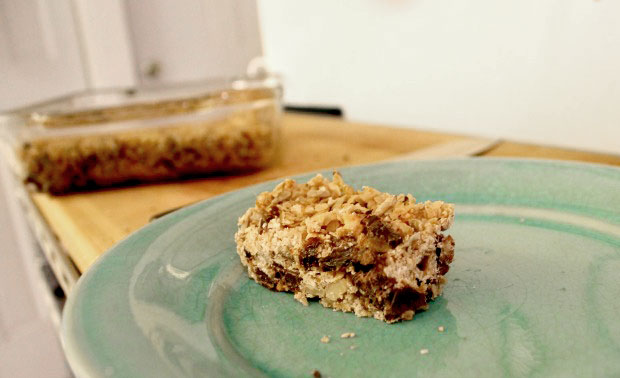 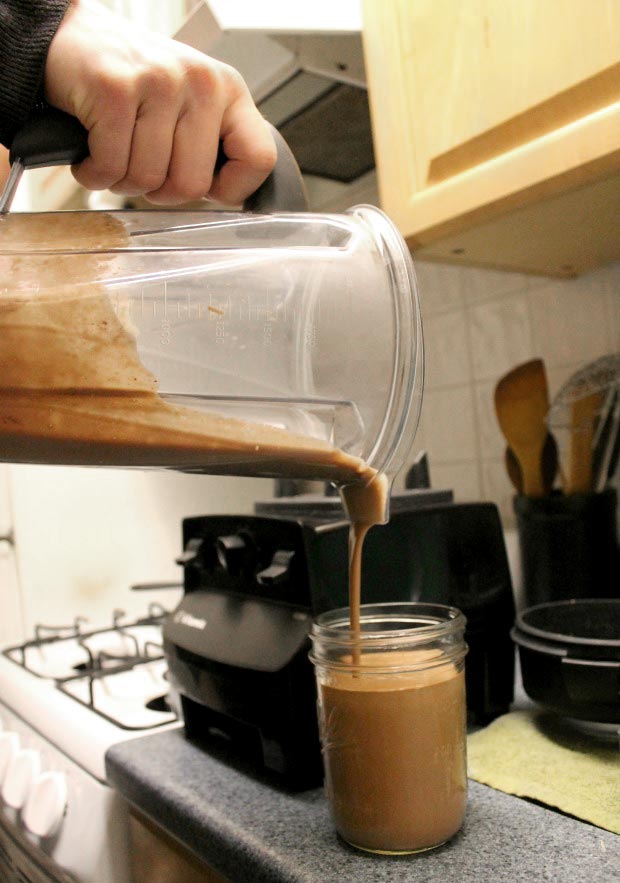 When I first found out that we had peanut butter to test, I knew that I would need to invite my most favorite appliance in the world – my refurbished Vitamix. I absolutely love peanut butter in my smoothies, so I searched the interwebs for a simple recipe that would really make this the “Don’t Worry Chocolate Coconut” peanut butter stand out. I followed this Two Peas in a Pod recipe through every step, replacing the plain peanut butter with our chocolate coconut variety. One sip instantly brought me back to my high school days, drinking Jamba Juice’s Peanut Butter Moo’d after my yearbook class. The thick chunks in this peanut butter made this blend even richer, while the coconut added a hint of sweet flavor. It lasted a solid three minutes before I finished my entire glass. 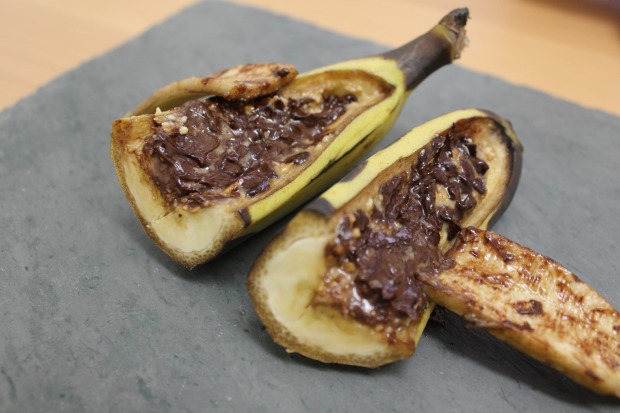 As the weather warms up, I start looking for excuses to fire up the grill and get cooking. One of my favorite treats is a Banana Boat. I make these because you can tell yourself that you’re getting protein from the peanut butter and vitamins from the banana. Sure it’s loaded in chocolate, but that doesn’t cancel out the other good stuff.

To make one, you need to grab a banana, some peanut butter (I recommend the Happy Trails Mix from our Sampler Pack), chocolate chips (I prefer the mini size to evenly spread out the chocolate) a knife, and tin foil. First, wash your hands, then cut a v-shaped hunk out of the inside curve of your banana. Hold onto the peel, but feel free to eat the bit of banana you pull out of there. After that you want to shovel a healthy amount of peanut butter in there. I try to leave a small space at the top for the chocolate chips, but I usually end up having to sprinkle the chocolate on top of an overflowing mound of peanut butter. That’s not a bad thing, though. When you’re adding the chocolate chips, be prepared for them to get all over the place because there is no mess-free way to do this task. Once you have your chocolate and peanut butter situation squared away, you want to place the peel on top and wrap it in foil. After that, your prep is done. You just need to pop it on the grill (or even better in the coals of a campfire) and wait until you can’t resist the delicious chocolaty smell emanating from the corner of your patio. If you want to flip them over or fuss with the alignment, feel free, but I wouldn’t sweat it.

Once you’ve given into temptation and popped your boats off the grill, cut them into two pieces and enjoy with a spoon.

The Elvis Sandwich (By Dylan) 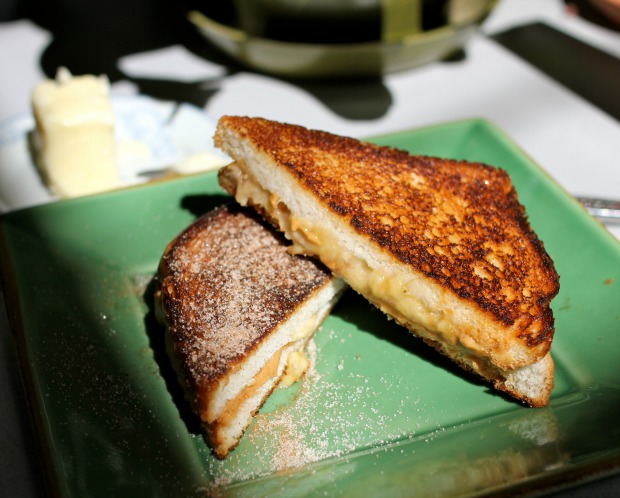 Elvis Presley quickly established himself as the most charismatic performer ever when he burst on the scene in the 50’s. He had an enormous amount of success by combining ingredients from already popular music into something entirely new and unique. Elvis’s taste for unusual combinations went beyond his music and influenced his taste in sandwiches. He became so famous for wolfing down peanut butter, banana, and bacon sandwiches that people started referring to it as “The Elvis.”

Step one is to find some bread strong enough to withstand the massive amounts of peanut buttery goodness that you’re going to smear all over it. Since there’s no jelly involved, I like to put the peanut butter on both slices of bread to better glue the bananas in the middle. Once you’ve slathered up the bread with enough PB to make George Washington Carver smile, slice up a banana or two and lay them lovingly on top of the peanut butter. If you want to get fancy you could mash them up and spread it around, or if you want to get even fancier you can caramelize the bananas in a frying pan. As an animal-friendly company, we personally don’t put bacon on ours (but there’s nothing we can do to stop you!).

Once you’ve assembled your sandwich, pop that bad boy in your frying pan and brown both sides. If you made bacon for your sandwich you could always fry it in the bacon fat. If you’re using a crunchy peanut butter (or even better a SMUNCHY peanut butter) you will get a really nice texture difference between the bananas and peanut butter. When you’re finished, you should probably go lie down and take a nap. You earned it. 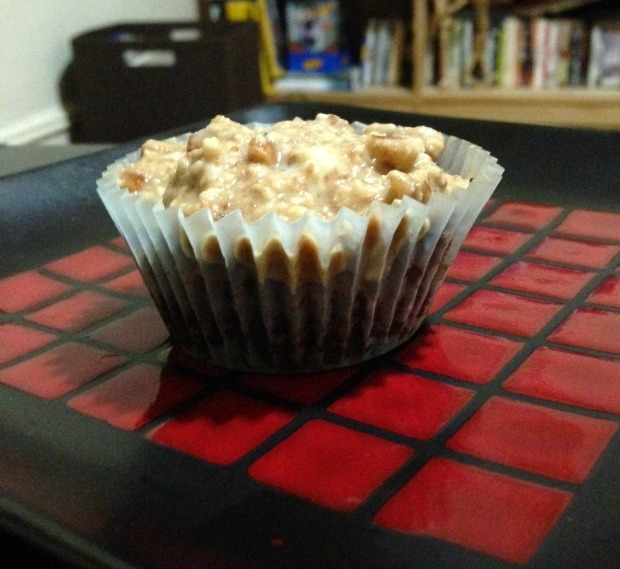 I like baking, but I don’t have a ton of time to do it, so I like to scour Pinterest for easy recipes that don’t use a bunch of ingredients. I was on the hunt for a quick and easy cupcake recipe when I came across something amazing. This pin explaining how to make delicious cupcakes using only three ingredients. The star ingredient is one of the greatest foods of all time, Nutella. The original recipe from Indestructibles calls these delicious treats brownies, but I proclaimed them cupcakes, since they’re cooked in a muffin tin and wrapped in those little paper things.

So, how could I improve on one of the easiest cupcake recipes of all time? In addition to the Nutella,eggs, and flour, I added a scoop of Dream Big White Chocolate Pretzel from our Sampler Pack.

The white chocolate, peanut, and pretzel flavors blended nicely with the hazelnut and chocolate from the Nutella and the addition didn’t affect the texture or cooking time of the finished cupcakes. To top it all off–or just to top off the dessert–I covered each cake with a little more peanut butter. 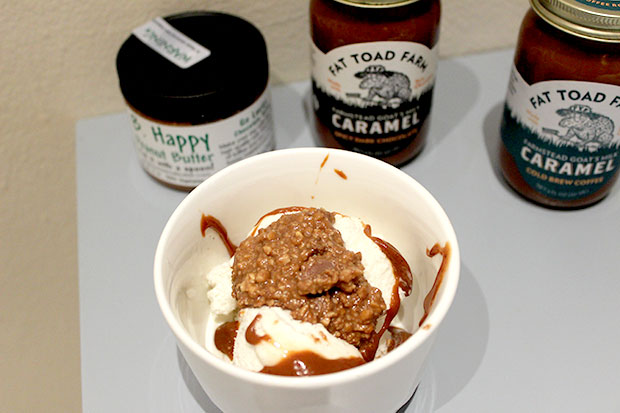 In the spirit of super easy treats, I decided to give the last peanut butter in our pack a pretty basic treatment. Each container’s label reads “eat it with a spoon,” and while that’s certainly an option with any variety in the sampler, I had to stop myself from eating the entire jar of Go Lucky Chocolate Toffee before it made its way into a recipe. My solution was using it as an ice cream topping.

I happened to also have a couple of jars of caramel from our Caramel Sauce Set in the fridge, so I started my sundae by drizzling Spicy Dark Chocolate over a few scoops of vanilla ice cream. I added a hefty spoonful of peanut butter right on top and dug in. Technically, I still ate the peanut butter with a spoon, but each bite also contained creamy vanilla, the perfect combination of sweet and spicy, and chocolate caramel goodness. 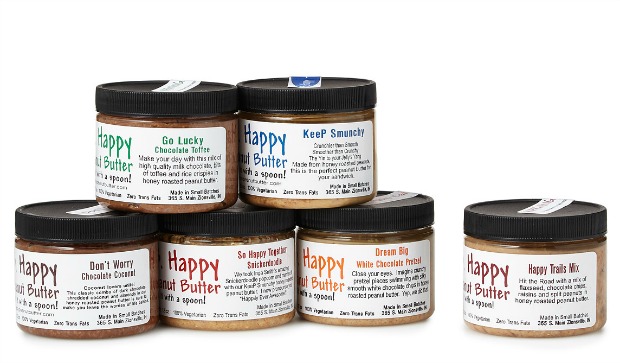 This Just In: Our Top 5 Most Creative and Head-Turning Greener Materials