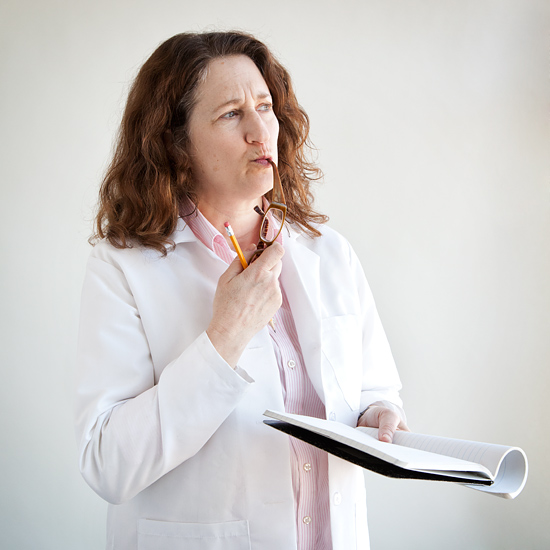 I hate waste. I’m really OCD about it. Disposable shopping bags, takeout containers, and water bottles really bug me. And yet, I do shop, eat on the go, and need H2O. Thus was born my quest for the perfect personal food transport equipment. 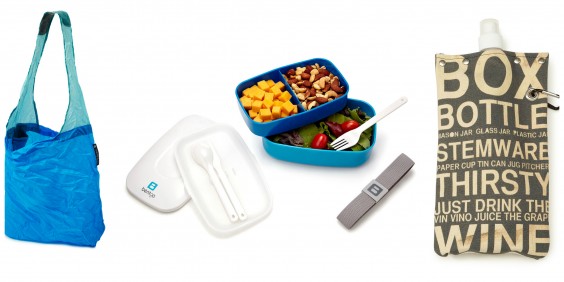 Our Flip & Tumble Reusable Shopping Bags are light and small and hold a lot. Sounds promising. Our BentGO Lunch Box is good looking. Most of its lunch-toting brethren are decidedly not. It’s also a good size, and except for the lids, microwaveable (for warming up, not cooking), and dishwasher safe. Also promising. Our Wine and Beverage Tote, with its tough canvas outer skin, seems a lot sturdier than fold-up plastic bottles I’ve used before.

This was mostly accomplished at the Park Slope Food Coop, of which I am an enthused member. A sustainability-minded organization since forever, the coop doesn’t give out shopping bags. Flip & Tumbles are perfect for shopping there. They weigh virtually nothing, open up in a jiffy (faster and easier than any shopping bag I’ve ever used), hold a lot, and are strong and sturdy. The even have a non-slip patch on the inside top of the shoulder strap. 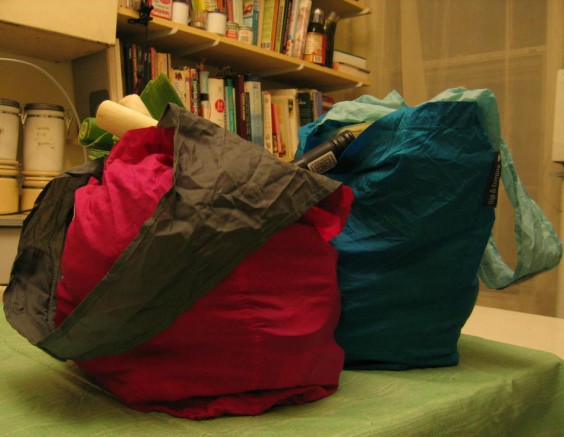 Here’s how they look full of groceries. 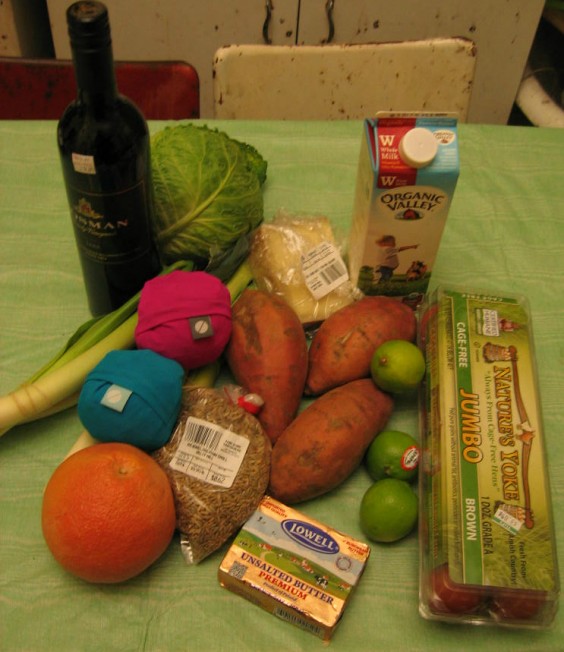 Here are most of the ingredients, spread out. (The bags actually held a lot more than this.)

I bought a spaetzle maker no less than 6 years ago, and until now, had never used it. Sound familiar, gadget lovers? I saw this recipe in the New York Times, and knew this was what would make spaetzle happen in my kitchen.

To round out the meal, I decided to make mashed sweet potatoes with lime and honey (the recipe calls them yams, but they are NOT; shame on you, Saveur!) with broiled grapefruit for dessert. 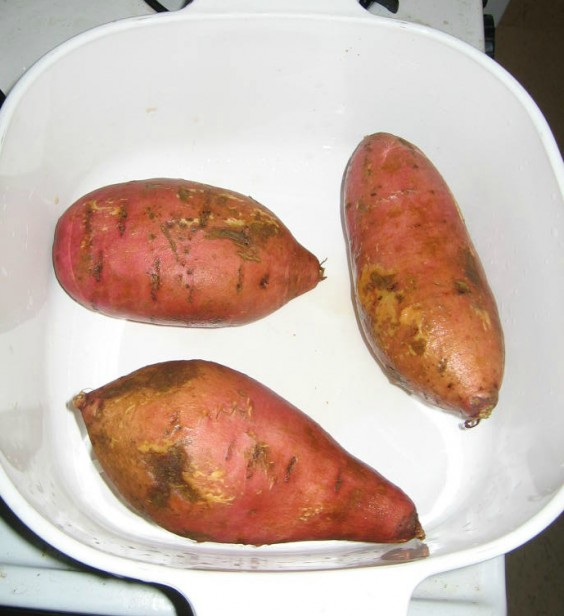 I put the sweet potatoes in a casserole dish and stuck them in the preheated 350 degree oven.

I then sliced the leeks and cabbage (separately) very thinly in the food processor. I melted a bunch of butter in a big frying pan and sauteed the leeks. But I forgot to take photos of all that, so you’ll have to use your imagination.

The savoy cabbage, sauteeing on top of the already-sauteed leeks. 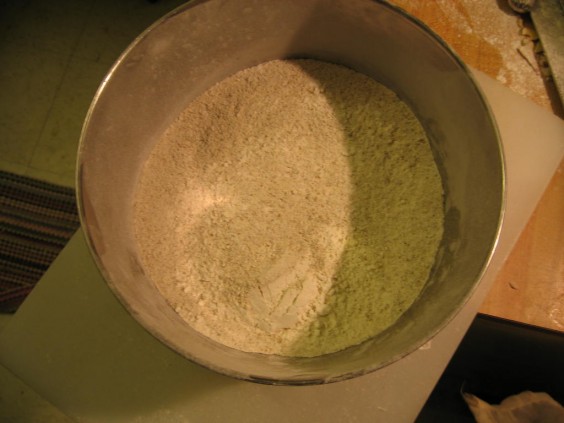 Above is the mixed white all-purpose, whole wheat, and whole rye flour (yes, I ground it from the berries, here’s why), to which I added an egg and whole milk. It’s supposed to end up like cake batter, not bread dough, so you keep adding milk until it feels right. Because I used whole wheat flour, which the recipe doesn’t call for, I used more milk than recommended, because whole wheat flour absorbs more liquid. 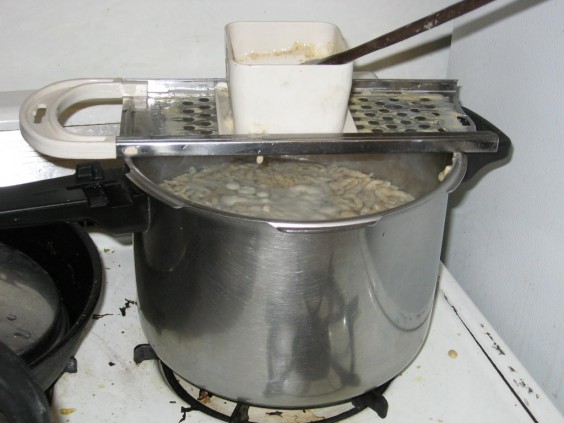 My spaetzle maker in action, at long last. You pour the batter gradually into the white hopper which you then slide along the holey stainless steel part that’s straddling the pot of boiling, salted water. The dough slips through randomly, drops into the pot, and cooks very quickly, rising to the top. 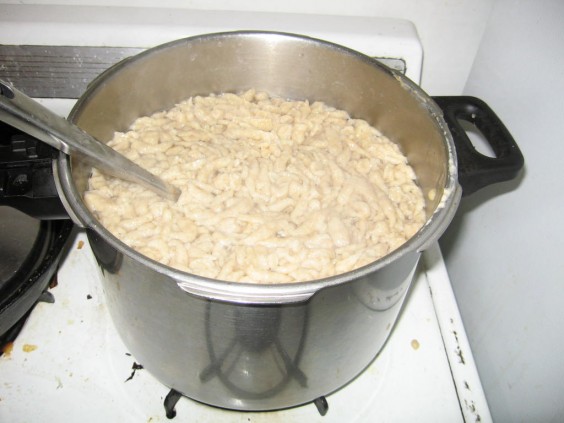 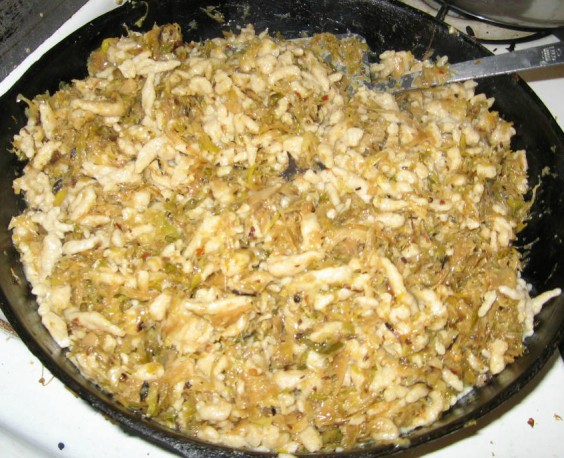 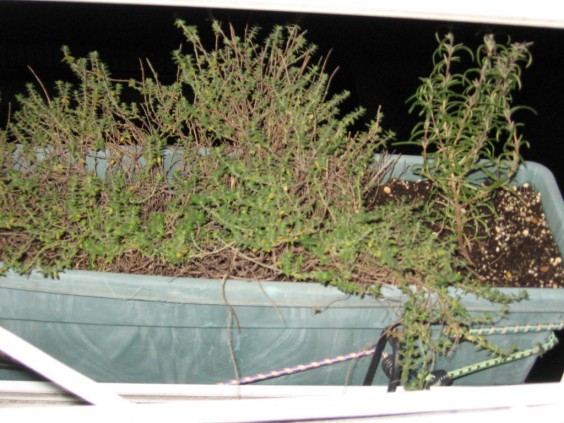 The recipe calls for thyme, which I conveniently have growing in one of my kitchen windowboxes.

Now it’s time for it to be topped with grated Gruyere cheese, put in a casserole dish, and baked. But wait–where’s that dish?! 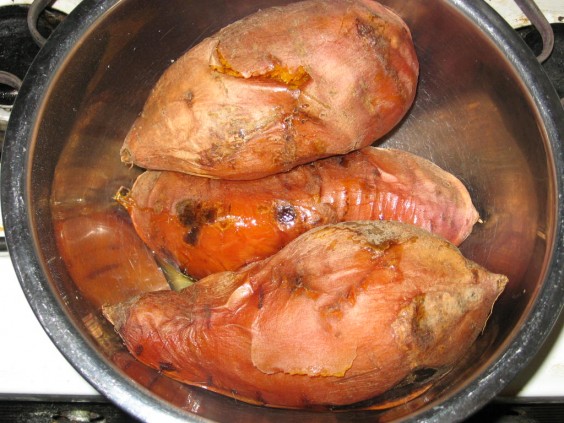 Oh yeah, it was baking these. When I took them out, I didn’t bother cleaning it, because sugary, gooey sweet potato ooze can only improve a dish. I did mix it in, though, so it wouldn’t just burn on the bottom. 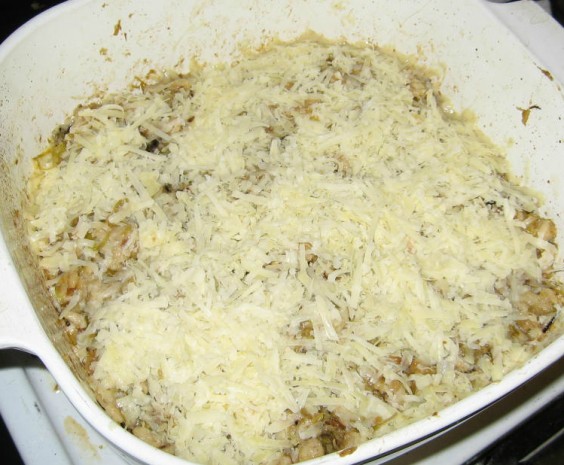 The casserole in a state of baking readiness. 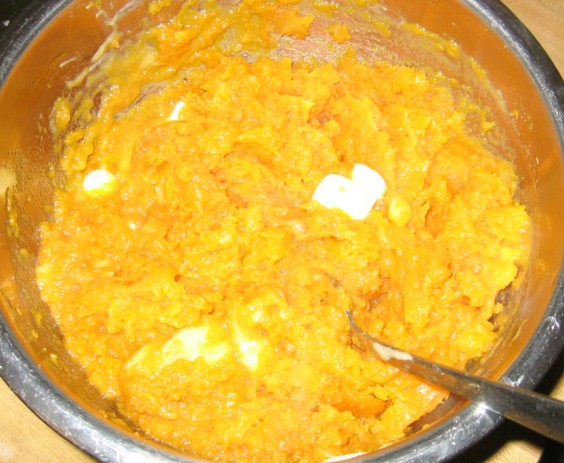 The sweet potatoes, mashed with a fork and mingling with their new BFFs: butter, fresh lime juice, and honey. 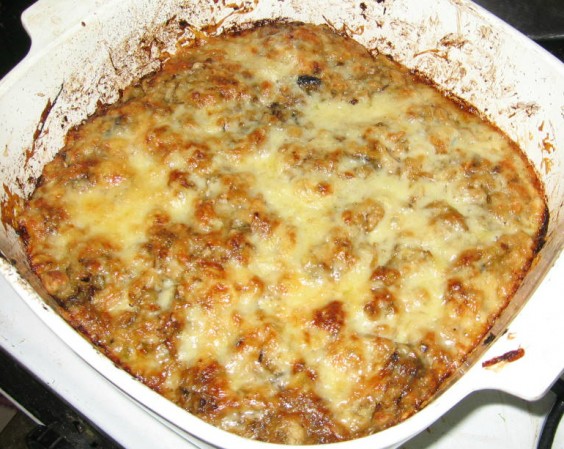 20 minutes after being put into the 425 degree oven: Done. 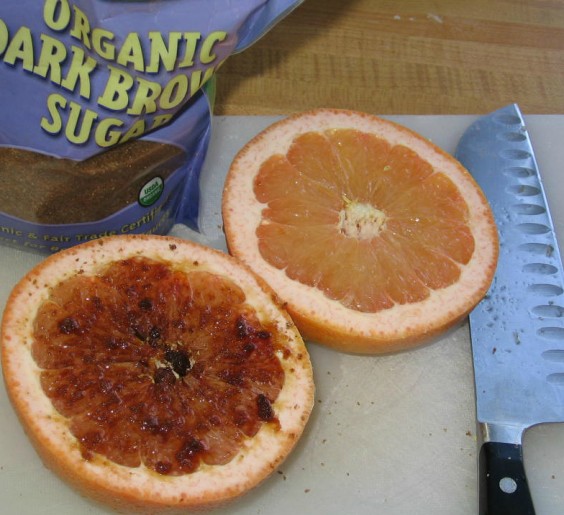 Now for the broiled grapefruit. Easiest thing ever: cut in half, top with brown sugar (or not), turn broiler on, pop in citrus.

~An interlude, during which I eat this delicious dinner, and sleep. A new day dawns.~ 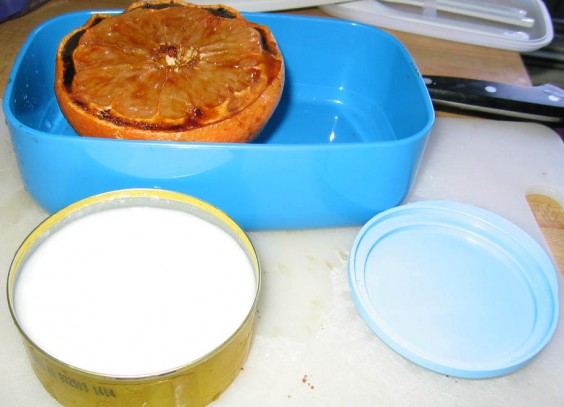 The true and ultimate destiny of this food, of course, was being consumed as leftovers. I added some homemade kefir I put into a can that I’d fished out from the recycling and washed (see above re: “OCD about waste;” also, it was the perfect size), because I thought it would go well with both the casserole and the grapefruit. 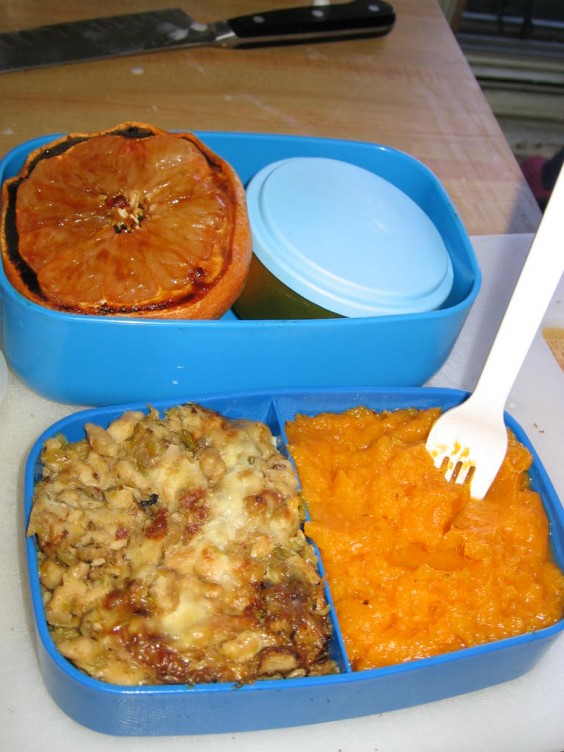 Stick a fork in it–it’s done.

A) The spaetzle dish, like most casseroles, was even better the next day. It nuked up beautifully in its spiffy BentGO container. I ate it in about two minutes flat. No, I will not show you what that looked like. My mother might be reading this, and it would make her cry to see that all those years of table manners lessons were wasted on me. 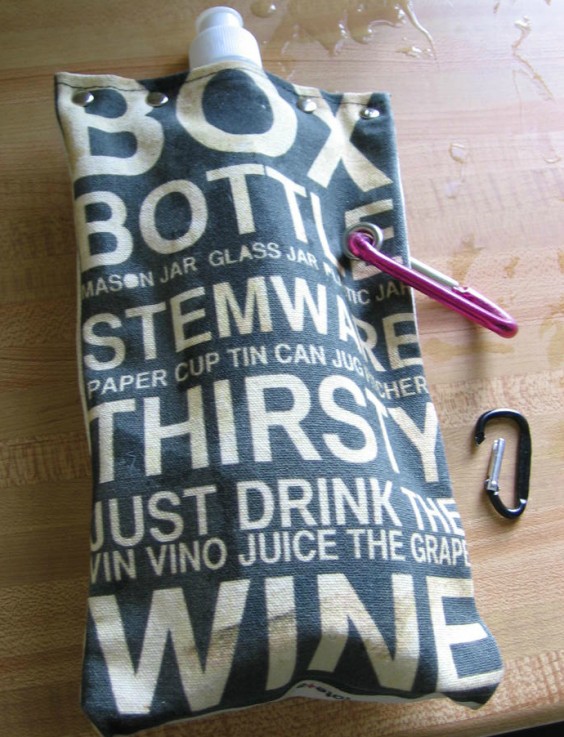 B) The Wine and Beverage Tote, alas, was filled only with water, because I was at work. (You think I can write all juiced up? No. I leave that to pros.) For purely scientific purposes, I did fill it with wine the night before. Miraculously, it holds an entire, normal-sized bottle, though you have to make sure the bag is poufed out all the way while (carefully) pouring. I recommend red wine, because the Tote isn’t insulated, so the wine will be at room temperature before long.

I really appreciated its sturdy canvas exterior, because it freed me from the nagging worry that something sharp in my bag might gouge it. If there’d been red wine inside, I would have appreciated it even more–no, not because of the alcohol; because of the potential for mess. (OK, the alcohol, too.) Note that I swapped out the original petite black carabiner with a larger one of my own, partly–but ONLY partly, I swear–because mine is pink.

Uncommon Knowledge: Do you suffer from anastrophe?