I had a bunch of leftover cooked jasmine rice in the fridge and a new UncommonGoods gadget I wanted to try, the Garlic Rocker. So I did the math and came up with Garlic + Rice = Garlic Rice. Clever, eh? 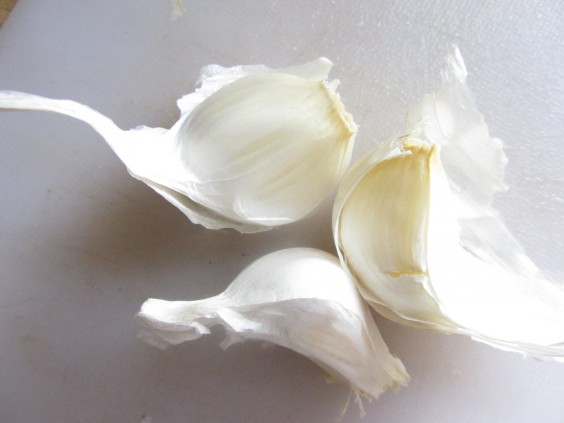 Googling “garlic rice” in search of a recipe led me to the discovery that in the Phillippines, it’s a breakfast staple called “sinangag” in Tagalog. Garlic for breakfast?! I was on it like white on rice.
Because fried rice doesn’t require exact measurements–you can judge just by looking how much of each ingredient you want to add to it–I looked at several recipes and more or less winged it from there. (The recipe links are at the bottom of this page.) I also consulted UncommonGoods’ two Filipino software developers, Albert Tingson and Orlando Geronimo. 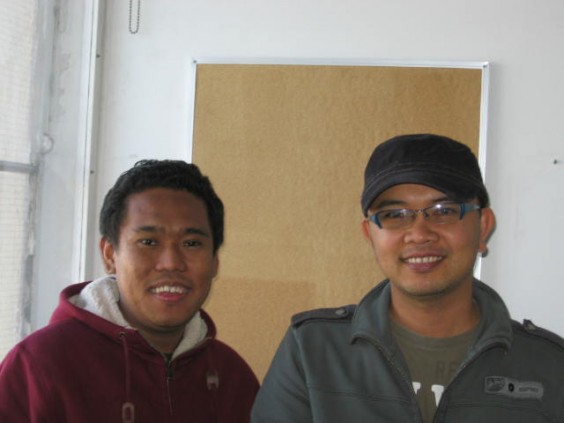 Orlando (right, in photo) said, “How about if you bring the sinangag to work and we’ll have a good breakfast with some tapa and fried egg. We call it ‘Tapsilog.'” All three of us were enthused about this idea until we remembered that we have no way to cook fried eggs at work.
With any kind of fried rice, you want to get all the elements (except herbs, if you’re using them) cooked and chopped before the “frying” begins (actually, sautéeing in my case, as I used a flat pan instead of a wok).
I put some “fancy” generic store brand frozen peas in a bowl and defrosted/cooked them in the microwave. When they were done, I set them aside. 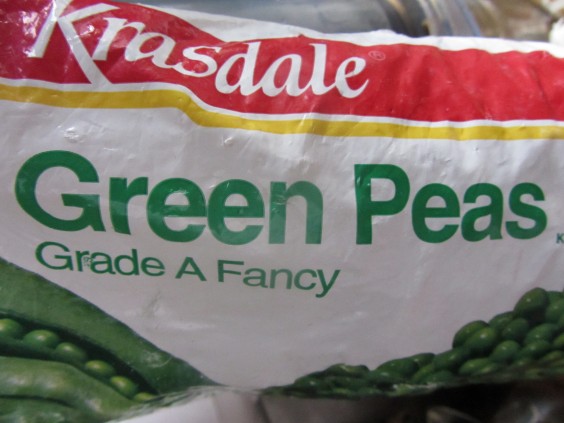 I started scrambling a couple of eggs. The secret to good scrambled eggs is low heat, minimal scrambling, and removing the eggs when they’re still slightly underdone, because they’ll cook a little more from their internal heat. That way, the eggs turn out soft and delicious rather than rubbery and tasteless.
When the eggs were done, I sort of stab/chopped them into irregular, bite-size chunks with the plastic spatula I was using in the non-stick pan. Then I set them aside. 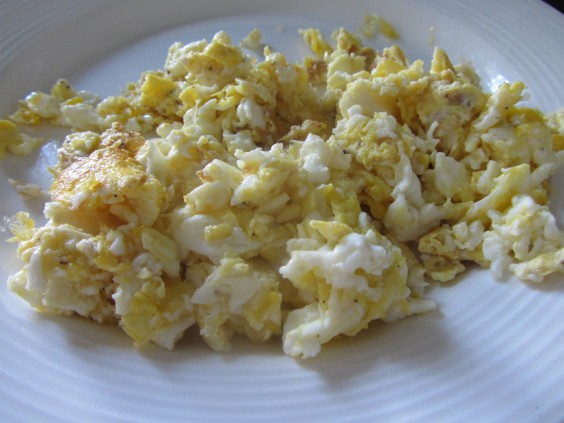 I took my leftover rice out of the fridge and broke up the stuck-together hunks so that it’d be ready to be scattered into the pan when the time came. I set that aside, too. 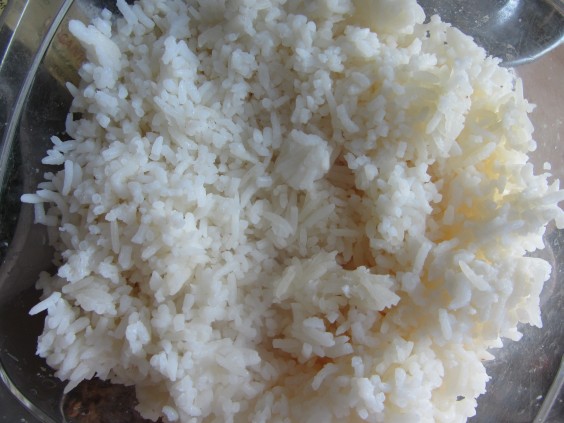 Then I cut each garlic clove in half lengthwise so that it would lay flat and stable. 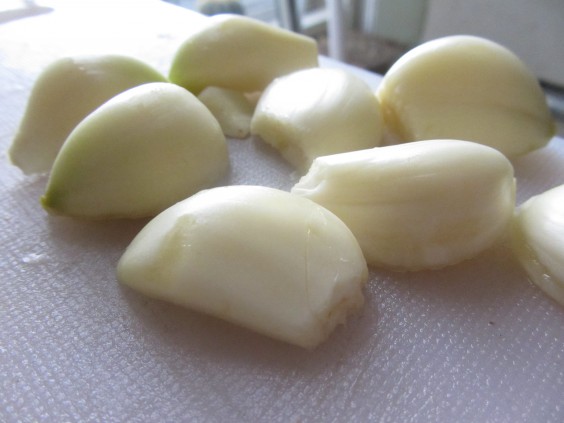 Now I was ready to ROCK. I pressed the rocker down onto a nice, fat garlic clove and rocked it back and forth to cut through the whole clove. 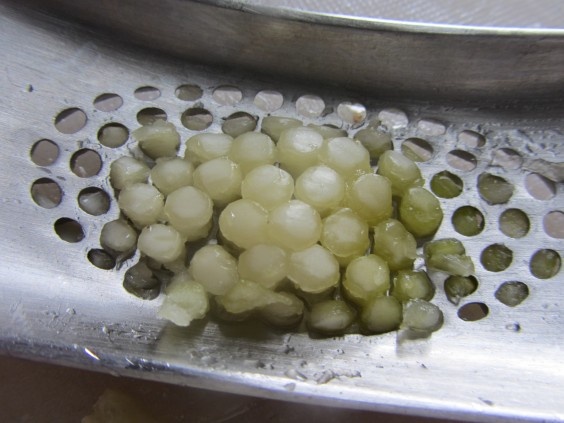 Oh, how beautiful the results were. Perfect little bullets of garlic that resembled part of a honeycomb. Without bothering to scrape off the “bullets,” I put another couple of cloves underneath the tool and pressed/rocked them, too.

Because I’m a garlic glutton, I rocked a few more cloves. Then it was time to sauté the garlic bullets.
I used peanut oil. Chinese cooks normally use it because it has a high “smoke point” – meaning it can get a lot hotter than, say, canola oil, corn oil, or butter, before it starts smoking and burning. Also, its flavor goes better with Asian food than olive oil’s does. (If you live near an Asian grocery, buy it there. It’s a lot more expensive at typical American groceries.) 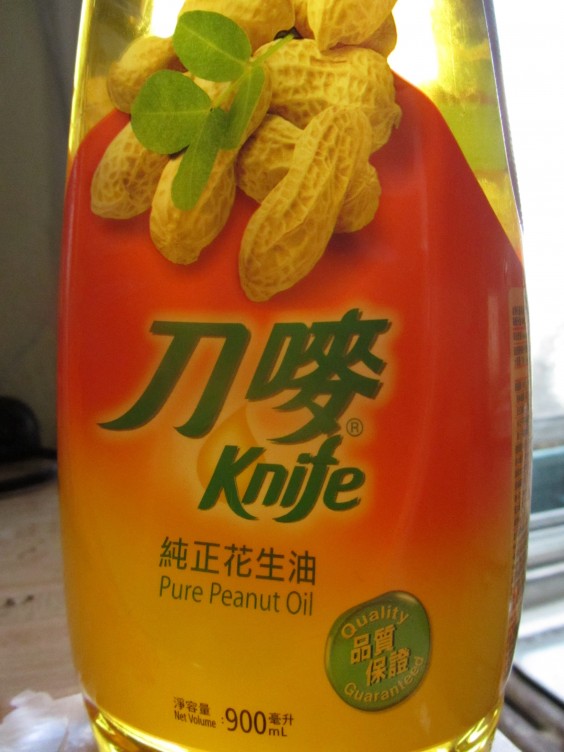 I put maybe three tablespoons more into the pan than I needed for sautéeing the garlic, so that there’d be plenty of gloriously garlicky oil left over to fry the rice with.
I’m an impatient cook and I hate to watch over things, which is why I very often overcook my hamburgers and burn my garlic. Burning garlic ruins it. It tastes really acrid and bad. So I made myself pay attention and kept the heat low-ish. I didn’t ruin it! OK, actually a few pieces were overcooked, but I deleted them. 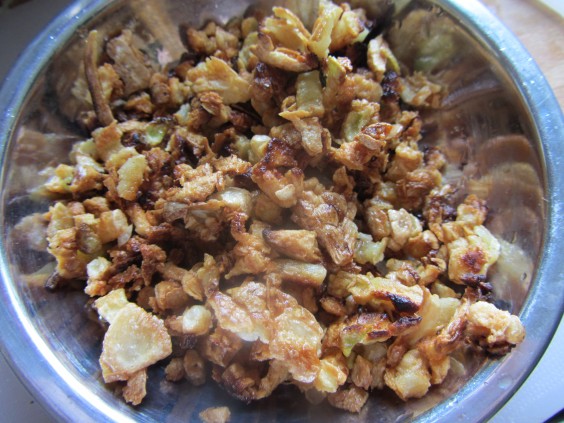 One of the recipes I’d found said to add the rice to the garlic in the pan, but I didn’t want to risk cooking the garlic any longer. Instead, I set it aside with the other prepped ingredients, leaving as much as possible of the now-flavored oil in the pan.
It was time to put together the sinangag. I raised the heat to high and added the rice, stirring it in order to make sure it all got some oil on it. I cooked it for maybe three minutes, not enough to brown it, but sufficient to get it hot and give it some of the character of the hot oil. You can smell when it’s right — it’ll remind you a little bit of popcorn cooking in oil.
I added the peas and eggs and stirred to more or less evenly distribute them in the rice and to get all three elements to flavor-kiss a bit. Then I turned off the heat, added the garlic, and stirred some more. A wave of garlic bliss came over me while putting so much into what was only a couple of servings of rice. 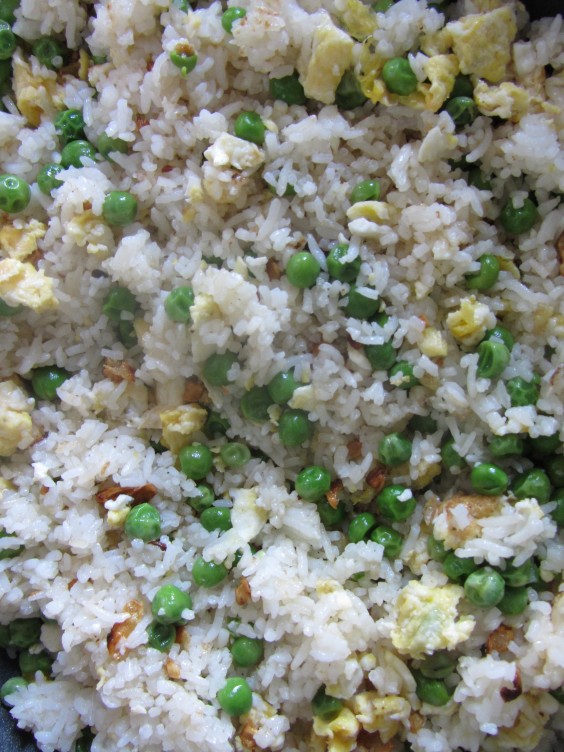 And there you have it. In imitation of the photo accompanying one of the recipes I’d found, I pressed it into a little bowl-type thingy (I don’t know what to call it because it isn’t round like a bowl — mini-crock?) and made it look all nice and photogenic. 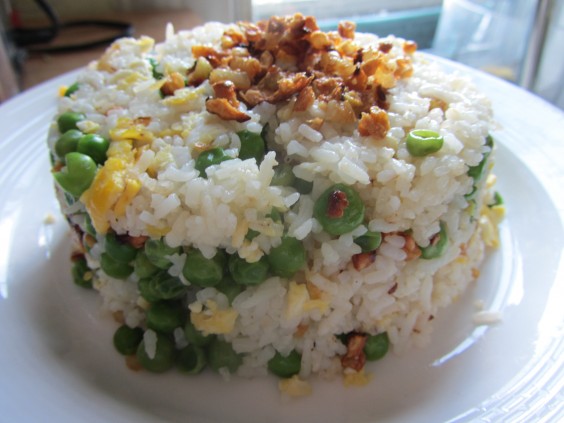 I served some of it into a bowl that I know is an actual bowl because it’s rounded, added a couple of dashes of soy sauce, and dug in. It was a beautiful, heavenly, garlic symphony, much more than the sum of its humble parts.

Ingredients
(I’m not giving amounts because it’s up to you and how much leftover rice you have.)

Preparation steps
1. Break up the rice if it’s sticking together; set aside.
2. Defrost and cook the peas. Set them aside.
3. Gently scramble the eggs; then break them up into small pieces. Set them aside.
4. Peel and cube (or “rock” – but do not use garlic press) the garlic into quarter-inch-size chunks and saute until golden–not dark–brown.
5. Set frying pan or wok on a burner and set heat to high.
6. As soon as oil has a subtle, shimmery sheen (but before it smokes), add rice and cook for about 3 minutes, until the rice is hot and perhaps very slightly browned in a few places, but no more. Turn heat down to medium.
7. Add the peas and eggs and stir to mix; cook for about a minute.
8. Turn off heat; add garlic and stir.
9. Add salt or soy sauce to taste.

Inside the Designer’s Studio with Emily Rothschild