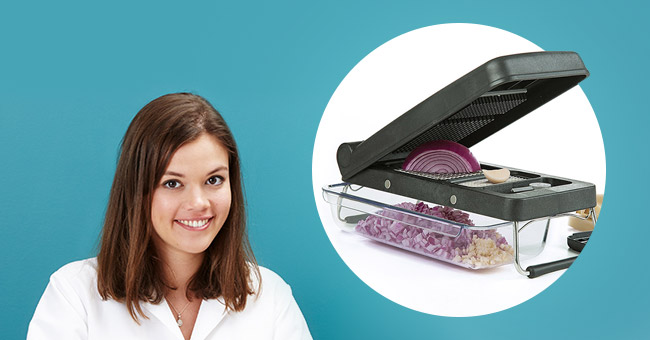 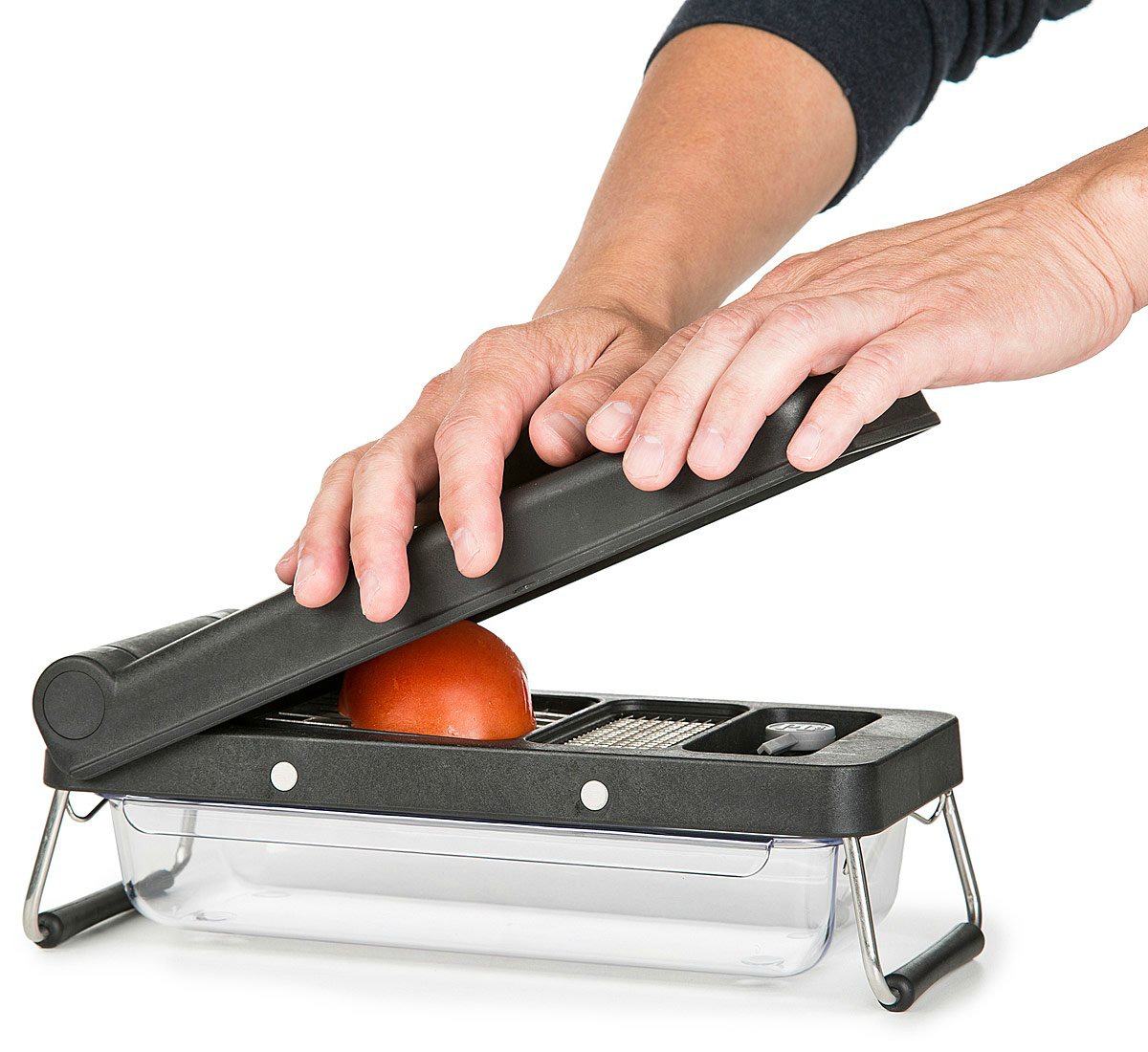 I love to cook, but I don’t love to chop. Not only am I slow, but my knife skills (or lack thereof) tend to mutilate veggies into useless blobs. I saw this gadget on the UncommonGoods website, and I knew I had to test it out.

With my new produce chopper, I’ll be able to churn out delicious dishes much faster than I could with my old chef’s knife. 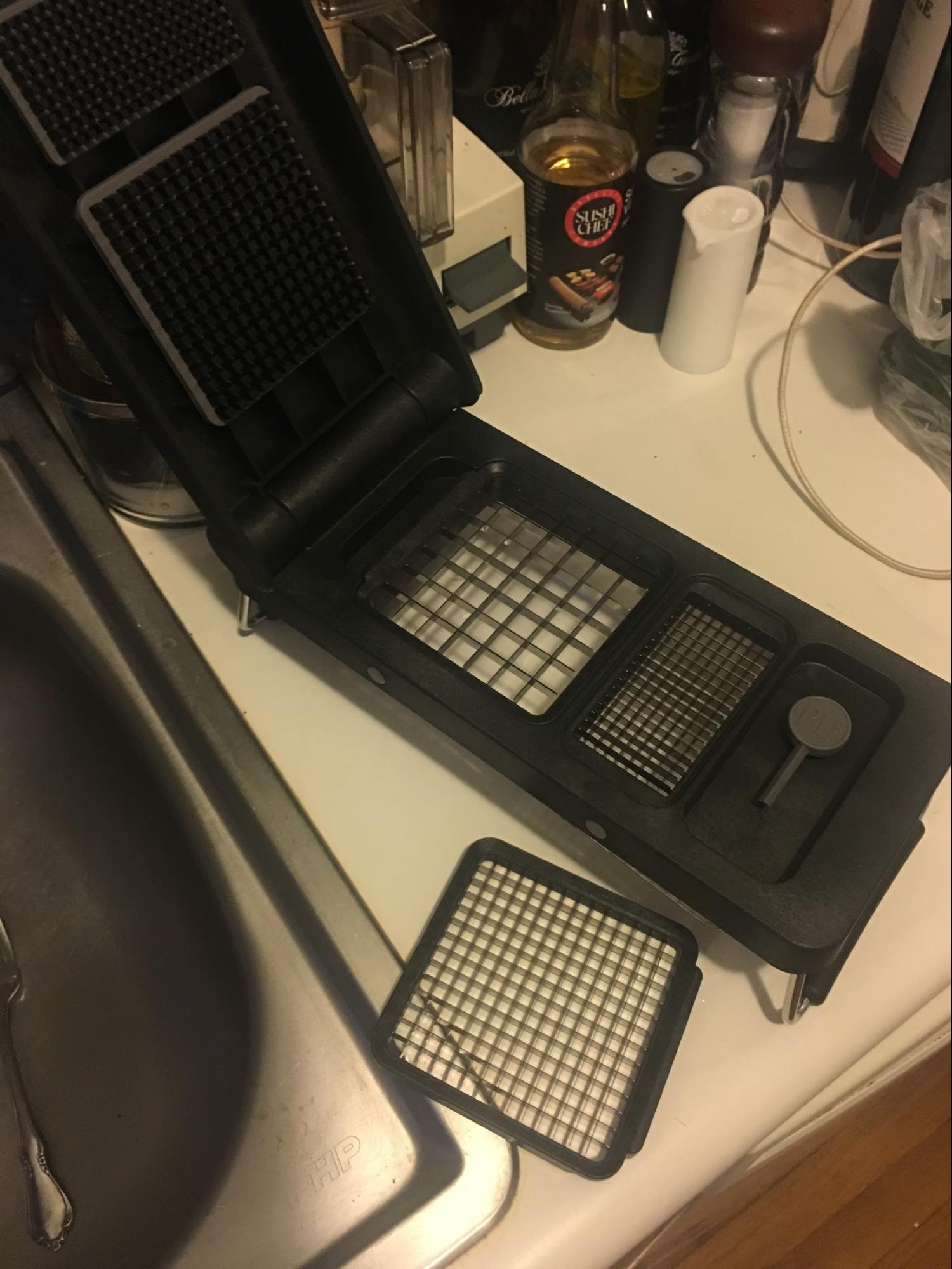 In honor of the disgusting late-winter weather, I opted to test my new produce chopper with a tasty bowl of soup. The recipe seemed really delicious, not too hard, and perfect for testing this produce chopper with. Plus, who doesn’t love a good bowl of soup on a dreary day? The recipe is charmingly unscientific, so I got to work adding measurements so others could share the same experience I had. Once I gathered all my supplies, I got to cooking.

For maximum authenticity, I hand-copied the online directions, and because this is a blog, I took a photo of (most of) the ingredients.

Step one of soup making calls for one chopped onion. I purchased a softball-sized onion that, when chopped, mostly filled the basin at the bottom of the produce chopper. I should note that investing in a pair of these goggles would be wise. When I pushed the onion through the grate, all of its tear juices were released at the same time, and the outer layers kind of smashed on the grate. This caused me a great deal of physical pain, which I would not wish onto my worst enemy. In retrospect, I think cutting the onion into quarters would have helped make this slightly more bearable. It’s also worth noting here that the chopping grate is only 3 ¼ inches wide, so most veggies will have to be pre-cut in order to fit on its surface. 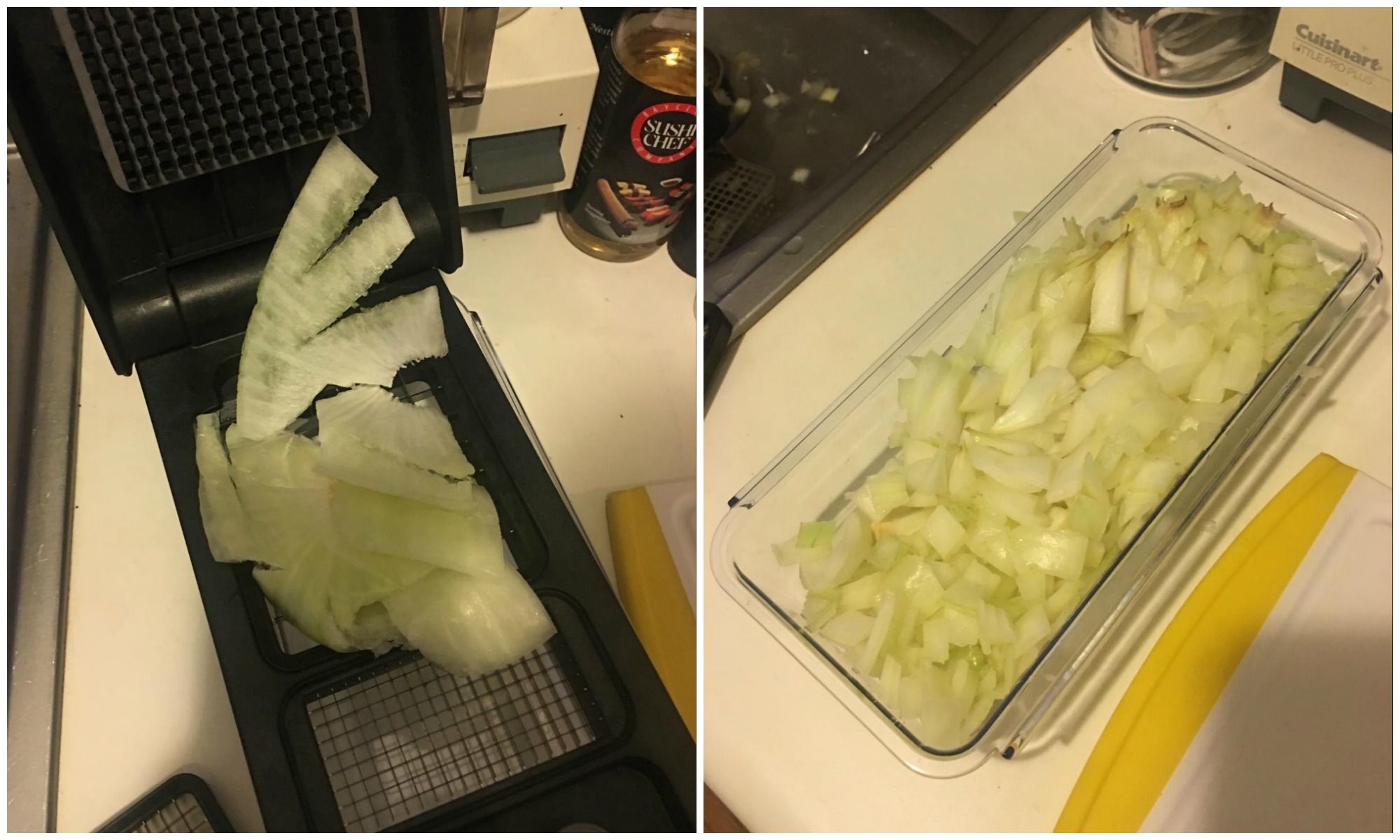 The chopped onion went into the pot with some olive oil and red pepper flakes, and cooked while I got to work on the rest of the veggies. 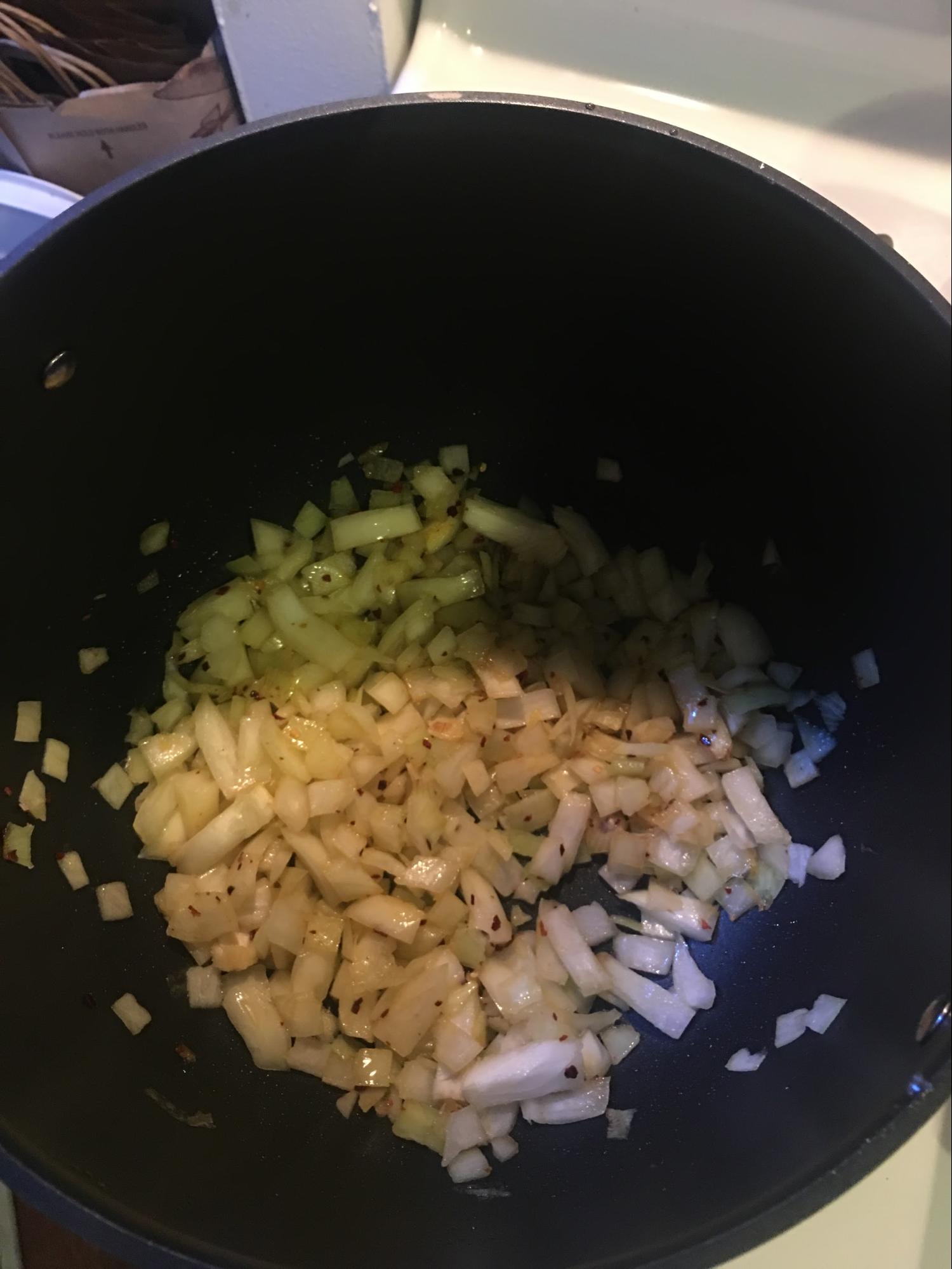 The zucchini and potato were much better fits for the chopper, and went through quickly. Regardless of what you’re cutting, the top part does take some force to get down, so don’t be surprised if you find yourself putting your back into it. 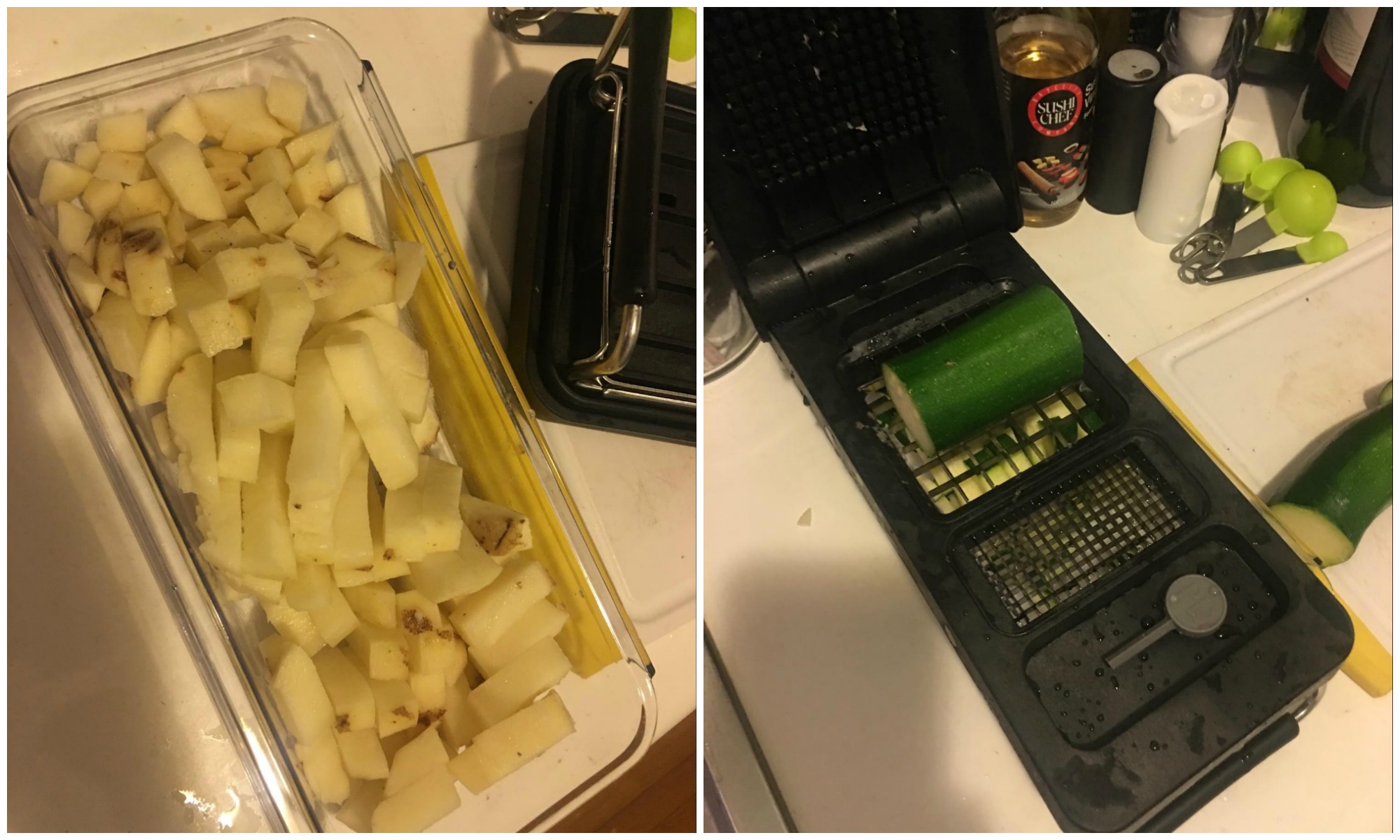 These joined the now translucent onion along with the vegetable broth to be brought to a boil, then down to a simmer. 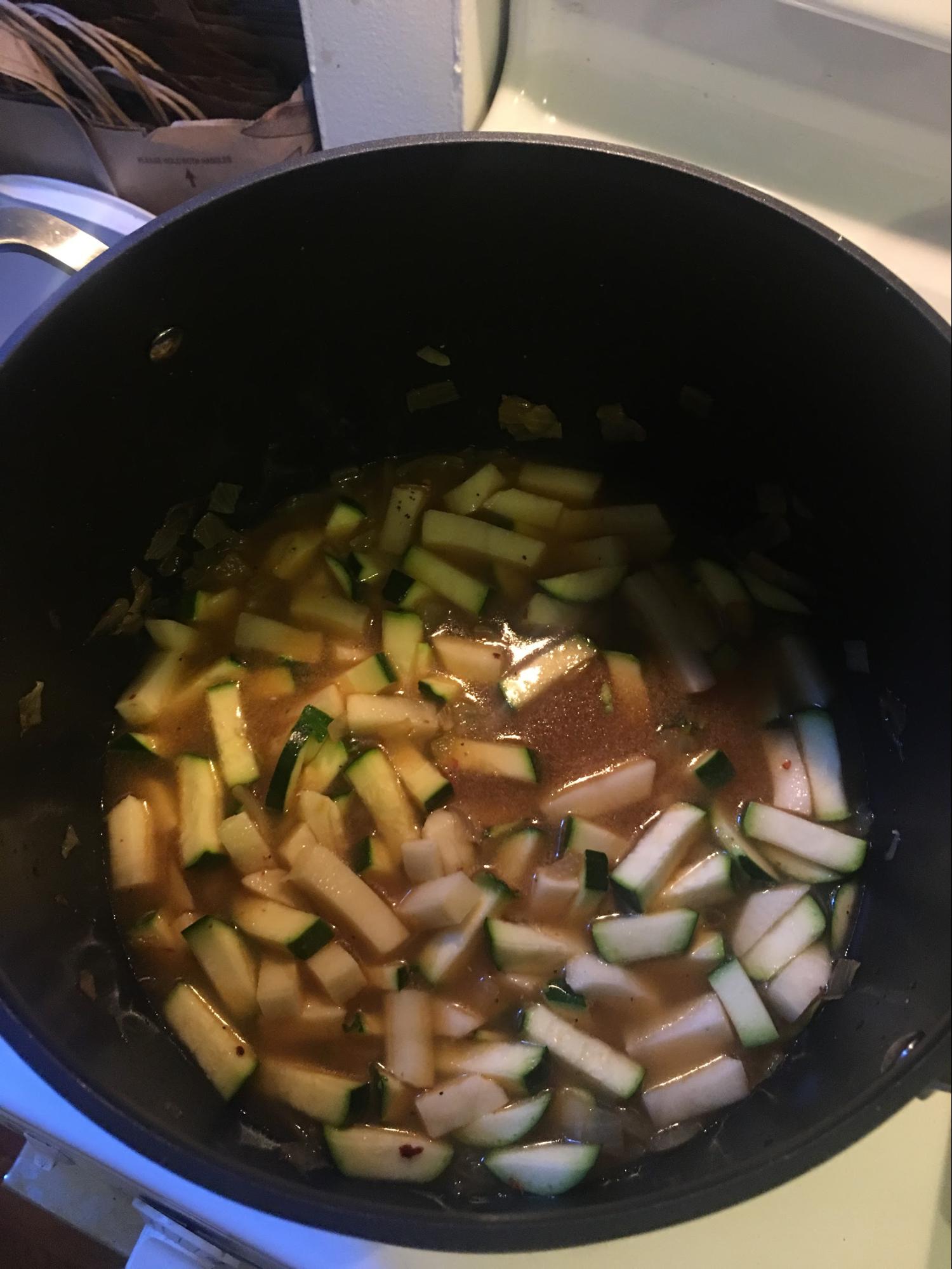 Starting to come together!

Next, the recipe called for microwaving tomatoes for 7 minutes, then removing their skins. To me, this seemed like an absurd amount of time, but I stuck to the recipe. In retrospect, they probably could have been in for about 1-2 minutes and the skin would have come off just the same. Instead, I ended up with a plate of molten hot tomato flesh (with easy to remove skins) that then had to be cut up. 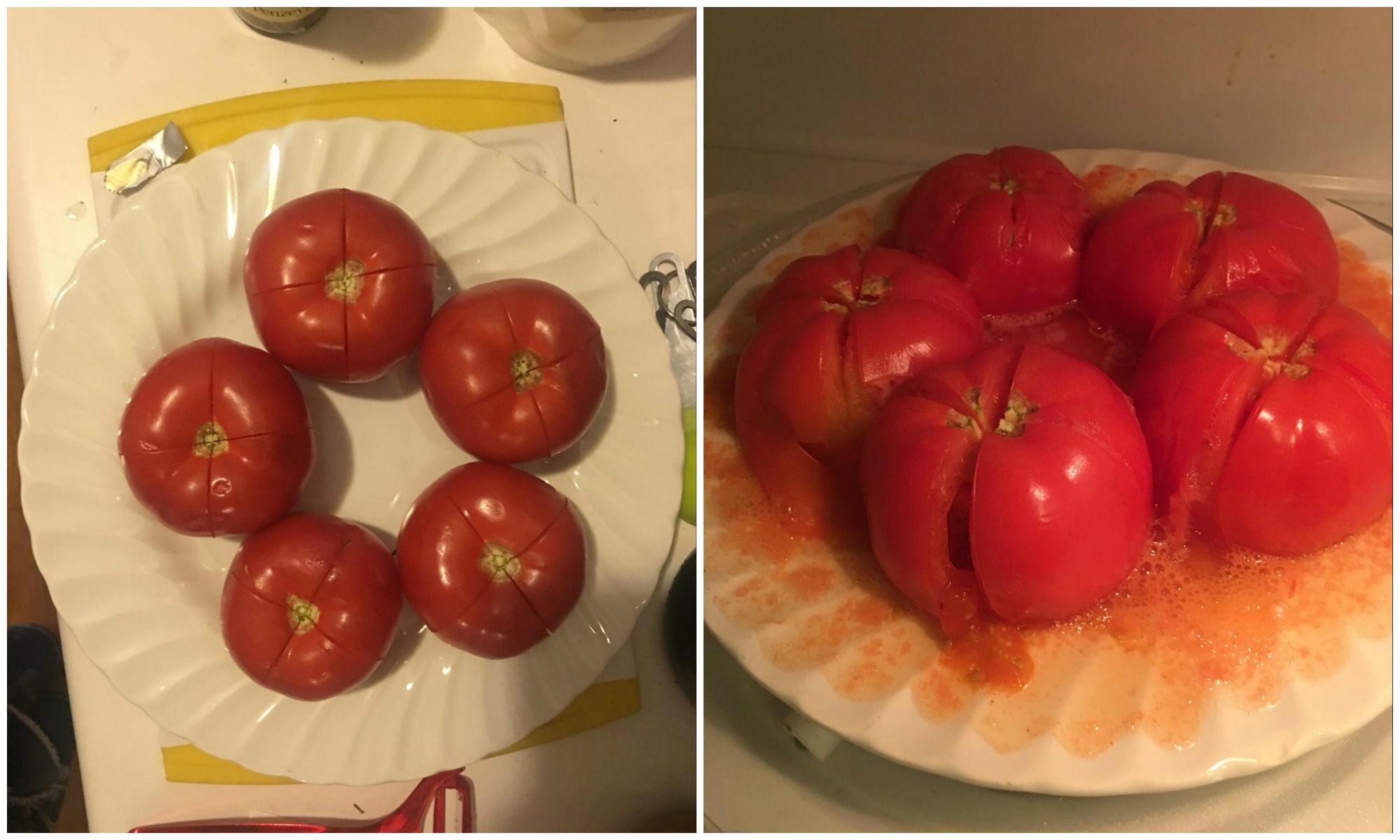 This is what happens when you microwave tomatoes for 7 minutes.

In the name of science, I used the produce chopper. This was a huge mistake. The chopper squashed the tomatoes into a pulp and made a gigantic mess, burning my fingers in the process. This being said, I would not recommend using the chopper for super watery vegetables, or anything that was just in the microwave for 7 minutes and didn’t really get a chance to cool down. 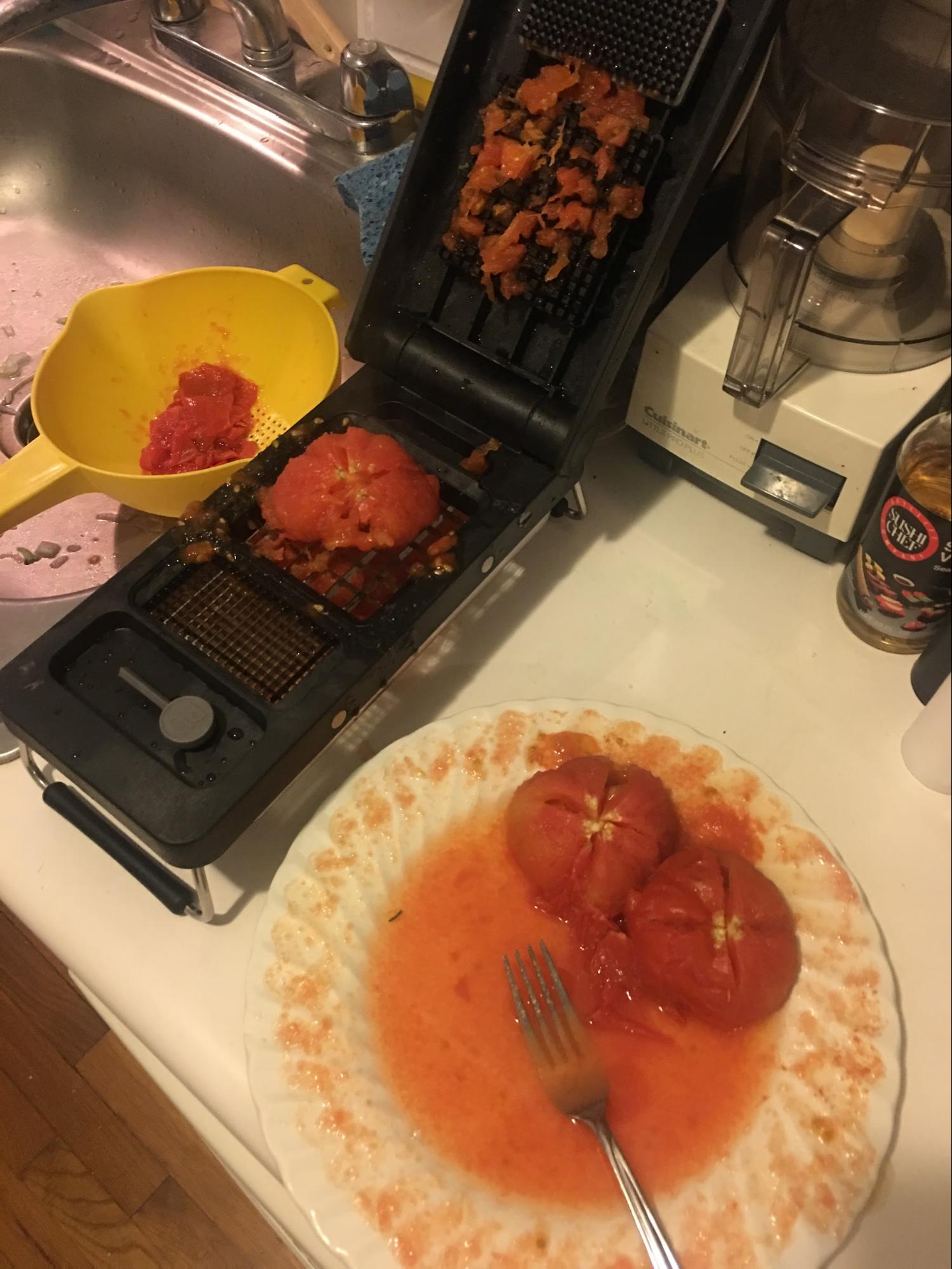 Save yourself the hassle. Use a regular knife.

Once the tomatoes got added to the pot, the soup simmered away until the potatoes and zucchini were cooked through. This took me about 30ish minutes, but could go longer or shorter depending on your equipment. This is a great opportunity to cook the pasta. I used orzo, but I would imagine the results would be the same with any shape that’s similar in size. 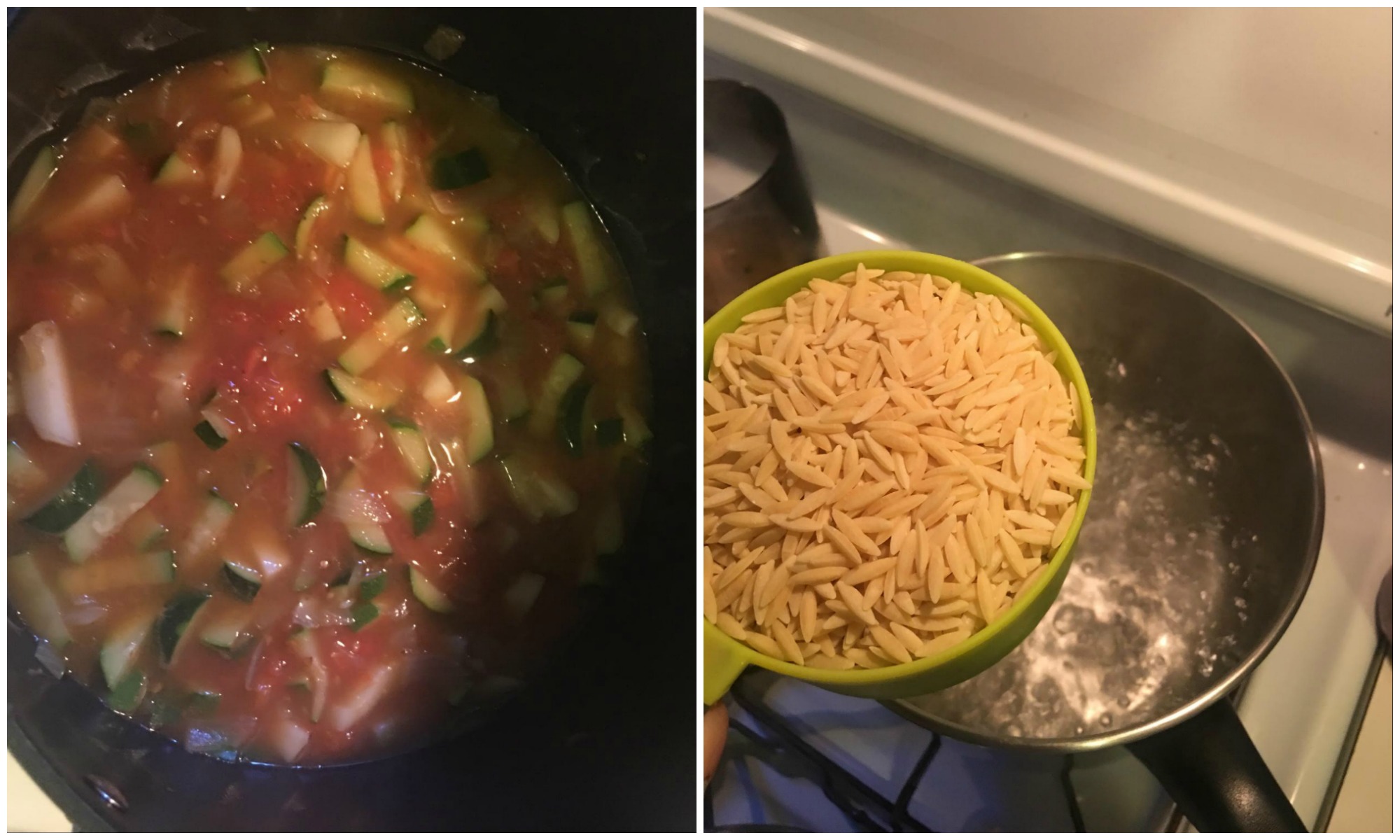 In go the tomatoes and pasta.

Once everything came together, I used my immersion blender to mix everything up, added the cooked pasta and chickpeas, and was done. 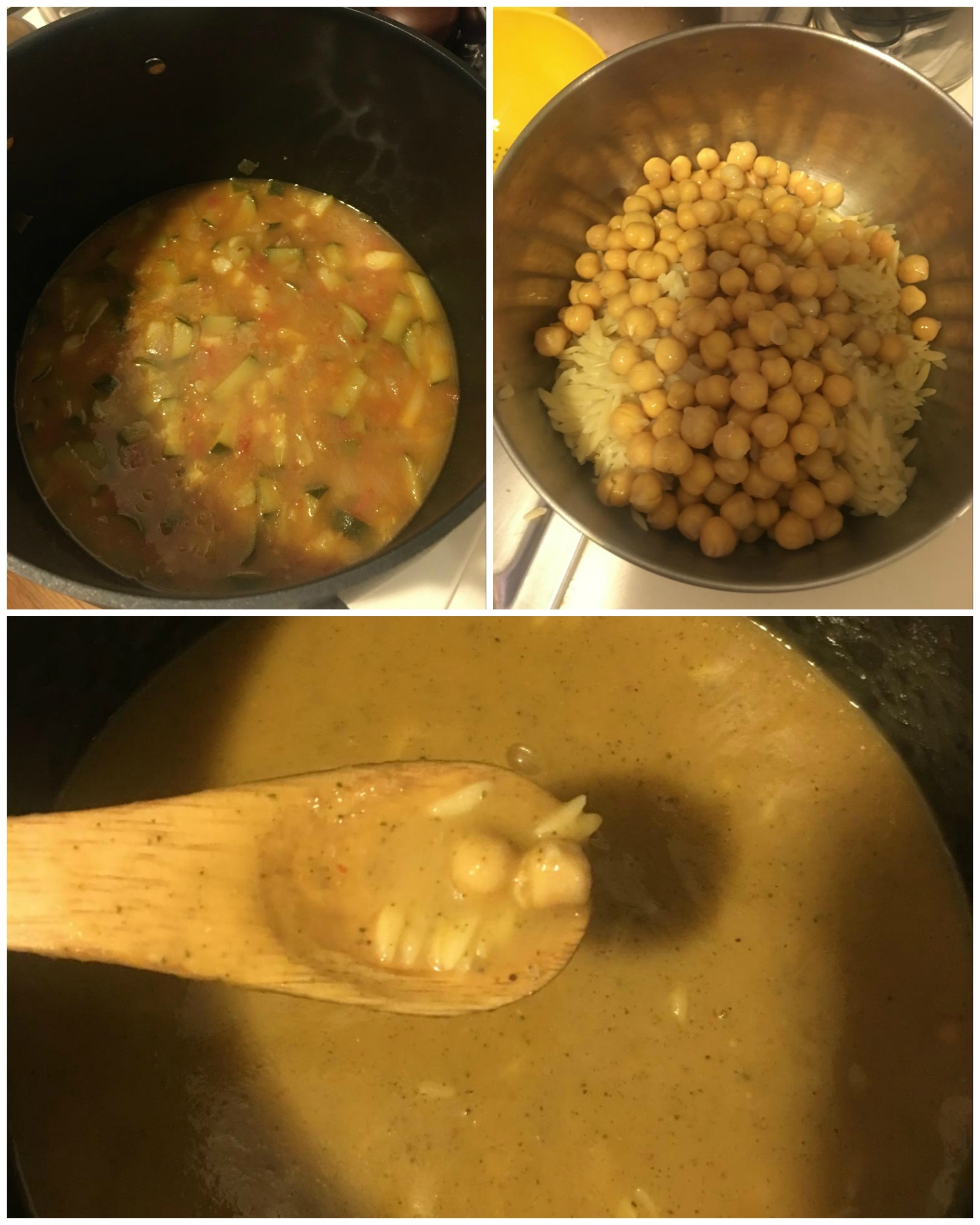 My plan was to jar up the soup and bring it to work for lunch the following week, but I had to test a bowl in the name of science beforehand. I was also famished. I added a very generous bunch of cilantro on top, and dug in. 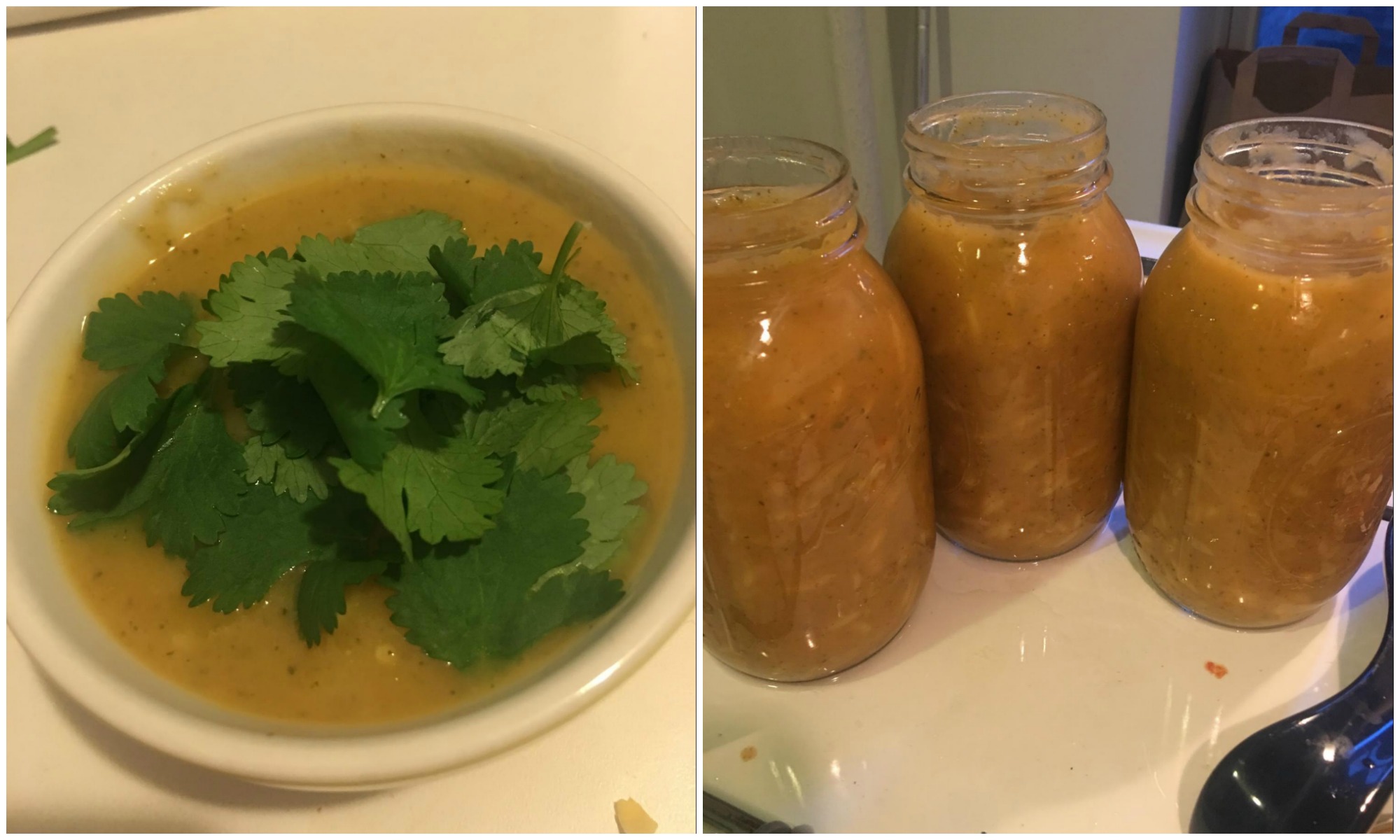 The final result was absolutely delicious. The pepper flakes added a subtle kick that complimented the freshness of the cilantro and creaminess of the potato and zucchini. It’s also great served with a drizzle (or heavy pour, if you’re into that) of hot sauce. I used 90% of the grocery-store sized bunch of cilantro I purchased for this project, but I think it would still be great without if you’re one of those people who’s genetically predisposed to hate cilantro.

Although this won’t come close to replacing your knife collection, it’s great to have around for making dishes that would otherwise feel laborious. However, I wouldn’t recommend using it with watery or very soft veggies, and quartering onions before they go into the chopper.

Get the perfect cut with your own produce chopper »

Recipe, adapted from the last one on this list:

In a large pot, heat the oil over medium heat. Add the onions and the red pepper flakes and cook until the onion is translucent.

Add the potato, zucchini, and the vegetable broth. Season with salt and pepper and bring to a boil. Once, it’s boiling, lower the heat and let it simmer.

In the meantime, carve a small X into your tomatoes, and microwave them in a bowl for about 7 minutes. Let them cool a little bit, then peel the skin and chop them. Place the tomatoes in the pot with the rest of the soup and let it simmer until all the vegetables are tender (about 40–45 minutes).

Ten minutes before your veggies are done cooking, cook your pasta until al dente.

Once the vegetables are tender, blend the soup, either with an immersion blender or in a blender. Season with salt and pepper and keep it warm over low heat.

Drain your chickpeas and add it to the soup. When you’re ready to serve, add the pasta to the soup and some chopped cilantro.

Jackie is a PR & Social Media Associate at UncommonGoods.

Staff Picks of the Week