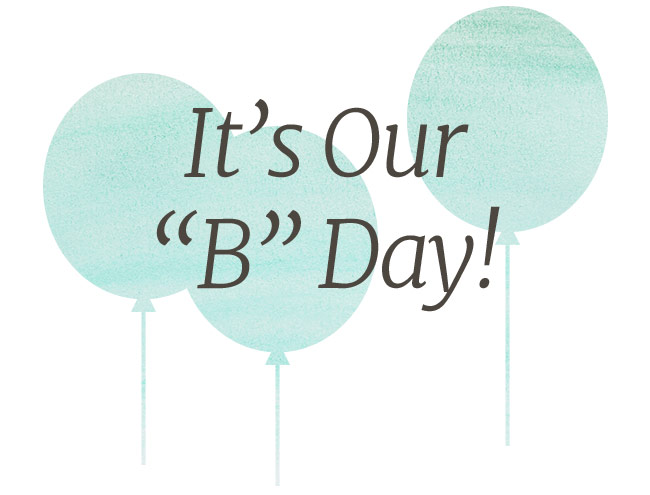 Throughout the month, we are celebrating our 10th “B” Day! (Not to be confused with the birth of our company that happened waaay back in 1999.) Our “B” Day commemorates our official initiation into the B Corp community, a community of businesses that have successfully passed a B Corp Assessment. The assessment scores companies on how they’re building better businesses by taking care of their workers, their customers, the community, and the environment. In 2007, we stood with 42 other companies and signed a declaration of interdependence proclaiming our mission to use our company as a force for good. Over the next few weeks we’ll be celebrating this in ways that relate to all of the key areas that are measured by B Lab (the non-profit that is in charge of the B Corp Assessment and the certification process). In honor of this exciting anniversary, we’re taking a look back on what’s happened through the years with our B Corp score, the B Corp movement, and to throw in a little extra fun, the world at large over this decade-long stretch.

B Corp: And so it begins! Our first Impact score: 97
UG: In searching for an assessment process to internally audit our practices to show that we are practicing what we preach in terms of our societal and environmental commitments, our founder and CEO, Dave Bolotsky, committed UncommonGoods to be a founding B Corp. We’re one of 43 companies to be recognized with this distinction.
And also this: The seventh and last book in the Harry Potter series is released.

B Corp: The first B Corp Champions Retreat is hosted in California.
UG: We say so long to Manhattan and complete our move to the Brooklyn Army Terminal.
And also this: Barack Obama is elected, becoming the first person of color to serve as president of the United States.

B Corp: The number of certified B Corps grew to 205 in 54 industries in 28 states.
UG: We make it Facebook official.
And also this: Water is discovered on the moon.

B Corp: Forbes runs an article about corporate responsibility that focuses on B Corps.
UG: Our second B impact assessment is submitted, we score a 106.
And also this: The iPad arrives.

B Corp: B Corp Reaches 500 Companies!
UG: We helped plant hundreds of trees (1,400 to be exact!) in Marine Bay Park as part of the MillionTreesNYC initiative. After over a year of tenacious persuasion tactics we also convinced city officials to make the landscape more appealing by planting street trees around Brooklyn Army Terminal.
And also this: The planet Neptune completes its first orbit since its discovery in 1846.

Our 3rd Assessment: 99
B Corp: Ben & Jerry’s joins our B Corp Community.
UG: Dave, our Founder and CEO visited the White House to meet with President Obama, Vice President Biden, and their economic team as one of 15 small business leaders asked to participate in a discussion on the Administration’s approach to the economy and the fiscal cliff.
And also this: Hurricane Sandy hits the Northeast.

B Corp: The movement continues to gain traction globally, with international companies accounting for 25% of the total community.
UG: We implemented a paid volunteer day for every team member–giving all year-round team members the opportunity to take a day off to give back to the community.
And also this: Netflix original shows prove that internet produced television is not a fluke by earning 14 Emmy nominations.

Our 4th Assessment: 111
B Corp: The B Corp community launches the B the Change campaign with this video explaining B Corps.
UG: Thanks to the support of our amazing customers, we reached over $1 million in donations to our Better to Give Partners.
And also this: Ice Bucket Challenge raised $220 million for the ALS Association.

B Corp: New Seasons Market’s Wendy Collie speaks to the B Corp community about raising the minimum wage.
UG: We bring our first financial empowerment counselors on site and partner with a federal credit union to help provide our team with support in their short and long-term financial goals.
And also this: The Supreme Court rules in favor of same sex marriage, making it legal in all 50 states.

Our 5th Assessment: 120. We are selected as a Best for the World Honoree in the category of Community.
B Corp: In partnership with the NYCEDC, B Lab brings B Corp values to businesses in NYC as part of a campaign called “Best for NYC.” We were selected Best for NYC for key impact areas including Best for NYC Overall. We also launched our first ever campaign with Kickstarter, a fellow B Corp. (2016 was a big year!)
UG: We released our Seven Guiding Principles to the team. #1: We are a force for Good. We use our business to help improve the world.
And also this: Hamilton wins 11 Tony awards.

B Corp: Over 50,000 companies have used the B Impact Assessment to measure their impact on their workers, community, and environment. More than 2,200 businesses are now certified B Corps.
UG: We’re renovating our office to  improve our space in terms of spreading natural light and being generally awesome for the team. We also launched our Causes Page to advocate for policies close to our hearts.
And also this: The state of Washington joins four other states in mandating paid family leave .

Our Guide to Third Anniversary Gifts: A Love as Tough as Leather

Our Guide to Fourth Anniversary Gifts: A Fresh Take on Fruits and Flowers