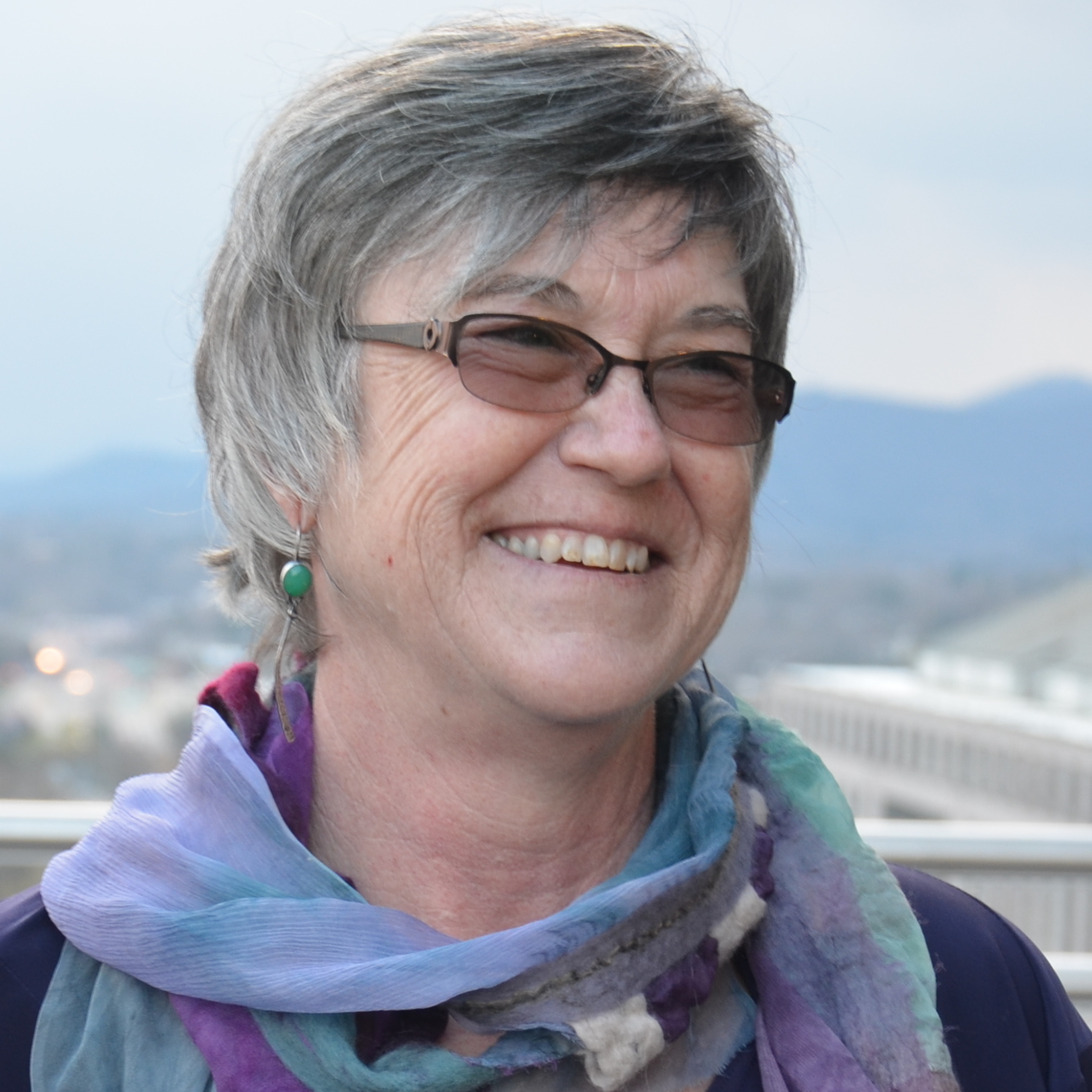 Catherine Murphy has always been an observer. From the rich architecture she saw shuffling around European cities as a child, to the awe-inspiring complexity she’s discovered in nature, Catherine’s brain is a mosaic of interwoven experiences. Today, she fuses these influences into stunning designs for your garden at the Haw Creek Forge. Nestled on the edge of the French Broad River in Asheville, North Carolina, you might find Catherine and her team of artisans collaborating on a new idea or welding shiny plates of copper into praying mantises and hummingbirds. We had the pleasure of learning more about Catherine’s process and her magnificent journey to becoming a metal artist. 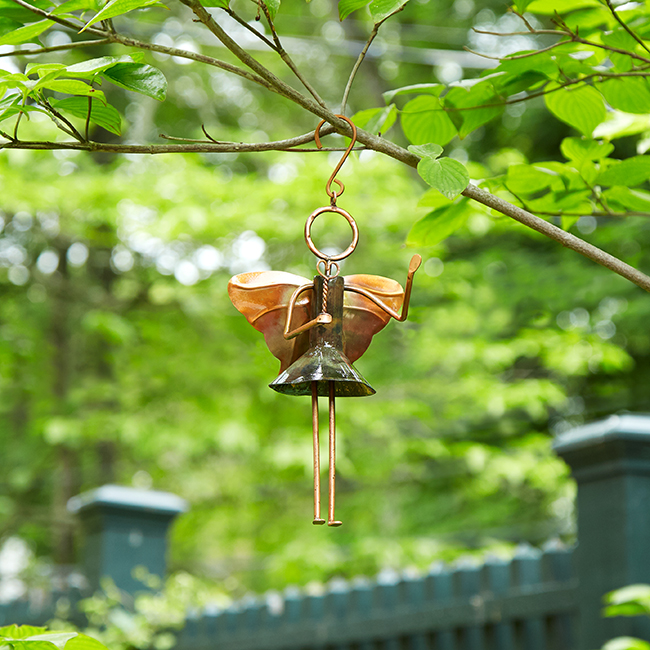 Catherine’s garden fairy makes an enchanting addition to your yard.

My first design was a dragonfly at the age of 36, built for my personal pond. I was inspired by the dichotomy of transforming raw industrial materials into representations of living things. It’s much in the same way that alchemy turns base minerals into gold.

My favorite design is the praying mantis stake, for many reasons. I have always enjoyed the sleek, minimal aesthetic that the praying mantis possesses while simultaneously being a complex layering of parts. The praying mantis has an alien-like, otherworldly appearance that makes it a fascinating subject for an art study. 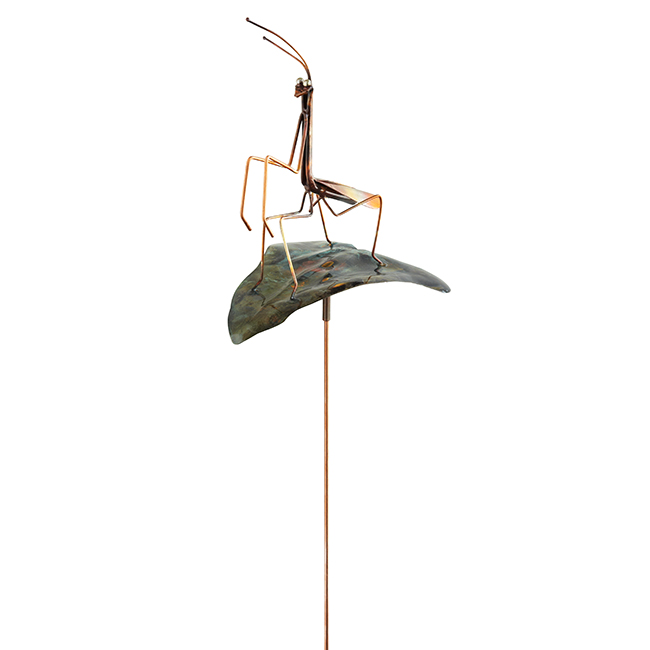 The praying mantis is one of Catherine’s favorite designs.

As a child I was rebellious and adventurous. These characteristics were amplified when I moved back from Europe at age 12. The shift from a large worldview to a small town was both dramatic and transformative. Today, I’d describe myself as introverted, mischievous, creative, playful, and observant.

I grew up in several locations because my father was in the service. We started in Alexandria, Virginia, moved to Heidelberg, Germany, Vicenza, Italy, and, when I was 12, Hendersonville, North Carolina. Living in Europe at such an impressionable age affected both my artistic sensibility and my trajectory. The durable beauty of the architecture showed me what something could be if it was made right, and how artists’ creations affect whole cultures.

I have always been influenced by nature. When I was a child I had an insect collection, and was always fascinated by observing and later mimicking the multitude of complex parts in all their working beauty.

Asheville is a place of inspiration, because it is a community of makers. Like attracts like, as well as inspires it. Haw Creek Forge has been operating in Asheville since before the advent of the infamous River Arts District, making it a classic Asheville institute. On a typical morning in the ’Ville, I explore the city and wander through various nooks and crannies like little pearls of inspiration. HCF is one of those little pearls waiting to be discovered. 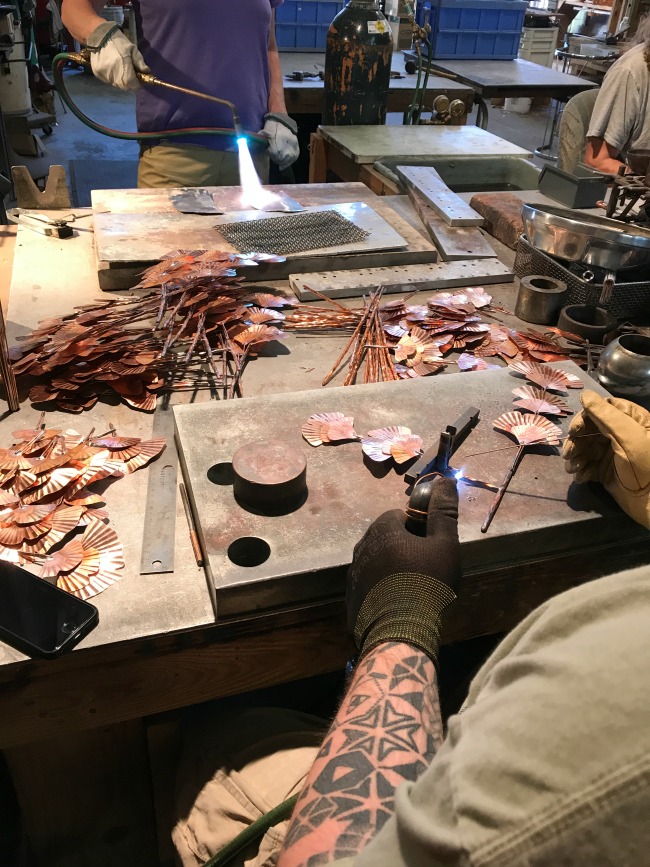 Haw Creek Forge is a repurposed factory sitting directly on the French Broad River. It’s filled with beautiful old tools mixed with modern conveniences for metalworking. We share a space with other artists, which creates an atmosphere ripe for ideas and collaboration.

My typical day is very dependent upon a working routine, which is one of collaboration. I don’t see myself, or my work, as separate from my team. I carefully chose them for their competence, creative vision, and like-mindedness. My role, in addition to creating whimsical aesthetic beauty, is helping creative individuals flourish. This has been my biggest passion.

My two biggest influences are Charles Lewton Brain and Alexander Calder. Charles’ forming techniques birthed a whole line of inquiry in techniques that are still playing out for me today. And Alexander Calder’s unorthodox approach has influenced me tremendously. It has helped me insert my weirdness into my art, and transform the parts of me that can’t be shaped into gold.

As far as my designs go, there is no end to what can be. Our team has several irons (literally) in the fire at all times, and the gears are always turning. 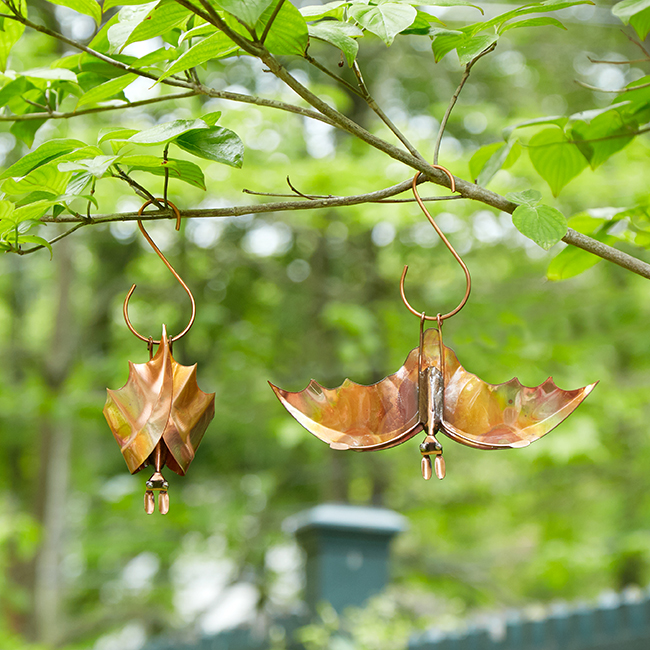 Friendly bats greet you on your way into the house.