Doing Good, in Brooklyn and Beyond:
A Look Back at 2017

At UncommonGoods, we strive to be more than a business: We strive to be a force for good. In addition to providing one-of-a-kind, high-quality handmade goods to our customers, we’ve made it our mission to use our business to help improve the world we live in. As an independently-owned company with 18 years under our belt, we’re lucky to have the freedom to act according to our convictions, providing our workers with a living wage and a generous paid family leave policy, donating thousands annually to our Better to Give partners, and supporting makers who create a positive social and environmental impact wherever possible.

Of course, this isn’t all that we do each year. There’s a lot that goes on behind the scenes to ensure we’re supporting causes we believe in as effectively as we possibly can, and we’re always trying to make sure that UG is a great place to work. (Side note: Being a great place to work, like most things, requires a lot of trial and error, and we don’t pretend to have all the answers, but we do know that being open to change and putting our employees’ needs first are key points for us.) This year, we’re letting you in on our proudest achievements, from work we’ve done within our Brooklyn warehouse to relationships we’ve built with new nonprofit partners. Read on for more on what we’ve done #InsideUG, with our Better to Give partners, and within the B Corporation community. 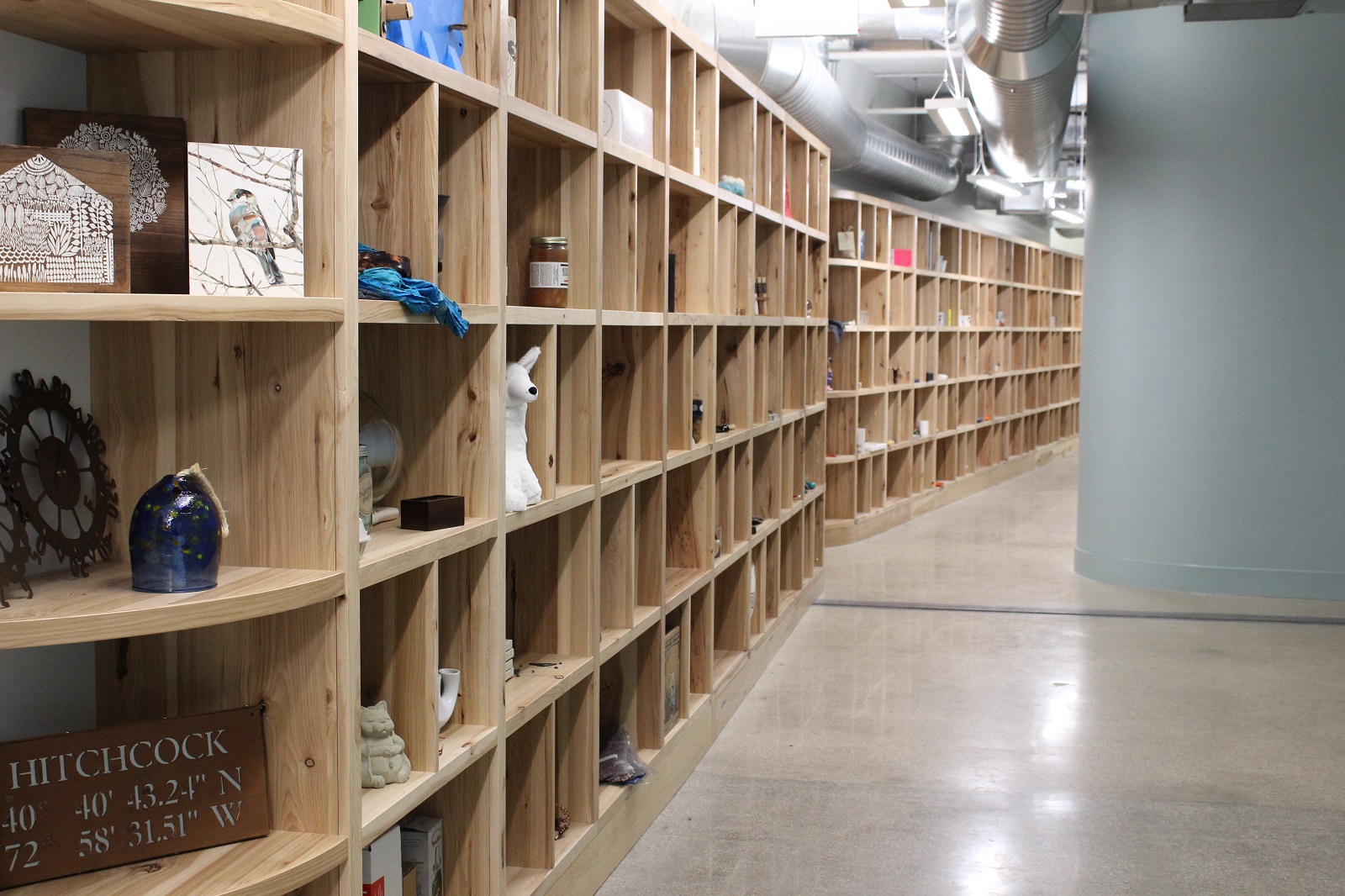 Samples line the walls in our newly renovated office, complete with custom woodwork.

Here at UncommonGoods HQ in Sunset Park’s historic Brooklyn Army Terminal, we’ve made some improvements of our own. In June, we announced the launch of our Guiding Principles, a series of seven carefully formulated standards by which we at UG strive to lead our professional lives. With values like We Are a Force for Good, We Are Open-Minded, and We Are Always Learning, we’re encouraged to foster a culture in which we respect one another and consider our company’s impact on the world. (But more on that later.) 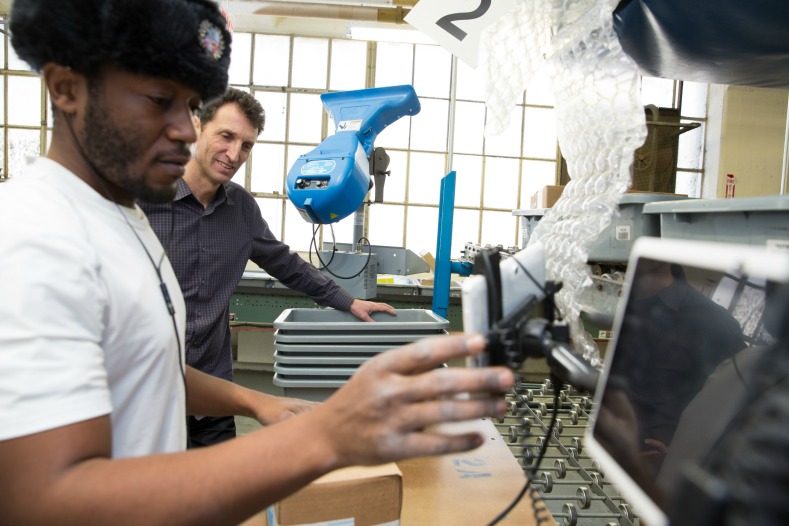 Also of note? In August, we said bye-bye to inflated plastic packing material, introducing recyclable, compostable paper-based alternatives from Emerald Brand. Made from 80 percent post-consumer fibers, our new packaging saves enough water to fill 1,348 bathtubs each year, compared to packaging made from virgin tree fiber—and it brought us some of our favorite customer feedback from the whole year. “THANK YOU for switching from plastic packaging!!!! This is the type of thing that definitely impacts which companies I use when I shop,” wrote one customer. From another: “Thank you for your commitment to sustainability and the planet. The world needs more companies who will live out these values.” 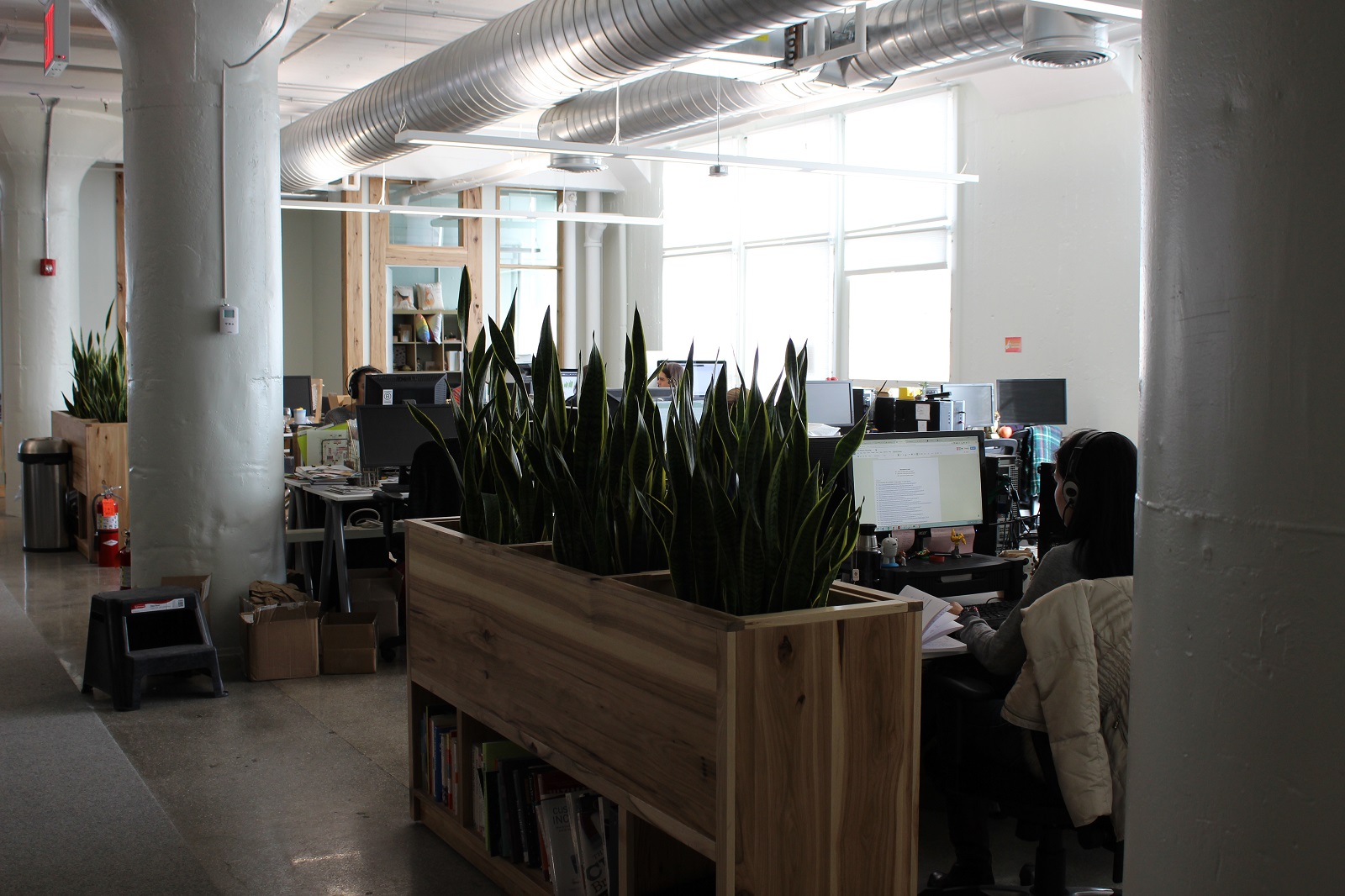 Let there be light! And air-purifying plants.

Less than one month after ditching puffed plastic, our staff said hello to a newly renovated portion of our office, complete with custom woodwork, plenty of plants, and lots and lots of natural light. As we’d say in Guiding Principle-ese, We Are Building for the Long Term. (Literally.) 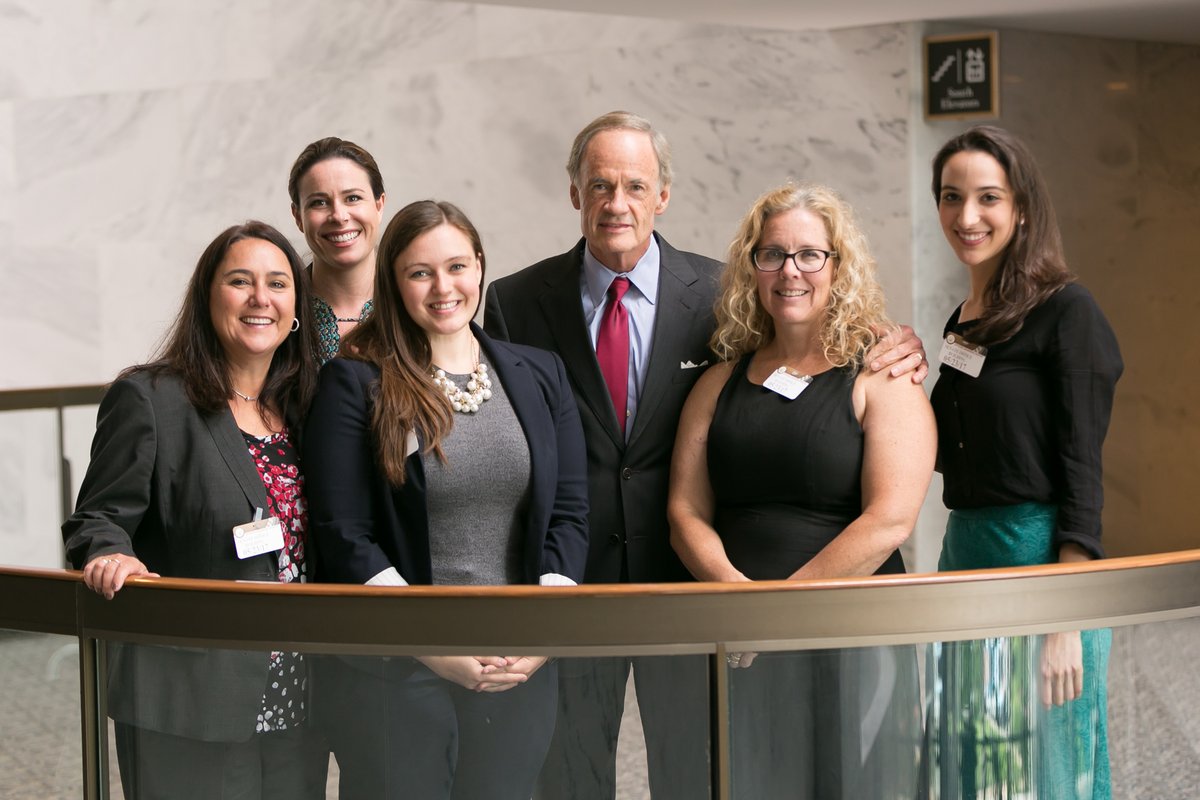 It’s also been a big year for advocacy here at UG. In July, we launched our Causes page, a one stop shop for detailed information on three of our most important campaigns: Wildlands for Wildlife, a joint venture with longtime Better to Give partner American Forests; our fight to address (and eventually eradicate) the rape kit backlog alongside fellow partner RAINN; and our push for paid family leave nationwide. Months earlier, for International Women’s Day, we launched our interactive paid family leave map, and in April, we announced a temporary partnership with Family Values @ Work, a network of coalitions in over 20 states working to pass paid leave policies—and this year, through our Better to Give program, we raised over $7,900 in support of their work. Together, we also launched our Work/Life Balance Keychain, which continues to raise money for FV@W. (Another partner? Americares, with whom we teamed up to aid victims of disaster in Texas, Puerto Rico, and other affected areas after this summer’s spate of hurricanes.)

In May, we published one of our biggest efforts of the year, “Paid Family Leave: Why It Matters.” Later republished on Medium, our post details what paid family leave means and why it’s important to implement nationwide, with detailed accounts of how UncommonGoods’ policy has affected our team members, from new parents to caregivers of ailing relatives. In June, Jen Coleman, UG’s PR & Social Media Manager, even headed down to DC in support of the FAMILY Act, which would provide up to 12 weeks of paid leave each year to qualifying workers for the birth or adoption of a new child, the serious illness of an immediate family member, or a worker’s own medical condition.

We also introduced a brand new permanent Better to Give partner this year. 826 National, a network of chapters across the US, helps kids ages 6-18 flex their mental muscles by developing writing skills and building confidence through after-school tutoring, field trips, workshops, and more. One of the coolest things about 826: Each of their writing and tutoring centers is disguised by a fanciful storefront. Here in New York, students and volunteers—like some of our staff—can pay a visit to the Superhero Supply Store before they put on their thinking caps.

We toasted our other partners throughout the year, too, launching a special collection of prints in support of American Forests and a moonstone necklace designed in partnership with RAINN. On RAINN Day, an annual day of action designed to raise awareness and provide education to college students about sexual violence on campus, we published further details on our campaign to end the rape kit backlog. Even earlier, we discussed volunteering with the organization’s National Sexual Assault Hotline with Tanya Castin, a Junior Assistant Buyer in Children’s and Leisure here at UG. Through it all, we’ve maintained our support for the IRC, doubling donations sent their way in February and taking a stand in the face of the Supreme Court’s decision to partially reinstate President Trump’s travel ban back in June.

Amid this work, we’ve received some amazing feedback from our customers. “Hi,” wrote one. “I b#*%!ed at a company today for their sexist products so it seems only fair that I take the time to praise yours. Just looked through your last catalog… ‘nevertheless, she persisted,’ ‘glass ceiling,’ ‘hear me roar,’ ‘wonder women,’ your charity partners and commitment not to carry products made from the dead bodies of animals… you f$^@ing rock. So, thank you for that. And because of you, today, I’m making a donation to RAINN. Keep it up. You may quietly revolutionize business.” 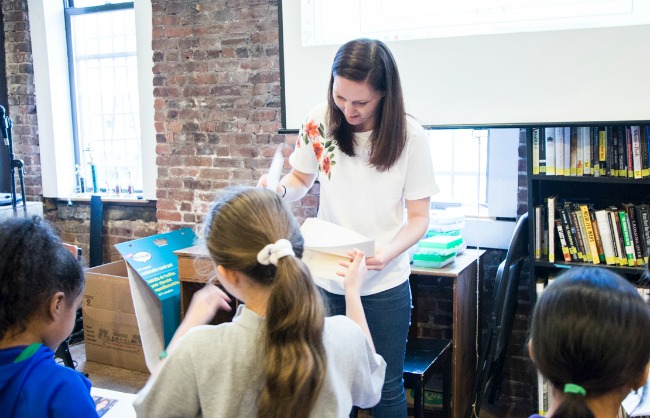 UG Email Coordinator Erin Starck volunteering with 826 back in May

Artists weighed in, too. “I’ve been lucky enough to work with UncommonGoods as an artist over the last ten years,” wrote maker Tiffany Ard, “and I can tell you that their values really are part of every decision they make. This isn’t a company that just randomly decides to throw political opinions around.”

And I’ll keep fighting for it in the Senate every single day. https://t.co/POsPiXyAFX

Of course, we’re not only sharing all this to toot our own horn, proud as we are of our work (and happy as we are that our artists and customers appreciate it, too). We’re sharing it because every day, we’re impressed by the work our partners do, and we believe they deserve our active, vocal support, Better to Give donations included. Without our partners, our world would miss out on some much-needed resources, like RAINN’s National Sexual Assault Telephone Hotline, which has helped over 200,000 people this year, and 826 National‘s seven chapters nationwide, which served over 32,000 students in the 2015-2016 school year. They deserve your support—and a big round of applause!

In addition to taking pride in our advocacy campaigns, we at UG are especially pleased to be part of the B Corporation community, with whom we’ve worked very closely this year. In May, when Afghan B Corp Roshan lost their offices and over 30 employees to a deadly bombing in Kabul, we donated $1,000 in support of their efforts to rebuild. In September, we learned we’d been named one of B Lab’s 2017 Best for the World Honorees, a celebration of our “use [of] business as a force for good: good for workers, good for communities, good for the environment.” And later in the month, inspired by B Lab, we even launched our very own Medium account, where we share content related to our campaigns and advocacy work. (We’re also an author in their publication, B the Change.)

Perhaps our favorite B-related celebration this year was the toasting of our 10th year as a B Corp, otherwise known as our 10th “B” Day. Way back in 2007, we joined 42 other companies, including King Arthur Flour and Seventh Generation, in signing a declaration of interdependence that proclaimed our mission to use our company as a force for good. To commemorate the 10th anniversary of our official initiation into this illustrious, we dropped “B the Change” buttons good for a $100 UG gift card into 10 random orders on July 17, just one day after we shared a timeline of achievements within the B Corp community and beyond.

We know this post is a bit of a long read, so if you’ve made it this far, we’ve got two words: thank you. We feel incredibly lucky to be a part of such a supportive, inspiring community and to have the opportunity to make a difference alongside our nonprofit partners. It’s important to us to share and support their work, and we’re  very fortunate to have the platform to do so. But wait. You’re still hungry for more year-end goodness? Here—have a few things that didn’t fit neatly above…

In July (and again in November), we joined in the fight to defend net neutrality; just weeks ago, we celebrated our third Giving Tuesday, doubling donations to our Better to Give partners on Tuesday, November 28; and in January, our founder and CEO, David Bolotsky, presented at the awards reception for the Game Changers of the 21st Century Workplace, hosted by the New York Paid Leave Coalition, nabbing a photo with Gloria Steinem in the process. Although we’re not perfect—that’s part of the reason our Guiding Principles exist, after all—we’re proud of all we’ve accomplished this year, and we’re thrilled to have the opportunity to use our business as a force for good. (Stay tuned for what we’ve got planned for next year.)

Inside the Artists’ Studios: Visiting 12 Maker Spaces in 2017