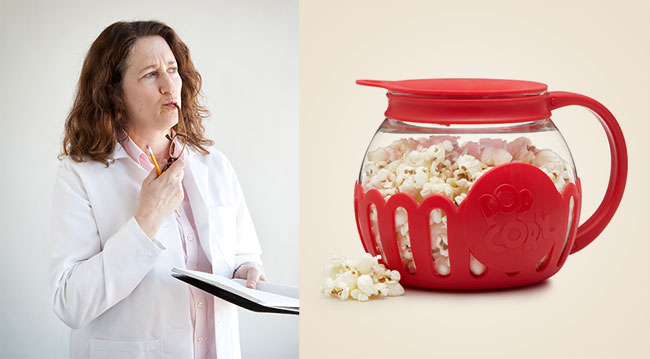 I first became interested in popcorn as a toddler. Microwave popcorn didn’t exist yet, but painted wood toy popcorn did.

My first real adult job entailed working very long hours in an office where the only convenient food was in a vending machine. This led to consumption of bagged microwave popcorn packets accompanied by the creepy smell of chemical “butter.” (According to the U.S. Environmental Protection Agency, conveyed in steam containing nearly four dozen chemicals, including the ink and glue on the bag). Years later, I discovered that microwave popcorn is just… popcorn. Any popcorn can be made in a microwave. I bought a microwave popcorn popper in December, 2006 and have been conducting experiments with it ever since. 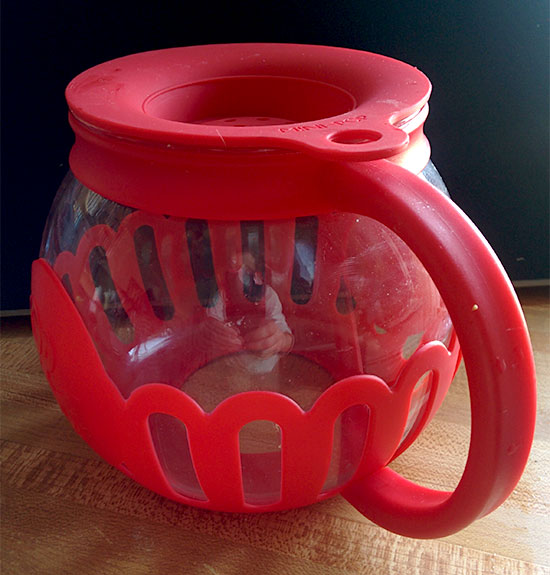 Microwave Popcorn Popper | UncommonGoods
It has a heat-resistant, glass-protective shell with a red, olde-timey popcorn box-style scalloped design. The handle doesn’t get too hot to touch.

However, I’ve become reluctant to use that popper because it’s made entirely of plastic. At high heat, plastic can emit volatile chemicals into food it has contact with. So when I saw that UncommonGoods had begun offering a microwave popcorn popper made of heat-resistant, borosilicate glass (the kind used in lab beakers), I nobly volunteered to test it. 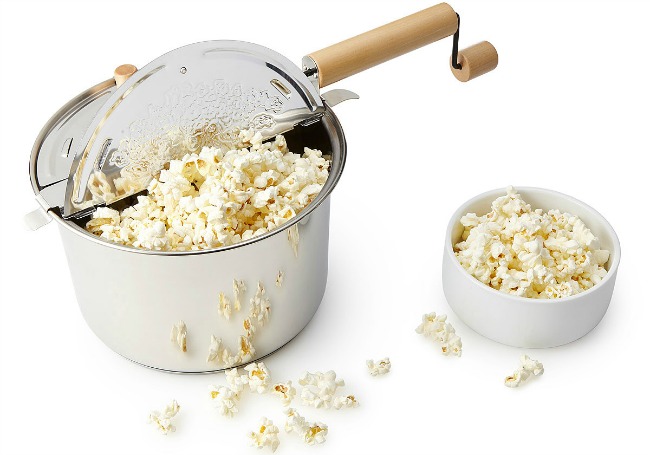 (I admit that a stovetop retro popcorn maker would be aesthetically superior, but those classic popcorn makers require that one pay close attention; a deal breaker for this space cadet.)

Secondly, I have only ever bought ordinary, conventionally grown, yellow or white popcorn kernels. I’m looking forward to testing UncommonGoods’ organic, gourmet popcorn to see if there’s a difference. That the seasonings will be tasty is a given.

I’ll be able to make delicious popcorn in a jiffy (har!) without worrying about cancer-tastic chemicals. I will also increase my fiber consumption by about eleventy billion percent.

I chose to try the savory (as opposed to the sweet) Popcorn Kernel and Seasonings Set. As you can see in the close-up photos, some of the popcorn in the set is beautiful; jewel-like blue and red. In a breach of scientific procedure, I popped all the baby white kernels before photo documentation took place, but they weren’t as striking as the red and blue ones, and anyway, you can see some in the shot of the multi-colored kernels. 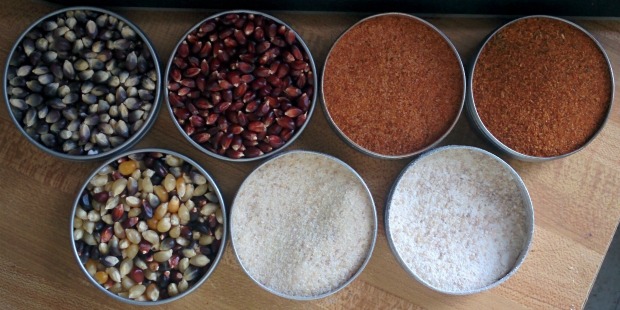 The popcorn and seasonings come in nice little tins that, once emptied, are useful for holding jewelry, little hardware items, and the like. They have a clear top, so you can see what’s inside. Handy! 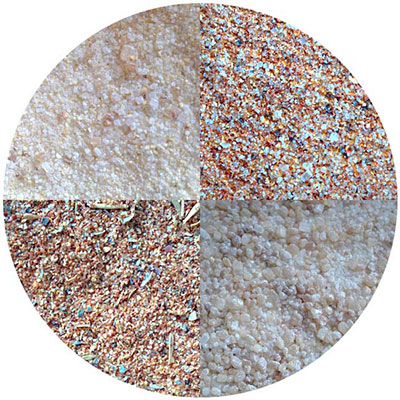 As you can see in the close-up photos of the seasonings, the mixtures include various herbs and spices. They’re a far cry from the brightly-colored candied popcorn preferred by child palates. Despite this set being billed as “savory,” there’s a little sugar in each blend. But it’s just one of several tastes and doesn’t predominate. 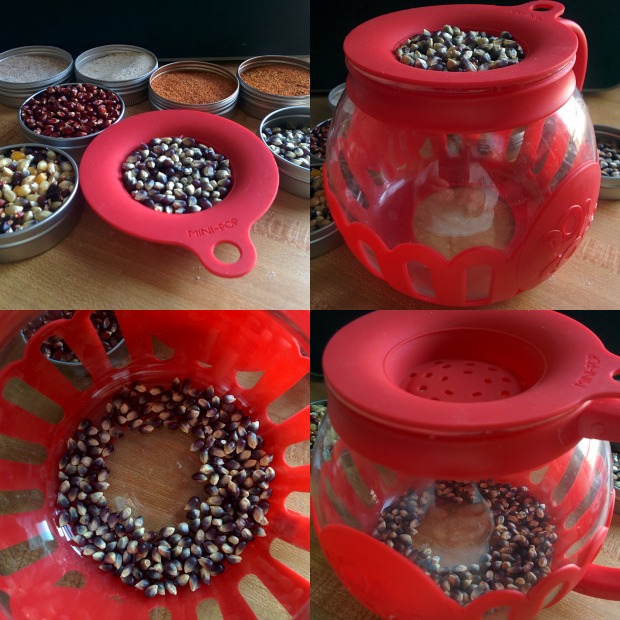 The silicone lid is cleverly designed to both hold the right amount of popcorn kernels for a single batch, and to drip melting butter on the popcorn as it cooks, though the little holes.

The only tricky part is figuring out how high to set your microwave’s power, where any hot spots might be, and when to stop popping. What can happen if you get any of those wrong is that the popcorn starts burning, which gives it a nasty smell and taste. I knew this already from my previous microwave popper, and it’s kind of inevitable that it’ll happen once in a while.

You need to play around a bit with different settings and times to arrive at the goal of Most Kernels Popped Without Burning. (You also need to use relatively fresh popcorn, as old popcorn may no longer have the tiny drop of moisture inside that turns to steam and pops the kernel.) In my compact microwave, I use high power. I set it for 5 minutes, which is always longer than I need, but that way I’m never going to have to re-start it if it stops before enough kernels have popped. 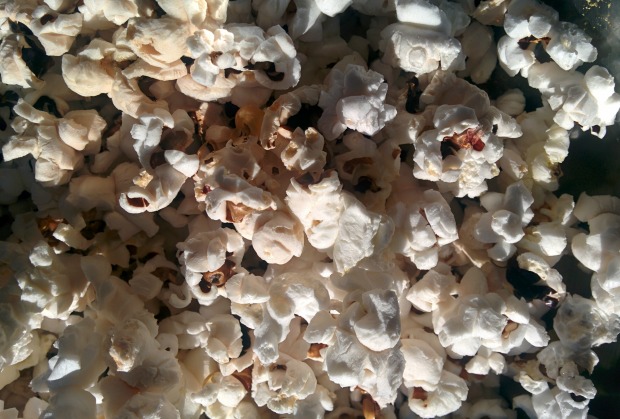 Popping sounds start happening at about 60 to 90 seconds in, then rapidly accelerate. Knowing when to stop comes with experience. Pay attention as the popping slows down. As soon as the interval between pops gets down to about 2 seconds, yank the popper out of the oven. Trust me when I say it’s better to be safe than sorry. You can always re-pop un-popped kernels, but burnt ones can’t be un-burnt. 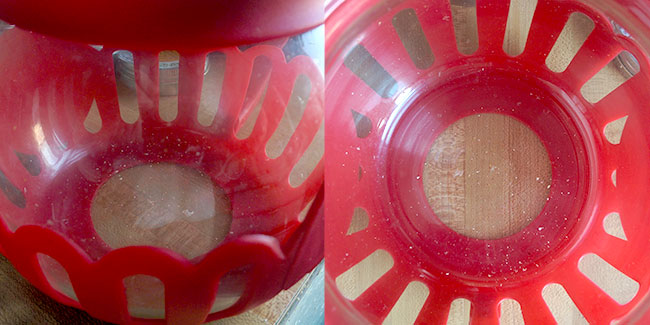 Microwave Popcorn Popper | UncommonGoods
Look how clean! Only a bit of popcorn dust. No grease.

When the popcorn is done, you just pour/shake it from the container into your bowl of choice. (Don’t touch the glass part of the popper until it cools off.) My old, plastic microwave popper became scratched and stained after some use, but that will never happen with my nifty new glass popper, which barely needs cleaning, if you don’t use the butter-while-popping option.

I tried putting butter on the lid while the corn pops a couple of times, and it worked fine, but since my main priority is always not to burn the corn, I decided I preferred eliminating that variable (fat absorbs heat) and add my fat of choice after popping. The photo on the left shows how most of the seasoning drifted to the bottom of the bowl when I didn’t use fat to help it stick to the kernels.

I tried avocado oil, which is healthy but not so interesting. In the right-hand photo is my fat of choice: delicious, slightly nutty-flavored ghee (clarified butter), which I melted in the nuker in under a minute in a little ceramic bowl, after the popcorn was done. I read on the internets that ghee closely resembles the taste of theater popcorn butter, so if that’s what you’re after, give it a try. It’s pretty easy to make your own if you can’t find it locally.

This pretty colored popcorn tastes a lot better than any I’ve made before. It’s kind of nutty. It has character. By comparison, the ordinary popcorn I’ve been using tastes like Styrofoam, which I never noticed before.

As predicted, they were delicious. Ironically, the Spicy Cajun was butt-kickin’ hot, while the Butt-Kickin’ BBQ was only mildly so. The BBQ flavor was similar to my favorite BBQ-flavored potato chips, with just a touch of sugar. I liked blending the Spicy Cajun with the Sweet Onion seasoning, to tone down the heat a bit. I love ginger, so the Sweet Ginger was fantastic when I was craving a grown-up, candy corn-like taste.

This is the best popcorn popper I’ve ever used and the best popcorn I’ve ever made. I’d never used seasonings before, but it would be hard to imagine better ones. I’ve become a popcorn fiend, substituting popcorn when I’m beset by potato chip cravings. Much healthier!

* Popcorn is ancient. “Totopoca” is an Aztec word that means, “The sound of popcorn popping.” (I wonder what the Aztec word for “onomatopoeia” is.)

* The size of the popper is perfect for one person. My old popper made a huge amount and I ended up eating too much. This one makes a satisfying serving, but you won’t be stuffed to the gills.

* The popcorn tins contain enough for 2 or 3 batches; the seasonings last far longer, because a little goes a long way.

* All popcorn is GMO-free. Non-organic popcorn is, however, can be heavily sprayed with pesticides – especially a lot of the big-box, big brand, commercially grown stuff.

Did you hear about the popcorn that joined the army?
They made her a kernel.

Uncommon Knowledge: Where Does Whiskey Get Its Color?