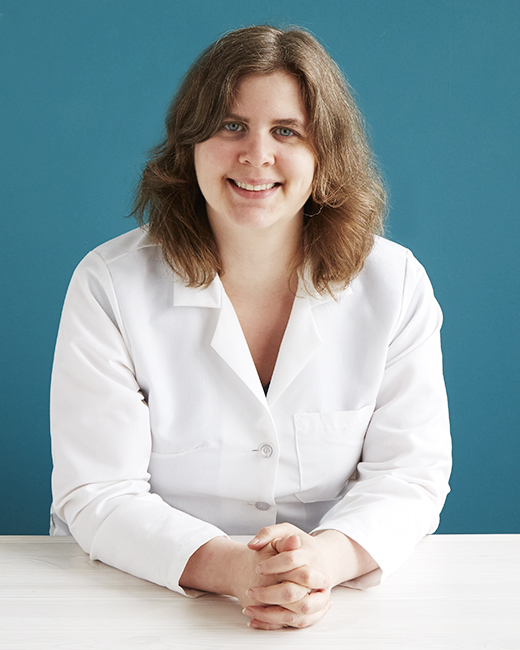 As the Inventory Planner for our Tabletop category, I am usually one of the first to get a sneak peek at the new items being added to our assortment of kitchen and cooking tools. When NéQuana, our tabletop buyer, showed me the Flipside Stovetop Grill, she thankfully noticed when my eyes lit up and offered to let me take it for a spin.
I’m a lifelong New Yorker, which means not only do I not currently have my own outdoor space, I have never had my own outdoor space. I dream of one day having a space to grill outside, but given that that time is still in the future (and that even when it happens, there will still be winters), a grill pan has been on my kitchen wish list for a while. I was particularly drawn to the Flipside Stovetop Grill because it is wide enough to cover two burners, and being able to cook in larger batches is always appealing to me – doing multiple rounds in the same pan is a pain, messy, and the first batch gets cold while subsequent batches are being cooked. When it was pointed out to me that the “Flipside” of the grill pan acts as a griddle, I was sold. It came home with me that very night.

MY LIFE WILL NEVER BE THE SAME.

My boyfriend and I wanted to take the Flipside Stovetop Grill for a maiden voyage that would use both the griddle and the grill. The answer was immediately obvious: brunch! I don’t often make pancakes at home; I generally opt for waffles. Even though I am technically trained to be a pastry chef, I am really terrible at making pancakes at home. I put too much butter in the pan, I pour in too much batter, the pan gets too hot after the first batch, things get ugly, and instead of perfect circles of goodness I end up with butter-drenched tragedy. So I was excited to test out the griddle side of the Flipside Stovetop Grill with some griddlecakes. The results, with minimal effort on my part, were fluffy, sweet, and perfectly browned. And since I was able to cook FIVE at a time, overall time spent at the stove was much reduced. 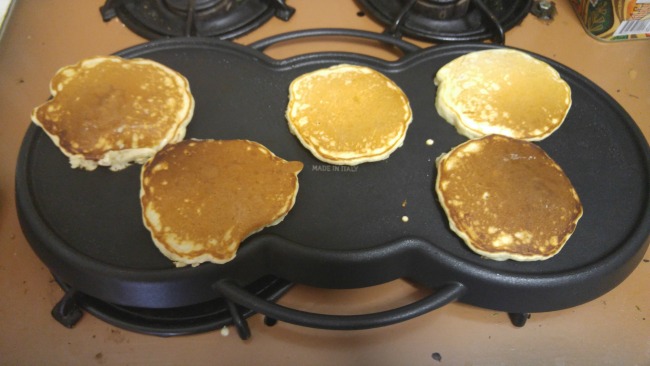 Once the griddlecakes were done, I flipped the pan to the grill side and put the sausages straight on – the pan is non-stick, so there was no griddlecake residue to worry about. (As an aside, my consumption of meat-based sausages is not endorsed by UncommonGoods’ animal-friendly practices, and my omnivorous views are my own. The grill pan would also be great for vegetarian sausages.) While it was somewhat unfortunate to not be able to cook both at the same time, the pan was already heated up when I flipped it over, so the sausages were very quick to heat up. The grill marks looked pretty legit, and while the smoky flavor from cooking over charcoal can’t fully be replicated indoors, those lines of char still added great flavor. 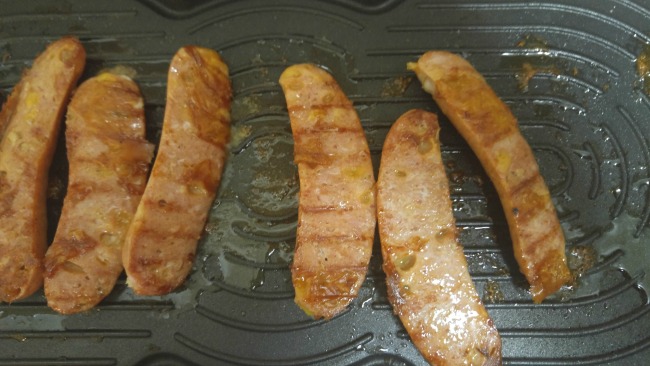 Because the pan spans two burners, it is definitely possible to have an issue with uneven heating, but I tried to get the two flames to roughly the same height and it worked out pretty well, and even the middle section that was not over a flame seemed to cook at roughly the same pace once the whole pan was hot.
We had a delicious brunch and an easy clean-up. I predict that this pan will basically live on my stove from now on. 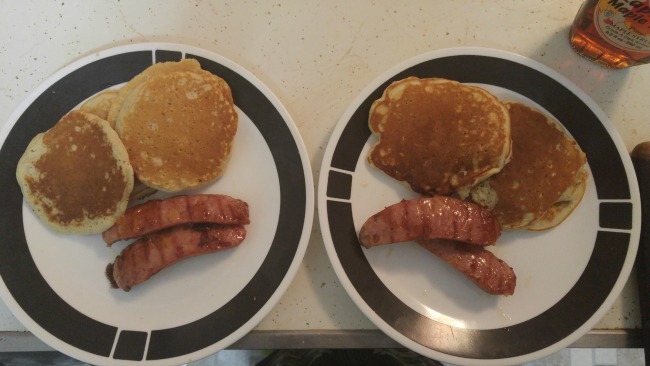 My life will never be the same.