As a certified B Corporation, UncommonGoods is excited about sustainability. That means more to us than just being “green” – we strive to offer products that reflect the environmental and social best-interests of everyone. So, when our makers are as concerned with sustainability as we are, we’re always excited to learn more about their process and the positive impact they’re having on the world.

While many of our makers rely on sustainable practices at one point or another in their process, we’re especially excited about those who place the wider world at the forefront of their craft – those who are making an uncommon impact. That impact doesn’t have to be solely related to the well-being of the planet, and Andrew Kuschner’s company Silk Road Bazaar is a perfect example. A member of the Fair Trade Federation, its mission is to provide jobs and opportunity for social advancement to women in Kyrgyzstan by bringing modern interpretations of traditional Kyrgyz felt handicrafts like the Animal and Foodie Booties to the American marketplace –and it’s making a tangible impact. 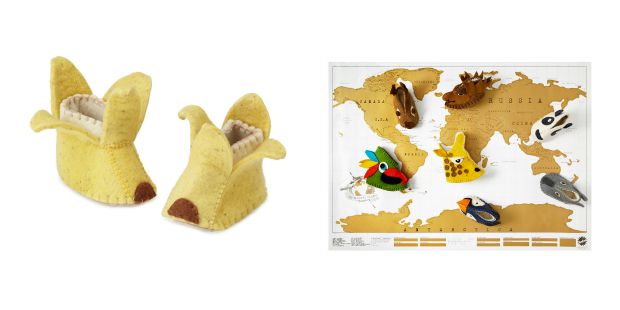 “Economically sustainable practices are important to me because we live in an unfair global society, and I want to do what I can to help change that.” – Andrew Kuschner 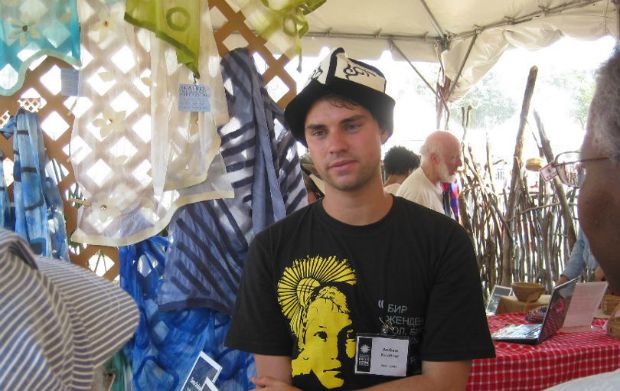 I hesitate to throw the word around, but Andrew’s approach is a truly inspirational model of how international commerce can be conducted responsibly in a world in the midst of tumultuous globalization. Having never given the small, landlocked country in Central Asia too much thought since I crammed for a geography test in eighth grade, I first asked Andrew: why Kyrgyzstan? 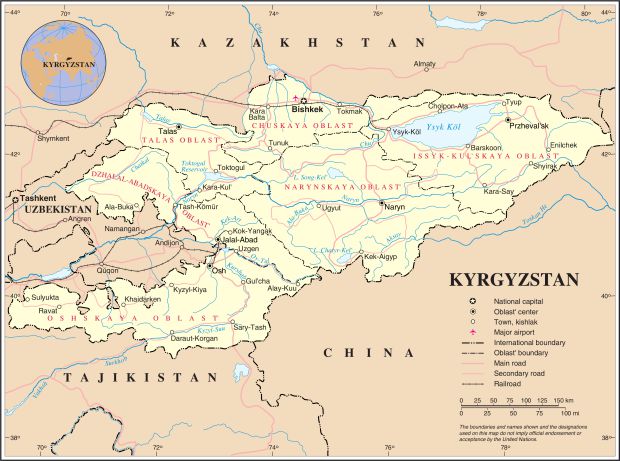 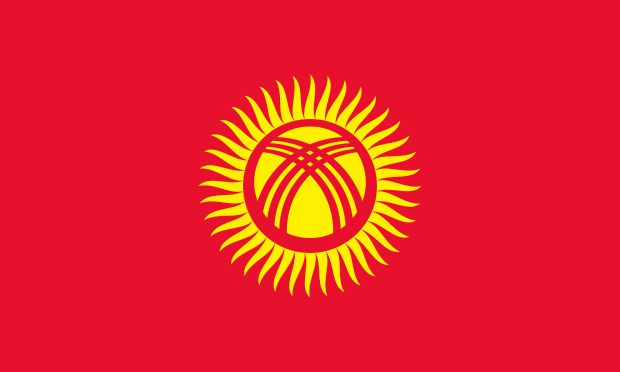 “Silk Road Bazaar is currently one of the only companies to locate production in Kyrgyzstan, so we’re doing that pretty deliberately. Our mission is to improve socioeconomic access for people far away from capital resources and job opportunities. I grew up in the United States where – at a deeply ingrained cultural level – people possess this preconceived notion that if you work hard, you’ll be able to support yourself. But after traveling Asia while I was in the Peace Corps, I saw that that ideal just doesn’t hold up everywhere you go. Sometimes the opportunity just isn’t there.” 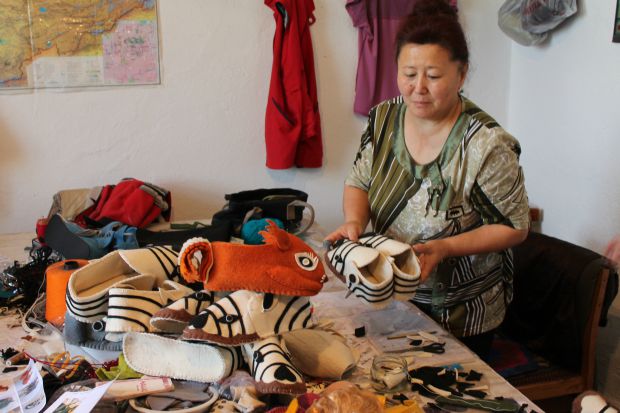 Andrew joined the Peace Corps after college in response to his experience studying in South Korea in 2009. “Just walking down the street there, you can see how materialistic and superficial elements of Western culture have come to dominate everything,” he said. “So I reacted to that and decided to join the Peace Corps. I wanted to experience something more grounded and raw.” 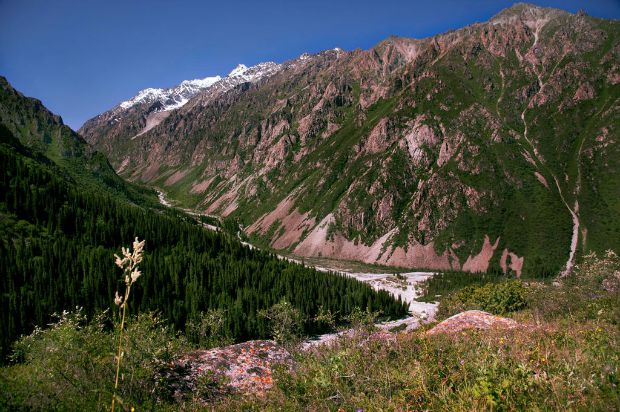 “When I was assigned to Kyrgyzstan, I had little idea of what to expect, but it certainly was raw. If you need to travel in comfort, Kyrgyzstan isn’t the place, but if you’re looking for a rugged adventure, you can’t beat it.” 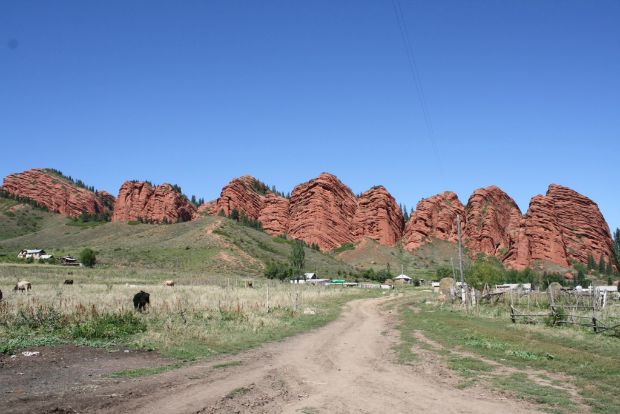 He characterized the country as a hidden gem. “It’s isolated, beautiful, and mountainous, and the people there are inherently curious of outsiders. They’ll just have met you and then invite you into their house for a chat and some tea. It’s a really friendly environment for the most part.” 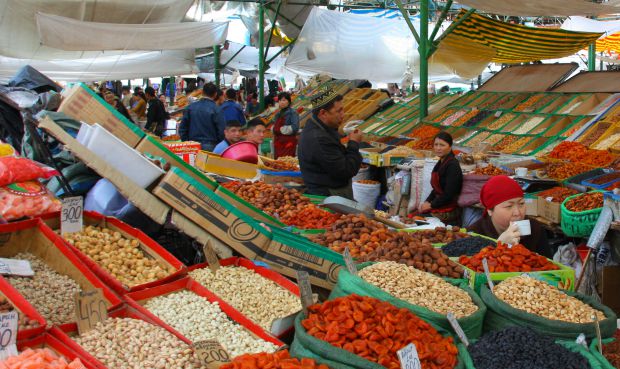 Yet it’s also clear that the country has some deep-seated problems when it comes to gender equality and employment. “Right now, we’re only hiring women – we’ve tried hiring men and it ruins the dynamic of the workplace. Women in Kyrgyzstan are afforded less agency than men, and are discouraged from working. A lot of the women in our collective are widowed or face extreme financial difficulties, and by providing them a stable work opportunity we’re hoping to help more women become more autonomous.”

“It was crazy – when I first got to Kyrgyzstan, I was right there with the first four women making the product with them, and they’d tell me things like: ‘This is the first job I’ve ever had that didn’t require me to bribe the supervisor, or let him withhold my first paycheck.’ It’s as much about dignity for these women as anything else, and it’s been great working closely with them.” 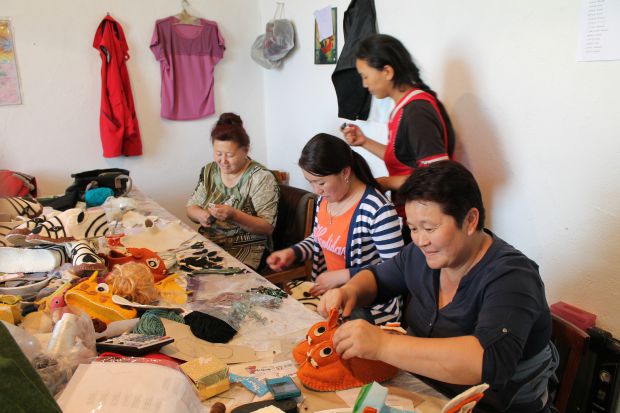 “If you don’t care deeply about the people you’re helping, then you can’t do this kind of work.”

But creating employment for women is just one dimension of Silk Road’s mission. It’s also generating new interest in the revival of traditional Kyrgyz craftsmanship in a country that has lost much of it’s local identity – due in part the events of the past century and in part to pressures of globalization.

In 1991 when the Soviet Union fell and Kyrgyzstan became an independent country, most of the country’s talented artists fled to larger and more creative cities in Europe and Asia. However, specially trained artist Gulnara Kydyrmyshova – now Andrew’s partner at Silk Road – stayed behind and established a small retail store called Kork, where she sold traditional felted handicrafts and taught free sewing classes to unemployed women.

“Felt has always been an important material in Kyrgyz dress and art. Sheep outnumber humans 3 to 1 there! And so by backing up felt handicrafts with stable jobs and access to American markets, we’re hoping to revive and preserve this part of Kyrgyz culture.” 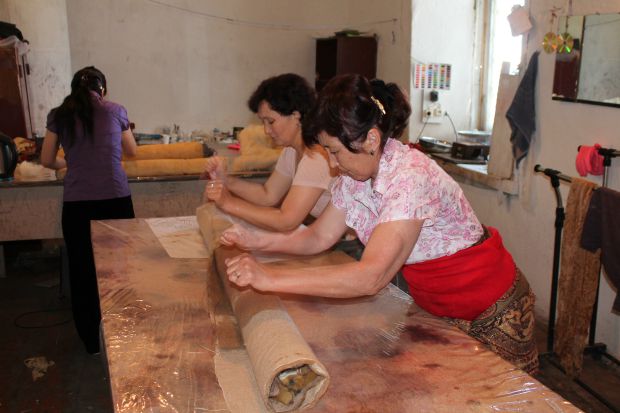 Silk Road also ensures that it’s booties leave a minimal environmental footprint: “It’s worth pointing out that shearing a sheep isn’t like slaughtering a cow for meat. Felt is a sustainable, recyclable material, and the sheep are not harmed – they can actually overheat if they aren’t shorn.” 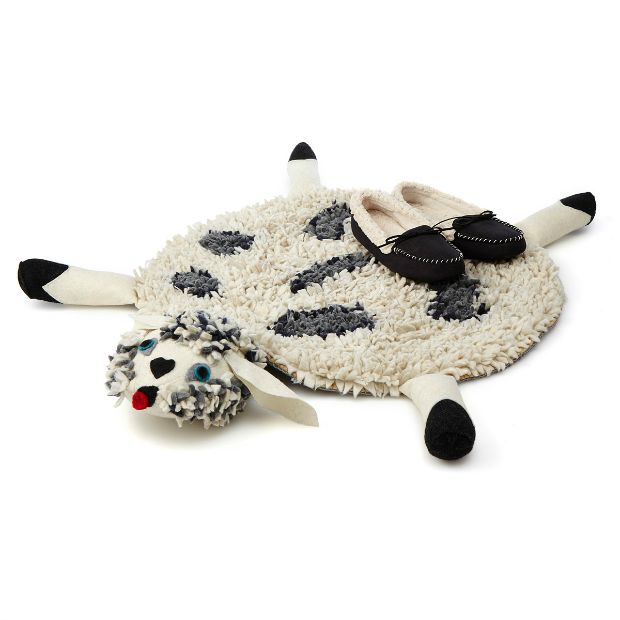 Speaking of sheep… Silk Road has recently expanded their products at UncommmonGoods to include two new rugs with tremendous personality – Sinclair the Sheep and Nelson the Turtle.

The idea for the booties Silk Road Bazaar sells through UncommonGoods was actually inspired by traditional Kyrgyz felt booties that women commonly sew for their children. Andrew explained: “I would be walking around the market and see every baby with these nice embroidered red booties, so I brought some to a craft show in the US. I met [former Senior Buyer] Melissa from UncommonGoods there; she loved them and so we started working on a line of Animal Booties. Now we do Foodie Booties too.” 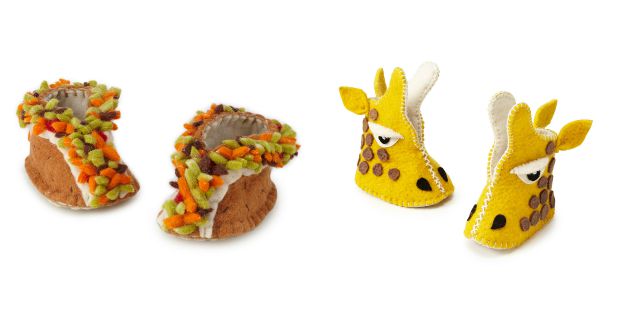 “We’ve been very thankful to have UncommonGoods as a long-term, sustainable partner. Companies like it don’t really exist. We need stable partnerships to build on our goals, and UncommonGoods is that to a T. Nobody here is making giant salaries, and I think UG understands that with the way it’s been so flexible. We’ve been able to expand from employing 4 women to employing 30-40 women working on the booties alone, and we couldn’t have done that without this partnership.” 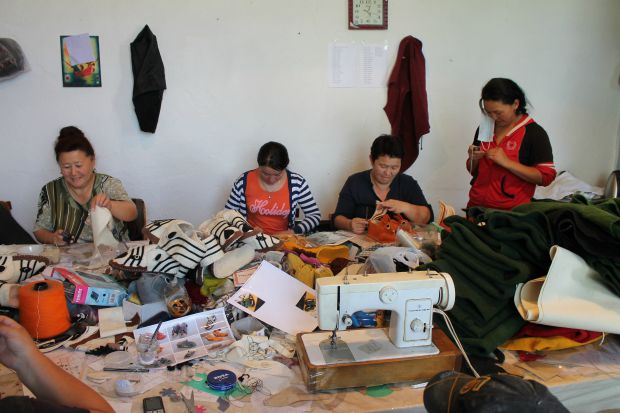 How to Tell Your Story Through Social Media