Simplistic as it may be, I firmly believe in Isak Dinesen’s philosophy that “the cure for anything is salt water – sweat, tears, or the sea.”  I am happiest when soaking up vitamin D near any body of water. Growing up in south Florida triggered my deep love for the ocean and my fascination with marine life. Though I’ve grown to appreciate all landscapes, there’s no environment that I find more restorative than a pristine beach.

I was inevitably captivated by Swimming III, Holly Hansen’s winning Art Design Challenge entry. I was not surprised to learn that the young artist grew up around Cape Cod. Her ability to effortlessly reflect the layers of the ocean from dawn to dusk suggests that she shares a similar affinity for the sea shore. This piece made me feel instantly nostalgic for the days where I’ve freely floated in the ocean like a mermaid, trusting the waves to flow my body along the beach until my sun-kissed skin turned pruney at sunset. It’s because of this nostalgia that I admire the reason behind Holly’s decision to use a monotype method for this piece: its spontaneity allowed her to “let go of a lot of control” and gain more flexibility. This piece is an experiment that worked…swimmingly! At it’s core, it’s such a refreshing example of the dynamic energy within this beloved landscape. Read on to meet Art Design Challenge Winner Holly Hansen, and learn about her artistic influences, her go-to inspiration triggers, and her uncanny knack for spotting four-leaf clovers. 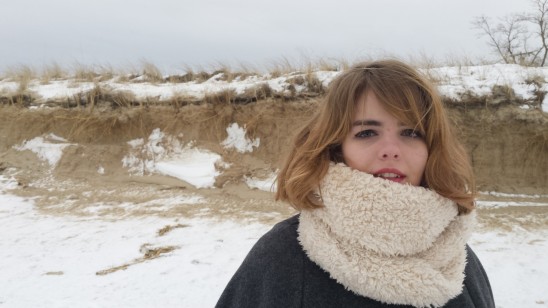 How did you come up with the concept of your winning piece?
Swimming III is the final piece of a triptych. With this series, I focused on creating mood and atmosphere in my landscapes in ways I hadn’t attempted before. Previously, I worked primarily in etching, but for this series I chose monotype for its spontaneity. I was able to work with landscape in a refreshing and flexible way. With such a responsive medium, I could let go of a lot of control. The series was an experiment, but it sent me off in the right direction.

Can you tell us 3 fun, random facts about yourself?
1. I am THE BEST at finding four leaf clovers. I will take any challengers, especially since people have given up on looking with me.

2. Most of us are familiar with synesthesia, that scene in Ratatouille where Remy sees dancing colors when he eats something delicious. I have visual motion-to-sound synesthesia. It’s like having sound effects to everything I can see, that only I can hear. Almost like a cartoon.

What different techniques do you use when creating your art?
I am very attracted to mark making. A large portion of creating an image is finding the most exciting pairs of marks to sit next to each other. I use several different tools to create marks. I push myself the most when I’m drawing. I try many techniques to push myself out of my comfort zone. At one point I was standing above my desk with a .005mm Micron pen taped to my longest brush, drawing on a 22” x 40” piece of printmaking paper. Whether it’s flying through drawing after drawing, or having four pieces of Bristol taped to the desk and one palette of gouache, nothing was said in one articulate statement. It feels more like pulling adjectives out of no where and throwing in nouns you had no idea mattered to you in a stuttering, clumsy, and heartfelt argument. After all that’s said and done, I have the right momentum to approach my primary piece at that time. 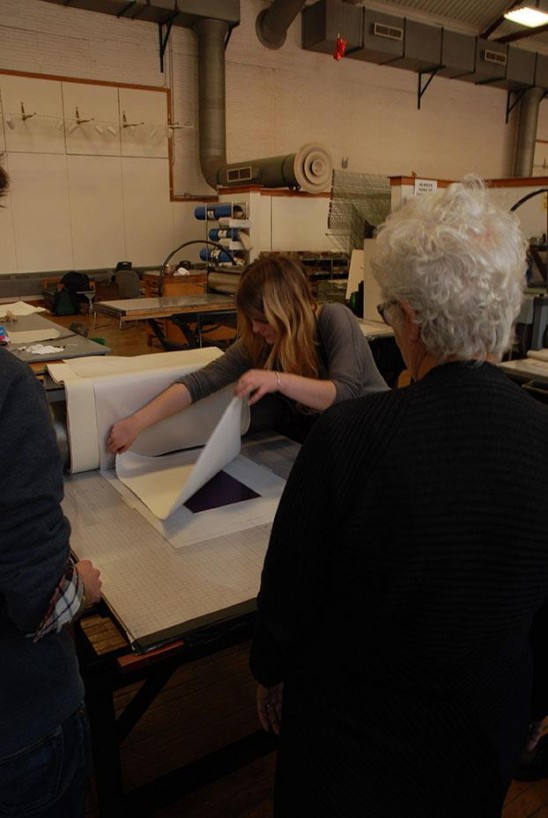 Describe your workspace.
I made Swimming III while I was still in school, and could utilize their extensive print shop 24/7. Now I’m just working at my desk at home or out in observation. I don’t have access to a print studio, but things are much more spontaneous and open minded. I’m in a phase where I’m less focused on creating finished images as finding new things that interest me. I went through a phase where I was picking up whatever fabric I had left on the ground near my desk and scanning it. It’s just a baby seal plush and some fake furs pressed against glass, but I’m having so much fun.

Who or what are your influences?
Anyone who is really pushing themselves to make something they haven’t done before. In that way, I studied the way artists progressed over time, specifically focusing on Sally Mann and Andrew Wyeth. You could do the same with with Miley Cyrus or Taylor Swift. I love seeing the determination and passion in those who seek growth. 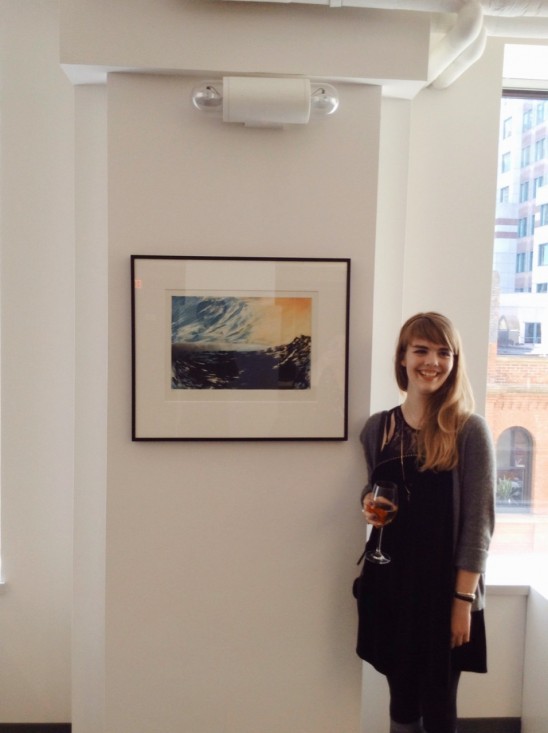 Can you walk us through the step by step process of creating Swimming III?
Swimming III was specifically a search for different ways to use a large roller to create an image in monotype. Instead of using a small roller to cover the plexi, or a large roller in one big sweep, I challenged myself. I found the biggest roller I could physically hold. Doubling back and layering with the roller unintentionally led to the four distinct segments of the piece. The series involved several experiments with a large roller, each piece having multiple layers of monotype, drypoint on plexi, and hand-drawing. 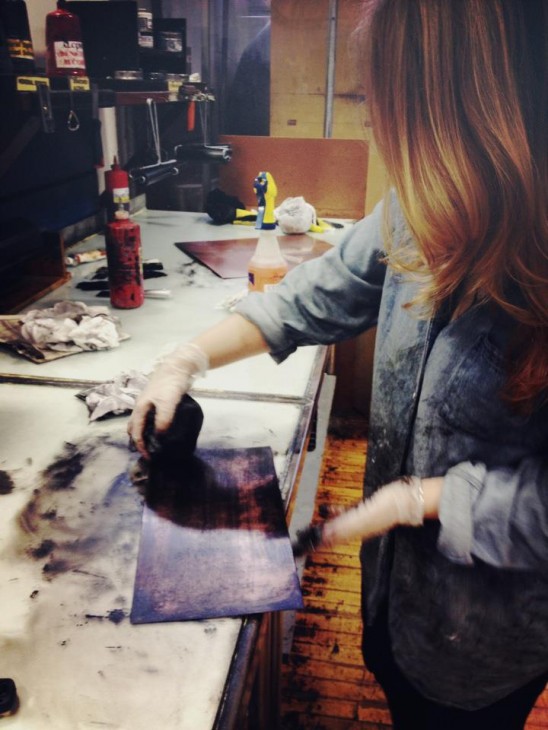 What’s your favorite feedback that someone has said about something you created?
A gallery owner who had never seen my work began one of my school final reviews with: “I had no idea there were young artists interested in landscape. I mean landscape? It’s refreshing to see someone try and make their own voice in something so well established.” That was the first time somebody had recognized my intentions. It’s hard to gain respect working in landscape, but I see it as a challenge to create your own voice in a popular genre. 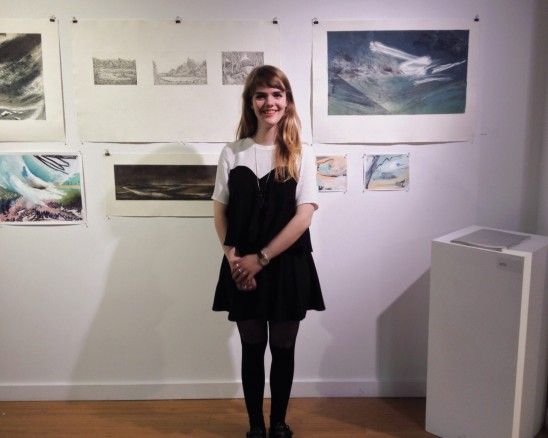 What are your hobbies outside of art?
I love cooking. You’re learning a skill through experience, just like making art, except you get to eat it. And if you mess up? There’s no one to disappoint but some taste buds. It can be very meditative, focused, or carefree. Whatever you need to do to end your insane day and please your stomach. And I love to take care of my plants and succulents.

Creative people all have those days (or weeks!) when we feel lost, unmotivated, or stuck. How do you keep yourself inspired when you’re in a rut?
I hang everything I’ve been working on around the studio and look. Then I go to an artist’s supply store and look. If that doesn’t work, I leave the city, go back to the Cape, and look. 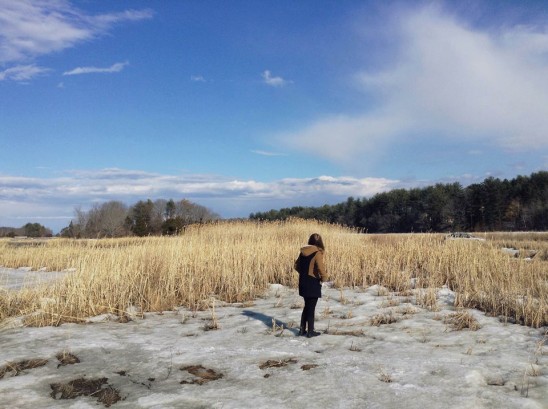 Uncommon Knowledge: Does a rose on any other planet smell as sweet?