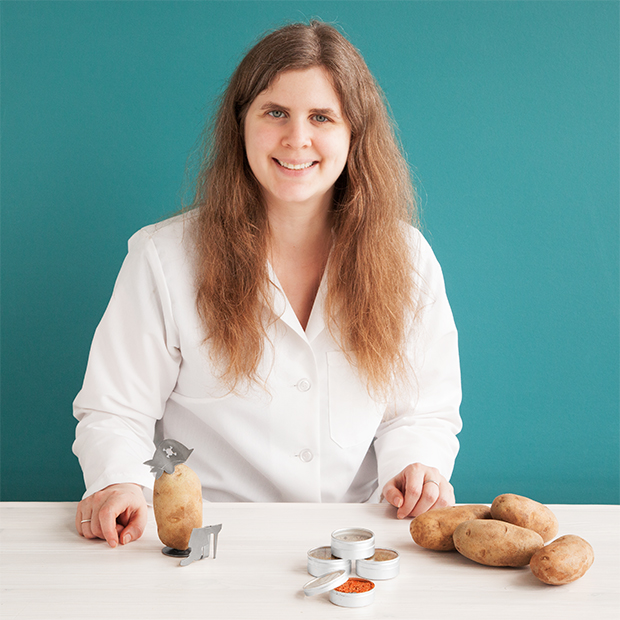 Research:
There is nothing more ubiquitous than the potato when it comes to filling the role of “starch” on a U.S. dinner plate. In fact, the average American eats over 140 pounds of potatoes per year! And yet, despite a centuries-old national love affair with potatoes, our most popular side dish often gets a bad rap, because so many of our 140+ pounds each come to us fried in oil, coated in preservatives, and slathered in fatty or sugary condiments. But it doesn’t have to be this way! When eaten with a more simple preparation (and with the skins left on!) potatoes are a great source of Vitamins C and B6, Potassium, Fiber, and Iron, and the complex carbohydrates are great for keeping your energy up.

I am a firm believer that food is at its most truly delicious when it is prepared simply and healthfully, so when I saw Julie Pederson’s Potato Seasoning Set I was immediately excited to take it for a test ride. Julie Pederson is wonderful at creating food and drink kits to help you explore new flavors and combinations, from herbal tea to baking salts. Since there are over 4,000 varieties of potatoes grown, and the kit has 12 different seasoning mixes, there are seemingly endless ways to play, create, and EAT! Who could resist?

Since I was already going to be playing with potatoes, I also wanted to try out our Potato People, a super fun set of potato nails that use the natural heat conducting power of metal to help potatoes cook faster on the grill or in the oven, and look hilarious while they are doing it. 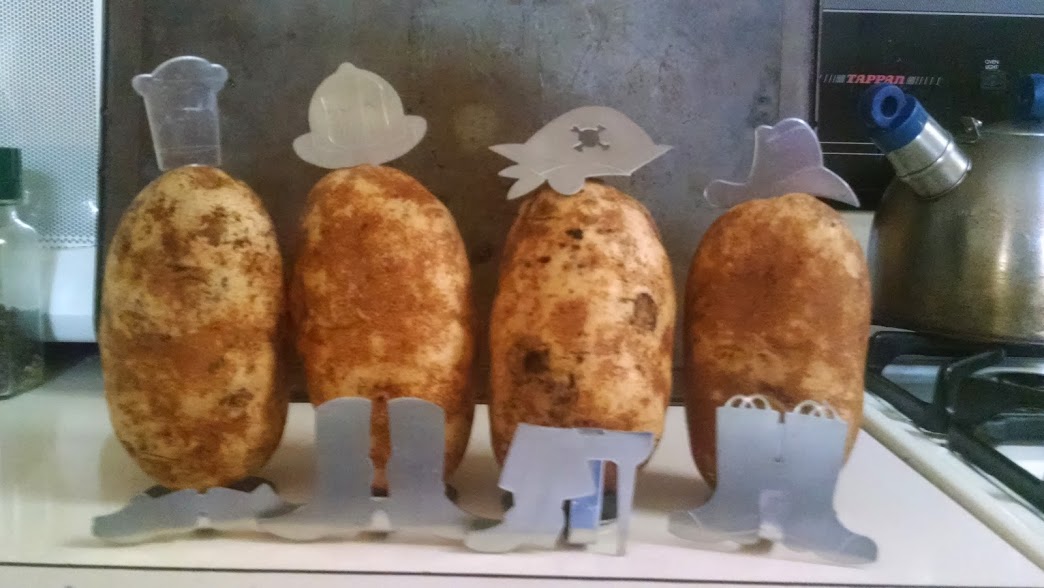 Hypothesis:
We will be able to use the Potato Seasoning Set, along with a few of the thousands of potato varieties available, to create four distinct and delicious potato dishes that will each be hailed a gastronomic triumph by our dinner guests. The Potato People will help us cook the potatoes more quickly and thus prevent us from over-indulging on pre-dinner cocktails before we get food in our stomachs.

Experiment:
On the warmest day of the year so far, my boyfriend Paco and I were joined by our friends Joel and Kendra for the Great Potato Experiment. It was perfect grilling weather, but not so hot that the prospect of eating several pounds of potatoes was unappealing. So far, so good!

The seasoning kit comes with 12 different mixes, and the maker includes suggestions for how to use each one. We decided to try four different ones for this round (so there are many more potato parties in our future). Piri Piri Grilled Potatoes
We had to make at least one type of baked or grilled potatoes so we could give the Potato People their first outing. Setting up our four huge russet potatoes with the provided chef, pirate, cowboy and fireman hats and shoes was immediately hysterical – the pirate is definitely my favorite. Once they were on the grill, it was slightly macabre to watch the flames lick their shoes as they stood stoic, but it did tickle our (maybe slightly sadistic) senses of humor. It still took about 40 minutes for them to cook through, but they were big potatoes and it probably would have taken twice that long without the metal conduction power of the Potato People. The resulting potato wedges had a great texture, and weren’t too crumbly to be eaten as a finger food. 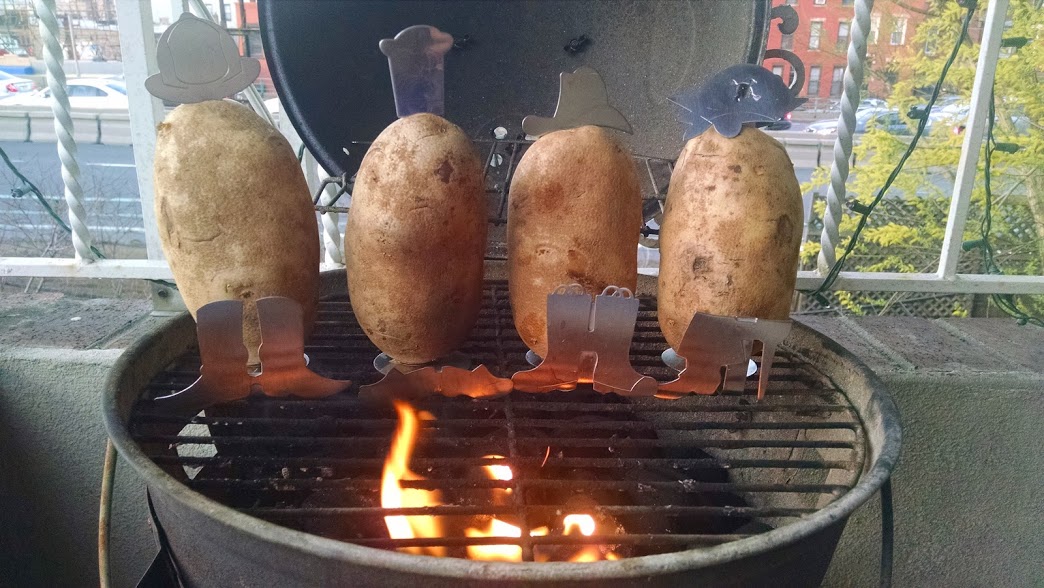 I sprinkled the Piri piri seasoning, which the set describes as “hot, savory and completely addictive” on the finished potato wedges, but I also decided to use it to make aioli as a condiment to give us a bigger opportunity to experience the flavor. Making aioli (which is essentially the same thing as mayonnaise) at home is really easy and only requires egg yolk, lemon juice, and olive oil (plus a lot of patience). Adding the spicy Piri piri blend to a decadent homemade aioli definitely proved the “completely addictive” claim true – we made short work of it. 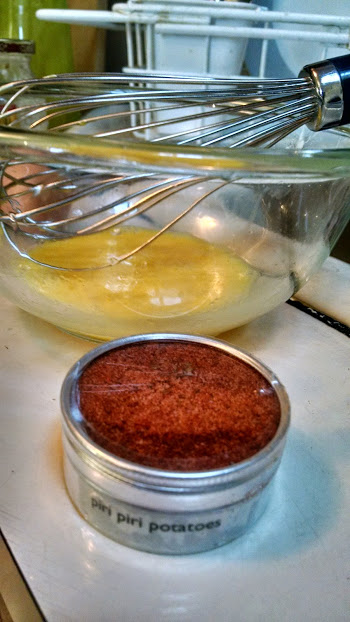 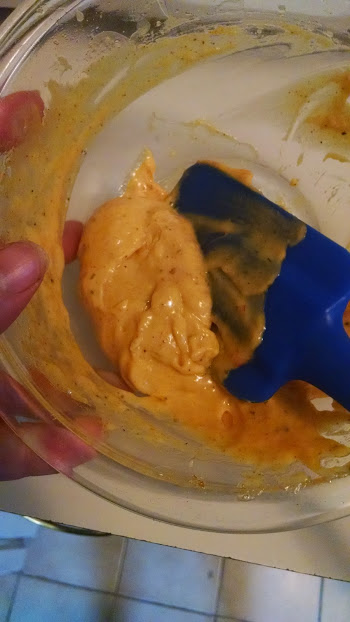 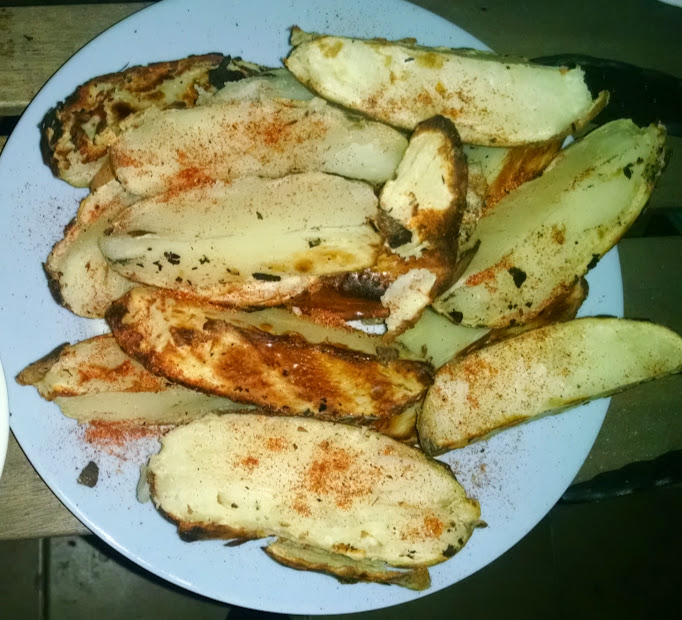 Chimichurri Roasted Potatoes
Chimichurri is a South American blend of parsley and a variety of herbs and spices, traditionally blended with olive oil and vinegar and served with grilled meat. It is delicious, and packs a punch while not overwhelming you with heat, which makes it pretty hard to stop eating it once you start. This was the simplest preparation of the evening: I just tossed the seasoning with some chopped up assorted fingerling potatoes and olive oil and popped it in the oven for an hour. The result was the popular favorite among the four potato dishes – simplicity wins again! 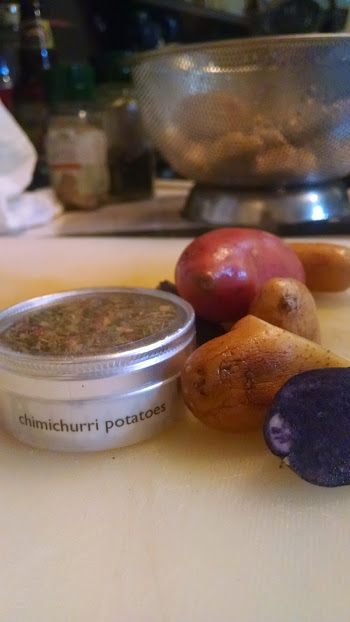 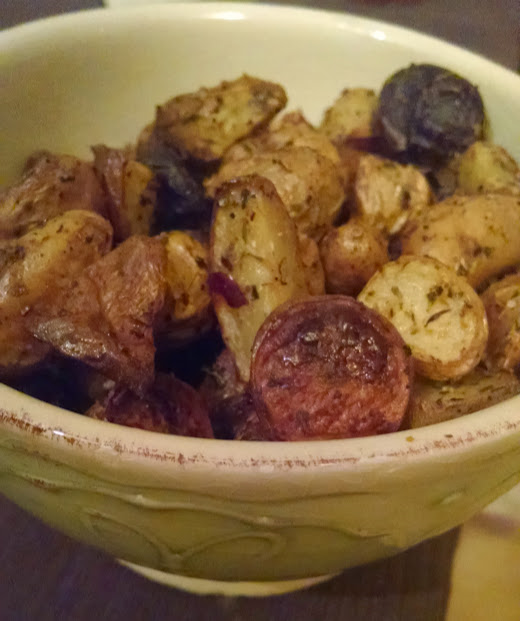 Sesame Sweet Potatoes
The kit recommends combining this seasoning with sesame oil, tamari and fresh ginger. I used soy sauce rather than tamari, but otherwise followed the suggestions. These were probably my favorite, and overall were the pick for second favorite. Sweet potato preparations tend to emphasize the sweetness – cinnamon, brown sugar, the dreaded mini marshmallow coating – but I have always loved sweet potatoes with savory toppings. The flavor combinations worked so well for this dish, with the underlying sweetness doing a great job balancing the umami flavors from the seasonings. And it smelled amazing! 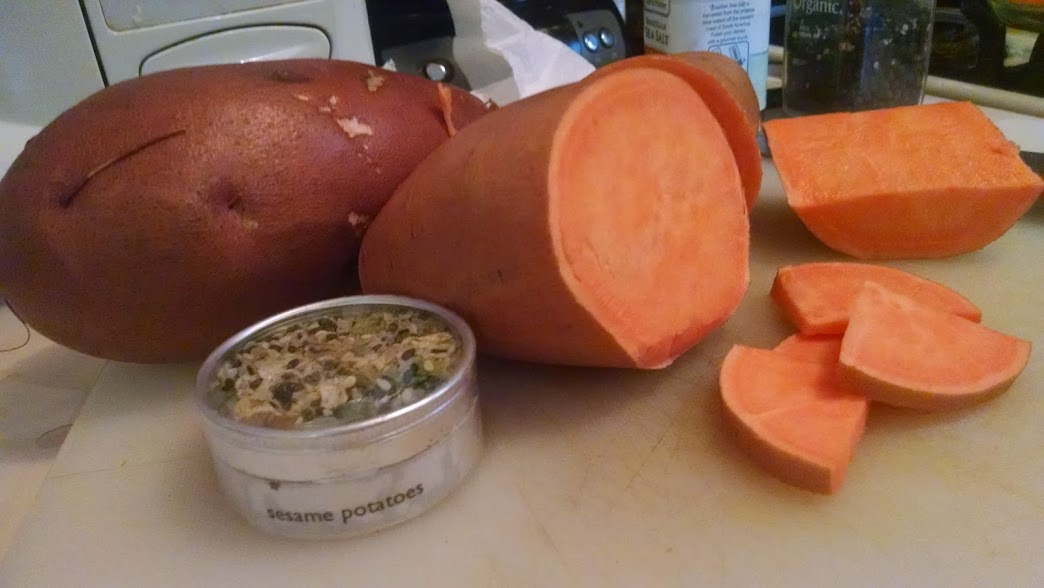 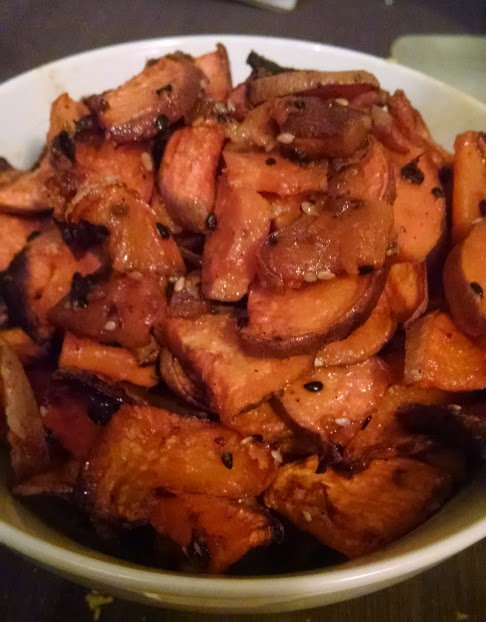 Five Pepper Mashed Potatoes
Who doesn’t love mashed potatoes? I usually make mine by cooking several cloves of fresh garlic in butter and then adding milk and simmering before pouring the whole thing over red skinned potatoes. I chose to forgo the garlic this time around so we could taste the pepper mix, but otherwise followed my usual protocol. These were probably the most addictive mashed potatoes I’ve ever eaten. The pepper added a perfect bite to the cool smoothness of the potatoes and dairy, and the mix was refined and complex. My one word of caution for using this mix is that it does contain a lot of salt, and in my overzealousness to make the mashed potatoes extra peppery, I may have added more salt than was ideal. Remember what I forgot: you can (and should) always taste and add more seasoning if needed right at the end, before you serve. 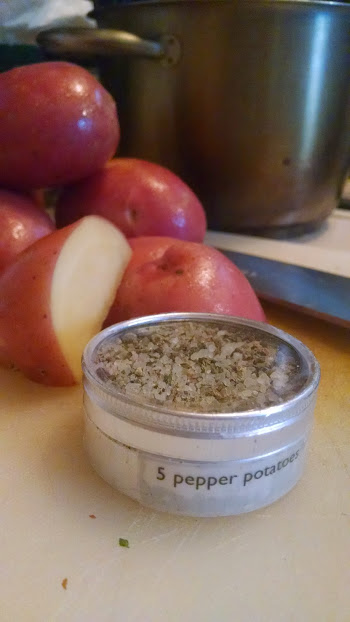 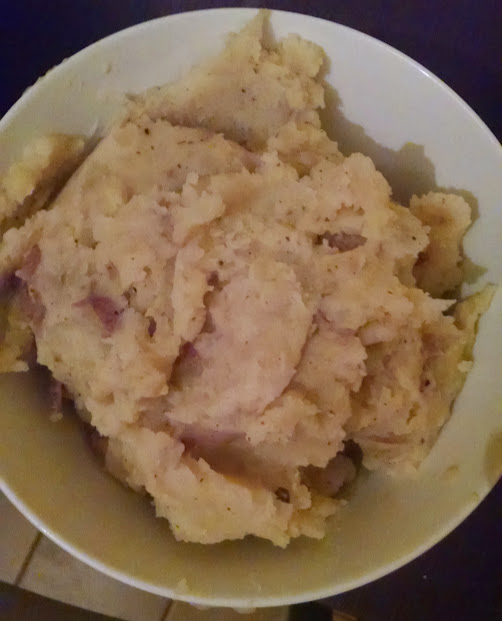 Conclusion:
All four potato dishes were a success, and trying out the different seasonings made for a super fun evening! The best part is that we have more seasoning left of the four we used, plus eight more we haven’t even tried yet. Whether you want to impress at a dinner party or just make Monday night dinner a bit more interesting, this set is a great way to try something new without needing to go shopping for a lot of exotic ingredients – everything you need that isn’t in this set is probably already in your kitchen! 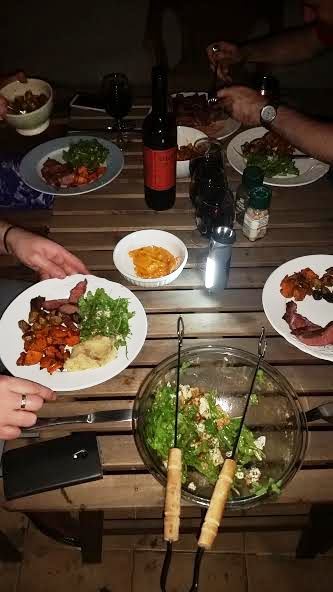 How do you choose products for your catalog?