Gift Lab: How To Produce a Peppery Pickle 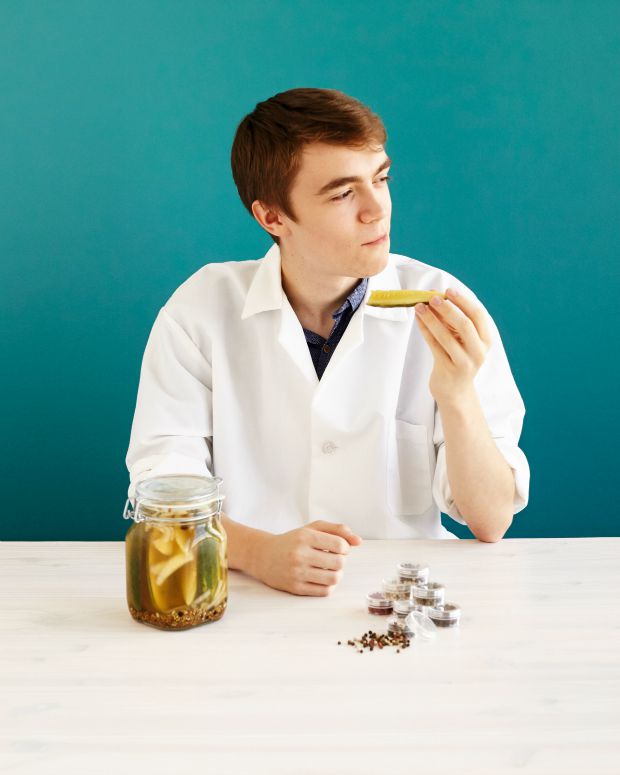 Research:
I’d like to speak about something really important to me and millions of other Americans like me: my personal relationship with the dill pickle. Consider this a Pickle Monologue. 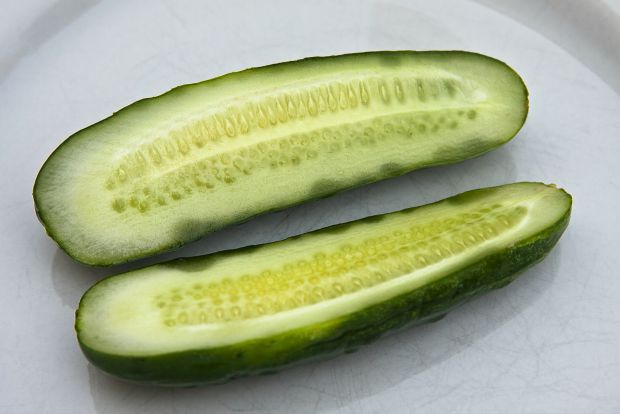 The first batch of pickles I ever made was bittersweet –and I’m not talking bread & butter: those are nasty. No, I’m talking about a metaphorical kind of flavor, one that you can’t actually taste over the vinegary brine, fresh dill, or zesty peppercorns, but is nonetheless real. It was the summer before I would be moving to Brooklyn for my last year of high school, and I made pickles late into the night for a pickle-party where I would be parting with several friends. The secret ingredient that made the brine so good? Tears.

No – I really decided to make pickles as a selfish and misinformed act of appropriation. I had this idea that Brooklyn was full of bearded men making sun tea (see below), and I wanted to make sure I would fit into place. 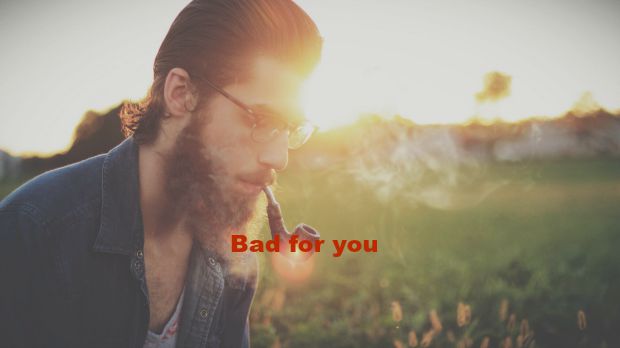 Needless to say, pickles didn’t actually contribute to me finding any affinity with new people after the move – but it wasn’t a total loss. Now I know how to make pickles! And they’re excellent.

Pickles can be quick and easy to make, and they’re one of the few foods that I believe truly tastes better when I make it myself. Plus, pickles you buy at the supermarket are left to ferment in large, outdoor vats with no roofs, leaving them open to insects and bird droppings – so you don’t want to go down that road when you’re pining for a pickle.

Hypothesis:
Two years after that first batch, I’m a full-time student and a lazy person and I’ve fallen off my pickle game a bit – not enough to lose my title, but I need a bit of a refresher. Browsing pickle-related products, I found the Pickling Jar Set, which includes an easy-to-follow recipe and an awesome-smelling supply of dill pickle seasoning – a perfect way to reignite my pickling career. 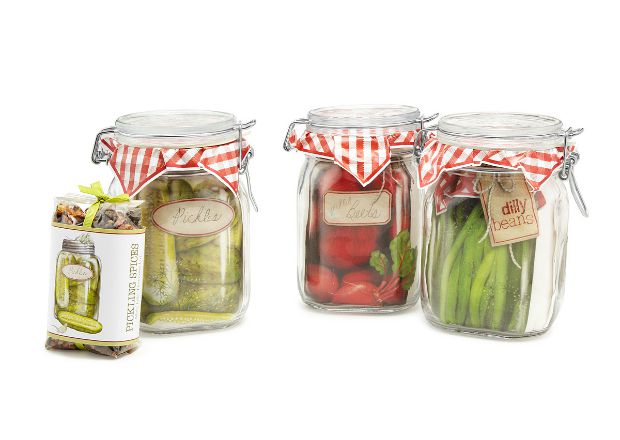 But what’s the point of DIYing if you don’t add an element of customization? I like my pickles spicy, so I’m hoping for some added heat. One way to achieve this is to put hot peppers in with the cucumbers, but that’s a little too spicy for now. I want more of a fresh, crisp summer taste, so I decided to go with the Global Peppercorn Sampler and try out a few different kinds of peppery heat. I predict an easy pickle with the perfect amount of spice. 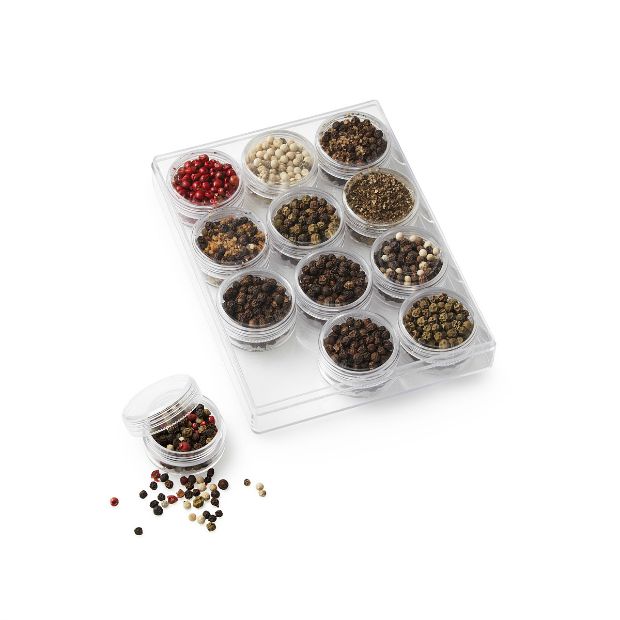 It should be noted that there are two ways to make pickles – a ‘hot brine’ method and a ‘cold brine’ or refrigerator method. The hot method involves fermentation (most pickles you buy in the store are probably prepared this way) and is a lot more involved. Plus, it takes a few months, and nobody has time for that.

The cold method is quicker and easier, and – in my opinion – makes the pickle crispier and better-tasting. The jars aren’t boiled, so they don’t seal the same way and don’t have time to ferment – but they taste fresher. For reference, those extra good Claussen deli pickles are made this way. The recipe in the Pickle Jar Set is a cold brine, refrigerator recipe, so we’re good to go! 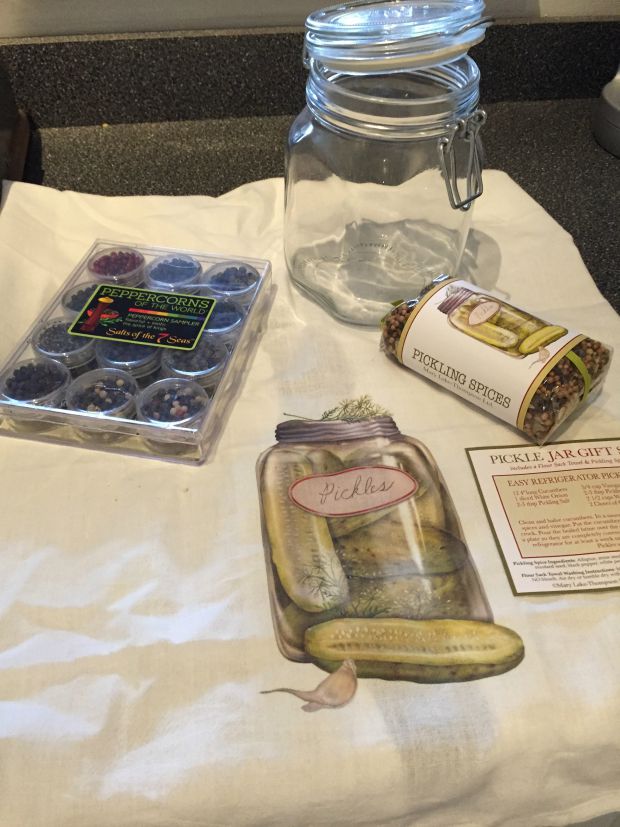 Materials:
Time to gather up the cucumbers and pickling paraphernalia. The measurements below will make enough to fill the large quart jar included in the Pickling Jar Set – but I made a larger batch with some extra jars. Using them for extra pickles ensures that my dad isn’t being pretentious and using them as tumblers.

Here’s the recipe included in the set:

1 sliced White Onion – but you won’t use this much onion, more like half

I also used the peppercorns from the Global Peppercorn Sampler, of course!

A note on pickling salt: Pickling salt is a finely ground salt that isn’t treated with anti-caking chemical. IT’S IMPORTANT THAT YOU DON’T USE TREATED SALT! The pure, fine grind ensures that the brine doesn’t get gross, cloudy, or clumpy – or grow botulism. That said, it’s hard to find pickling salt – I couldn’t this time.

You can use kosher salt as a substitute, since it isn’t treated with anything. However, since the grain size will be different than finer pickling salt, you’ll want to measure differently. The University of Wisconsin – Cooperative Extension recommends that 1 1/2 cups of flaked kosher salt equals about 1 cup of canning and pickling salt – so 50% more kosher salt, which still puts you in a good place with 3 tbsp.

The jar and towel from the set

The recipe takes about a week to pickle, so don’t try to make it the night before your pickle party – because you can’t!

First, I gathered all of my ingredients and arranged them in a photogenic way. This arrangement is EXTREMELY IMPORTANT. The more scenic the arrangement, the more flavors you will “unlock” for a better pickle. 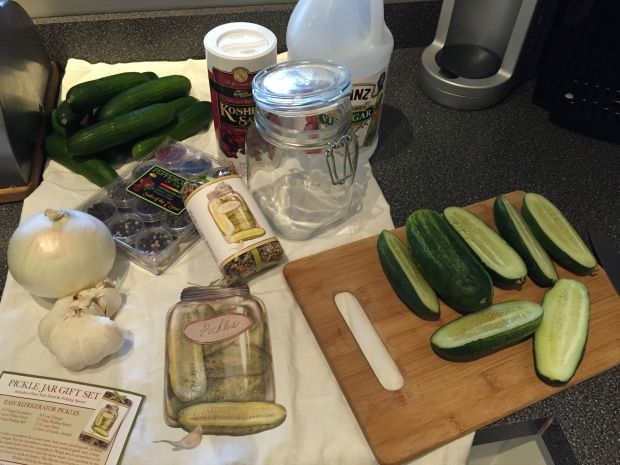 I’m a firm believer in doing one thing at a time, especially when I’m “cooking.” You could probably get away with setting the brine to boil while you prep the vegetables, but not me. Cut off the stems and slice the cucumbers into quarters vertically – and be careful of the pointy end. 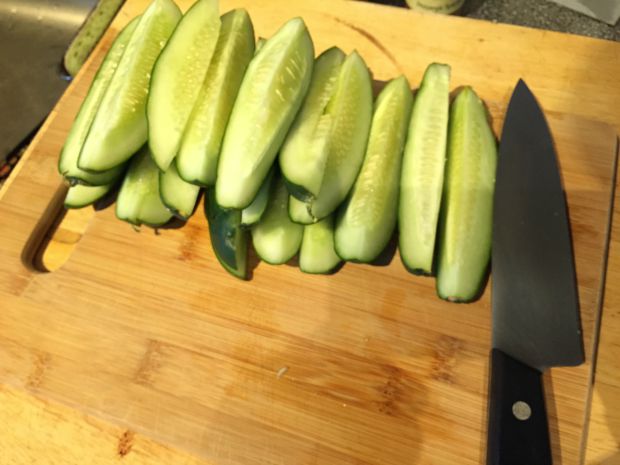 Slice some onion into thin, short pieces, and crush the garlic cloves with the side of your knife. 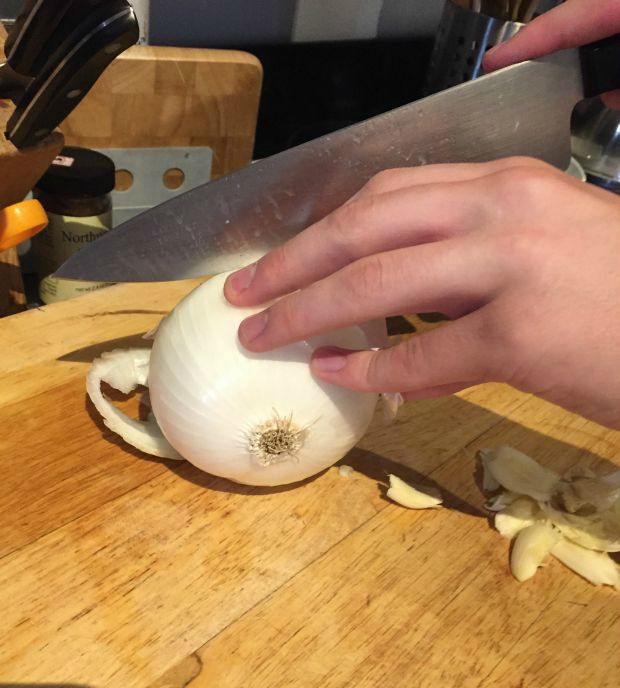 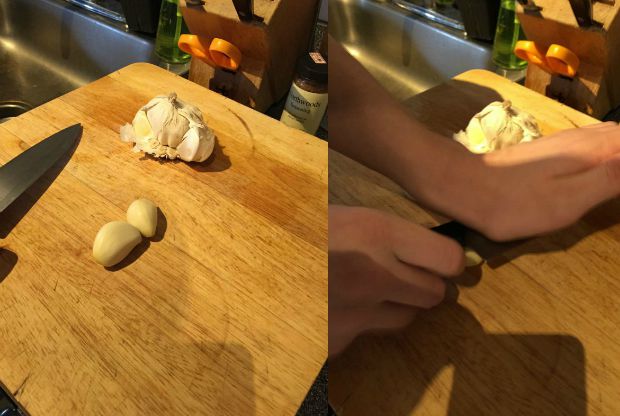 Next, stuff the jars with the cucumbers, onions, and garlic. It’s helpful to put the jar on its side and stack layers of cucumbers, filling extra space with onions and spacing out the garlic. It’s OK if it’s pretty tight in there, but you’ll want to leave a little bit of wiggle room – pack it until it’s tight, but make sure you can easily fit one finger in the center. 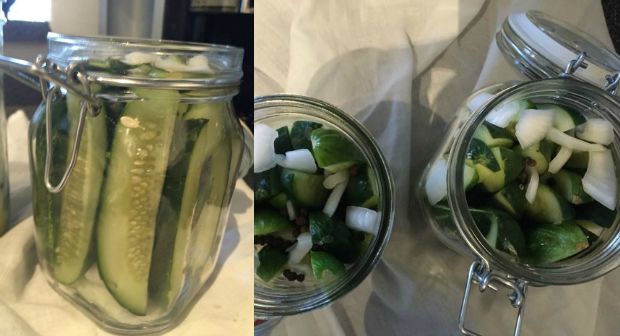 With the jars packed, pick a few kinds of peppercorn and sprinkle generously into the prepped jars. 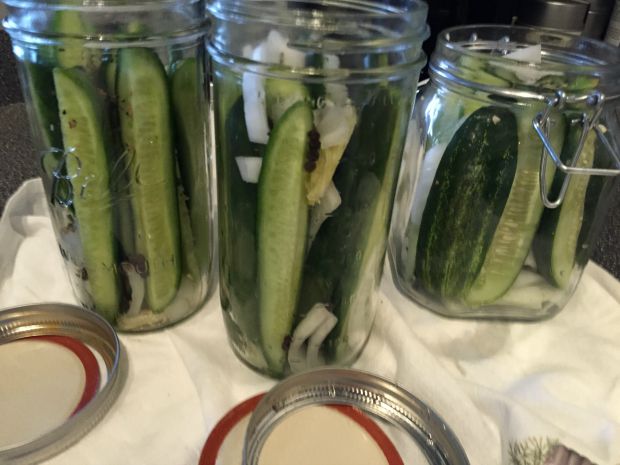 Now it’s time to move over to the stove. Combine the vinegar, water, pickling (or kosher) salt, and pickling spices in the saucepan, and give it a stir. 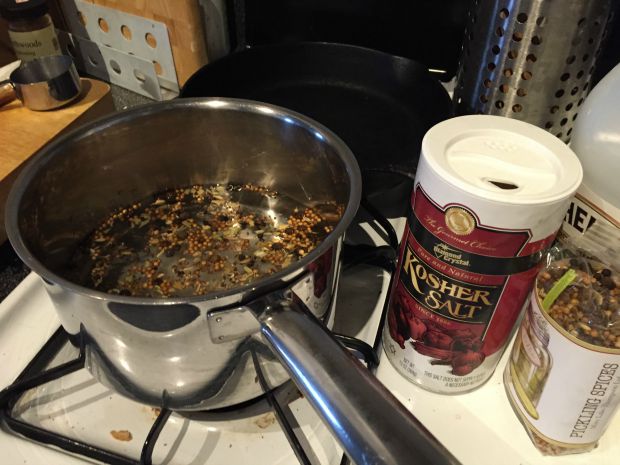 I like to think of recipes as guidelines and add portions of things off of how I feel at the time. I added a little extra salt and vinegar – I like the savory, salty taste.

I started adding a ton of extra stuff at this point. You can pickle anything. The cat is optional, but I find that the lean muscle balances the peppercorn well. 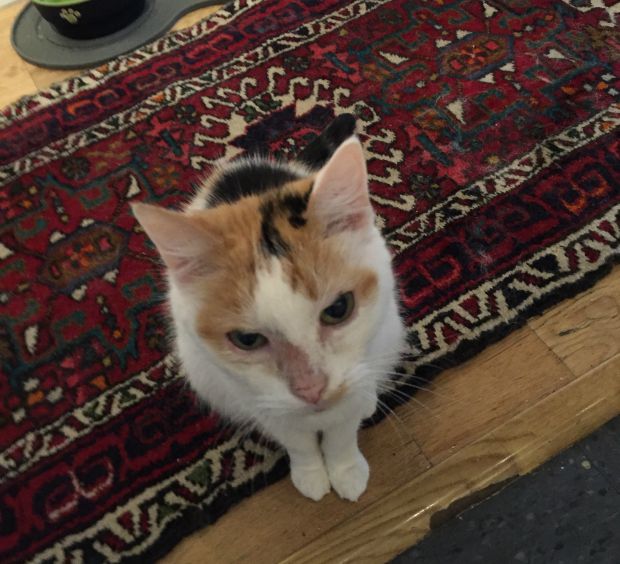 Once everything is in the pan, set it to a boil. I know I promised a “cold” method, but you’ll still want to boil the brine – the hot method involves boiling the actual pickles. 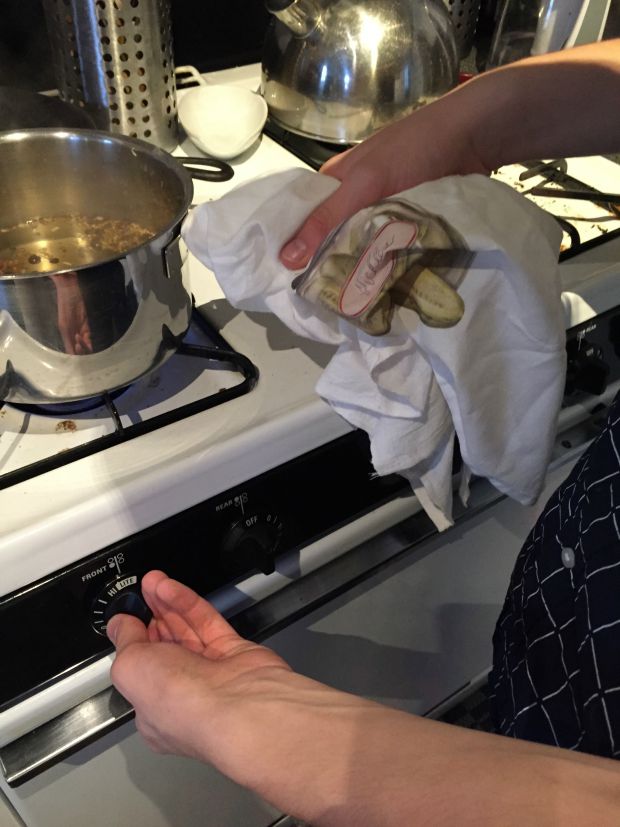 While it’s getting to a boil, set the jars in a line – preferably in the sink. Once the brine comes to a boil, immediately take it from the stove and pour the hot brine over the cucumbers into each of the jars, filling them to the brim. 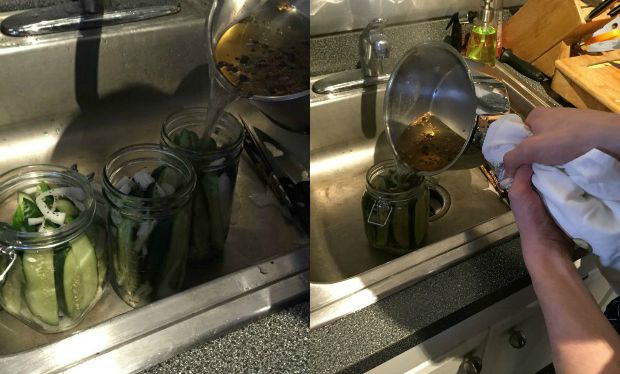 It’s not an issue if there’s some space when you seal the jars – you’re not fermenting them. Just make sure that they’re as full as they can be, or else the ends will stick out of the brine, and you’ll only have 7/8ths of a pickle. 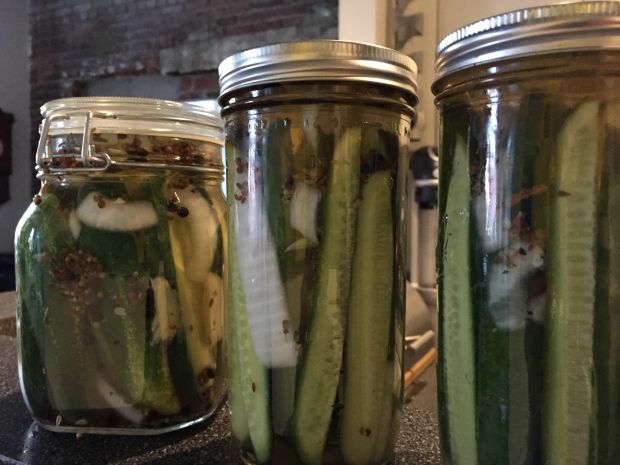 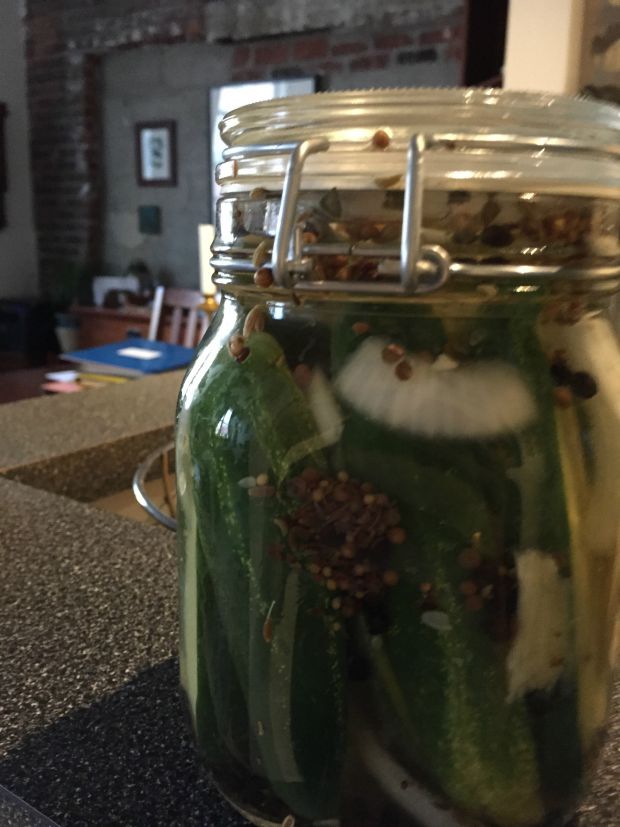 Make sure the jars are closed tightly and stick them in the fridge. Pickle magic now ensues and your ordinary cucumbers become something special. BUT, you have to stand in front of the refrigerator every night at midnight and chant “I’m a gherkin yes I am!” thrice or else the ritual won’t work. 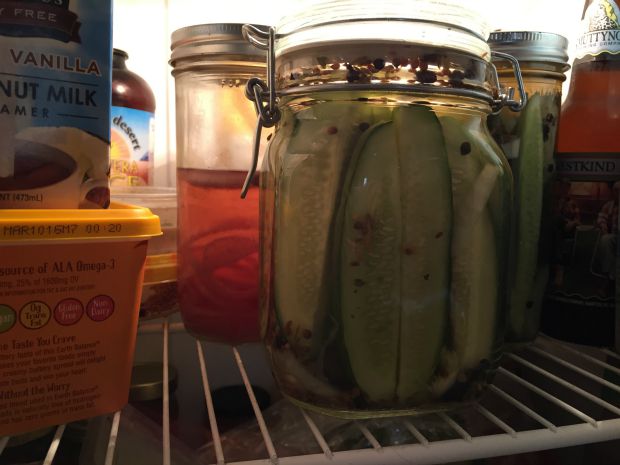 After at least a week, crack open the jar and enjoy! 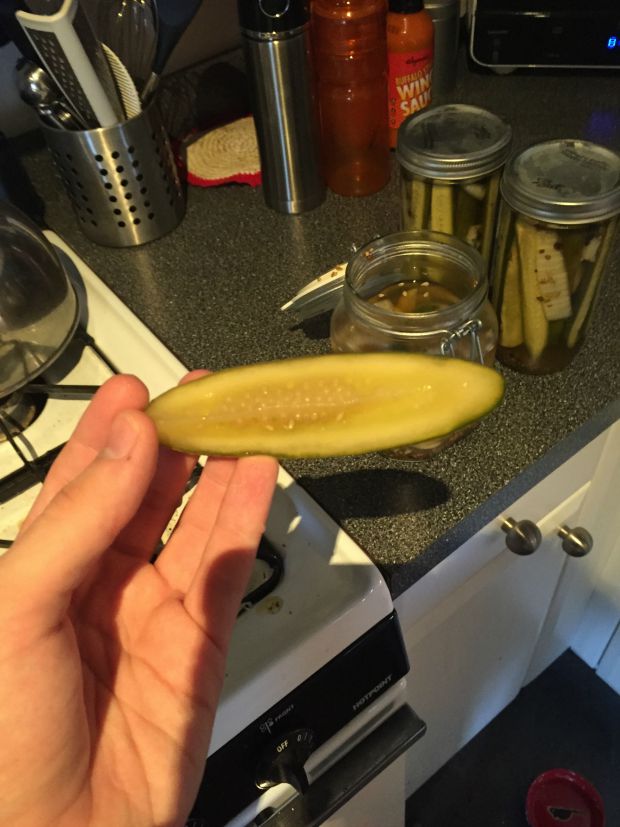 The final product was pretty great! The pickling seasoning included in the kit tasted great – supplemented by the added zest of the peppercorns – and the pickles were very crisp. In the past I’ve only used fresh dill, but the dill in the seasoning tasted really good.

But most of all, the recipe was extremely easy and quick to make! The kit is a great way to start pickling, and the peppercorn set adds a nice element of customization. I can’t wait to try some of the other varieties!

Now that I’m “in the pickles” so to speak, I can live easy. No cats were harmed in the making of these pickles.