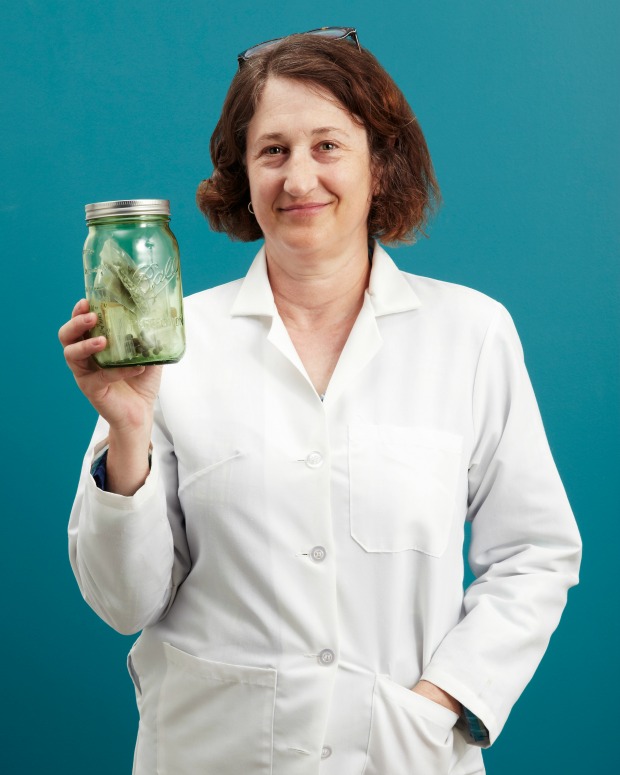 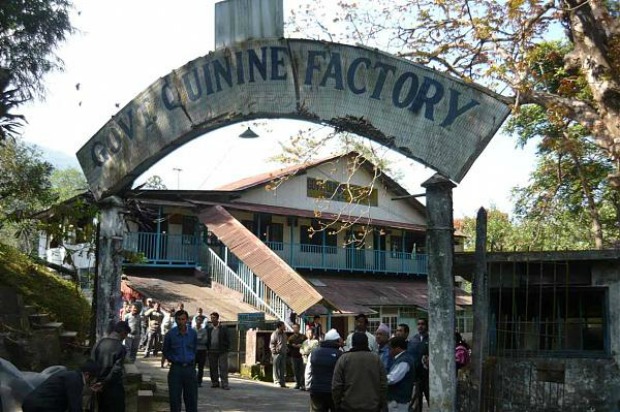 Research:
Full-blown summer has arrived. In Cocktail Land, the hotter the weather, the lighter and crisper people want their drinks. Which brings us to the gin and tonic.

Tonic water’s bitter flavor derives from quinine, a chemical in the bark of certain species of Cinchona trees native to the Andes mountains of Peru. Quinine’s association with gin – a British booze – came about when India was part of the British Empire. 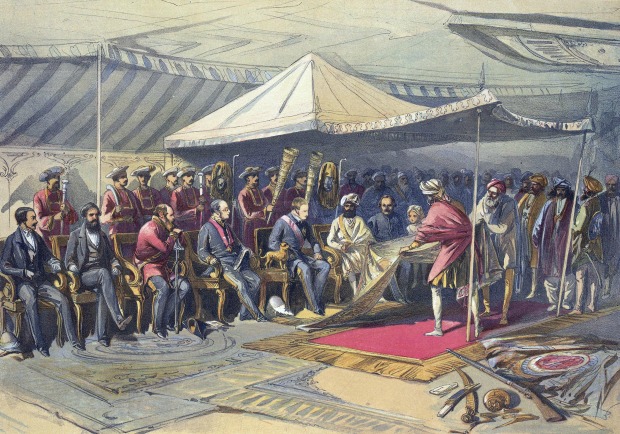 “Return visit of the Viceroy to the Maharaja of Cashmere,” March 9, 1860. Chromolithograph by William Simpson, Plate 30 of ‘India: Ancient and Modern’ | via The British Library

In the tropical areas of India, locals and their British overlords alike frequently perished from malaria, the deadly, mosquito-borne illness endemic in sultry climates. Half a world and another European empire away, Jesuit missionaries learned from the Quechua people of Peru and Bolivia that quinine can both prevent and treat it. That knowledge was transferred to Continental Europe and eventually made use of by the British. They began cultivating Cinchona trees in India and Sri Lanka to help them stay healthy enough to properly oppress their subjects. 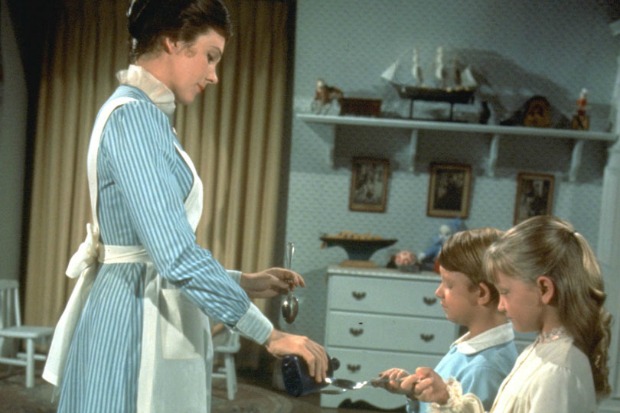 These children are not drinking gin.

Quinine really is bitter. It’s not something you’d want to drink as is. As the British fictional nanny Mary Poppins taught the world, “A spoonful of sugar helps the medicine go down.” Gin helps everything in life go down, so when both were added to the dose, health and happiness went hand in hand. For the British, at least. 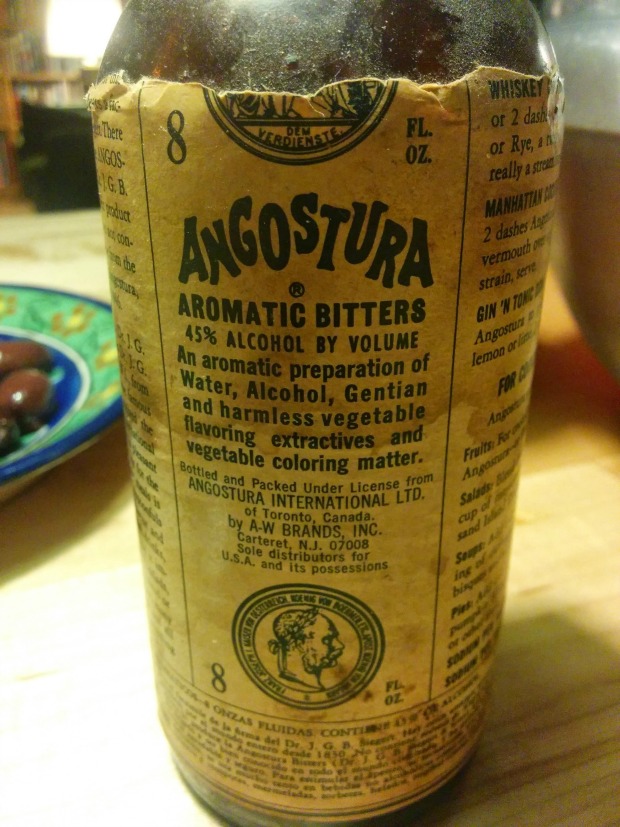 Hypothesis:
I love a bitter kick in my cocktails: bitters, Campari, amaro, whatever. Supermarket tonic water is made with corn syrup (and probably synthetic quinine) and doesn’t have the complex flavors I crave. I’ve used diet tonic water, which is even worse. There are new, improved tonic waters on the market now, but they’re very expensive.

The dose of quinine in the tonic I’m making isn’t going to be high enough to affect malarial parasites, so it won’t contribute to my physical health. However, I predict that the flavor, particularly when combined with gin, will contribute to my happiness – and that of anyone else lucky enough to taste it. 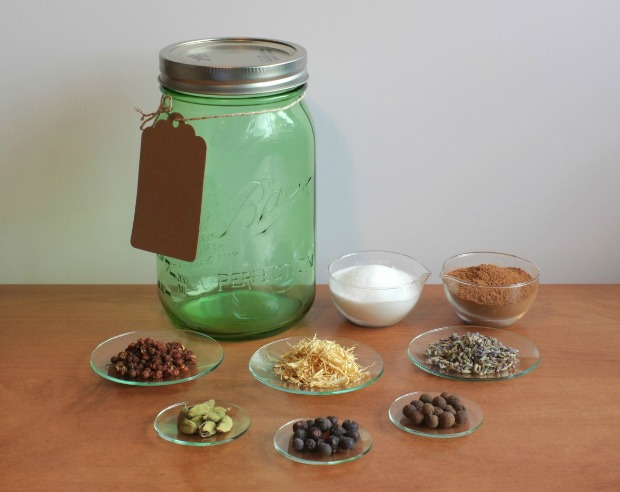 For cocktails:
Gin and/or vodka
Bitters (optional)
Anything else you want

IMPORTANT NOTE: It takes several days to make. It’s not very labor-intensive, but ingredients need to sit and let their flavors work their blendy magic over time. So: Don’t try to make this the night before a cocktail party. Because you can’t. 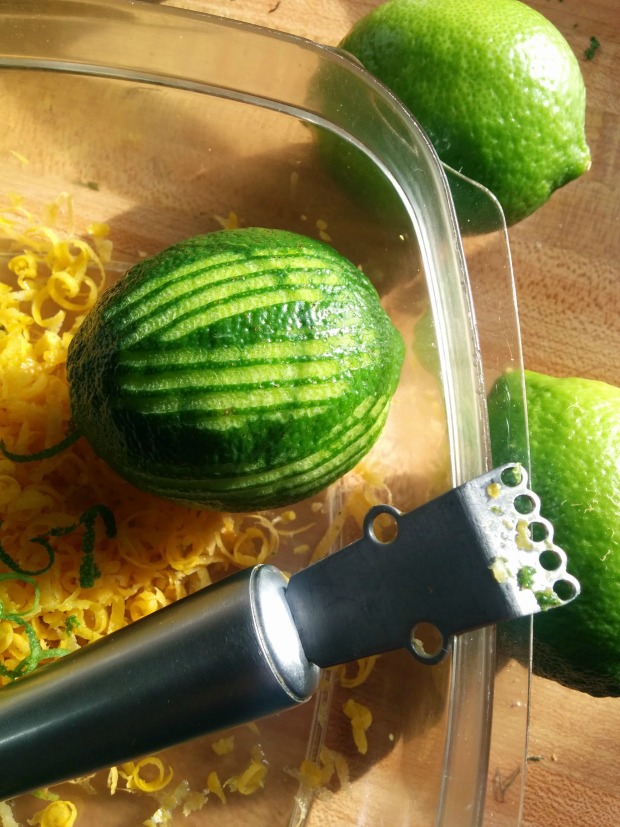 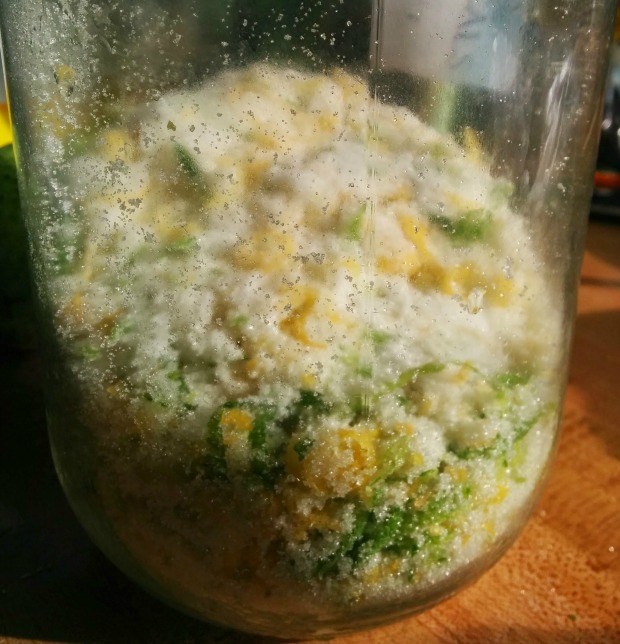 First, I zested the citrus fruits (this takes a while, but smells lovely) and mixed the peels with a cup of sugar, where they sat, covered, overnight. I put mine in a jar, and saved the skinless citrus in the fridge for juicing into something later.

The kit comes with little resealable plastic bags filled with powdered Cinchona bark, and other herbs and spices that you can use in combinations you like. Because I sought astringency, I chose gentian root, juniper berries, star anise, and quassia bark. The kit also includes lavender and cardomom pods, but I skipped them, because my taste buds weren’t in the mood for their more floral tastes. 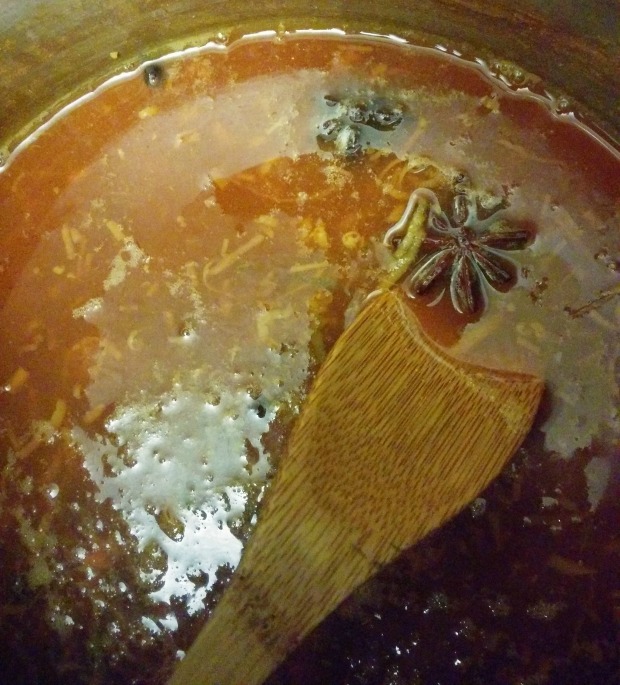 On Day 2, I mixed my chosen botanicals with water in a saucepan, and as directed, brought them to a boil, immediately lowered the heat, and let them simmer for a half hour. It was while I was mixing them that I realized I’d failed to notice that the recipe calls for lemongrass, which I didn’t have, and is not available just anywhere. Drat. I thought I’d skip it, but then Googled tonic water recipes online, and they all called for a significant lemongrass presence. 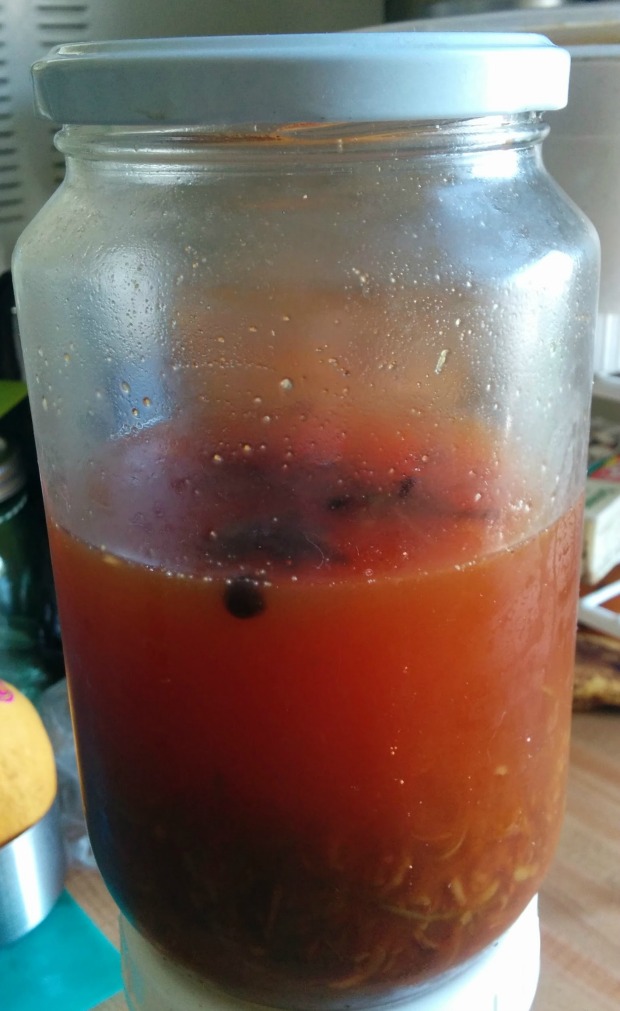 OK, I’d fix that later. I mixed the simmered brew with the citrus-zesty sugar I’d combined on Day 1, and let it chill overnight. I read somewhere that the reason you add the zest after the simmering because you want a fresh, not cooked, citrus taste. 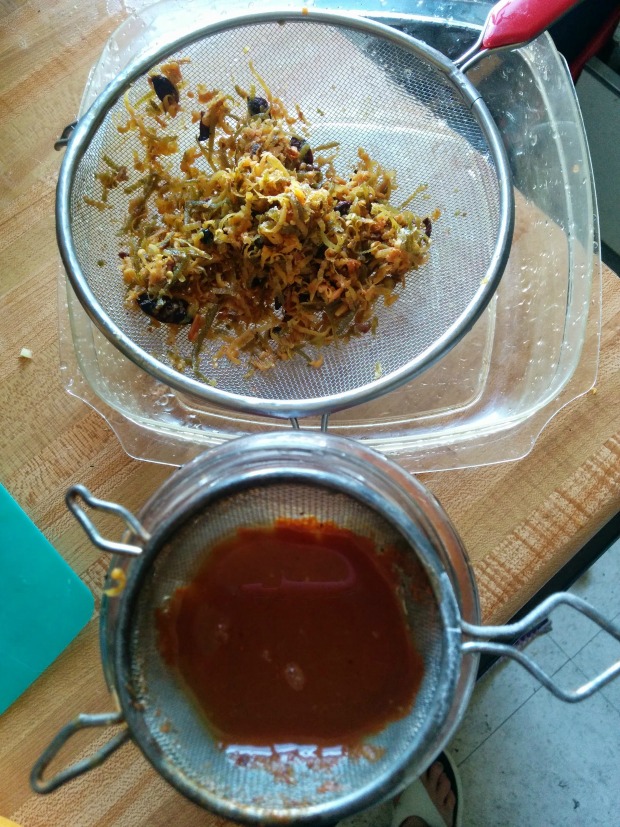 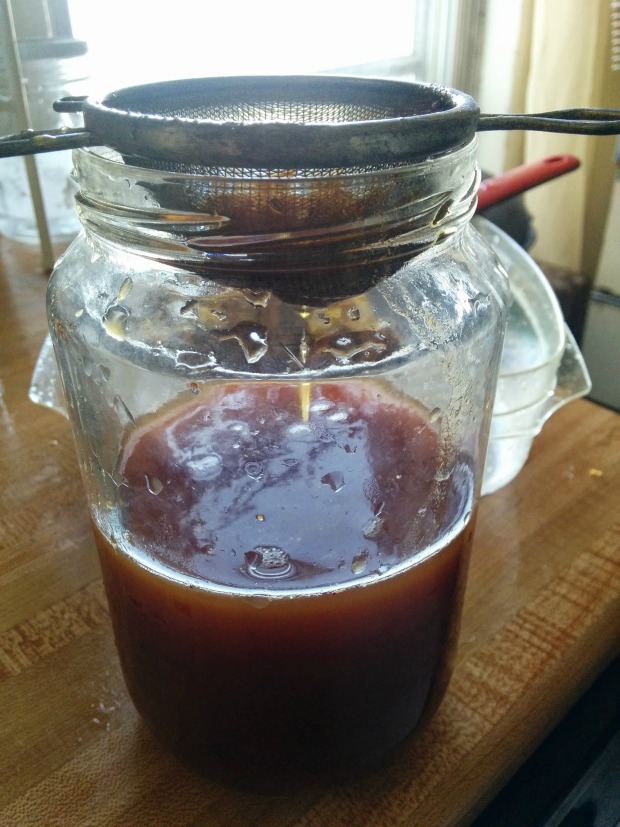 The next day I strained it. It was just like straining stock. First I strained the solids out, then, with a finer strainer, as much of the Cinchona bark powder sludge as I could. I also squeezed as much flavor-filled liquid as I could out of the solid ingredients. Then I let the jar sit in the fridge for a couple of days. 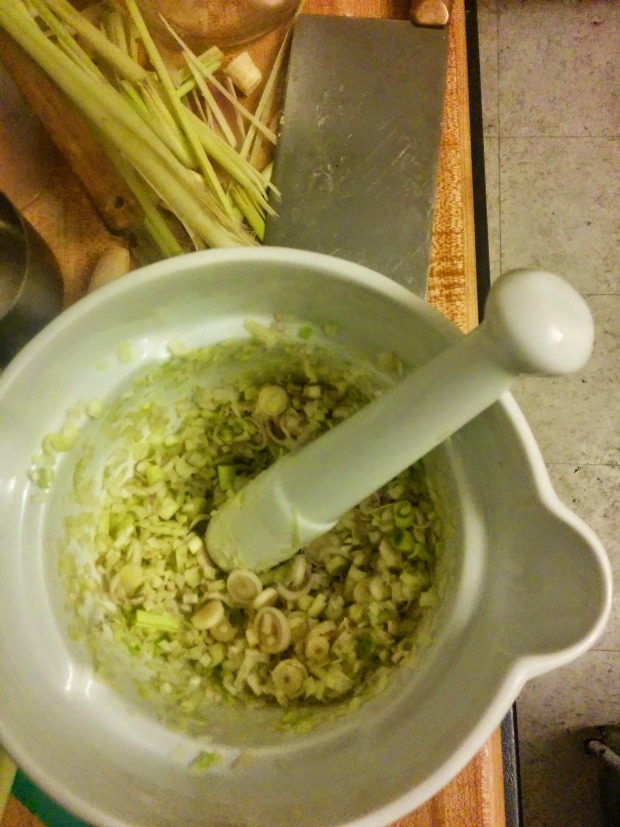 By this time, I’d gone to Chinatown and obtained the lemongrass. I chopped it, then bruised it with a mortar and pestle. (For those who’ve never cooked with lemongrass, you have to take off the tough outer layer of the stalk, as well as the very top and bottom. The tender inner part is what you want, just like with leeks. Bashing it around a little releases the aromatic oils.)

Then I gave it the same treatment as the other ingredients: I brought it to a boil (in a small amount of water), reduced the heat, and simmered for half an hour. It was easy to strain out the lemongrass stalks. Then I added that wonderfully-scented water to the rest of the brew.

While the promising-smelling liquid sat in the fridge, I made some rich simple syrup. “Rich” just means you add more sugar than usual. Sugar doesn’t dissolve in alcohol. The sugar in simple syrup has been dissolved, so keeping some around makes cocktails that require sugar a snap to make. 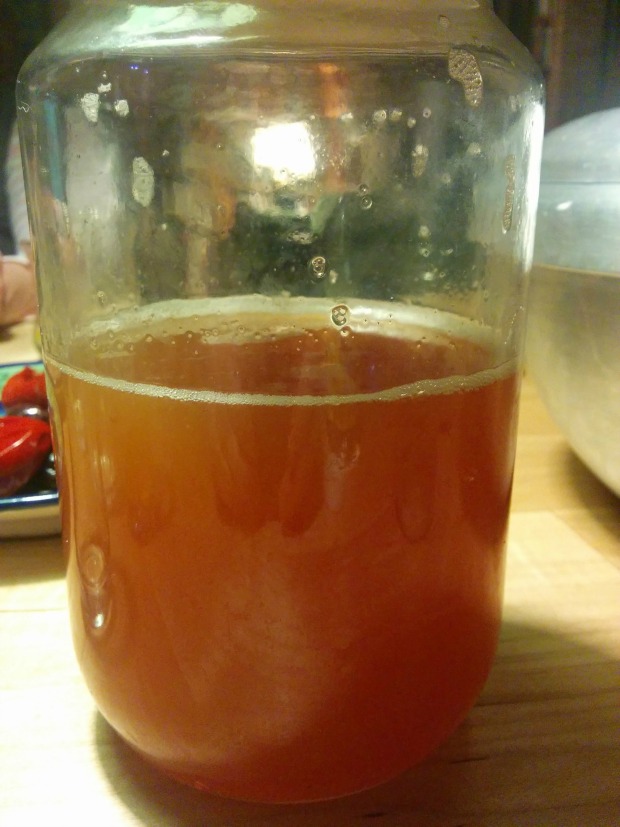 By the second day, the Cinchona bark powder had settled to the bottom. I poured off as much as I could of the clear (not really clear; it’s peachy/rusty colored, but it’s fairly transparent and you can easily see the sediment at the bottom) liquid into another jar.

It was at this point that I broke with the instructions intentionally. The recipe calls for two or three cups of rich sugar syrup. I tasted the tonic, and to me, the single cup of sugar added with the citrus zest was plenty. No way was I going to ruin it by adding any more. 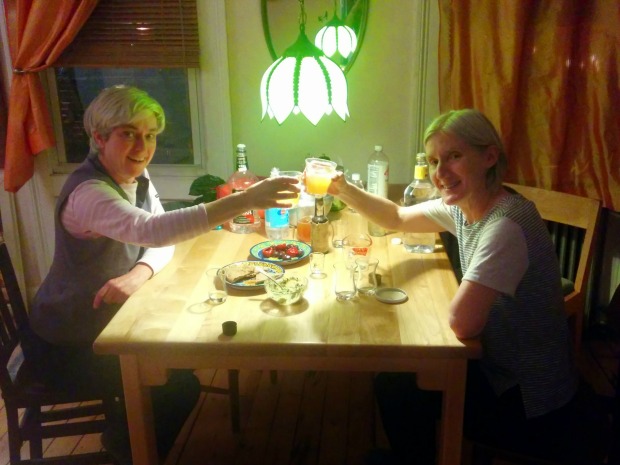 I had a little tasting party with two friends that night, and they both agreed. I’ll put that syrup to other uses. 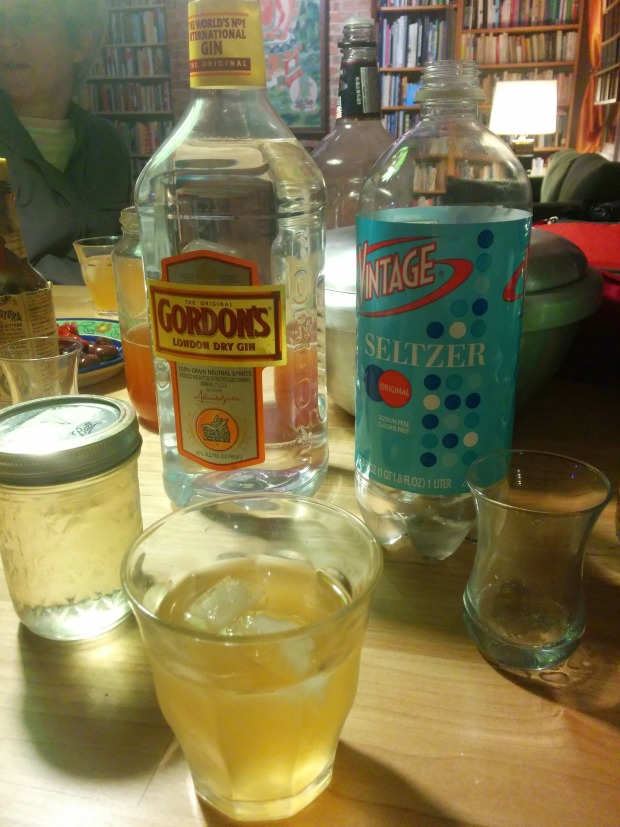 The reason we all agreed that the tonic needed no more sugar was because it was delicious. We liked it plain, with just some seltzer. We liked that with a few dashes of bitters added. And we liked it with the gin. But honestly? I liked it best with just seltzer and bitters. It has such a lovely, refreshing, complex, adult taste. If anything, I’d make it even more bitter next time.

Conclusion:
I love to experiment with new ingredients, flavors, and techniques, so this was fun. It gave me a new appreciation for alcoholic concoctions like bitters, apertifs, digestifs, and all those witches brew-y potions that started out as medicine and ended up on the shelf at expensive, precious little artisanal mixology parlors in Brooklyn. 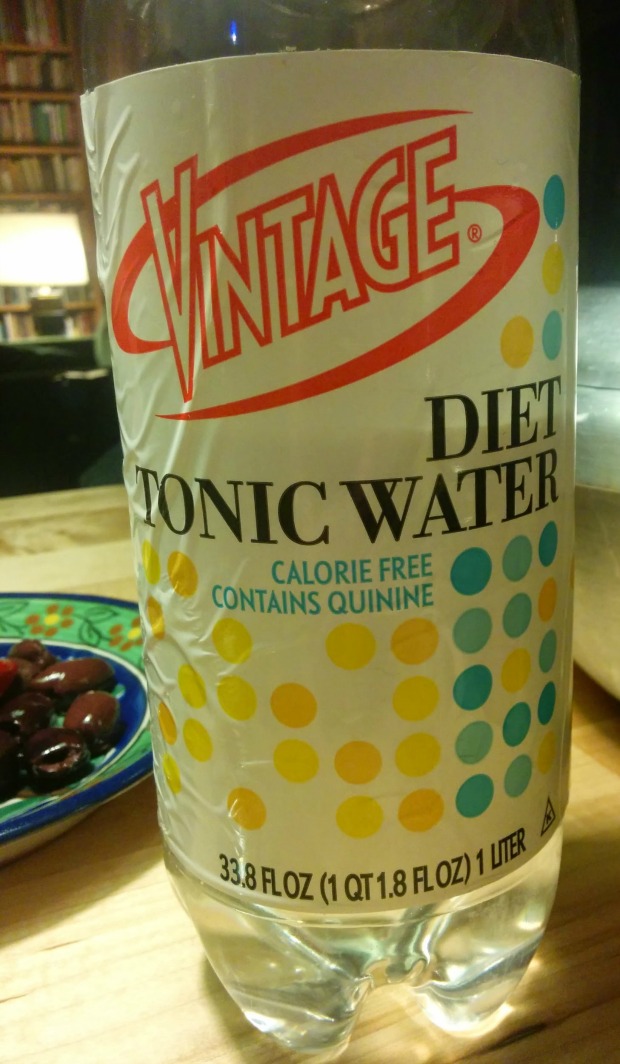 There was enough Cinchona bark powder left over for several more batches, so the tonic made with this kit is way cheaper than the fancy bottled tonics now available. I will never drink supermarket tonic again. OK, I probably will. If I have to. But strictly from thirst, and not happily.

Inside the Artists’ Studio with Seth and Maddy Lucas