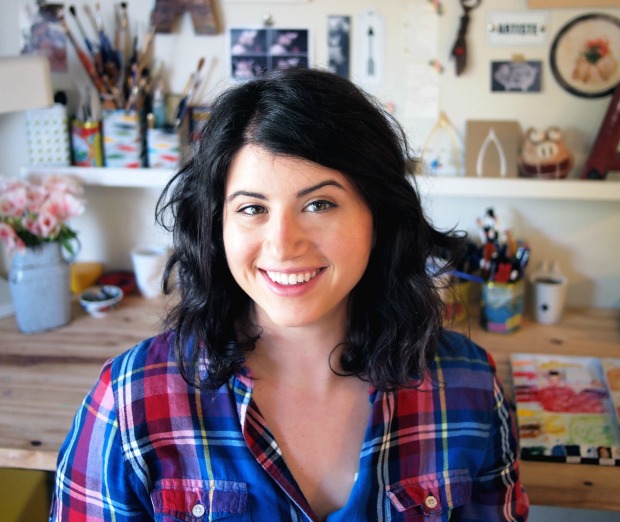 Attorney-turned-illustrator Alyson Thomas has always loved drawing, painting, and making things, but says she “didn’t think anything of it” until she was voted “most creative” in her college dorm. She didn’t exactly leap from law school to illustrating designs like the ones featured on our Cocktail Diagram Glasses, either.

Alyson’s career started in a very different place–the Department of Homeland Security. From doodling on sticky notes in meetings, to turning in her badge and spending a year on a drawing project, Alyson’s love of illustration grew and eventually blossomed into a full-time business.

She took a break from diagramming delicious things, visiting “nerdy cocktail bars,” and generally being awesome, to answer a few questions about quitting her day job and the creative endeavors that followed. 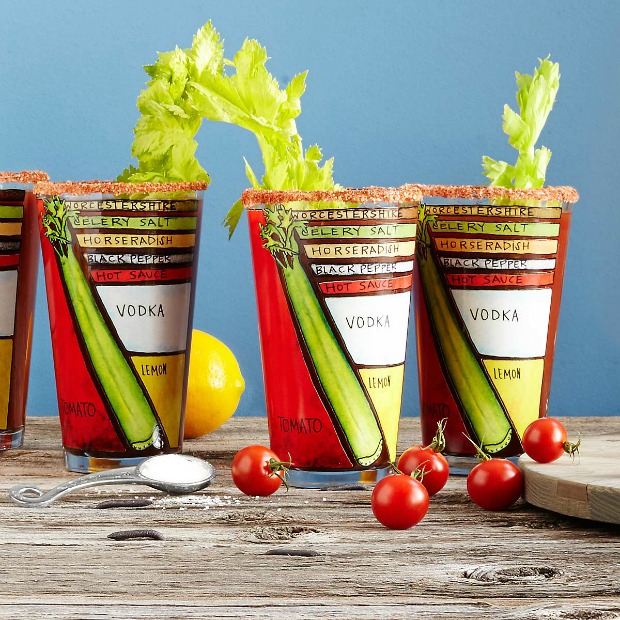 Back when you were working as an attorney, did you ever find yourself doodling on documents or daydreaming about creating art when you were trying to prepare for a case? If so, what did you doodle and/or dream about?

Ha! Kind of. My attorney job was as an Asylum Officer for the Department of Homeland Security, where I’d interview people seeking political asylum here in the United States. (Yes, I had a badge.)  As you might imagine, it was a pretty intense and emotionally-draining job, so I didn’t have downtime while working. But, during a mandatory 6-week training program on a federal base in Georgia, I did do a fair amount of drawing on Post-Its during our 8-hour/day classes. At that point, I had been already doing the job for months, so drawing helped me stay sane during the often repetitive classes. That training period was also the first time I received feedback on my artwork from strangers, and it was overwhelmingly positive. I remember being pretty surprised at the time; they were just pen doodles on Post-Its!

A lot of my old notes from in-house training also have doodles — a little sad character named Blocky, smoke explosions, jars–on them. I’ve always been the type of person who can pay attention a little better when my hands are busy. Looking back on the doodles I made during that time though, and I’d have to say they were a little dark. Well, at least a weird hybrid of cute and dark.

What inspired you to take that leap and “quit your day job” to pursue art full time? How did you initially become interested in illustrating?

In all honesty, leaving my day job had absolutely nothing to do with any sort of dream to be a full-time artist. I was burnt out from the work and needed to quit. I had saved up 6 months of living expenses and my husband was still working, which gave me some runway for what I began calling my “sabbatical.” Honestly, I wasn’t sure what my next path was going to be. I applied for some other legal positions, and did some contract brief-writing here and there.

Before starting with the Asylum Office, I had been unemployed for over a year out of law school, so I knew from that experience that to keep my spirits up, I needed a project to work on to at least give some structure to my days. Drawing was fun, relaxing, and helped pass the time. So when I began my “sabbatical” in 2010, I also started a daily drawing project called “Meat Sections.” Food has always been a source of interest and obsession for me, and a project creating butchery-style diagrams of, well, anything, had enough legs to last me for 365 days. I joined the 365 project group on Flickr, signed up for a blog, started a Twitter account, and began creating and posting artwork every day.

The response was pretty immediate. By mid-February, someone contacted me via Flickr to buy a print, so I activated my Etsy shop in order to accept the order. During SF Beer Week that year, I created a diagram of a great beer from The Bruery I had sampled, and then shared it with them via Twitter. A few hours later, they emailed me with an offer to create artwork for all of their beers! So these early positive responses really fueled my work, and by July, I really felt like this could be a viable business after my first craft show – IndieMart. 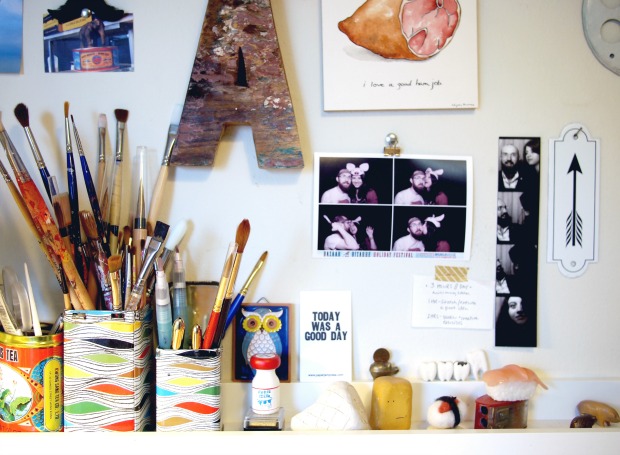 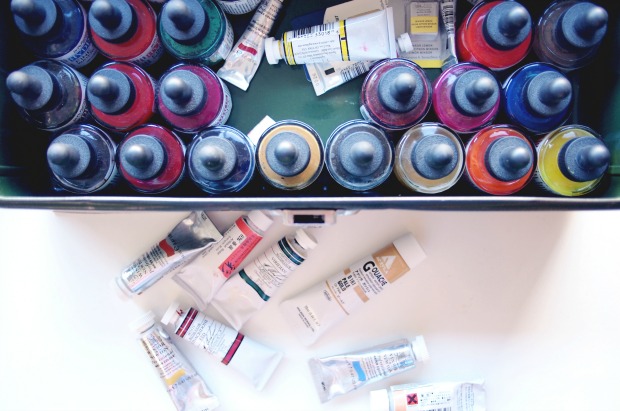 You describe yourself as self-taught. Could you elaborate on that a bit? What steps did you take to teach yourself your craft, and how did you develop your skills over time?

As a student, in high school or in college, I never took an art class. I’ve always been a creative person I suppose – drawing, painting, cooking, sewing, making videos – but I really didn’t think anything of it. I kind of thought that’s how everyone was (until I was voted “most creative” in my college dorm). The period of unemployment after law school is when I started watercoloring for the first time, using a book my then-boyfriend/current-husband Steve bought me. (Why he bought it, I have NO idea.) I also checked out a ton of books from the local library to teach myself basic drawing and painting techniques. I started just doing illustrated journals, and was really inspired by Danny Gregory, both his books and his blog. I might have some innate talent, but I really think so much of succeeding in art and in life is just about putting in the time and effort. I had a lot of time on my hands back then and used it to be creative.

And then, with the Meat Sections project in 2010, having a self-imposed schedule of doing a daily drawing really accelerated my skills. It’s easy to see when I go back and look at my work from that year. Since that time, I have taken two adult art classes, both at Root Division here in San Francisco. One on drawing and one on acrylic painting. 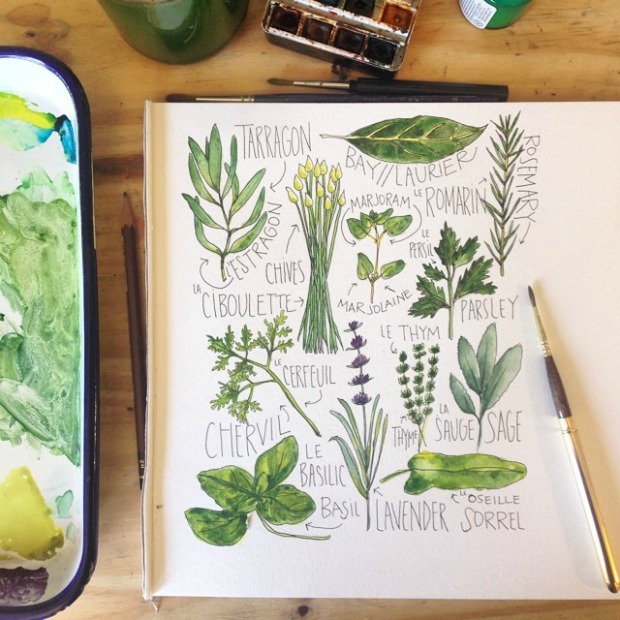 What gave you the idea to incorporate classic drink recipes into your designs?

The first cocktail artwork I did was for my second solo art show in 2012, entitled “Beer, Bourbon, and BBQ.” I made 4 cocktail pieces, all featuring bourbon – Mint Julep, Old Fashioned, Manhattan, and Boulevardier. The originals all sold fast and then I knew I was on to something. Most of my artwork is inspired by my desire to research and learn more about food and drink, and then share that information with others. It is really quite helpful to have a visual representation of what goes into various cocktails, and in their (generally) correct proportions. You can understand more about how drinks come together – like how a whiskey sour, a margarita, and a sidecar are all basically constructed the same with slight tweaks. 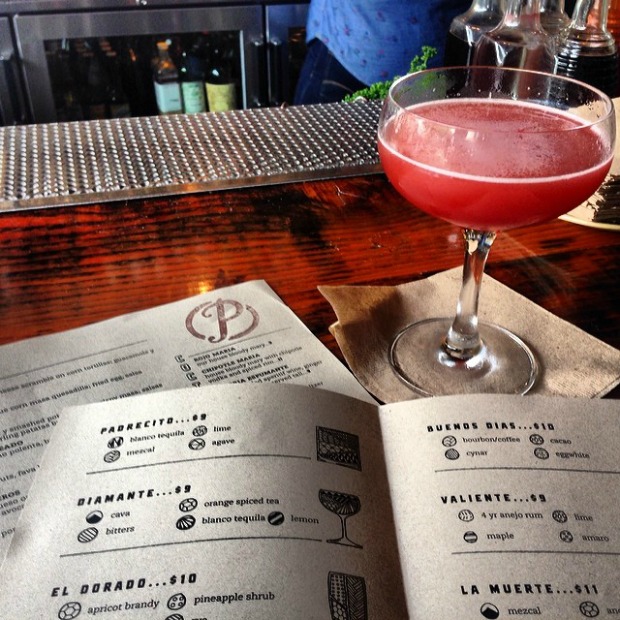 Speaking of classic drinks, you mentioned on your blog that you patronize nerdy cocktail bars. What makes a cocktail bar nerdy? Is this research for your work, or just for fun? Or both?!

Good question! In my mind, a nerdy cocktail bar has an interesting menu, uses somewhat esoteric ingredients, has impeccable technique, and last but not least, knowledgeable bartenders who are obviously passionate about the cocktail world. I think in the last 3 years or so, cocktail bars have really raised their game when it comes to these criteria, so finding nerdy cocktail bars is easier and easier. If a bartender can not only answer your question about a particular drink ingredient, but also will expound on the history of it, how they like to use it, or maybe give you a sample taste, that’s a nerdy bartender in my book. The ultimate nerdy cocktail book in my opinion is Dave Arnold’s Liquid Intelligence. Definitely advanced, science-based, knowledge, but amazing.

I’ve also had the great fortune to work with several bars, either making custom artwork for them, or illustrating their menus, like Padrecito in SF. [Shown above.] Oh, and my barfly habits are definitely both for fun and research!

What’s your best advice for someone looking to switch career paths to follow their dreams of becoming an artist?

Do your work consistently and regularly, and then put it out there. You aren’t going to know if you can make it until other people can see your work and respond to it.

Uncommon Knowledge: Does tickling have to tickle?