Like most Americans, I’m pretty unaware of artists who aren’t American or European. Embarrassing but true: interpreting the art of very different cultures takes work, and I tend to approach art (as I do most things) impatiently, wanting immediate pleasure. So I’d never heard of Ghanian-born, Nigeria-based artist El Anatsui when the Brooklyn Museum opened his first solo exhibition in a New York City museum. (Which runs through Aug. 4, 2013.) 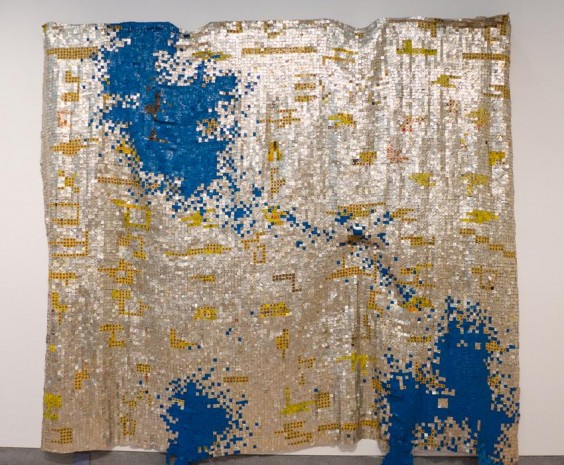 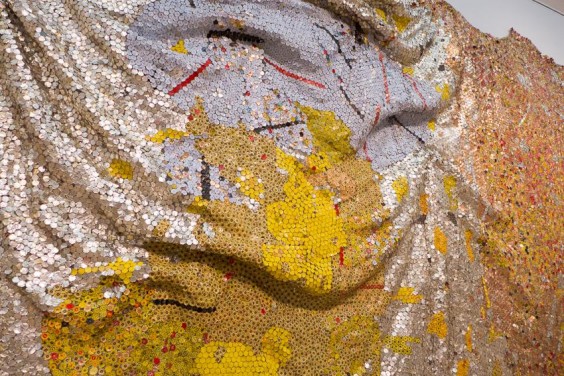 Now, thanks to Kevin Dumouchelle, Associate Curator of the Arts of Africa and the Pacific Islands at the museum, who organized the show, this lazy ethnocentrista has been gifted with a reward she didn’t deserve: a broad, deep encounter with overwhelmingly spectacular art. Totally accessible on a number of levels, El Anatsui’s work drew me in, motivating me to spend much more time learning about it than I normally do at an art show. I went twice. I watched all the videos. I never do that. 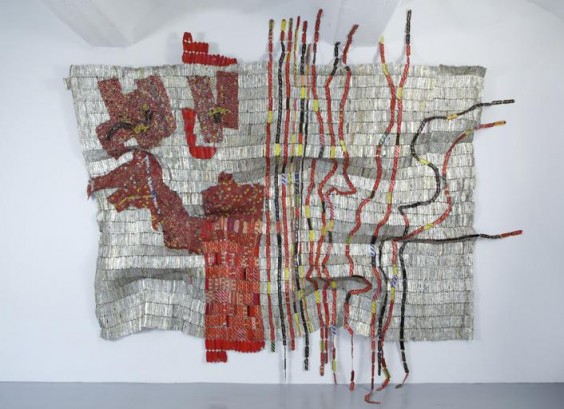 I thought this show would be of interest to the UncommonGoods community for two reasons: first, because it bridges the same fertile territory between “art” and “craft” that a number of pieces in our collection do, and second, because we love art made of recycled and upcycled materials. El Anatsui is perhaps the maestro of this practice. 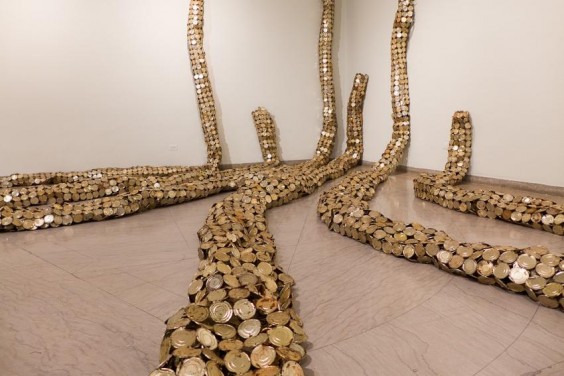 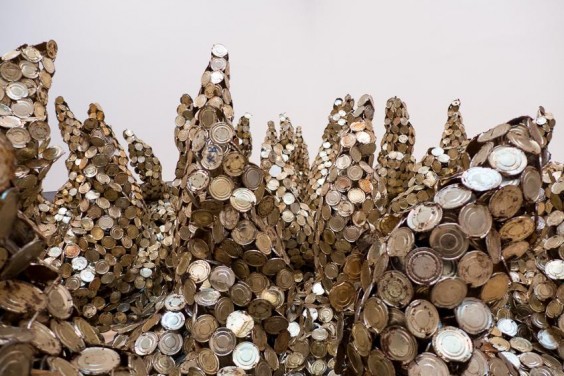 Using tools ranging from chainsaws and welding torches to improvised small crafts tools, he has marked, joined, and shaped materials ranging from yucca graters and railroad ties to driftwood, iron nails, and obituary notice printing plates. More recently, he has focused on condensed milk can tops and used aluminum liquor bottle caps, with various brand names, from a distillery in the university town and contemporary art mecca of Nsukka, Nigeria, where his studio is. 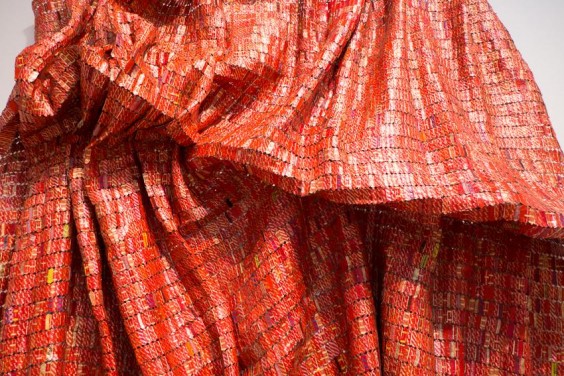 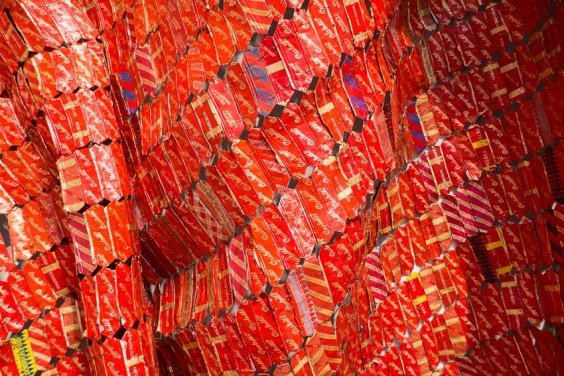 Anatsui prefers not to call what he does “recycling,” and in fact, the connotations of that word are too narrow in the context of his work. The discarded materials he uses are so miraculously transformed into beautiful, shimmering, sumptuous works of art that his preferred word, “metamorphosis,” does seem more apt. At least one critic has dubbed it “alchemy,” and I can totally see why. (They’re metamorphosed into money as well; at least one piece is rumored to have sold for about a million dollars. So UG will not be offering his stuff any time soon, unfortch.) 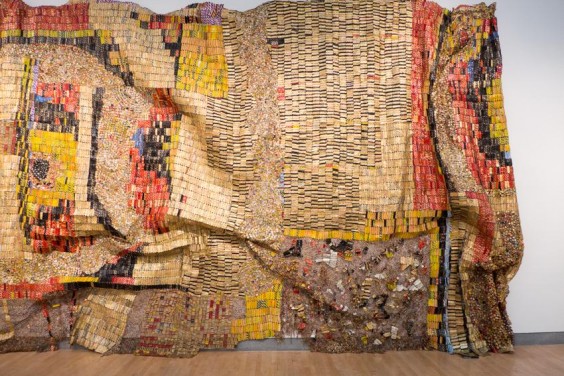 The show I saw (twice!) at the Brooklyn Museum consists of 30 works in metal and wood, the largest and most visually dominant of which are huge, mosaic-like, hanging tapestries made of the aforementioned bottle caps. 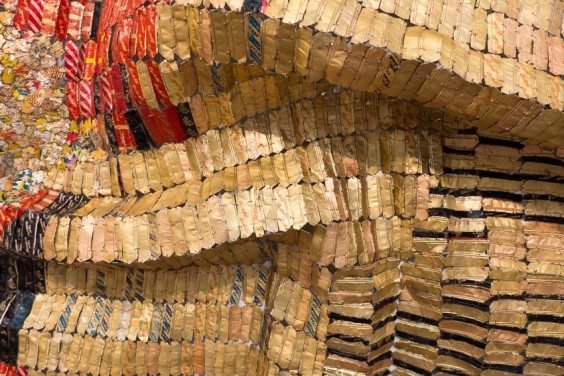 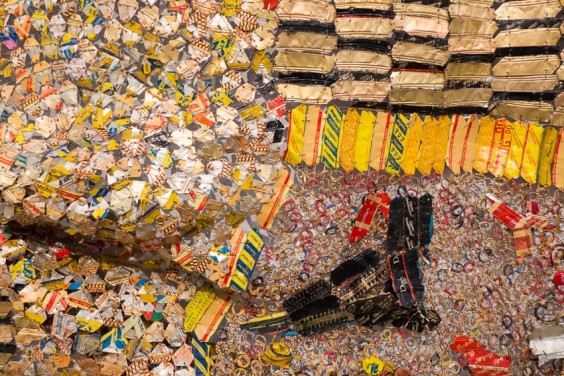 A tremendous amount of meticulous craftsmanship goes into every tapestry, as you can see in this short Art21 video. Each is composed of thousands and thousands of aluminum liquor bottle caps. Anatsui’s 40-odd assistants cut and fold the caps into a seemingly endless multitude of shapes. “For each new pattern or texture that I’m introducing,” explains the artist, “I have to show them how it’s done. Because I find that, as an artist, if you don’t maintain physical contact with handling the material… the work might end up not having a soul.” 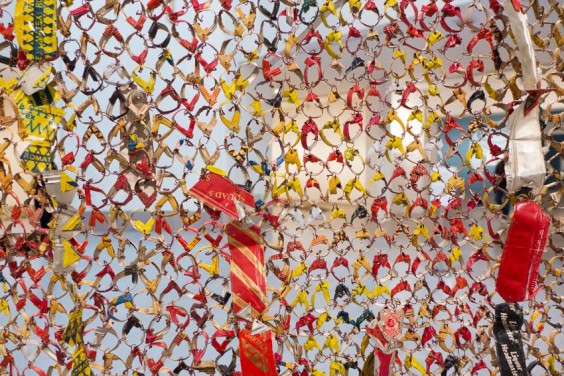 They then painstakingly “sew” them together with copper wire, patchwork-style, in a dazzling variety of color and texture groupings, Many depict traditional Ghanian symbols and patterns, while also evoking the history of the African slave trade, in which liquor was a commodity that Europeans exchanged for human beings, as well as the contemporary reality of global consumption and waste. Surprisingly, Anatsui received his early education in a Presbyterian mission with a European curriculum, and was isolated from his own culture until, in his late teens, he decided to “indigenize [his] consciousness” by immersing himself in Ghanaian culture. That probably at least partly explains someone like me found his work so easy to engage with. 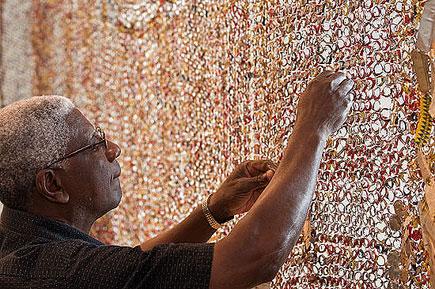 El Anatsui doesn’t like to tell curators how to hang the pieces, so they have to be strong from every angle, as there’s no way to predict what kind of stress any given area might sustain. Before uniting all the sections of a piece, his crew pulls each section this way and that, to test their strength and make sure they’ll withstand being hung and re-hung in indoor and outdoor installations around the world. Without this careful craftsmanship, Anatsui’s brilliant, painterly compositions couldn’t perform their artistic function for long. 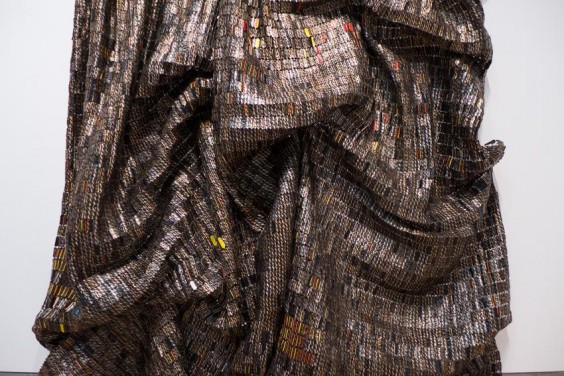 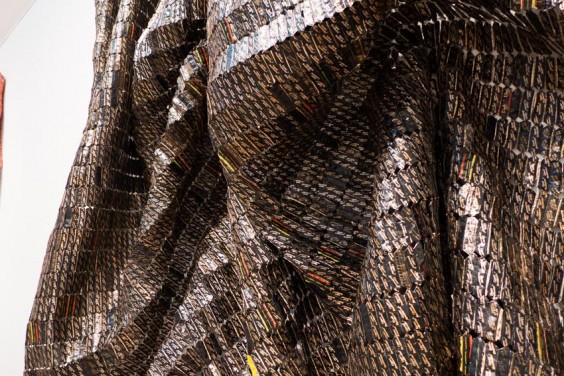 There’s no way to adequately describe in words or photographs how stunning, and varied, his work is. Some of the hangings, pieced of solid color blocks of flattened parts of caps, are monolithic and imposing, even though they’re made of what’s easily recognizable as garbage. Some, made of cap parts shaped into circles that are loosely woven together, are semi-transparent, and hang above and around you making the room you’re in look transcendentally magical, as if dust motes had turned to gold. 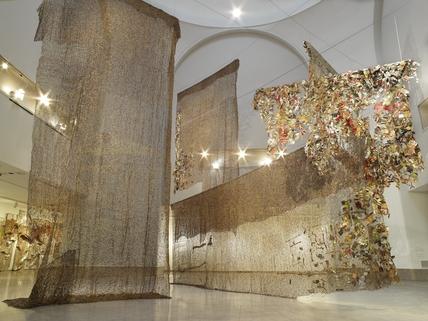 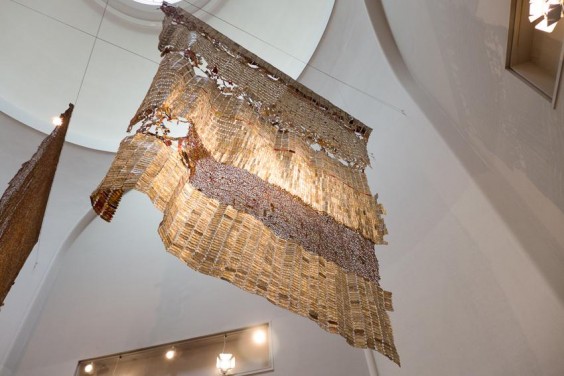 One of the most amazing things about his work, to me, was that usually in the art world, consumer items, brand names, and garbage are used to say something negative and depressing. We’re meant to be reminded of the way consumer culture and advertising infiltrates nearly every aspect of our lives, usually degrading the environment in the process. When I see this kind of work, I often think, “I didn’t need you, Mr./Ms. Art School Graduate, to tell me about this. We all already know it.” 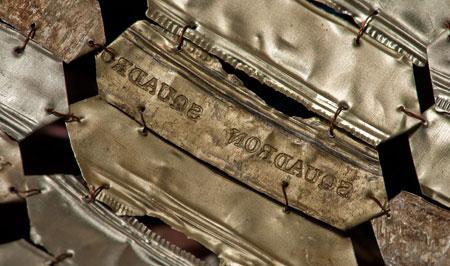 Courtesy of the artist and Jack Shainman Gallery, New York

But Anatsui’s work lifts you up and inspires you in all sorts of ways: artistically, environmentally, physically, and, dare I say, metaphysically. Anatsui shows us that the possibilities of re-use to create value of all sorts are unlimited.

Uncommon Knowledge: In which Presidential election did not all states vote?