When Kira, our operations analyst, and Jonathan, our sysadmin, saw our new Beer Making Kits, they knew they had to try one out. And luckily for the UncommonGoods team, they shared their results freely. You might think home-brewing is one of those “Don’t Try This At Home” type activities, but read on. Kira and Jona offer up some great tips for the novice brewer.

Beer making kits are $40 each and come in Everyday IPA, Jalapeno Saison, and Chocolate Maple Porter. 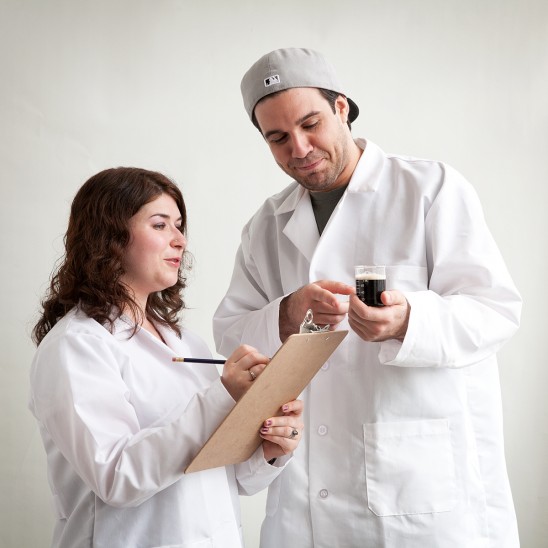 Kira: I come from Wisconsin, the land of cheese and beer, and distinctly recall my friend’s father making beer in his bathtub when I was in middle school. It smelled terrible. However, I am an amateur cook, and really love the idea of crafting my own brewskis.

Jona: Next to steak, beer would have to be my second favorite food. Many times over I have cooked a steak in various ways but I was never able to make my own beer so I was excited about the opportunity.

Kira: We will successfully make a potable brew that will not stink up our tiny Brooklyn kitchen.

Jona: Also, this will be a fun alternative to going to the store and buying our own. 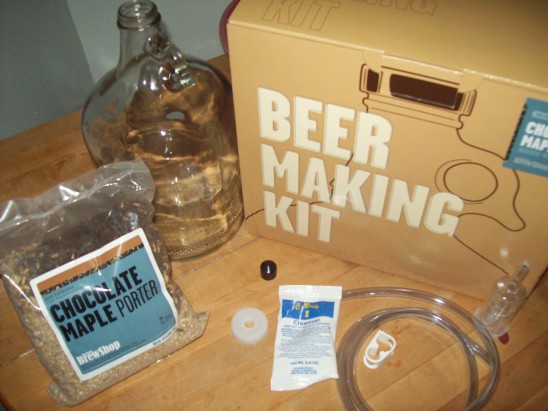 Kira: The instructions mention that the first and most important step is to sanitize everything, lest your beer turn into a poisonous concoction only meant to clear out toilet drains (I may have made that part up). The actual first step is to wash every dish you have as you will need every square inch of sink and drying rack space (this step is probably not applicable to you dishwasher folk).

Jona: I thought we were missing a few parts from the box at first and was all like “Noooooooooo! However will we finish our Gift Lab?”

Kira: Luckily, the outline of the parts is drawn on the side of the box, and the missing parts were just under a spare bit of cardboard.

Jona: So after sanitizing our entire kitchen (seemingly), the next step was to create “the mash.” This is not to be confused with “The Monster Mash.”

Kira: I was perhaps a little paranoid about the sanitizing, but our kitchen would never pass health inspection standards. Anyway, we loved making the mash! It smelled delicious, like nutty, toasty, chocolate-ly- 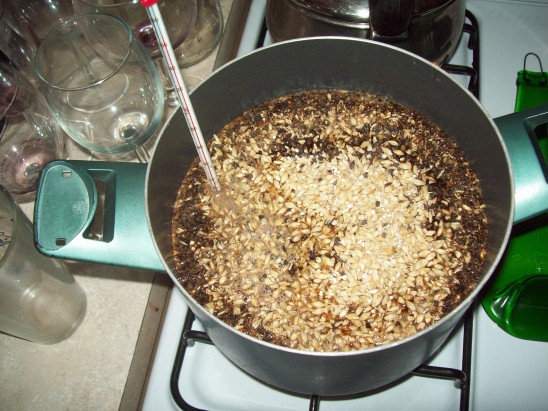 Jona: Oatmeal! Just like the instructions said, it was very much like making oatmeal, though I’ve never had chocolate maple oatmeal before. When time came to start the straining process we decided it would be best if I handle the mixture since Kira would have most likely dropped the entire batch.

Kira: So now the internet knows that I am clumsy and weak. In my defense, we’re talking about a gallon and a half of ridiculous hot liquid slowly poured from an already heavy dutch oven (the large pot we have) into a colander. 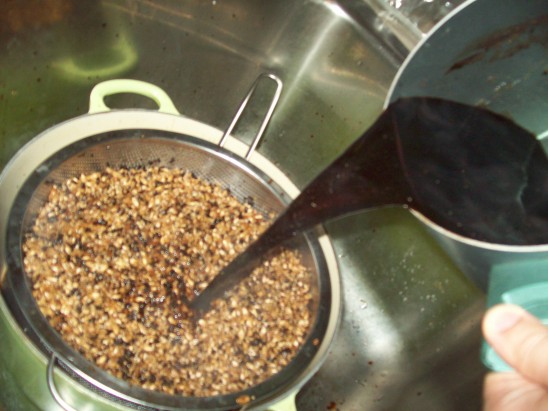 Jona: And then you have to do it AGAIN. At least after this part we were done with the physical labor for another 2 weeks.

Kira: No, but we weren’t! Jona has clearly blocked this part out of his memory for self-preservation purposes. Or maybe we were just sleep-deprived? Don’t make beer on a weeknight, kids.

Jona: Oh yeah, the funnel! From hereon we simply added the hops, maple syrup and watched the temperature for another 60 minutes.

Kira: The hops looked like pellets. Just calling it out.

Jona: Yes, agreed. I would say more like owl pellets. Now, I also want to add here that we do not own any ice packs (why use an ice pack when you can use a steak?) We filled up our sink with cold water and threw in about four trays worth of ice cubes; as a result, the cooling process took longer than expected.

Kira: At any rate, once the “wort” got down to a temperature that wouldn’t kill the yeast, we had to pour it into yet another container (still bitter about the dishes, nah). I held the funnel steady while Jona slowly poured our liquid gold into the sanitized jug.

Jona: Now came the time to “pitch the yeast” into the jug so that the yeast would “wake up”.

Jona: … Right. What the instructions don’t tell you is that shaking the jug to wake up the yeast requires you to put your hand over the top of the jug, as the stopper hasn’t been attached yet. This was pretty difficult at the time, but at least I got to lick my palm to get a fresh taste of the brew. The mixture had an unrecognizable taste but then again I only got to taste what dripped over my palm and fingers. 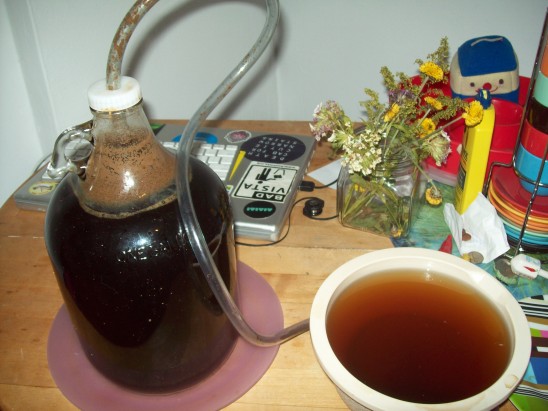 Jona: From this point on, we had two weeks to find as many empty bottles with self-closing tops as we could. This was not so easy, avid beer drinkers as we are. So we decided to use the growlers we have on hand from our local beer shop.

Kira: So we had to transfer the beer from the jug into a pot on the stove with more maple syrup (yum!). The kit includes a “racking cane” to be attached to the tubing to siphon the beer from one place to the other. You can’t just dump it, as there is yeast sediment or “trub” at the bottom (who came up with these terms? Dr. Seuss?)

Jona: The instructions say that you should practice with a pot of water. We are impatient people, and we know from science, so we thought this step was unnecessary.

Kira: How wrong we were.

Jona: Luckily, we remembered yet another Simpson reference, where Otto siphons gasoline from a rival school’s bus using a tube (sadly, he ate the mint first). So we attempted the same technique, which proved successful!

Kira: If not entirely sanitary.

Jona: Once the beer was in the pot and the maple syrup dissolved, we had to repeat the process, this time getting the beer in the growlers.

Kira: We also decided to use the power of gravity by putting the growlers on our floor (super clean, really!) below the stove top. 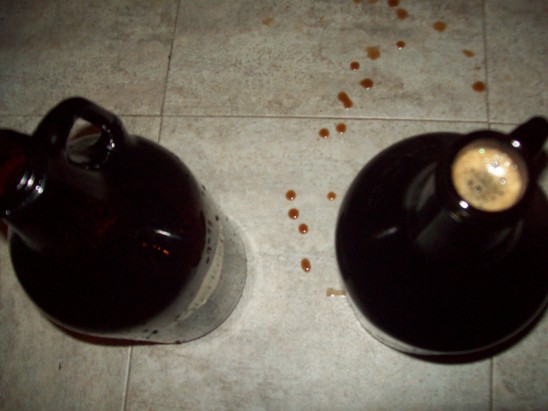 Jona: This was cool to watch, as you could see the liquid flow.

Kira: And we got to taste the beer! And it wasn’t poison!

Jona: Overall, the entire process went well, our final product tasted, smelled and looked like beer. The yeast buildup was not what we expected; this could have been better had we shaken the jug with a bit more vigor when we added the yeast. Everyone in the office wanted a taste of our brew; needless to say there were thumbs up across the room. 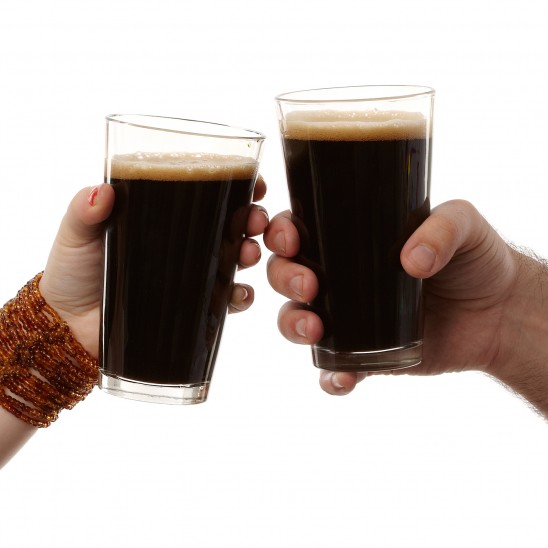 Jona: A little intimidating at first but in the end but we had a lot of fun. We still have the materials to make another batch and all we need to do is get our hops, yeast and barley.

Kira: It didn’t smell and it was potable! It would be certainly easier to make beer in a bigger kitchen, but this was not impossible. However, you do need a helper; I have no idea how one person could do this on her own.

Getting thirsty? Beer making kits are $40 each and come in Everyday IPA, Jalapeno Saison, and Chocolate Maple Porter.

Find a friend, get started, and let us know how your home brew turns out!