Now that Thanksgiving has come and gone, the Christmas shopping season is in full swing. Here at UncommonGoods, we like to celebrate the act of giving, but let’s face it – it’s also fun to receive. So I thought it would be fun to mine through some of the data we’ve collected from holidays past and see if any patterns emerge that indicate who gives the best gifts. That way, I’ll know who to be *extra* nice to when next Christmas rolls around…

Below are 7 interesting trends in Christmas gift giving.

(Note: Because we’re a privately held company, I’m not at liberty to divulge just how much data was involved in doing this analysis, but let’s just say it’s, like, a lot. There are also some cases below where I realize seeing the actual dollar figures would be nice, but again – it’s not something I’m really allowed to share. Sorry.)

This first observation might seem fairly obvious to some people, but I think it’s interesting nonetheless to see it played out in the data. Women plan ahead; men procrastinate. Women consistently get their holiday shopping done earlier in the season – it’s not until about December 6th that men start to get their act together and their buying rate starts to surpass that of women. So if you want a well thought out gift, you’re more likely to get it from a woman than a man.

(Since we’re an internet retailer, we necessarily have shipping cutoffs somewhere between Dec. 21-23 – otherwise, I’d expect there’d be a big blue spike around 11pm on Christmas Eve.) 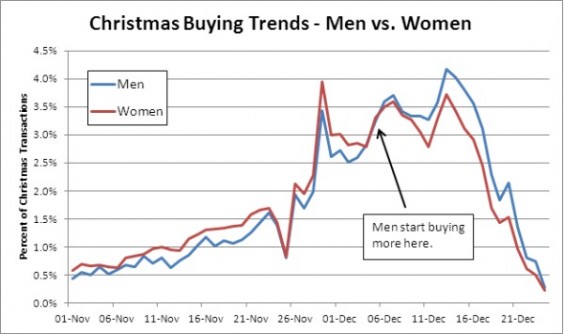 But even worse than men in terms of planning ahead are college kids. Splitting the data by age group, we can see that the older you are, the earlier in the season you get your shopping done. 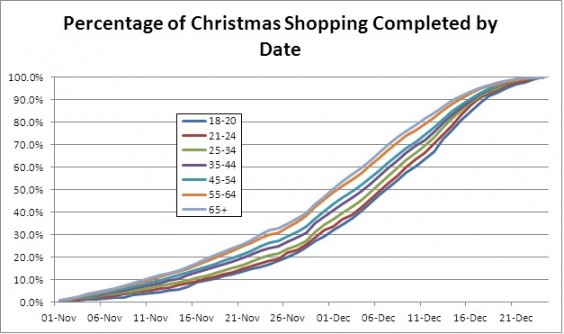 Breaking it down, it looks like the 65+ age group has 60% of their shopping done by Dec. 4. It’s not until Dec. 10 that the 18-20 set get 60% of their shopping done – almost a full week behind their grandparents. I guess experience teaches you not to wait until the last second. Again, it may seem obvious, but if you’re expecting a gift chosen with a lot of forethought, it’s less likely to come from a teenager.

People who are still on AOL are often mocked. But maybe they shouldn’t be. They do, after all, give us the best gifts. 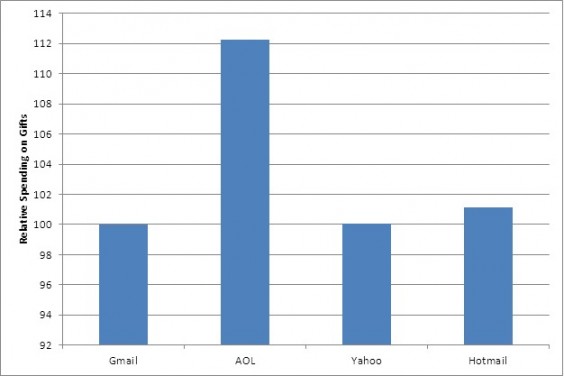 We found that the average dollars spent on gifts was pretty flat across email providers, with the notable exception of AOL. AOL users spent on average 12.2% more than users of other email services.

So while a recent study by Hunch.com found that Gmail users are more attractive, better educated, and better dressers than AOL users, they are also apparently more likely to be cheapskates.

For a number of reasons – economic, social, environmental – we try our best at UncommonGoods to carry products that are made in the USA. We’re not perfect at it – sometimes a product that is really cool or innovative is only available from overseas manufacturers – but when we can, we try to support local artisans and producers. So who does this really appeal to?

Not so. In fact, looking by region at the percentage of all orders that contain items made in the USA, we see the exact opposite. 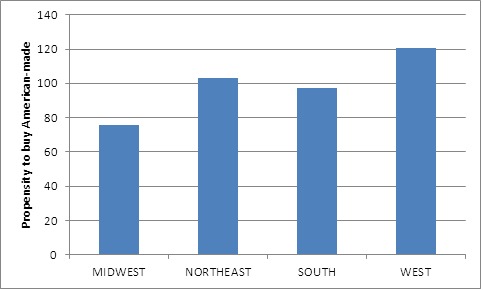 So if you want something that supports artists and designers that reside right here in the good old U-S-of-A, expect it from a Californian.

4. Men have no imagination.

I hate to pile on men here (being a man myself, after all), but apparently men are a lot more likely to run out of good ideas and just buy someone a gift certificate. 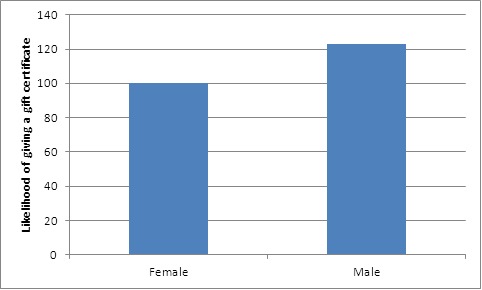 In our data, men are 23% more likely to give a gift certificate than women are. I guess a more positive way of putting this is that men are more utilitarian, and more likely to give you the gift of options, guaranteeing that you’ll like what you get.
Still seems kind of lame to me. If you want a more personally meaningful gift, you’re more likely to get it from a woman.

5. The older you get, the more you care about other people.

OK, so we have this program at UncommonGoods called Better to Give, where we give $1 from each order to one of four non-profits that customers can choose from at checkout. It’s a cool program – it really reflects what UncommonGoods is all about and it’s one of the reasons I was really excited to work here in the first place.

The thing is, many of our customers don’t actually pick a non-profit to have us donate to. That’s always puzzled me – I mean, there is really no catch and no cost to customer, other than the maybe 15 seconds it takes to read the description of the program and make a selection. But still, a lot of people don’t do it.

What’s interesting though is that the level of participation in Better to Give goes up with age. It’s not because older people have more money – again, these donations come out of our pockets, not our customers’. It just seems like older people have more patience to read through a little text. Maybe they have longer attention spans. 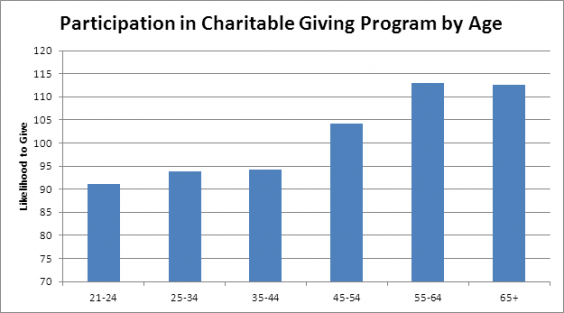 It’s also interesting to look at the geographic breakdown of Better to Give participation. Amongst states, Vermont leads in participation, with customers there being 32% more likely than average to select a non-profit. Given the Vermonters that I know personally, that’s hardly a surprise – they all seem like do-gooder, save-the-world types. On the other side of the coin, New York and New Jersey ranked 49th and 48th in participation amongst states (at 17% and 9% less likely to participate than average, respectively) – I guess being jammed together with other people on the Q train every morning makes you kind of hate society a little bit. (For the curious, North Dakota was dead last in charitable giving, being 31% less likely than average to participate.)

So if you want to receive a gift with a conscience, look to old people. Preferably from Vermont.

6. We get it, New England, you’re better than the rest of us.

Another area that we here at UncommonGoods try to emphasize is eco-friendly product. Again, we’re not perfect here, but we try to offer things that are sustainably produced. And once again, it’s those goody-goodies from up North that tend to lead the pack here. 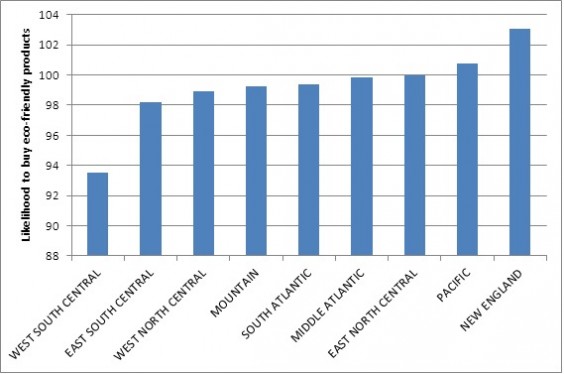 (The regions above are grouped according to census bureau definitions.)

New Englanders are 2.8% more likely than average to buy eco-friendly products. People from the West South Central region – which is Texas, Oklahoma, etc. – were the least likely to buy earth-friendly things, at 6.8% less likely than average. Which reminds me of my favorite quote from this guy on The Simpsons: “In Texas, we got rid of the environment, and everyone was a lot happier.”

Actually, that’s not quite fair. Texas was not on the bottom of the list of eco-friendly states. The bottom five were actually Arizona, Louisiana, Nevada, Oklahoma, and Arkansas. Texas was actually only #40 in eco-friendly purchases – not great, but they are being brought down by their regional neighbors.

And this time around, Vermont wasn’t quite at the top. The top five were actually Alaska, Maine, New Hampshire, Vermont, and Colorado – all outdoorsy-type states, which makes sense. These people care about the environment, probably because their environment is so beautiful.

Generally speaking though, if you want a gift that is good for Mother Earth as well, someone from New England is more likely to get it for you.

7. Generosity is a ten-letter word.

Lastly, perhaps the most surprising thing we found is that there seems to be a correlation between how much someone spends on a gift and how long their last name is. 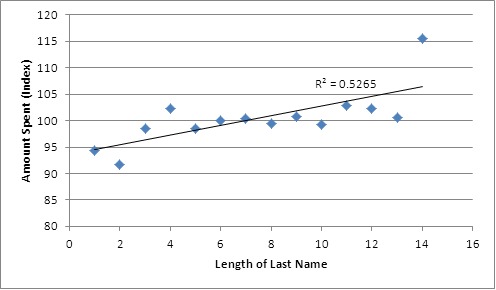 I’m not exactly sure what to make of this. People with very short last names don’t spend much, whereas people with names 14 letters long spend 16% more than average. Maybe they’re more understanding of others, given how often they’ve had to correct people’s pronunciation of their names. Maybe they’re more compassionate because their names were made fun of as children. I’d love to hear other theories about this. Whatever the reason, the fact remains that, with an r-squared of 0.52, it’s not an insignificant correlation.

(And no, unless Malcolm X and U Thant were UncommonGoods customers, I don’t know who these people are who have one-letter last names. And yes, I know that U is a first name, but I’m having trouble coming up with other examples here.)

How to get a great gift

So, taking all this data together, we can form a picture of an ideal gift-giver: a woman with an AOL email address, 55 or older, who lives in California or New England and has a long, complicated last name. Does this sound like anyone you know? Then you’re in luck.

As for me, let’s see: my mom is definitely older than 55, lives on the California border, and we have a sort of complicated last name. I think she cancelled her AOL account in like 2001, but if I can just find her one of those old signup CD-ROMs, I’ll be all set…

Brian Hashemi is the Marketing Director at UncommonGoods

Brian is the Director of Marketing at UncommonGoods.

The Search Is Over