How Our Makers Prepare for the Holidays

As purveyors of cool and unusual gifts for any occasion it is no surprise that the holiday season is UncommonGoods’ busiest time of the year. But, we’re not alone. Research firm eMarketer predicts holiday sales to grow 5.7% this year which will be the biggest jump in sales since 2011. This estimated jump in sales means that online retailers like us have to work even harder this year to make sure we are prepared for the influx of business the season will bring. A busy season for us also means a busy season for the artists and designers we work with. We talked to two of our makers to learn how they prepare their businesses for the holidays and deal with holiday stress. 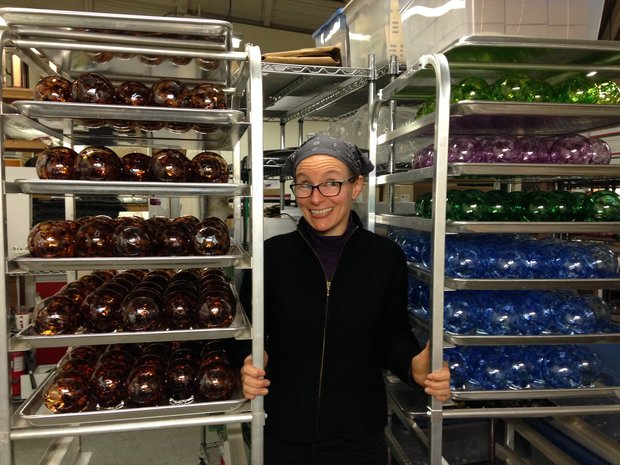 Jill Henrietta Davis in her studio with units of her Birthstone Wishing Balls ready to send out this holiday season.

In both business and life generally, I try to avoid stress by being prepared well in advance of deadlines. We were delighted to start making the Wishing Balls for our holiday purchase order (PO) in July, so that we’d be done early and have plenty time to fulfill additional orders. I deal with stress by making lists, counting things, and playing in whatever supplies might prove helpful in dealing with whatever’s causing the stress. The fourth quarter is a real love/hate time for us in the studio. The increased volume of sales is exciting and great for the ego, but when a new design turns out to be more successful than I could have even imagined and is selling faster than we can make them then the stress gets pretty intense.

We have tally-boards in the shop so everyone can see exactly where we are and what most needs to be done. You get to put a star down when a category is completed. It sounds silly, but that star feels just as good as an adult as it did as a little kid getting back a good paper at school.

I also makes lists…every day and sometimes more than one. My lists alleviate stress by reducing the worry that I’ll forget something, by making concrete the many things that need to be done and by providing tangible proof of progress.  I hardly ever “finish” a list because I typically transfer the last few things to a new list. Every time I cross something off I enjoy the illusion that it is possible to finish the list and that all these tasks are completely manageable.

One last funny thing: Being an uber-recycler, I make many of my lists on the backs of envelopes. Being a little superstitious, I choose envelopes that held checks, or good news, or came from people I like. Probably doesn’t matter, but hey, it can’t hurt! 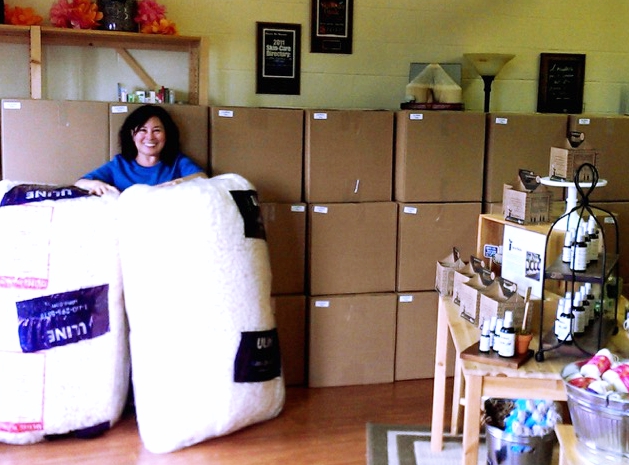 Mary Kearns last year with the first round of holiday season shipping boxes ready to send off to UncommonGoods.

Like many makers, the holiday season is by far my busiest time of year, a concentrated few weeks filled with deadlines for making products, vending at craft shows and fulfilling orders. As you know, making this all work smoothly can be incredibly fun but also incredibly stressful!

There are some things I’ve found help me get through those intense few weeks:

We want to hear from you! What are some things you do to combat holiday stress?

Jill Davis always knew she wanted to be in the business of creativity. Growing up just outside of Boston, MA, she was immediately drawn to the rich arts and culture resources the city had to offer. Visits to the Museum of Fine Arts in her stroller gave way to a summer internship in high school. “In retrospect, I can’t believe the museum staff hired me,” says Jill, “I was the only high school student—all the others were graduate students!” Despite her young age, Jill began working on a project to organize all of the exhibition photos in the museum archive. Her favorite part of the job, however, was exploring the decorative arts and period furniture sections. 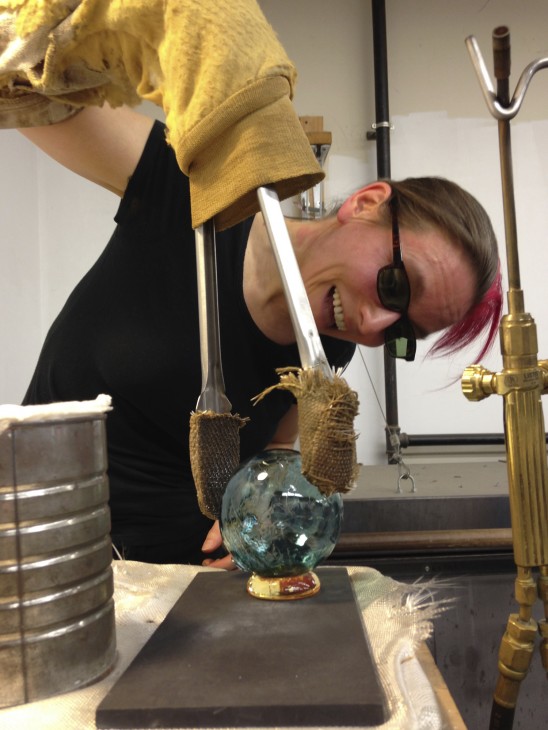 This sparked a lifelong passion in three-dimensional art. Before finding her way to glass, Jill worked with a variety of techniques and materials. From clay and metal to jewelry and paper, Jill eventually settled on fashion, making all of her own clothes. “It was the early ’80s and I wanted to look like I was in a rock and roll band, preferably Van Halen or KISS.” Jill went on to sell those clothes at small stores in Boston and Cambridge before enrolling at the Parsons School of Design in New York City.

During her freshman year studying fashion, Jill realized her clothes were more akin to wearable “sculptures” than they were “fashion.” She knew she wanted to stay at Parsons so she began exploring their different departments. The day she walked into the glass studio and saw molten glass for the first time, her search was over. “Glass is the most challenging and rewarding material I have ever encountered,” says Jill. “You can’t bully it—you are perpetually persuading and coaxing the glass into shape. Even the best living master glass blowers cannot always get the glass to do what they want! It’s this feisty streak that keeps me enchanted.”

Jill began working with the New York Experimental Glass Workshop, spending the next 15 years creating one-of-a-kind fine art sculptures. “It was absolutely great, and I didn’t mean to stop doing it—starting my company was a happy accident,” says Jill. After leaving New York and moving to rural Washington State, Jill realized that Washington was a bit lacking in terms of 24/7 public transportation. She needed a car and she didn’t want to take out a big loan to get one. Thus began her Car Project. “Glassblowers are lucky,” says Jill, “instead of waiting tables, we can blow Christmas ornaments, go set up a card table at a craft fair, and at the end of the day, you can generally count on having sold most of them.” She designed a small collection of affordably priced items and by the end of the year was able to buy a brand new car—in cash. She was also able to start her company, Henrietta Glass. Her innovative Wishing Ball followed shortly. 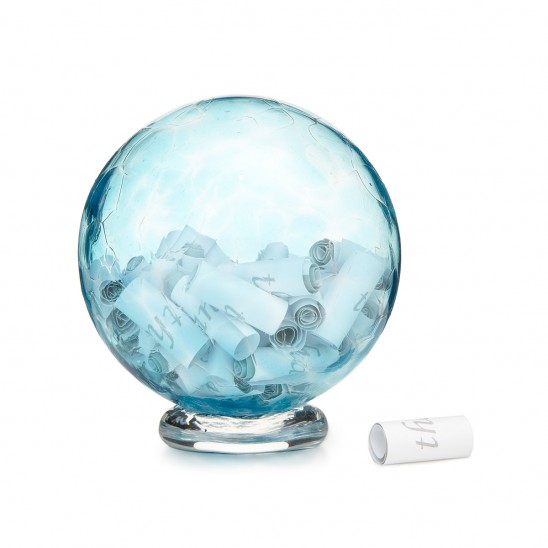 The Wishing Ball was inspired by an NPR story Jill was listening to while she blew some bud vases. A woman told a story about wishing on pennies as a way to heal a broken heart. Realizing that a penny couldn’t buy a wish these days, she began saving her wishes in a jar. Her wish came true at $4.73. Inflation much? This story inspired Jill to create a container for lucky pennies, though a container for pennies ended up amounting to a classic piggybank. Jill realized she was more interested in wishes than pennies, and so began to create a vessel that echoed both crystal balls and snow globes—“two other glass traditions that encourage us to gaze both inward and outward to explore new possibilities.”

The ball itself is hand blown from a blob of 2000 degree molten glass. The clear glass is rolled in bits of copper and cobalt glass called frit in order to produce an ethereal turquoise color. “It’s just like putting sprinkles on ice cream, only screaming hot,” says Jill. The glass is then carefully shaped with a bubble inflated within it. A separate bit of molten glass is affixed to the ball to form the foot. Once assembled, the whole piece slowly cooled in an oven over twelve hours. 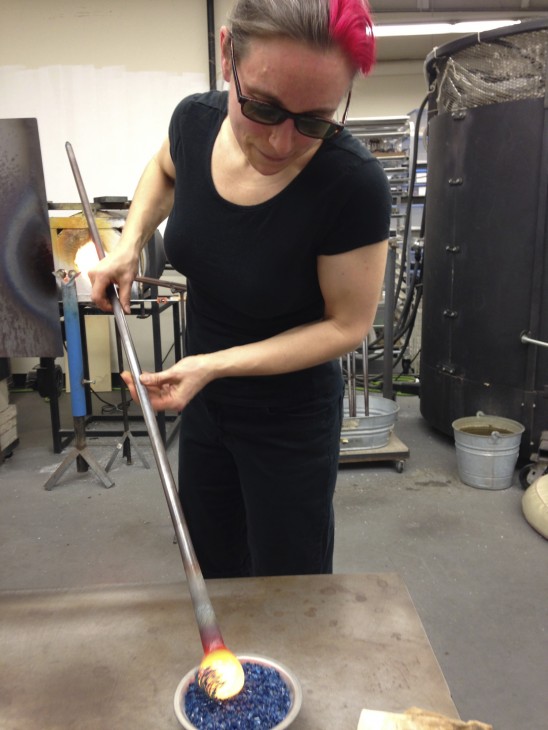 The perfect spot to stow wishes, give thanks, or make a resolution for the New Year, the Wishing Ball presents an inspirational opportunity to put your hopes where you can see them. What’s Jill’s wish for the Wishing Ball? “I’d like people to see their Wishing Ball as a little bit of help or inspiration toward a positive future. Deciding what to write on each piece of paper may be an opportunity to focus and clarify your thoughts.” Her resolution for the New Year? To make sure she keeps doing things that make her uncomfortable, things that challenge her.

“The wonderful American furniture artist Wendell Castle, a hero of mine, has a list of 10 ‘rules’ to live and make art by,” says Jill. “One of those rules is that if you hit the bull’s eye every time, you are standing too close to the target.” This inspiration to constantly push herself lends perfectly to the idea behind the Wishing Ball. Set goals, make a wish, and make changes.

People often ask Jill why the wishes can’t come back out, and her explanation can be summed up with birthday candles. “When you blow out you candles, you don’t tell the wish you made, otherwise it won’t come true.” Says Jill. “But more importantly, memories are always more beautiful than photographs, and the same is true of wishes. When you look at the little slips of paper accumulating in your Wishing Ball, I want you to think about the Big Picture those messages convey. Rereading the notes would be like looking backwards, or trying to step in the same river twice.”