Get Your Brain Buzzing: 8 Uncommon Facts About Honey 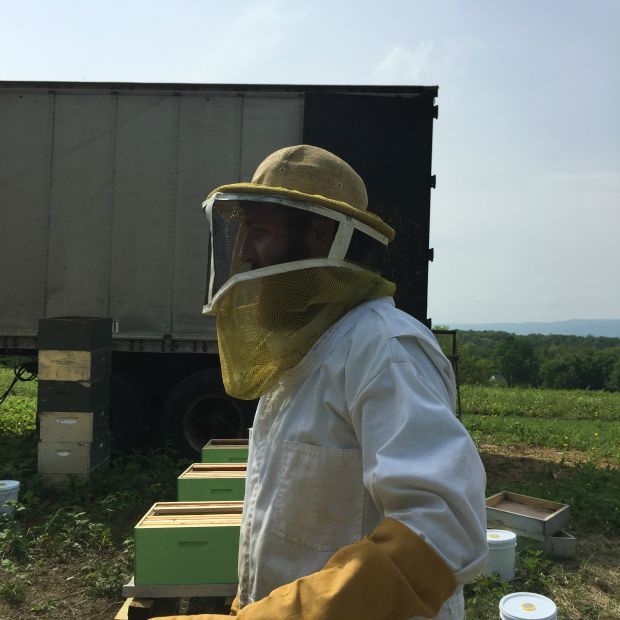 A few weeks ago, we had the opportunity to meet with Casey Elsass from MixedMade and tour his honey infusing and bottling facility, where Bees Knees Spicy Honey is born. Casey is a home gourmand turned condiment entrepreneur who makes Spicy Honey, and it was clear that he had his honey facts down. When I asked him about the odd looking organic debris he had to skim from the top of a massive, 60 lb. bucket of honey, he told me — “that’s pollen.” 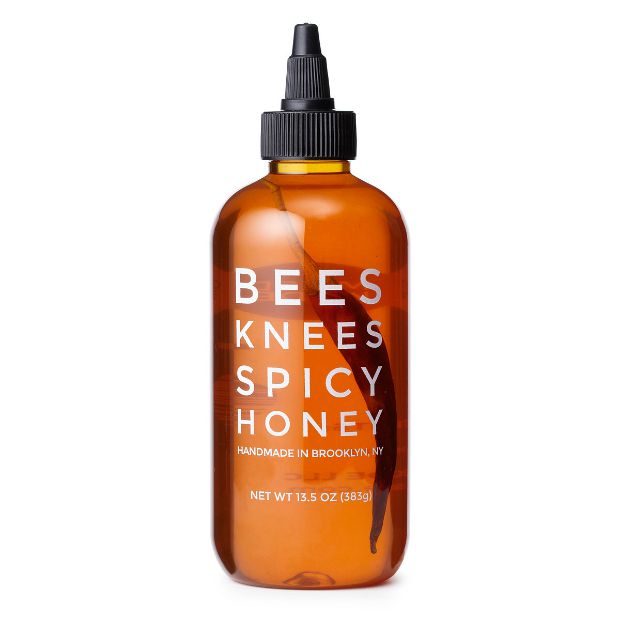 At this point, I chimed in something about how eating local honey is supposed to be good at alleviating allergies, since it can contain some local pollen — but Casey’s “ehhhh, I dunno about that. I think that’s just a myth.” left me second-guessing. When I did my research, I confirmed that this was nothing more than a bowl of Honey-Nut Lies.  Honey is actually made from nectar, not pollen, and flowers aren’t the source of allergy-inducing pollen anyways. Don’t believe everything you read on the internet…

To make up for that blunder, we’ve put together a few of our favorite true honey facts sure to have any honey obsessed foodie buzzing. 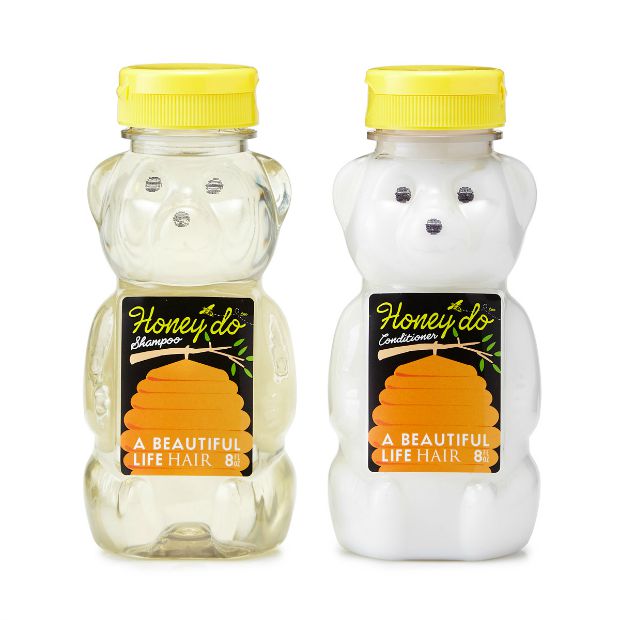 Aside from classic ketchup and mustard bottles, few foods can claim to be as visually iconic in the landscape of the post-war American supermarket as the honey bear bottle. The ursine design was first used in 1957 by the Dutch Gold Honey Company; future president of the company Ralph Gamber allegedly remarked: “a bear likes honey, why not a bear of honey?” Classic. Since plastic was more expensive to produce back then, it was somewhat of a business gamble – but it clearly paid off. America’s favorite bear even has a name too – “Nugget.” 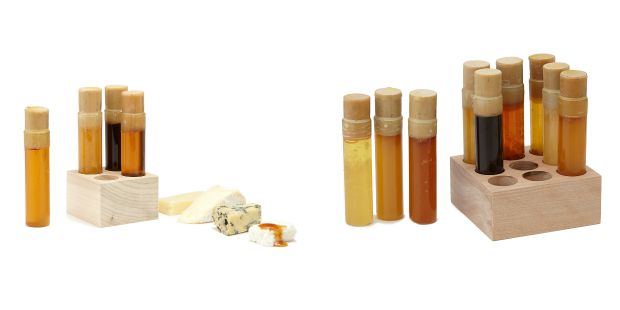 Today, we drizzle honey on a lot of things – toast, cheese, you name it. How about a dead emperor? I doubt that would fly now – would probably be pretty chalky – but the use of honey in burials used to be all the rage. Notably, Alexander the Great is rumored to have been buried in a golden coffin filled with white honey. That sounds pretty excessive, but he had his reasons; as a prized treat, honey was understandably associated with special occasions, rituals, and distinguished persons way back in the way back. Honey also symbolized death in many ancient cultures, presumably in reference to the sweet sustenance that honey would provide to the soul. Plus, honey is the only organic food that will never expire, and thus a likely preservative. I wonder how good ol’ Alex is holding up after all these years?

Where “Nugget” has his charm, the Varietal Honey Flight brings back the elegance of ancient honey, minus all the morbid death stuff. 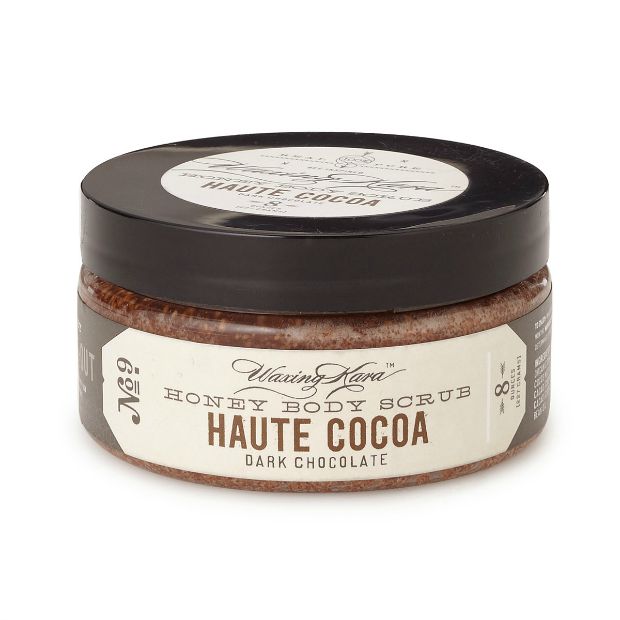 Using honey as a beauty and grooming product may be part of the all-natural beauty industry trend, but honey has been used to clean wounds since ancient times due to it’s antimicrobial properties and viscous stickiness.  Today, the US Food and Drug Administration actually recommends a special kind of honey – Manuka honey – for this purpose, since it has the added effect of releasing hydrogen peroxide. Plus, it’ll help the band-aid stay on better. 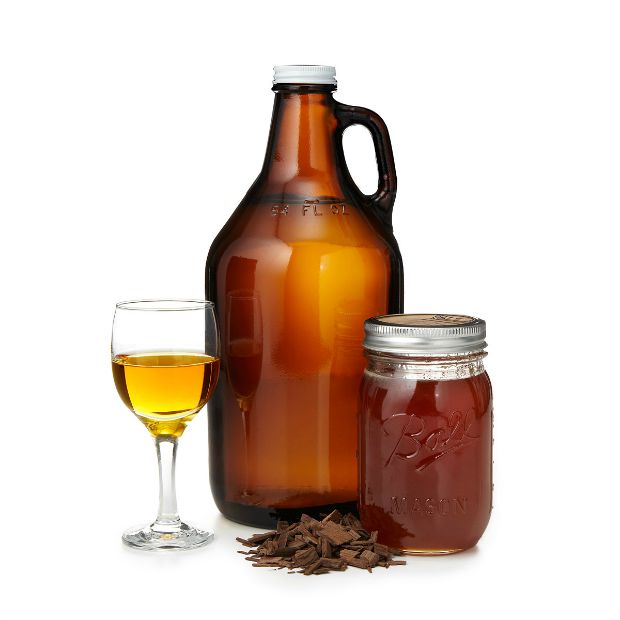 4.) The Honeymoon Isn’t Over

While we’re on the sticky subject, ever wonder where the term “honeymoon” comes from? The term dates back to the Medieval European traditions of a newly married couple drinking honey wine (mead) for a full cycle of the moon after their wedding. Mead was thought to be an aphrodisiac – you get the picture. While “mead” might conjure up imagery of Medieval jousting lists and downy, dirty men slurping from tankards, it’s actually somewhat of a universal beverage, surfacing in cultures from Ancient Greece to Sub-Saharan Africa to Imperial China, and likely predating both wine and beer as the first alcoholic beverage due to its tendency to arise naturally under the right conditions. 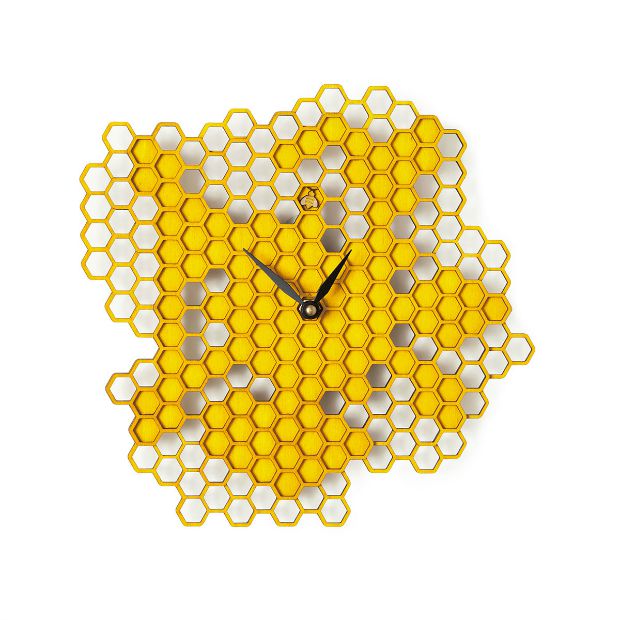 Not only are honeybees industrious – they’re highly advanced communicators, central to which is their excellent perception of time. Biologists have determined that bees relay the location of food sources through a kind of dance code – first cracked by Karl Ritter von Frisch in 1973 – detailing the direction and distance of the flower relative to the sun’s position, by which they are even able to account for the movement of the sun when they tell their tale. It’s almost like a crude form of vector calculus mixed with interpretive dance. 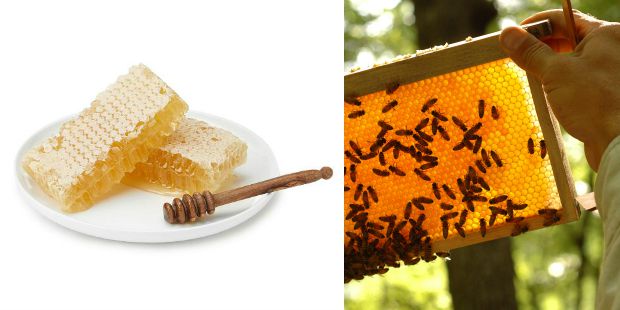 The fastidious and colonial regularity of the honeybee is showcased perfectly by the precise uniformity of honeycomb… but why hexagons? Why not another shape? It’s an age-old question, first posed in 36 BC by the Roman scholar Marcus Terentius Varro. Since wax is resource intensive for honey bees – they need to eat about 8 oz. of honey to make one oz. of wax – it makes sense that they wouldn’t use a shape like a circle, which would create gaps between cells that would need patching with wax. But why not a triangle or square then? It turns out that a hexagonal structure is the most compact and thus uses the least wax – proved only recently in 1999 by mathematician Thomas Hales. The bees knew it all along… 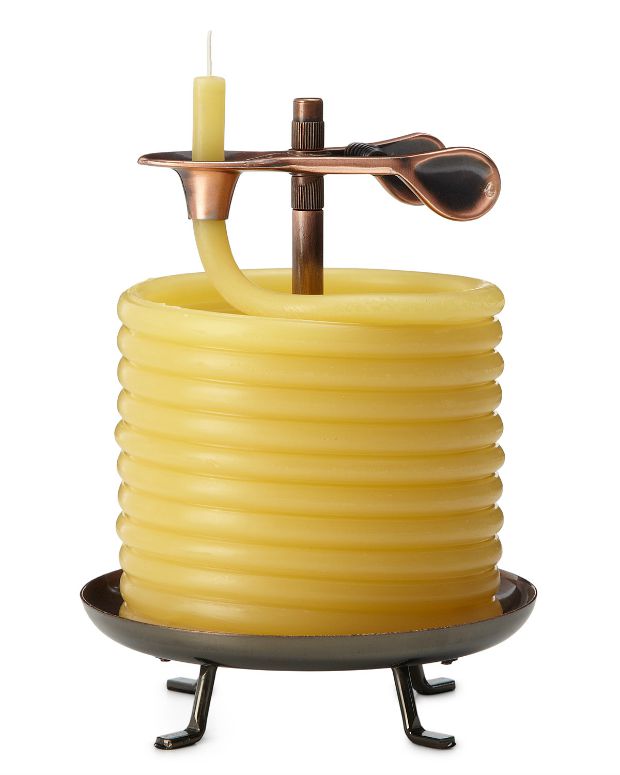 Bees secrete beeswax from special abdominal epidermal glands. Long coveted by humans for use in candles, beeswax has actually been used as a form of currency throughout history! In 181, when the Romans defeated the neighboring Corsicans, they imposed a hefty tax of 100,000 pounds of beeswax on the islanders. Later, in 4 AD, the Roman Catholic Church decreed that only beeswax candles may be used in church rites. The decree still stands today, but church candles are usually only 5 – 50% pure. 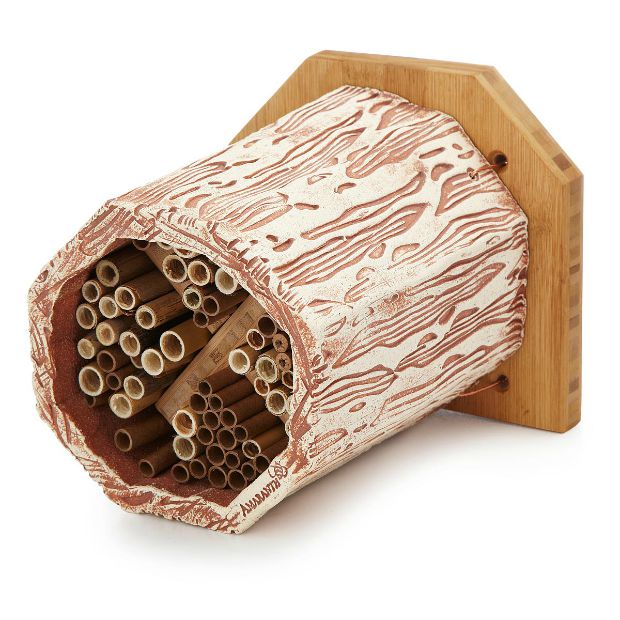 Ecological and agricultural issues surrounding domesticated honeybees have gotten a lot of media attention in the past few years. Honeybee populations seem to be vulnerable where they weren’t especially so before, with die-off rates as high as almost 50% in 2013 due to a mysterious phenomenon called colony collapse disorder (CCD). The causes of CCD are still under investigation, but scientists speculate that the prevalence of crop monocultures – which reduce the variety of a colony’s diet – and increased use of pesticides are at least partially to blame. Bees play an integral part in human agriculture as pollinators, and there’s never been a better time to give bees a home.

Inside the Maker’s Studio With Casey Elsass 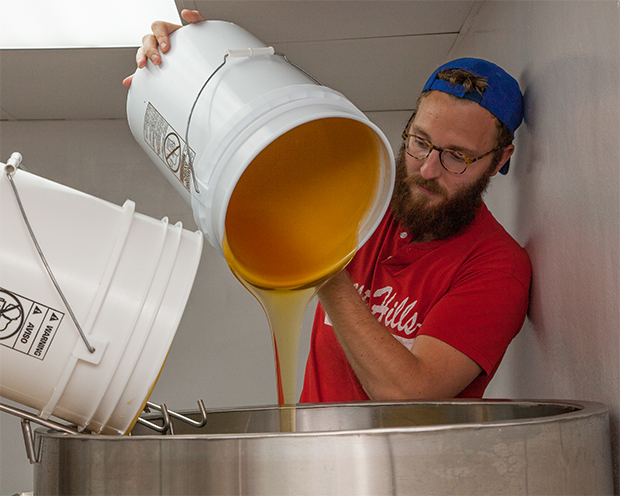 A few weeks ago, I had the pleasure of visiting Casey Elsass at his workspace in the Bushwick neighborhood of Brooklyn, where Casey and his employees prepare and bottle Bees Knees Spicy Honey. The operation is located in a food preparation complex featuring local culinary favorites and well-known names like Roberta’s Pizza and McClure’s pickles, so it was clear that Casey’s popularly acclaimed (dare I say alternative?) condiment label – MixedMade – was in the right league. As Casey welcomed us to his facility, my eyes were immediately drawn to two things: 1) his awesome beard and 2) the tremendous stock of honey in the room, and the tremendously large vat that in the next few minutes that honey would accumulate in. It was a beautiful and captivating idea, a vessel of liquid gold large enough to bathe in. But I don’t think the FDA would consider that an OK thing to do. 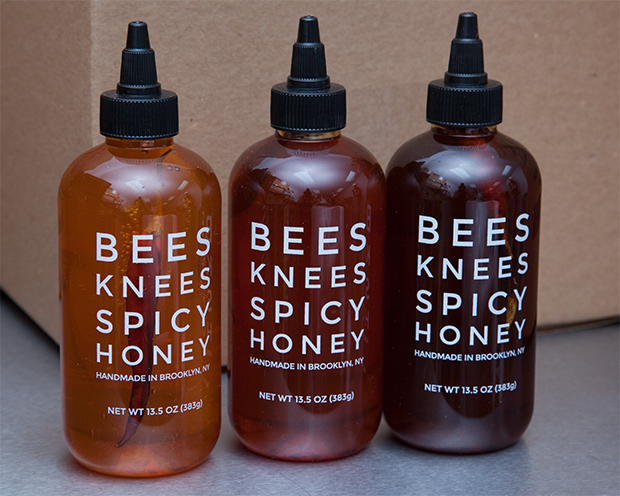 When the time came for Casey to crack the seal on one of the massive, 60 lb buckets of honey, a sweet and mildly floral honey smell filled the air. I wondered how he holds back – what’s stopping him from sticking his face in that bucket Winnie the Pooh style? As he prepared to dump the bucket into the huge, silver tank where the contents would get infused with chili pepper goodness, he filled me in on his story: “I’ve always been a foodie – that’s why I started this – but I was actually making my own hot sauce way before we decided to do honey. MixedMade started as our experiment to see if we could launch a condiment in 30 days, but hot sauce is a really crowded market. We kept the hot, lost the sauce, and Spicy Honey was born.” 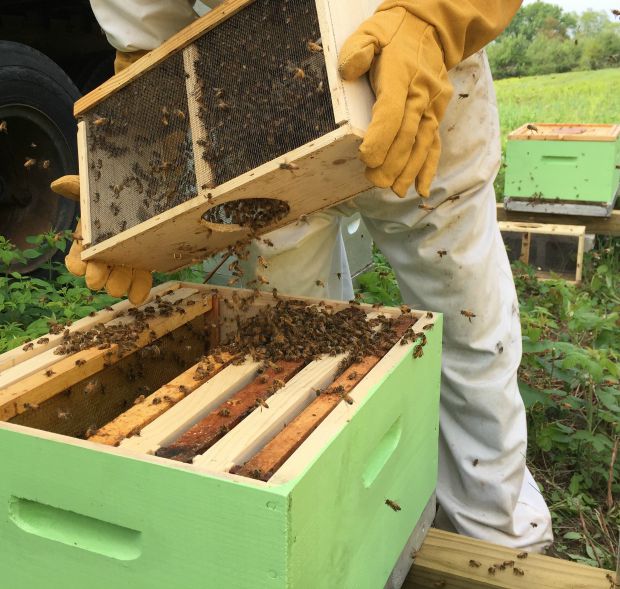 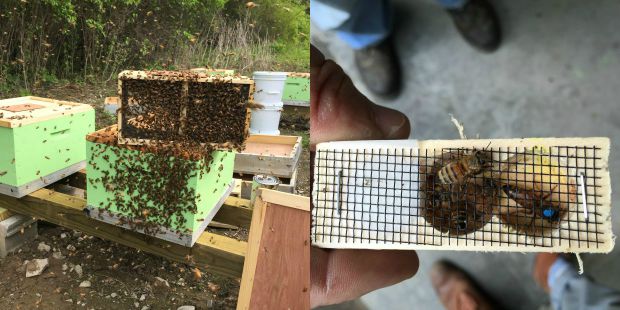 But – it was clear that Casey had acquired a new-found knowledge and appreciation of honey. He sources all of his honey from a family-owned and operated farm upstate a ways in the Hudson Valley, and he frequents the farm to help out with harvests and build hives. “We actually built 30 new beehives exclusive to the company on my last visit – we’re lucky to have such a close relationship with them.”

Read on to learn more about the process behind Spicy Honey – from the hive to your home – Casey’s worst honey-related accident of all time, and what’s next for MixedMade. 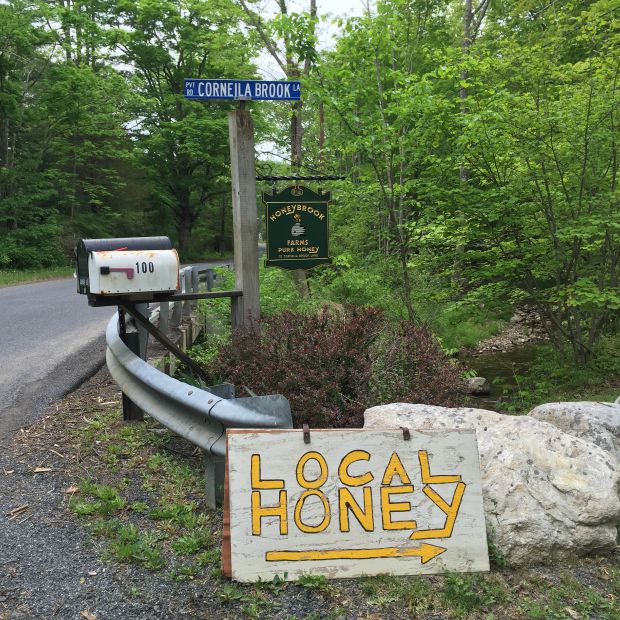 END_OF_DOCUMENT_TOKEN_TO_BE_REPLACED

Yes, Mom. There is honey in my hair. 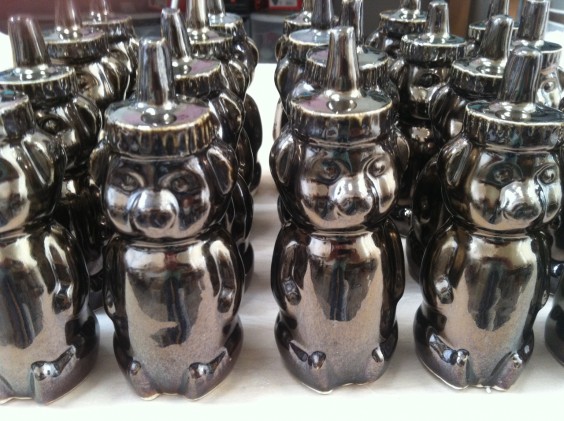 For years, Los Angeles designer Lesley Anton used her empty honey bear bottle to hold dish soap at her kitchen sink. Her clever, eco-friendly idea led to the creation of cast porcelain Honey Bears, paying homage to what Lesley describes as an “iconic form that embodies the American kitchen.”

I was so inspired by Lesley’s dish soap idea that I looked up a few more uncommon uses for the sweet, sticky substance. I am a honey enthusiast. I take on the philosophy of Buddy the Elf: smearing it on toast, on pancakes, in tea, on apples, on peanut butter sandwiches, in lemonade, in cupcake recipes, on a spoon, through a straw. I thought it might be nice to incorporate honey into other domestic situations. Here are nine alternate uses for the iconic honey bear:

Skin moisturizer Mixed with eggs and flour, honey can cure dry winter skin. Add sugar and you have a cake!

Antiseptic When the glucose in honey is diluted in water or body fluids, hydrogen peroxide is gradually released. So dabbing some honey on a wound will not only keep it clean, but it will also prevent a bandage from sticking to the sore.

Energy booster When glucose is absorbed by the brain it reduces fatigue, so add some honey to water to create a quick and natural energy drink after a long night out.

Burn relief Honey has been known to sooth the sting in sunburn and other minor burns. Mix honey with petroleum jelly to create a cooling post-beach lip balm.

Hangover cure In case you weren’t impressed enough with the amazing glucose in honey, it also speeds the metabolism of alcohol, making a hangover pass more quickly.

Hair conditioner Honey can clear buildup without stripping hair of its natural oils. It will also form a protective layer on hair preventing damage from styling products and other elements. Adding honey to some olive oil and buttermilk will make it easier to use.

Antifreeze Honey will not freeze but also has a considerably high boiling point so it will not evaporate, making it beneficial as antifreeze in the winter as well as in the summer. Some brands of antifreeze also choose to add honey as a thickening agent to coat the pipes of a radiator.

Golf balls Inside every golf ball is a smaller rubber ball filled with liquid. Up until the 1960s, that liquid was honey but has recently been replaced with a synthetic liquid with similar properties.

Who knew there were so many other uses for my favorite condiment? I was hoping it could be used to clean the drool off my keyboard. Will you be trying any of these natural home remedies?