Fall arrives. Leaves change. The air cools. It feels nice to sit in the sun and soak up the warmth. While some lament the loss of summer, others embrace the crisp autumn air. Many of our blogging friends enjoy kicking up leaves, stoking the fire, settling down with afternoon cocoa and a classic novel. More than a few are energized, developing recipes, aging whiskey, baking, stewing, and prepping for the holidays.

Nothing warms us more than seeing our artists’ wares featured in a great blog post. 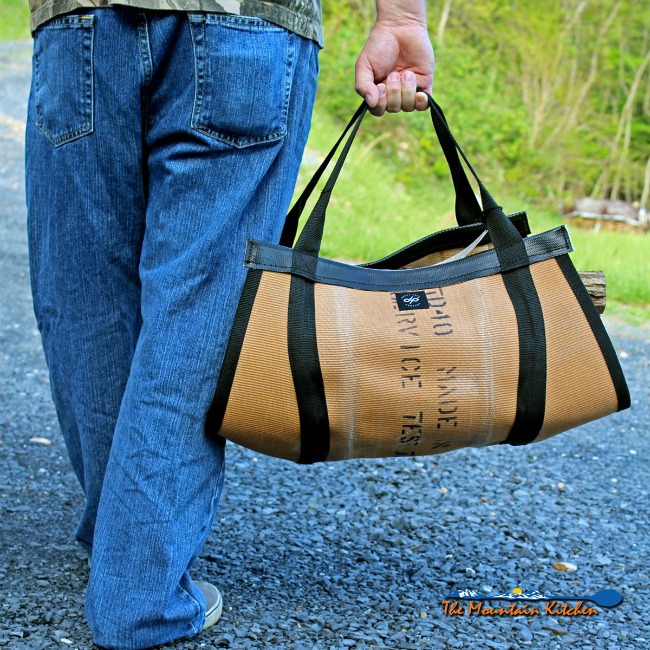 As the weather cools high up in the Blue Ridge Mountains of Virginia, bloggers Debbie and Dave at The Mountain Kitchen use our Reclaimed Fire Hose Log Carrier to haul firewood to their rustic mountain retreat.

END_OF_DOCUMENT_TOKEN_TO_BE_REPLACED

A hot bowl of homemade porridge for breakfast; a leisurely bike ride past warm, welcoming shops; a fresh pot of tea shared with an old friend; the comforting glow of candles—lots of candles. All of these things are hallmarks of hygge, an essential ingredient of life in Denmark. Though it has no tidy translation in English, some etymologists think it’s a distant Danish cousin of the word hug, an association encouraged by the cozy, comforting essence of both words. It may be hard for English speakers to pronounce (try “hyoo-gah”), but it’s not so hard to attain. The new Little Book of Hygge offers pointers on the Danish way to live well, while Morley College in London has started teaching hygge along with their Danish language instruction. But hygge isn’t just about warm, fuzzy feelings—it’s central to Denmark’s status as the happiest country in the world. That’s right, Denmark is consistently crowned the #1 country for happiness, according to the UN’s official World Happiness Report. And if it’s not too much of an oxymoron, the Danes are serious about their happiness. Just ask the staff of the Happiness Research Institute of Copenhagen. With chestnuts-roasting-on-an-open-fire season just around the corner, we offer this cozy collection of uncommon goods that can help you mix more hygge into your home and lifestyle, whether you live in Copenhagen or Corpus Christi. 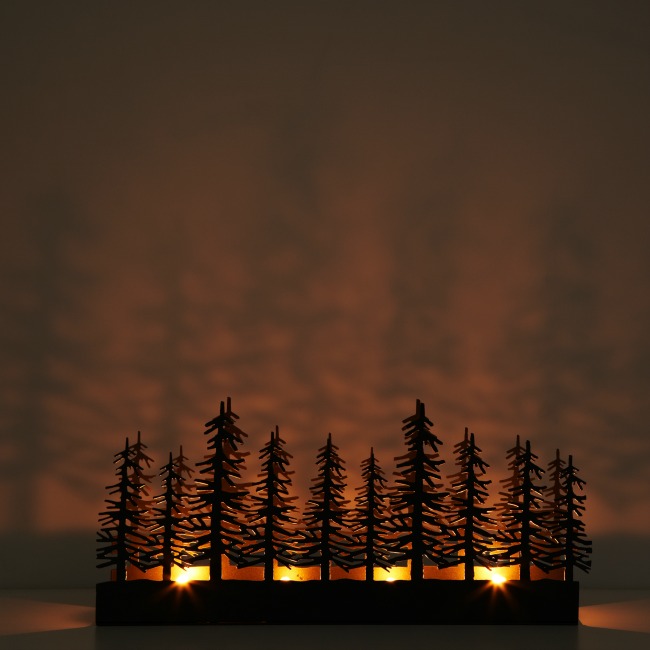 You might say that hygge is part of the Scandinavian landscape: serene stands of fir and birch, mossy forest floors dotted with red-capped mushrooms that might just be gnomes out of the corner of your eye…Our Nordic Tea Light Trough lends a soothing alpine glow to your decor.

END_OF_DOCUMENT_TOKEN_TO_BE_REPLACED 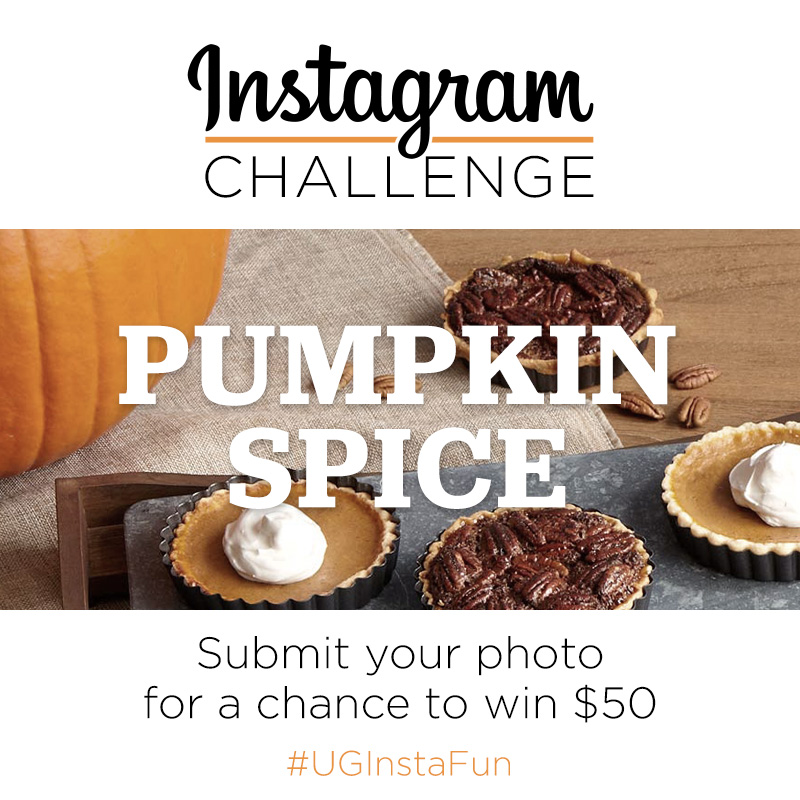 The next Instagram Challenge theme is PUMPKIN SPICE! As soon as October hits, it seems that pumpkin takes over every aisle of the grocery store. From the moment we drink our morning coffee, to a sweet treat at the end of the day, this orange delight is becoming as ubiquitous as chocolate. As a result, we’re now craving things that we never imagined could be spiced with pumpkin (and we really like it). We want to see what creative pumpkin treats you’re enjoying this season. While sharing your delicious shots, be sure to use the hashtag #UGInstaFun to be in the running for a $50 gift card. Visit here to see the entries we’ve received so far.

Congratulations to @hellopopko for winning the “So Long, Summer!” Instagram Challenge with this beautiful shot of summer fireworks. 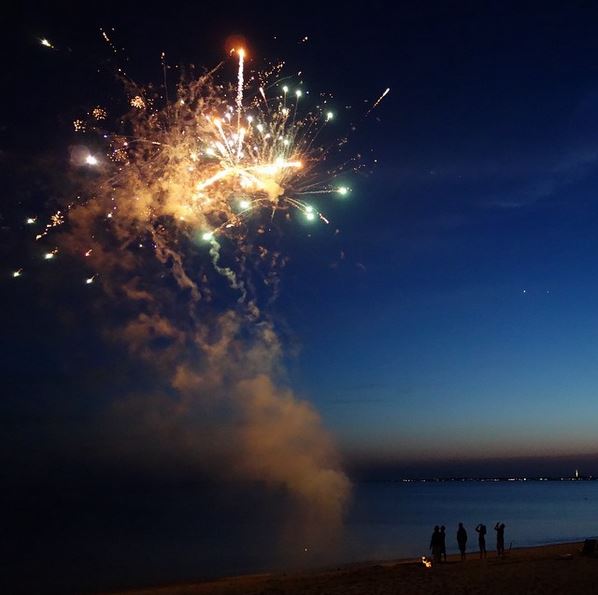 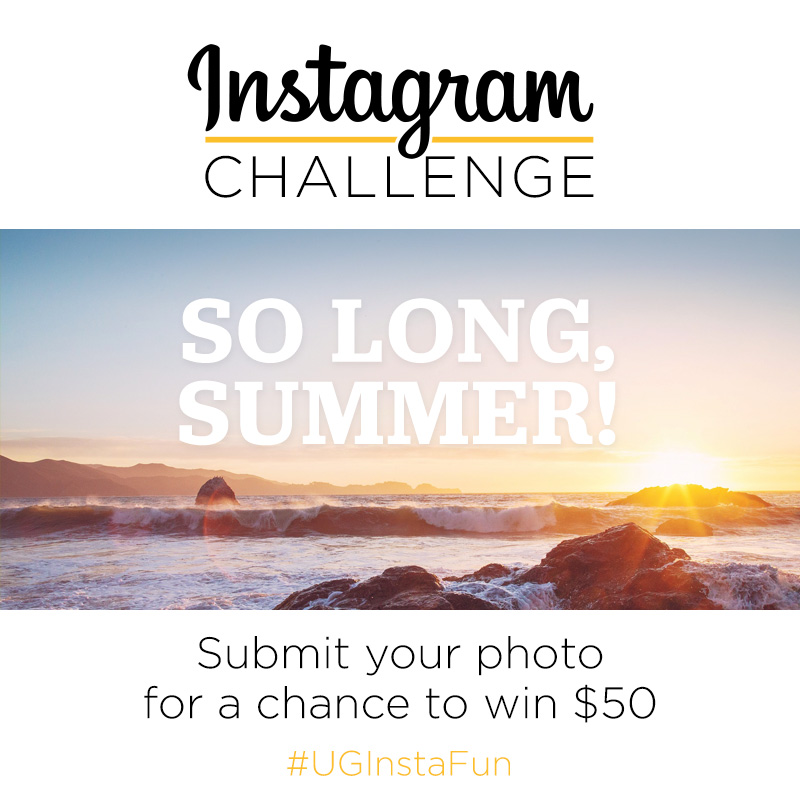 The next Instagram Challenge theme is SO LONG, SUMMER! Fall officially starts September 23, which means we have about one week to soak up the last bits of the most carefree season. Though we were ready to trade in the sticky heat by the time Labor Day rolled around, we know that we’ll be longing for ripe tomatoes and sun-kissed skin by the first snowfall. Join us in giving summer a proper goodbye by sharing your favorite moments of the season! While sharing your sunny shots, be sure to use the hashtag #UGInstaFun to be in the running for a $50 gift card. Visit here to see the entries we’ve received so far.

Have a great rest of the summer!

Congratulations to @alexpaulettedesign for winning our Back to School Instagram Challenge with this beautiful portrait of her art supplies for grad school. 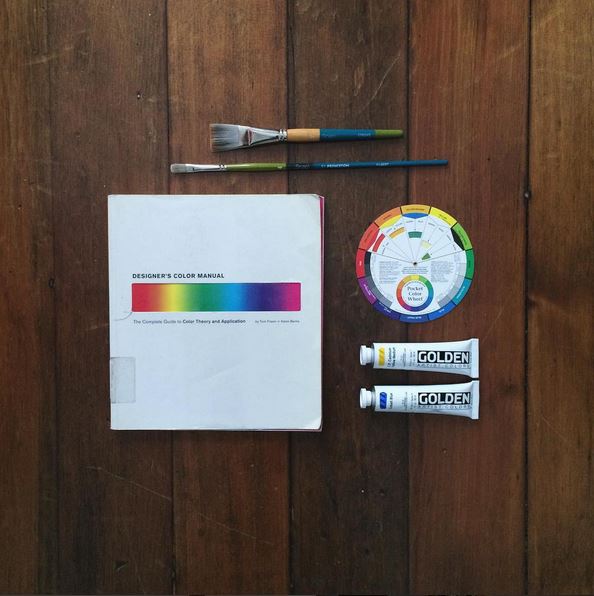 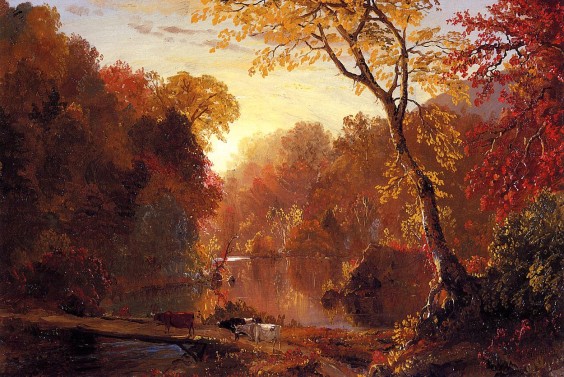 Due to an injury, I wasn’t able to go on a leaf-peeping trip this year, and I consoled myself by collecting autumnal art on Pinterest. It wasn’t the same, of course, but I found it hard to be unhappy while perched upon a comfy chair with a cat and a laptop and perusing fantastic art, like the great Hudson River School painter Frederic Edwin Church‘s “Autumn in North America,” above. 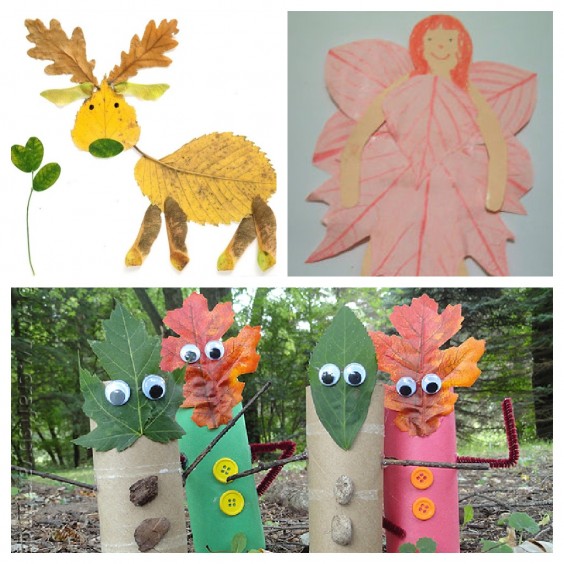 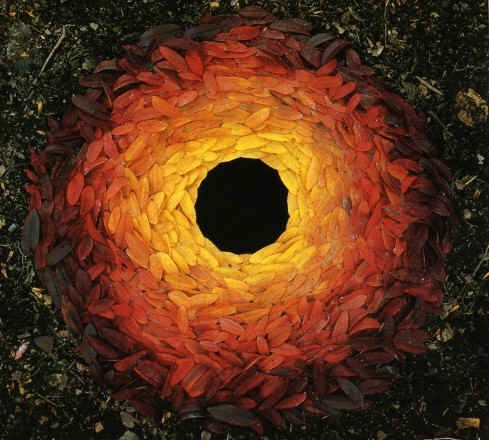 As I surfed, “curated” and pinned, several major themes of autumn art emerged; all so obvious that a child could guess them.  And so the first theme, “Made of Leaves,” includes some children’s artsy/craftsy projects (see sources at the bottom of the page), along with one by British environmental artist Andy Goldsworthy, “Rowan Leaves with Hole,” made in the Yorkshire Sculpture Park in West Bretton, England in 1987. 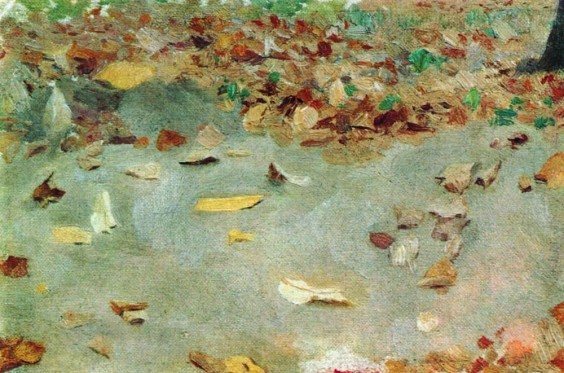 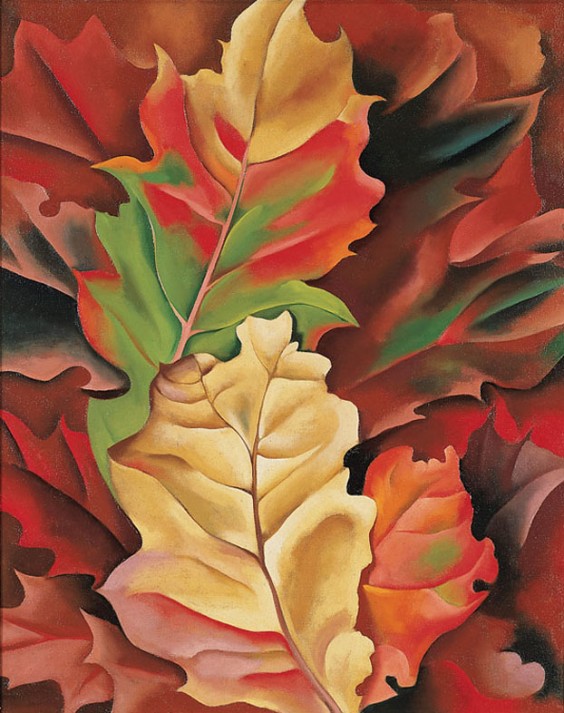 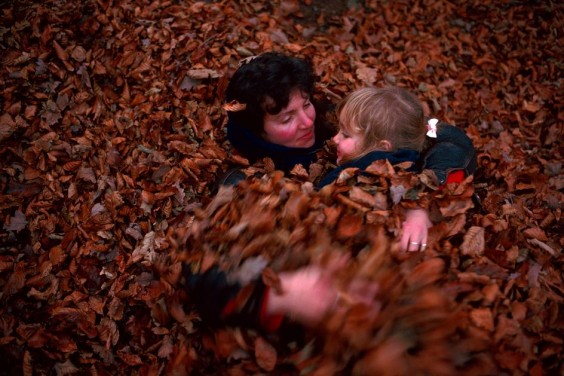 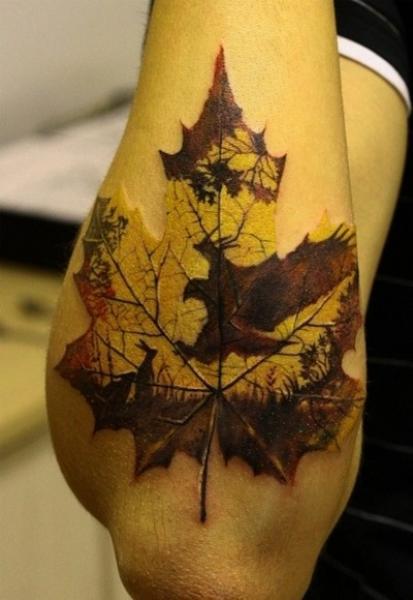 “Art of, but not made of, leaves” is my clunky title for Theme Two.  Russian painter Isaac Levitan‘s 1879 “Autumn Leaves,” Georgia O’Keeffe‘s 1924 “Autumn Leaves, Lake George, N.Y.,” British photographer Stuart Franklin‘s 1986 “Somerset county, Quantock Hills,” and this incredible leaf tattoo with silhouettes of a hawk diving after some rabbits that are hiding among the leaf veins, each satisfied several leaves’ worth of my forest of foliage cravings. 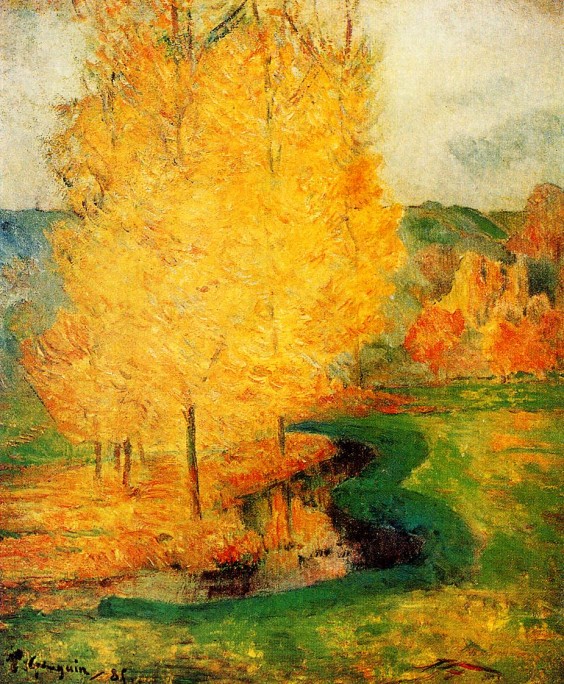 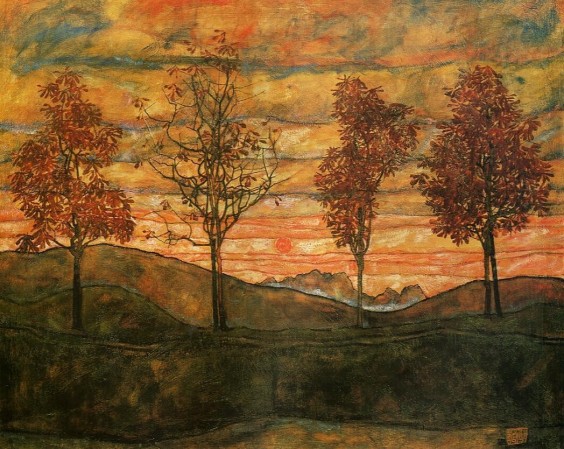 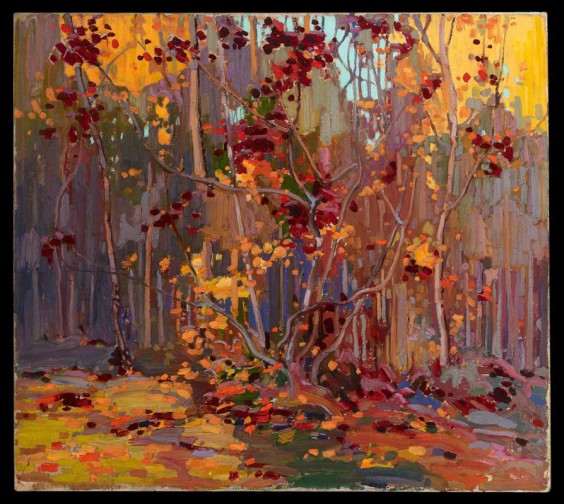 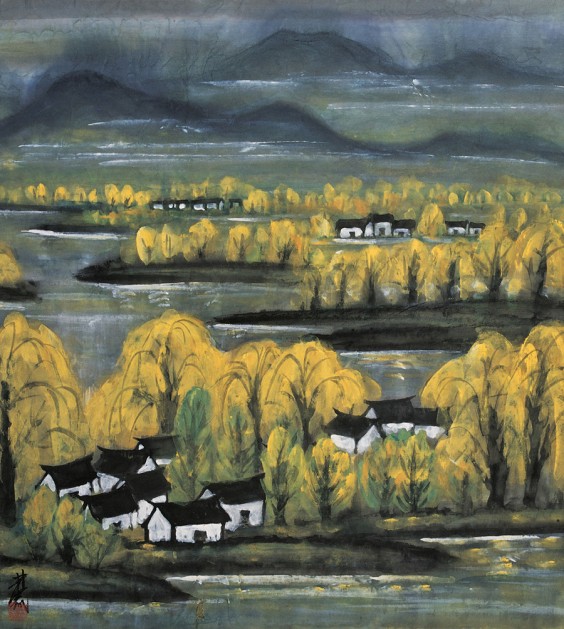 A Frenchman, an Austrian, a Canadian and a Chinese walk into a bar. “What’s shakin’?” asks the bartender. The Frenchman, Paul Gauguin (1885’s “By the Stream, Autumn“), the Austrian, Egon Schiele (1917’s “Four Trees“), the Canadian, Tom Thomsen (1915’s “Maple Saplings, October“) and the Chinese, Lin Fengmian (“Autumn in Jiangnan“; I couldn’t find a date but he lived from 1900 to 1991)  all answer, “The autumn leaves from the trees!”, but in paintings, not words. Which sums up Autumn Art Theme Three, “Trees,” and probably ends my writing career here and now. 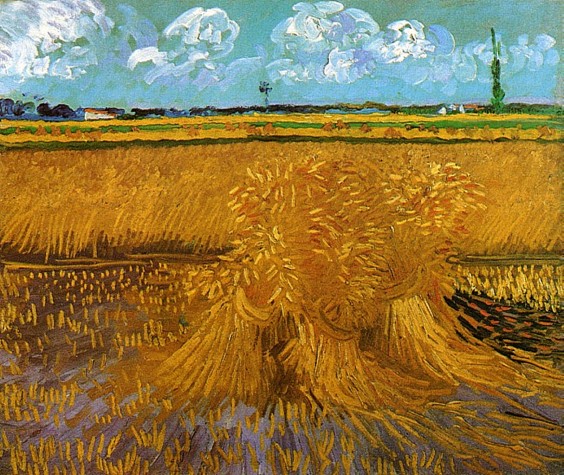 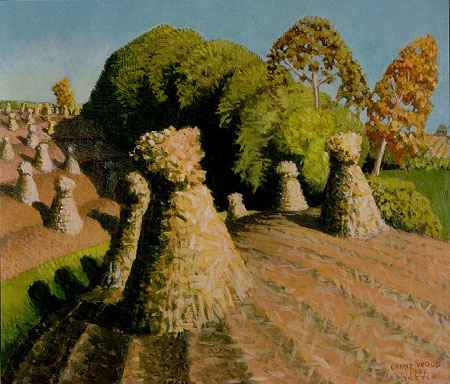 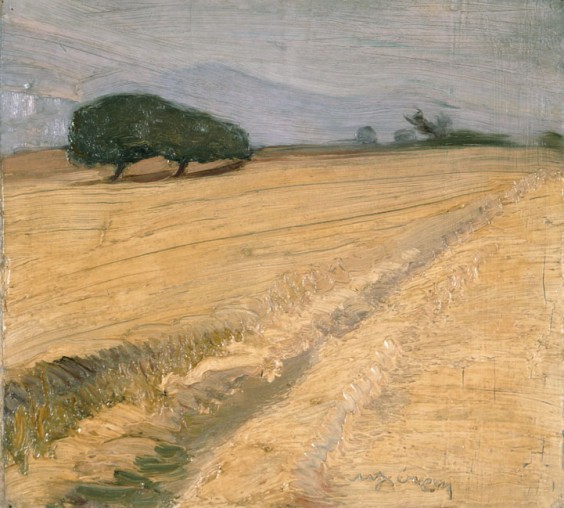 Autumn Art Theme Four, “Golden Fields of Ripe Grain,” could easily have been subtitled “The Vincent Van Gogh Subsection,” because the man painted wheat field (“Wheat Fields with Sheaves, 1888) after wheat field (“Wheat Fields with Auvers in the Background,” 1890) , each more glorious than the next. But for contrast, I threw in Grant Wood’s slightly cartoonish “Iowa Cornfield” (1941) and Greek painter Nicolaos Lytras‘s more atmospheric “Fields with Haystacks” (I couldn’t find a date for it, but Lytras lived from 1832 to 1904). I like the way you can see the light reflecting off this painting; I’m so used to looking at computer images all day that it’s nice to be reminded of actual paint. 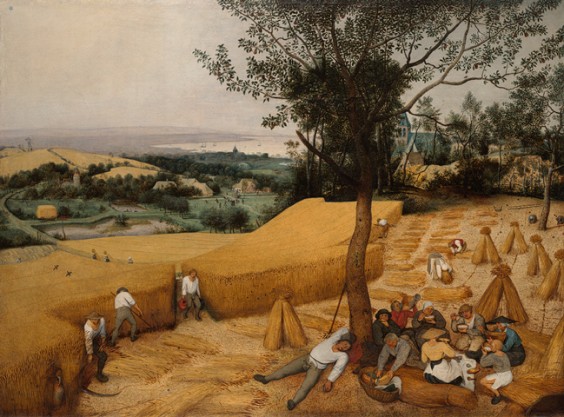 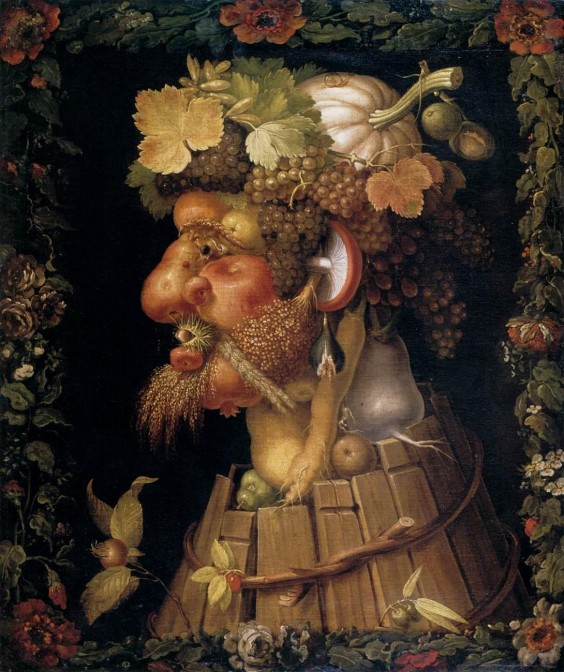 Autumn Art Theme Five is “The Glory and the Power(less) of the Harvest.” Pieter Bruegel the Elder‘s 1565 “The Harvesters” makes the whole wheat scything thing look pretty chill. Giuseppe Arcimboldo‘s 1573 “Autumn,” a comic take on the season’s vegetable riches, is a good vibes-er as well. But Jean-François Millet‘s sad 1857 “The Gleaners,” one of the most famous paintings of all time, shows poor women gathering what’s left on the ground after the more fortunate have finished their harvest. Gleaning is still practiced today (though not usually while wearing long skirts), and there are non-agricultural, year-round versions of gleaning as well, which you’ve probably heard referred to as “dumpster-diving.” 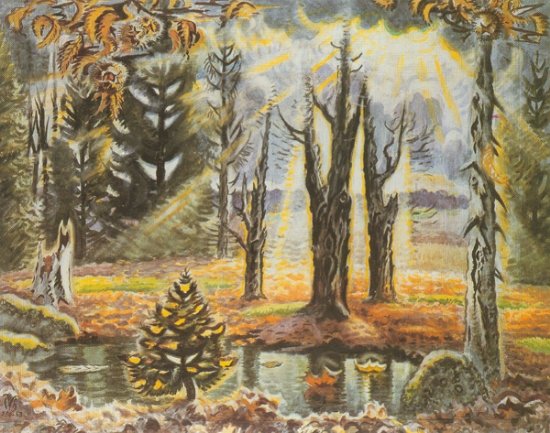 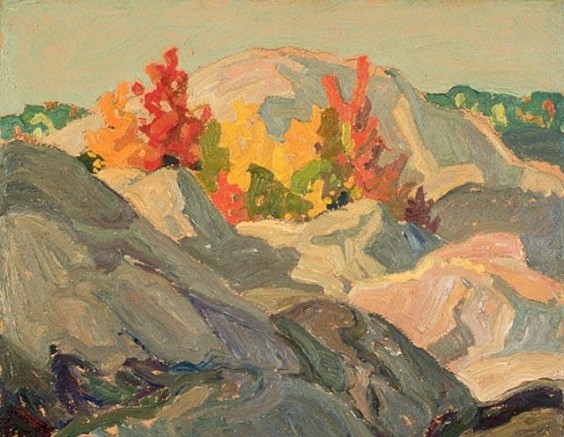 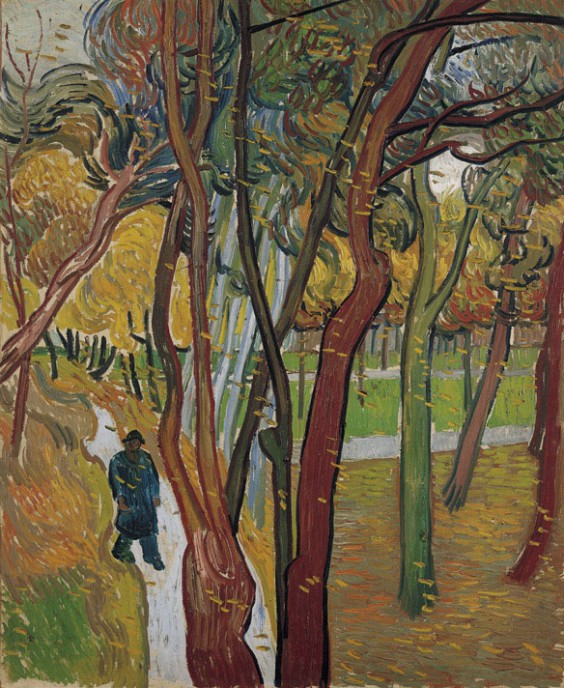 Autumn Art Theme Six, “Vistas,” may look a lot like Theme Three, “Trees,” but I swear it’s different. These paintings have bigger scenes. More of a view. Are not 100% tree-predominant. There are ponds (Charles Burchfield‘s 1938 “October in the Woods“), mountains (Canadian Franklin Carmichael‘s 1920 “Autumn Foliage against Grey Rock“), and people (Van Gogh’s 1889 “The Garden of Saint Paul’s Hospital (‘The Fall of the Leaves’).” Totally more vista-y than Theme Three! 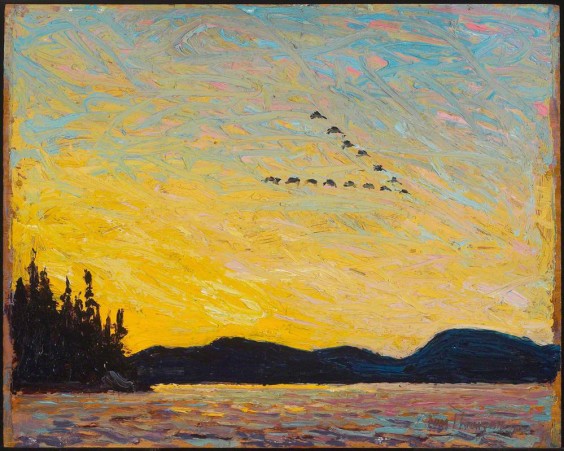 I saved my favorite vista for last. This one reminds me of the northern lakes in the state where I (and Cassie) grew up, Minnesota. “Hasta la vista!” say the geese in Tom Thomson’s 1915 “Round Lake, Mud Bay,” and now I must say “Ciao” to this blog post as well. Quack, quack!  (You don’t have to say good-bye to beautiful autumn artworks, though. There are tons more in my Pinterest collection.) 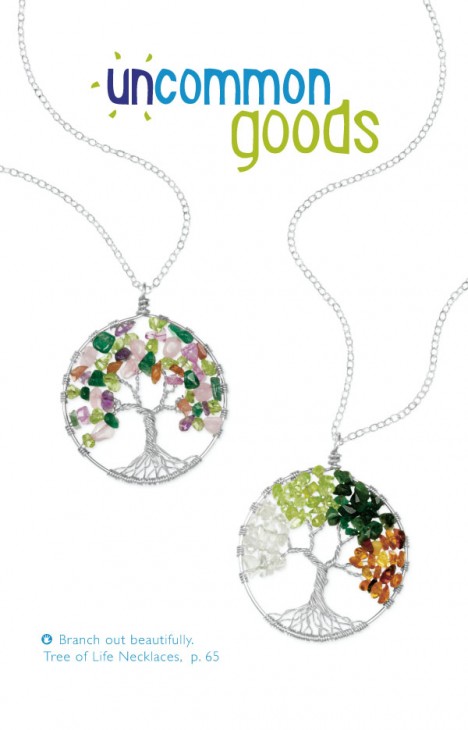 It’s hard to think about fall in the  middle of a heat wave…but I must admit it was nice to see our latest fall catalog – chock full of lots of fun new things for the end of summer and start of autumn. Plus, doing  a little online shopping with the AC blasting sure beats heading out in the heat!

Check it out: UncommonGoods online catalog.