Did your parents encourage your artistic leanings?

Yes, my father used to help me with my work. He was really interested in it–especially when he was retired, he was visiting me every week in my studio! I had a very strong relationship with him.

What are your sources of inspiration?

My main sources of inspiration are movement and forces of nature. My objective is to make movement with no electricity, and I’ve had this obsession since 1987…to make something living as long as possible, to approach perpetual movement. 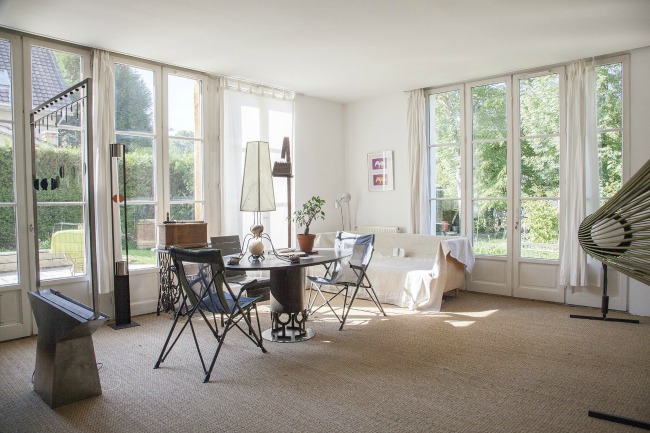 A peek inside Philippe’s home, featuring some of his own creations

How does it work?

It works due to a physical phenomenon called “capillary action,” the same that allows insects to walk on water.

What have been some of your favorite reactions to your work?

My favorite reaction is when I see them realizing that they will give proof of their love to someone, and when they tell me which friend or lover will receive the gift.

I think they also love when they leave something and it keeps moving by itself! They imagine the bottle in their living room, showing it to their visitors. It’s like a cat, it moves by itself, it’s silent. Once in a while you have to turn it over to get it going again, it’s simple. 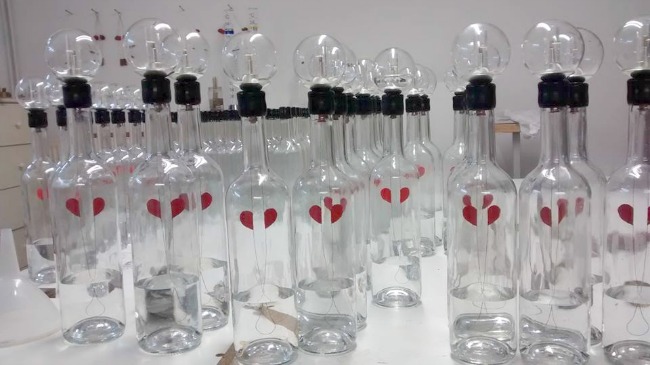 How did you dream up the heart bottle?

When I was completing my military service, and was surprised that we weren’t allowed to “march” on the bridges because it could destroy the bridge, specifically because of the rhythm of the steps, it got me thinking. From then on, I was seeking the phenomenon of capillary action everywhere, in pubs/bars for instance…I made myself a promise to express nature with simple forms, in a poetic way, and with a rhythmic flow.

(If you happen to speak French, you’ll understand Philippe above. But watch either way to see the bottle assembled and in action!)

Whose heart(s) were you thinking of when you made it?

It’s been a very long process. My research began as a student of Beaux ARTS Paris in 1987. In 2001, I felt I needed to make something different than my past sculptures and meet a public audience. My wife, Dorothée, thought the concept of the bottle and the heart was very good–so I had her heart in mind. The idea to take a “common” good, the bottle, and make it uncommon was another very important basis for my work.

What do you hope for people who buy and/or receive one of these?

I hope that people will be surprised by the bottle, and see something that they’ve never seen elsewhere–completely natural, without a screen. I want them to be connected, fascinated, hypnotized, and offer it to their friends and lovers, to show them how important they are.

Gift Lab: Is this Cocktail Tool Truly the “Ultimate”?