In Praise of Sound Design: Introducing the Public Radio

*Editor’s note: The Public Radio – Single Station Tuner is coming soon to our assortment. Get it first by pre-ordering here. 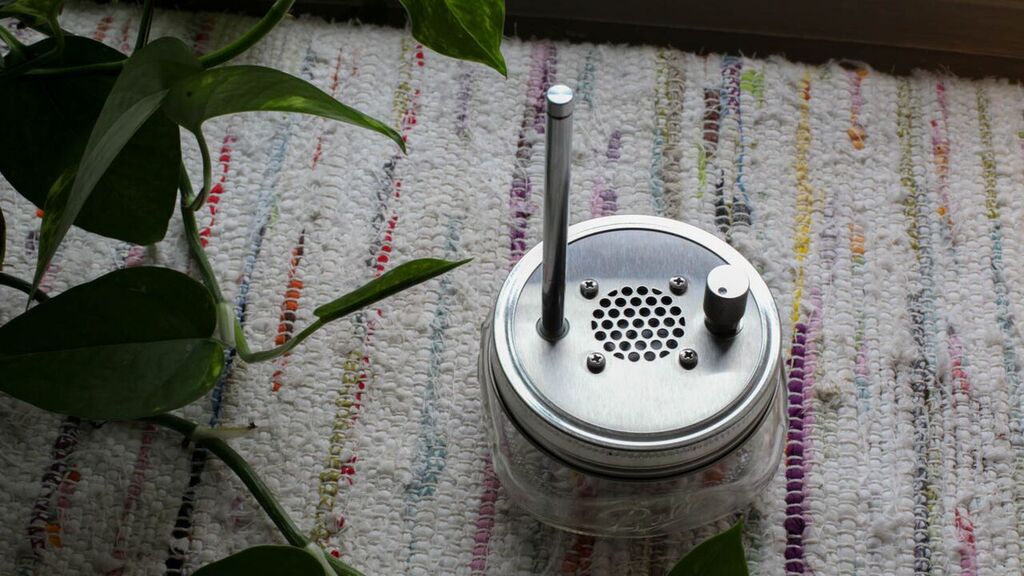 Modernity can be a little overwhelming. Don’t get us wrong, of course; the internet is an amazing tool, and smartphones make virtually everything easier, from navigating the wildlands otherwise known as the subway system to finding out whether it’s going to rain in fifteen minutes or if that cloud’s just looking a bit more angry than usual. We agree: These are all good things. But sometimes an escape from the wealth of information our era provides seems awfully luxurious. Sometimes you just want to turn your phone off for like, one second. And sometimes you’d rather not wonder which one of the hundreds of thousands of podcasts out there you should listen to today. You’d rather flip a switch, hear one thing (and one thing only), and move on with your life, complex as it already is. 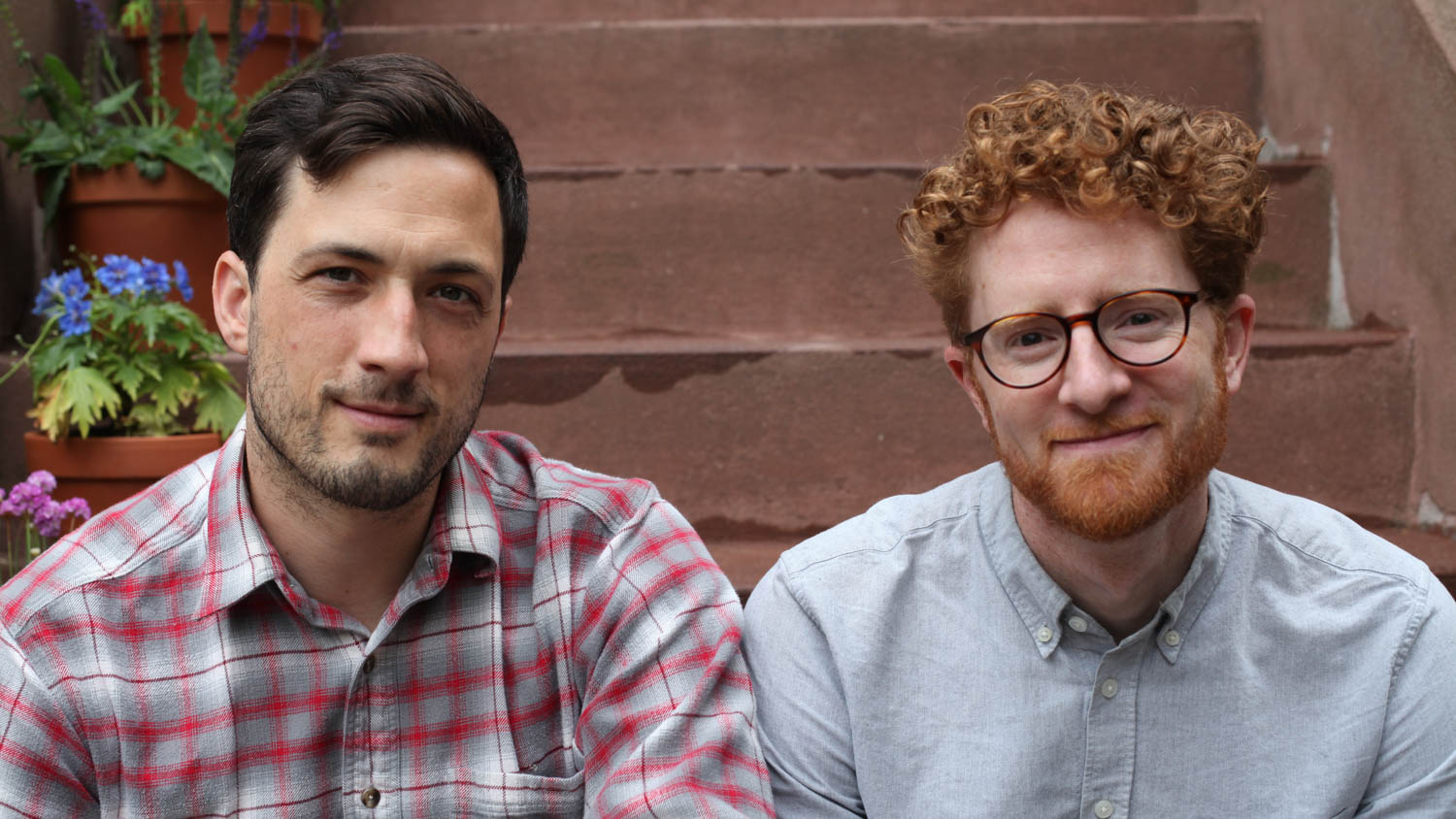 Enter the Public Radio – Single Station Tuner, brainchild of media and sound technologist Zach Dunham and his childhood friend Spencer Wright, a manufacturing strategist. A breath of fresh air among the seemingly endless streaming options in today’s digital landscape, the Public Radio – Single Station Tuner radically simplifies your listening experience. Tuned to a single FM station of your choice, it has only one knob, for volume control. And while lowercase public radio (or, y’know, Hot 97) devotees will appreciate the ease with which they can tune into their favorite station, design aficionados will take to the gadget’s thoughtful construction, which allows it to fit into any wide-mouth Mason jar—not only the cute, compact half-pint variety it ships with. 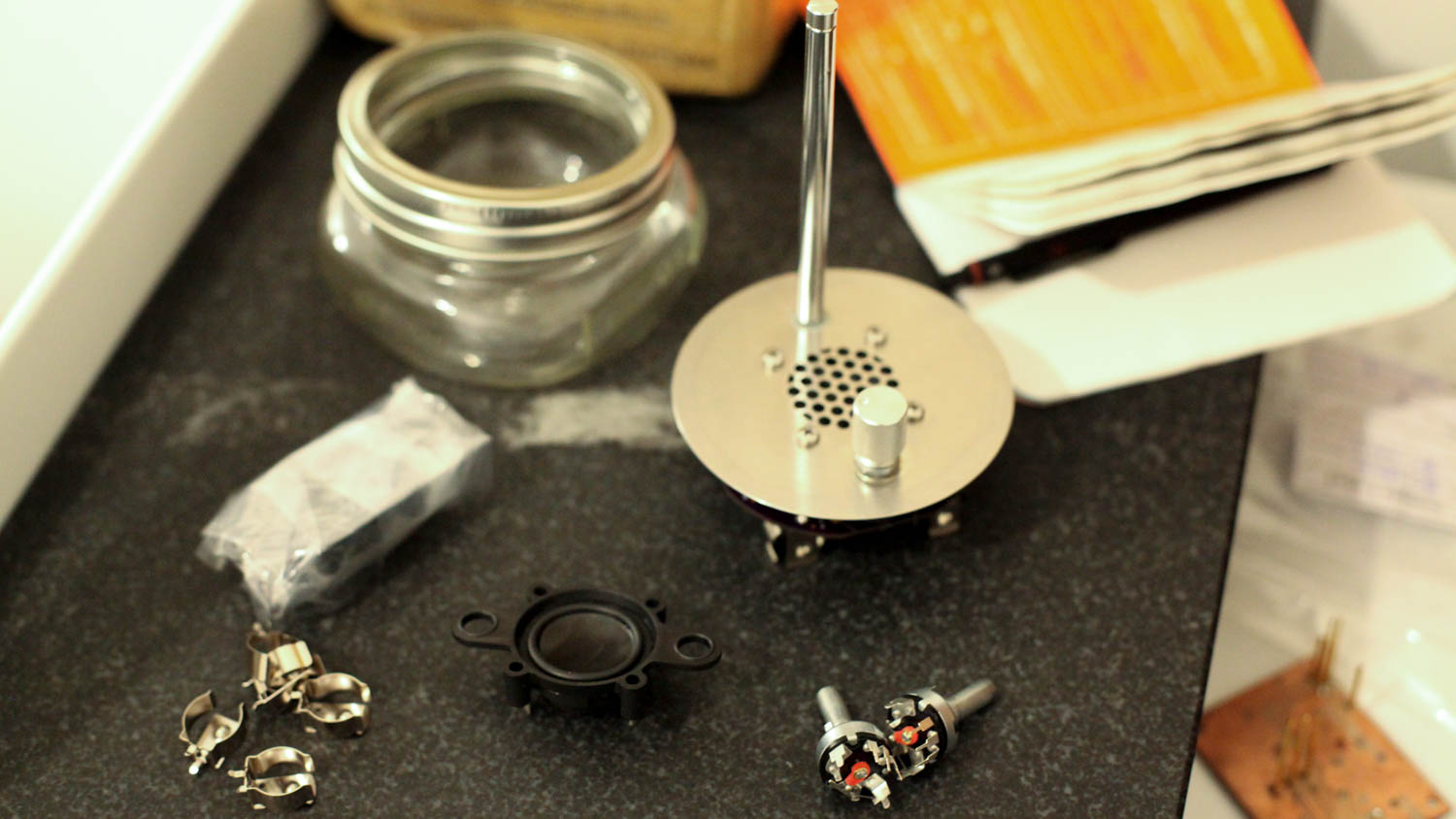 But wait. A single-station FM radio? In a Mason jar? You heard—er, read—us right. It’s a unique idea, to be sure, and one several years in the making. “In 2014,” Zach says, “Spencer and I were both taking an online course from MIT called 6.002x—a required course for all electrical engineering majors. At the end of the course I wanted to work on a project that would keep me learning about electronics. I decided on making a single station radio because of the overlap with the coursework and my love for radio [and] ultimately convinced Spencer to work on it with me.”

With their single station idea, Zach and Spencer sought out to streamline and simplify the act of tuning into your favorite station. “We thought a lot about the relationship we have with complicated devices,” Zach notes, “like our phones—where the choices and interactions are endless—and wanted to make something that was single purpose, simple, and beautiful. When we thought about how we used a radio at the time, it was clear that we could strip out a lot of the complexity and make something that was compelling and somewhat fun.” 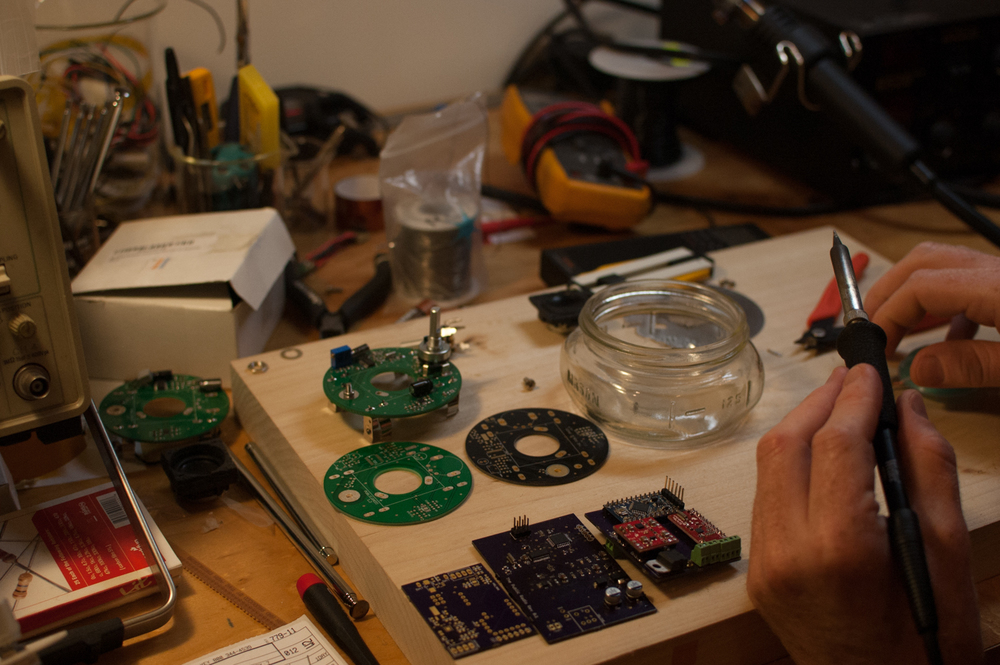 Zach and Spencer knew that the radio’s design, much like its core concept, should be as simple as possible. But that doesn’t mean that the pair’s design process was necessarily straightforward. “The initial design was going to be in a rectangular wooden and metal enclosure,” says Zach. “One evening while we were testing speaker samples and needed an enclosure to place them in, I reached for some cardboard and what was next to me, a Mason jar. We cut out a hole for the speaker and attached the makeshift lid. It somehow was perfect.”

“We realized that our small 1.5” speaker sounded great in the jar,” he adds, “and the look matched the overall spirit of the project.” 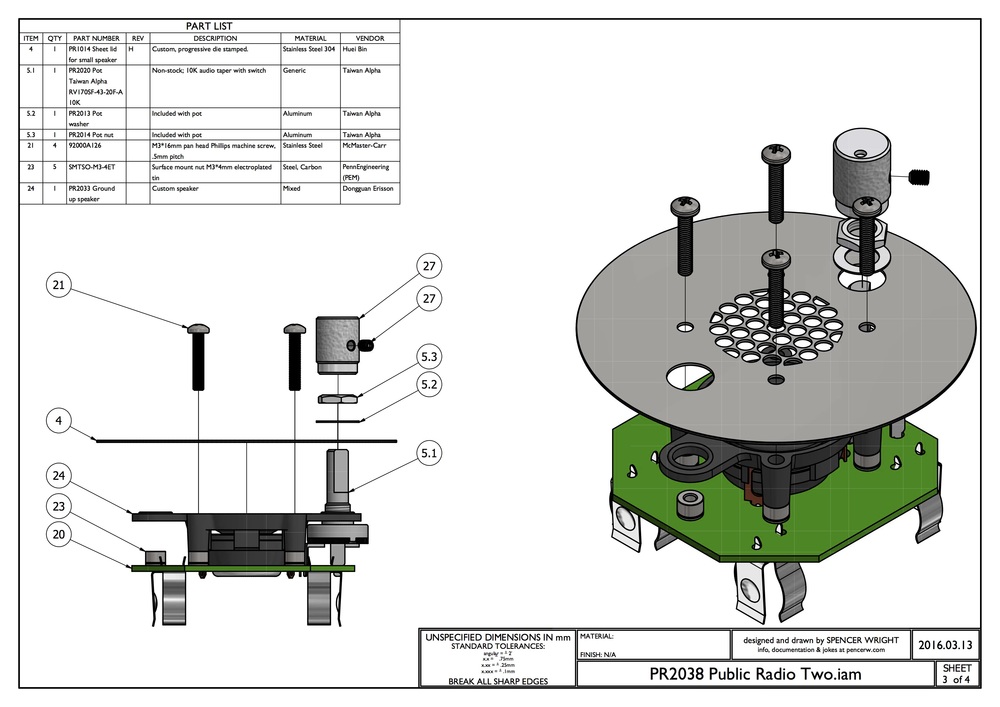 With happenstance, however, come hurdles. Although the design itself fell into place without issue, the duo initially found it difficult to program their radios efficiently. “Because the Public Radio ships pre-tuned to a customer’s station,” Zach notes, “each radio gets electronically programmed before getting boxed up. This step has taken of bit of prototyping for us to be efficient with, but has meant that we’ve learned a lot about our shipping process.”

As for the name? “The first proof of concept version of the radio that I made had a switch to choose between two stations,” says Zach. “At the time it was set to Hot 97 and WNYC. A close friend and I were laughing about the contrast of the two stations, but knew that the single station version would be most popular with NPR fans. At that point the name just became a play on words and a simple one that still feels suiting to us and our audience.” 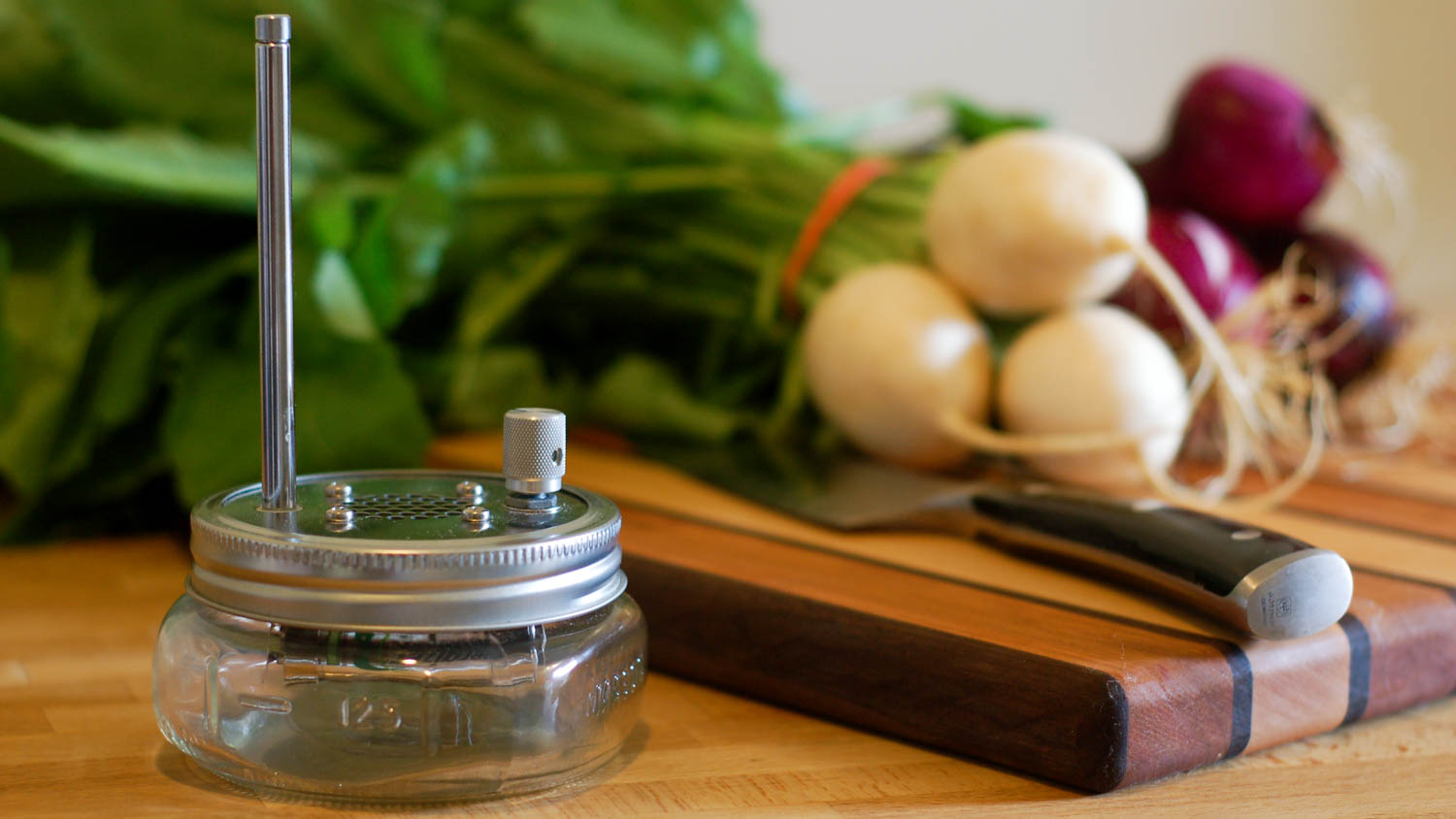 Sleek, fun, and simple, the Public Radio – Single Station Tuner ships pre-tuned to the station you choose (although you can change it if you have to) and is small enough to travel easily throughout the house, perching elegantly on your desk, or on your bookshelf, or even on your kitchen counter, spreading sound as it goes. “I think after owning it,” Zach says, “people comment most on how refreshing it is to have a single-purpose device. There aren’t any apps, passwords, or screens required which is uncommon in the technology and gadgets we own these days.”

Himself a public radio devotee, he adds, “Mine is tuned to WNYC. [But] Spencer keeps his set on Hot 97.”

Our Guide to Sixth Anniversary Gifts: An Ironclad Bond… That’s Sweet as Candy