Uncommon Impact: Sending Light and Love with the SolarPuff 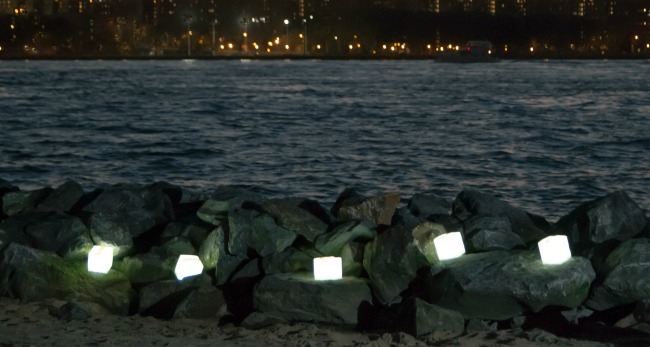 All images and videos courtesy of Solight Designs ™

Some of us take light for granted. The sun goes down, we flip a switch, and our homes are flooded with an electric-energy-fueled sunshine substitute. But for the 1.6 billion people in the world without access to electricity, it’s not that easy.

In many areas around the globe, kerosene is used in place of electricity. Kerosene, like gasoline, is a fossil fuel made from petroleum. It’s expensive, it has to be burned to create energy, and burning it creates air pollution. Unfortunately, many families don’t have access to any other source of light. That makes cooking, studying, or even seeing the face of the loved one sitting right across the room impossible without the aid of kerosine lamps. Use of these lamps can be dangerous. They get hot, they send soot into the air, and in some cases, they even use open flames.

Aiming to bring a safe, clean alternative to kerosene to those living by lamplight, product designer, architect, and Professor of Design and Material Culture at Parsons the New School of Design, Alice Min Soo Chun developed the SolarPuff™— an inexpensive, collapsible light powered by the sun.

We chose to feature Alice and her company, Solight Design, in our Uncommon Impact series because they truly exemplify the values we celebrate. The features in these series generally open with our statement that as a certified B Corporation, sustainability means more to us than just being “green”–we strive to offer products that reflect the environmental and social best-interests of everyone.

Yes, the SolarPuff is made from non-toxic materials (PET instead of PVC, which releases harmful volatile organic compounds), it uses renewable energy, and it can be recycled at the end of its long life, but Solight is doing good that goes beyond the production of the product. They’re creating the real uncommon impact through how they’re using the SolarPuffs. 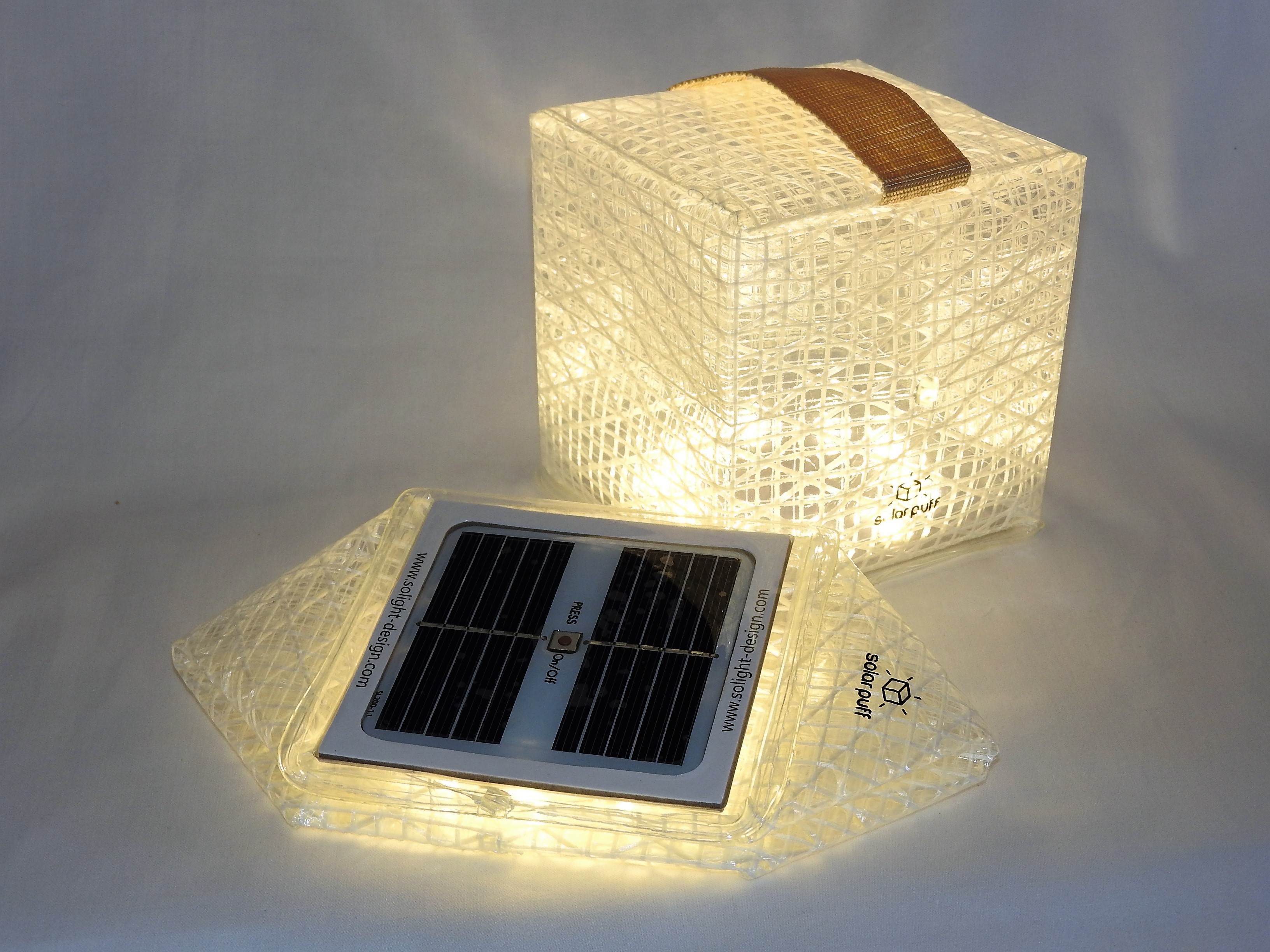 “Our motto is: Hold the sun in your hand,” Alice explained. “Together we can all hold the sun in our hands and change the planet for the better.”

To help people around the world “hold the sun,” Solight Design works closely with Studio Unite, a non-profit comprised of designers and architects working to “cultivate social, economic, and environmental growth.” Together with Studio Unite, Solight has donated SolarPuffs to those in need in more than 20 countries.

Although the overall goal was always to bring an affordable solar light source to those in need on a global level, the SolarPuff design as it exists now was developed in response to the 2010 earthquake in Haiti.

“[The concept] was already on my mind,”  said Alice, who had developed an earlier solar light prototype in 2009. “I’d been doing research into integrating solar panels with fabric and creating lighting with that technology. Then when the Haiti earthquake happened I shared all of that information with my students [at Columbia University].” Alice then turned her design studio at the university into an innovation lab and she and her students worked to generate ideas and develop solutions that could help those affected by the earthquake. 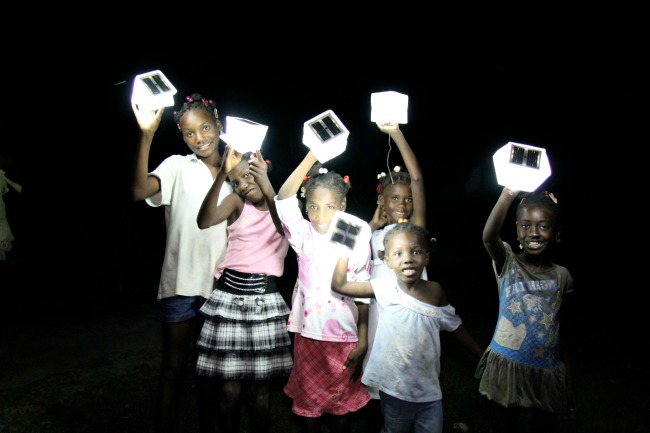 Children with their SolarPuffs at an orphanage in Haiti

“The prototype for an inflatable pillow happened first,” She continued, “and then I realized that the mouth hole for blowing something up with your mouth is not sanitary. In regions of extreme poverty, cholera, Ebola, now Zika, can be spread through bodily fluids. This [collapsible model] is the most hygienic because we use recyclable materials and you don’t need your mouth to inflate it. We have the only patent for a flat pack, self-inflated solar light.”

The SolarPuff really does shrink into an extremely portable version of itself. The collapsible design is inspired by origami, which Alice grew up with, and it’s also informed by Alice’s background in architecture. Each light folds into a flat pack making it easy to take anywhere and reducing shipping costs when sent in bulk. The compact design is beneficial to consumers buying the SolarPuff for camping or hiking, but it’s also a feature that makes the design a good fit for use in developing areas.

“One of the things that’s happening with products in general is everything is becoming much more adaptable. Anything that is more compact is easier for the user—the customer. The other thing is, for third-world areas, saving money on shipping is a big issue. So, for a natural disaster, you can put hundreds [of SolarPuffs] in a box, versus regular lanterns, which you can only fit about eight in a box… the other thing is, in third-world areas, and also for us, for camping, and outdoors, and hiking, we need something that’s extremely light. In third-world areas, there are a lot of villages with no roads, in the hillsides, so carrying big bulky things is not practical. These are really light. You can carry them easily.” 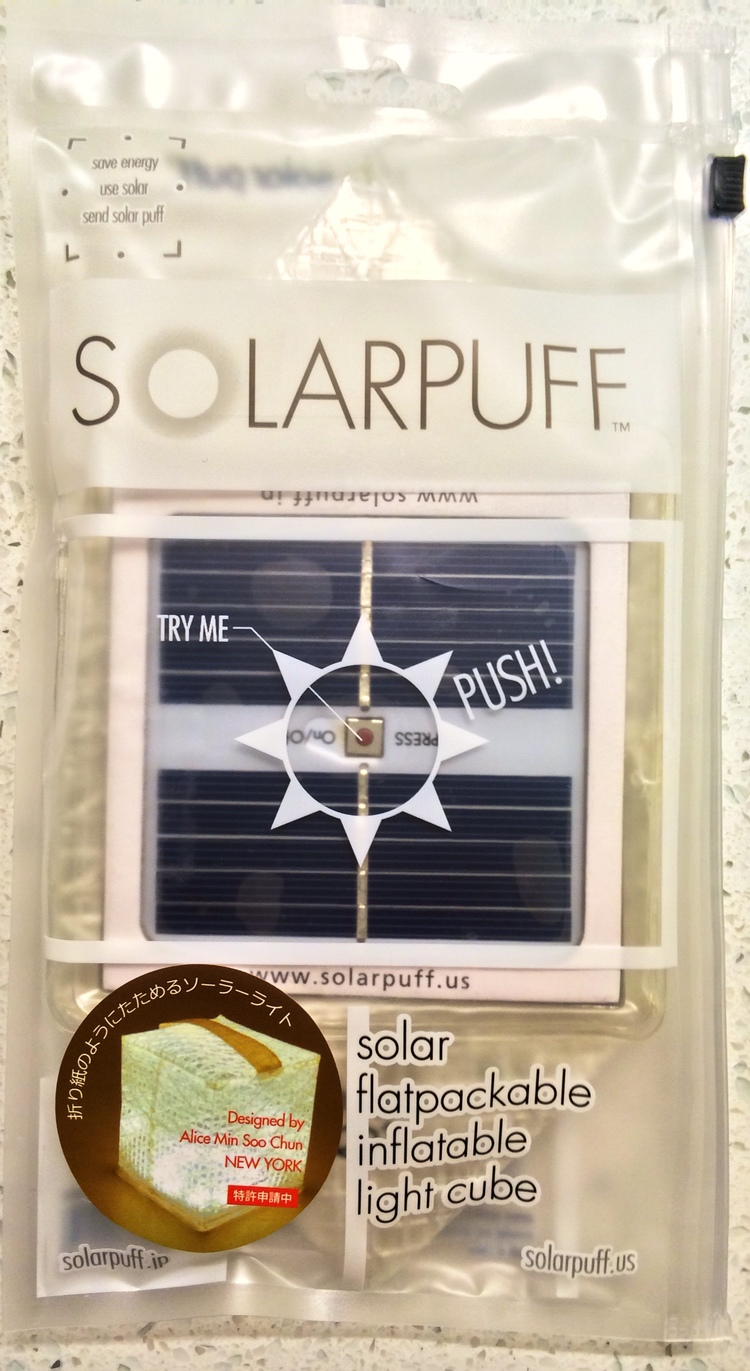 Alice explained that through her team’s research they learned that during natural disasters and other crises, displaced victims, especially women and children, are at risk. They face the possibility of abuse, kidnapping, rape, and even death. “ If they have a light, it keeps them safer, so they’re less likely to be attacked because they are more likely to see their attacker. In the dark, there are more incidences of assault,” she said.

There are currently more than 65 million displaced people in the world, and sadly, we’ve all heard stories of charitable organizations who don’t always make the most of the time and money donated to them. So, how do Solight Design and Studio Unite make sure these lights are actually getting into the hands of those in need?

“I take the lights personally to the refugees,” said Dr. Alison Thompson, one of Solight Design’s Humanitarian Advisors and Executive Director at Studio Unite.

Alison spent the last year with Syrian refugees in Greece. “They are landing in their boats in Greece and they are drowning. So when we do these rescues we throw [the lights] in the water so we can see… when you land in the pitch black in Greece you have to walk 31 miles to the refugee camp. These are amputees, kids, babies, pregnant women walking that far. [SolarPuffs] are so light that they can take them on the journey with them.”

Alison and the volunteers who accompany her on relief missions have seen people face extreme hardship and poverty that may be hard for those of us who don’t often face danger to fathom. “It’s dark and [the refugees] are so scared.I’m out there face to face with these really suffering people who have been tortured by Isis. The kids have gunshot wounds… It’s not about just giving [SolarPuffs] out. I give love and light. I hand deliver them to each tent. I show them how it works and give them a big hug, but there are 18 refugee camps in Greece and we can only go so fast.” 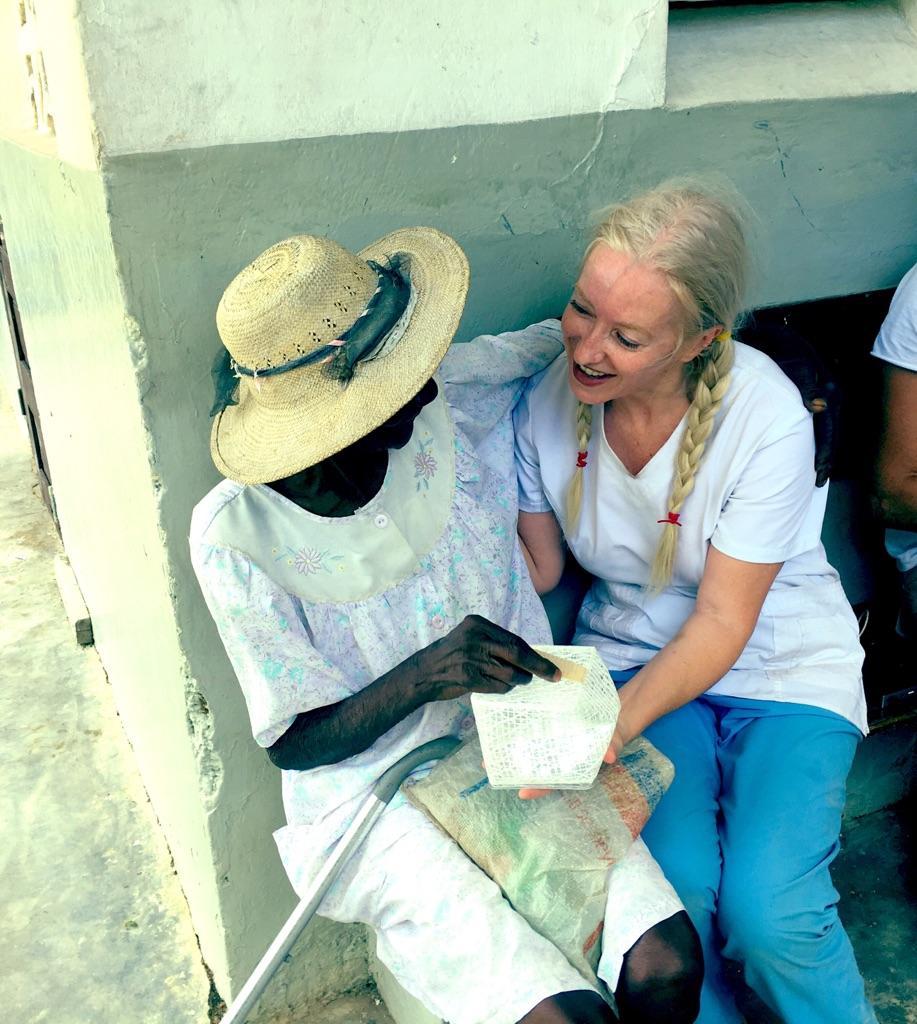 This much-needed aid in Greece has unfortunately been put on a temporary hold, as Alison, who met Alice after first seeing the SolarPuff while helping in Haiti after the 2010 earthquake, is now in Haiti once again in response to Hurricane Matthew. The category 4 hurricane hit the island nation on October 4, 2016, claiming 1,000 lives and displacing countless others. In order to bring more lights to Haiti, the team has added a pledge to donate SolarPuffs to Hurricane Matthew victims to their latest Kickstarter campaign.

Natural disasters like Hurricane Matthew and man-made threats to safety, such as terrorist groups, increase the need for aid to displaced people and refugees, and millions of people live in poverty and isolation do to other environmental and economic factors. One goal Alison, Alice, and their colleagues share is to break the cycle of poverty perpetuated by reliance on kerosene and other fossil fuels. 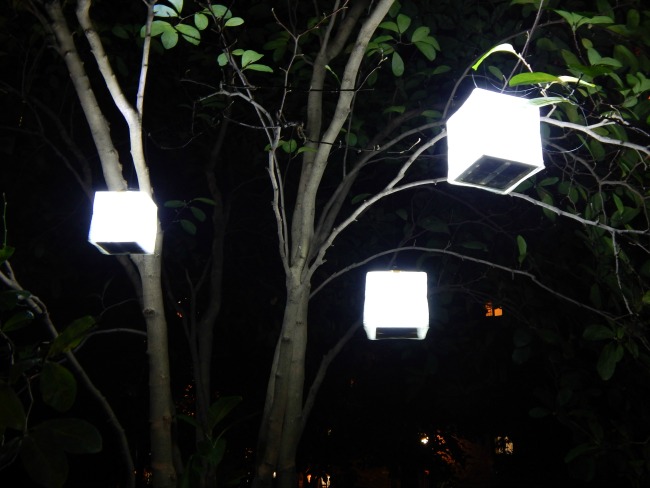 Alice explained how bringing solar light to not just to victims of disaster, but to everyone, has an extremely positive impact: “Most of the nearly 2 billion people without access to electricity are living in extreme poverty. Imagine if you’re living on $2 a day and you have to spend 30% of your income on kerosene, when you could spend that money on food, clothing, and education for your kids. We realized that this is a real problem solver. If we can get people to eradicate kerosene use, we’re cutting down carbon emissions by the billions and tons and we’re creating more income for people. In the First World, we’re actually saving on carbon emissions [by switching to solar lighting] as well, because one regular 60 watt light bulb can create 90 pounds of carbon emissions every year.”

One of the best things about the SolarPuff is that the same light that you or I buy to use as a reading light or to take along on a camping trip can help a student in Africa do her homework after dark. It can help a refugee in Greece find his way to camp. It can help a young mother in Haiti make sure her baby is safe. It can bring a smile to the face of a child who’s afraid of the dark anywhere in the world. 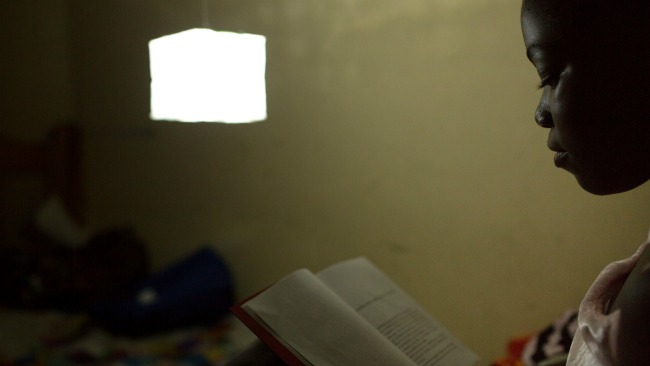 In 2015 Alice wrote a book, Ground Rules in Humanitarian Design, diving deep into the philosophy that design can be a powerful force for good. The book is 264 pages examining the many factors that influence humanitarian design, but she summed up the overall message in–much like the SolarPuff itself– a bright, little package that’s easy to carry with you: “In order to create real change, we have to all work together… Good design is a social act. Design, whether it’s a strategy for creating local economies, or design as a product solution, design can change the world.”

Gift Lab: Will Using an Updated Instant Camera Be a Snap?