Like many New Yorkers, if I need to get somewhere, I take the subway.

Whether I need to hop the train to travel from my apartment adjacent to Prospect Park down to UncommonGoods’ headquarters at the Brooklyn Army Terminal, or I’m bumbling through the Big Apple’s other boroughs on the weekends, cramming into crowded subway cars is as New York City as pizza pie. And like the more than 5.5 million passengers the system carries on an average weekday, the moment I step on the train I succumb to modern “tunnel-vision:” I bury my head in my iPad until I reach my destination. But when I step out of the train, I’m consistently surprised with the rich history laid bare in front of me in the form of the station’s diverse signs, vestiges of past design trends, fashions, and the mores of bygone generations. 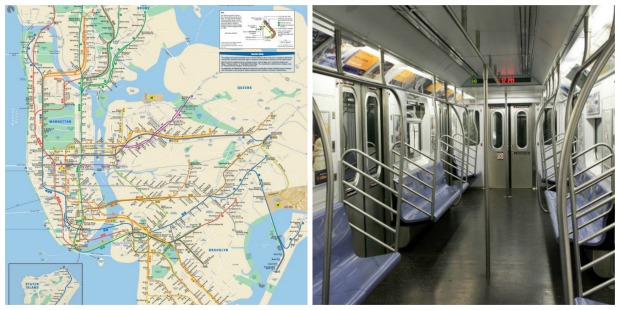 From its opening on October 27th, 1904, New York City had already envisioned the subway as more than a simple method of getting around the metropolis. While urban, the experience of riding the subway was intended to be urbane; from the beginning, the city hired artists to embellish the underground walls with fanciful, yet legible, decorations.

From 1901 to 1908, John L. Heins and Christopher G. LaFarge designed the earliest subway motifs in the popular Beaux-Arts style, evoking classical architecture using ceramics, metal, and wood. The Philadelphia-born architects – who are also known for their work in the Cathedral of St. John the Divine and the original Astor Court buildings of the Bronx Zoo – were heavily steeped in the Arts and Crafts movement, an international artistic trend that advocated traditional craftsmanship and striving to create environments in which beauty and technical skill were of paramount importance.

Accented with swoops and curlicues, cornucopias and floral medallions, the duo’s elaborate terra cotta signs endure as some of the system’s most recognizable emblems. 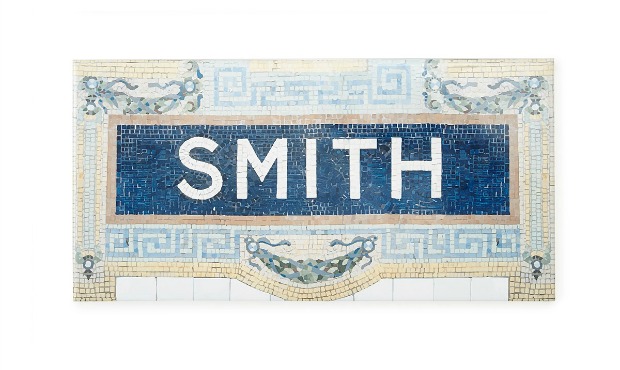 While quiet compared to the glitz and hubbub of Times Square above, Heins and LaFarge’s sumptuous mosaic sign is an unmistakable symbol of New York’s vibrant urban fabric. The original sign that inspired this tile is located at at Times Sq-42 Street, one of the system’s oldest stations at 111 years old. 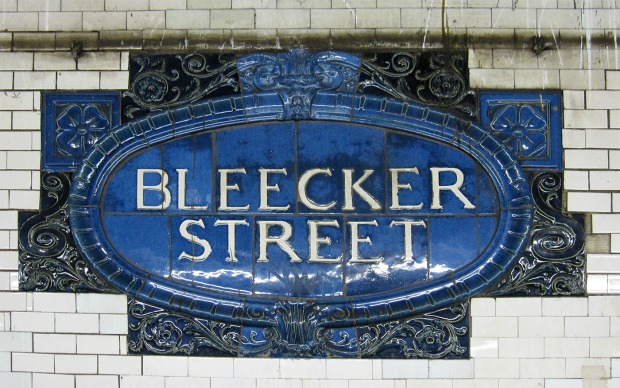 The elaborate tile-workings were not just decorative: each sign’s unique palette and patterns were used didactically to help non-English speakers identify stops.

The team’s successor and owner of arguably the coolest name in New York City history, Squire J. Vickers took over as chief architect of the New York City Subway system in 1906. Known as an “underground Renaissance man,” Vickers was responsible for more than 300 stations—the most of any architect—and was the system’s lead designer for almost 30 years. 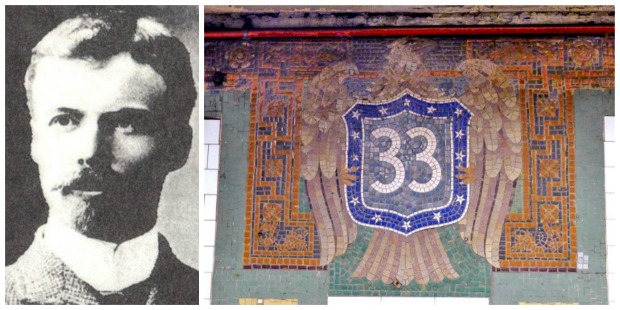 Squire J. Vickers and the “Vickers Eagle” at the 33rd Street Station

Vickers took the subway on a much more pared-down, modern path than that of his Beaux-Arts predecessors for both aesthetic and economic reasons. As the floriated embellishments that defined the Arts and Crafts style gave way to the slick lines and austerity of the Machine Age, Vicker’s signs reflected the era’s dominant graphic trends with their quilt-like geometric abstractions and bold colors. 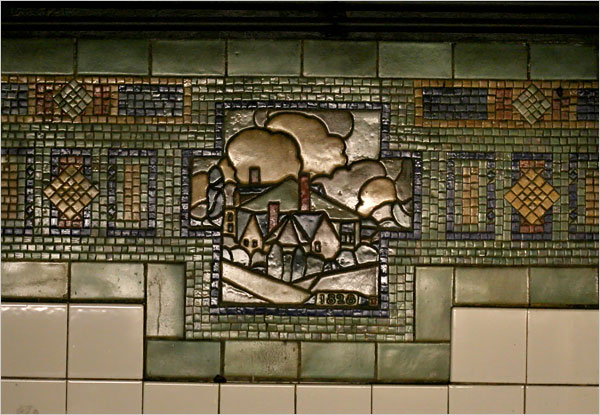 “How grateful to the eye is the wall surface unbroken by paneling, noxious ornament, or the misplaced string course, decorated, if you like, inlaid with color, but unbroken,” he wrote.

Vickers was also imminently practical and, especially during the Great Depression, many of his aesthetic decisions were driven by the bottom line. Mosaic elements were flattened, for example, so they would be cheaper to clean (“to avoid dust ledges,” he wrote). The intricate signs could also be set by hand in a factory instead of on the wall tessera by tessera, making them less expensive to install. 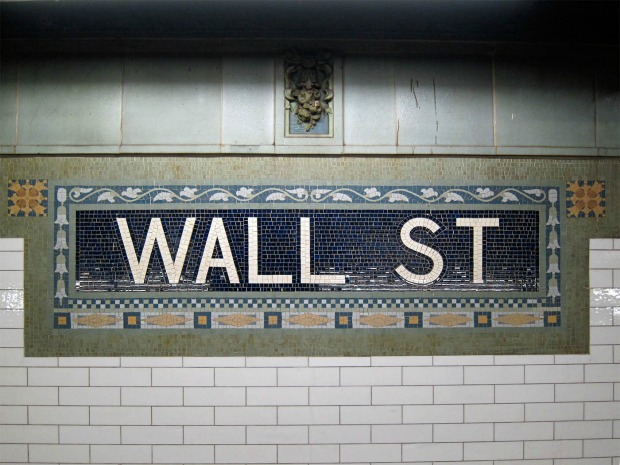 Despite budgetary constraints, Vickers, who was also a competent painter, was still able to create mosaics revered as much for their utility as their beauty. 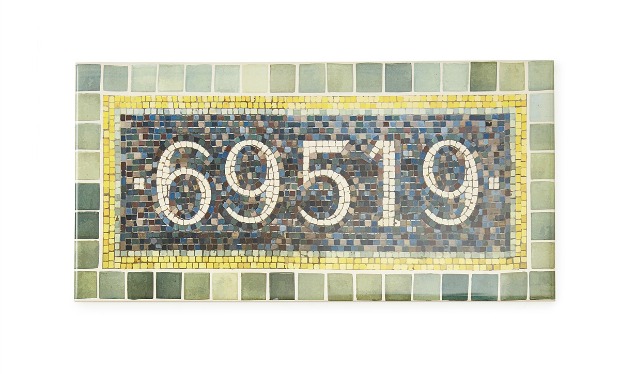 Vicker’s decorative details underground, at the Lexington Av/59 St station, complement the sophistication of the Upper East Side above.

To this day, the MTA commissions artists to continue the creative vision that was an integral part of the subway from the very beginning. New works are installed every day, from traditional mosaics, to sculpture, stained glass, and more, giving passengers plenty to see—as long as we’re willing to look.

Uncommon Knowledge: Can You Trust Your Gut?