Centuries of Beauty and Tradition: The History of Czech Glassware 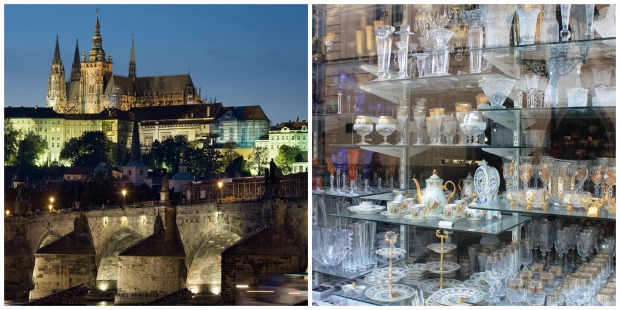 I’ve always found shopping for my Mother to be a challenge–it’s easy enough, but I try to score as many points with her as possible. Books run the risk of failing to meet her elevated standards, chocolate melts (or is eaten too quickly), and flowers inevitably wilt. I want something that lasts, something that I can reference in passing years after the fact if I’m trying to weasel my way out of something. Jewelry is a safe and durable choice, but as a mama’s boy with decidedly underdeveloped taste in bijoux, that too can get tricky.

We sell plenty of jewelry at UncommonGoods–more than I can process, in fact: a seemingly endless treasure trove of baubles fit to adorn any fine Mother. Yet variety in itself complicated my Mother’s Day shopping this year–how to pick? How to best maximize motherly approval?

Fortunately, a bit of context caught my eye. While eyeing a pair of Mosaic Earrings by Stefanie Wolf–elegant in their simplicity–I was reminded of a recent family trip to the Czech Republic and the amount of time we spent perusing Bohemian glass vendors in the heart of old Prague. Mom didn’t make off with any of the jewels then, but Stefanie’s artisanship evokes the centuries-old tradition of glass artistry in the Czech region of Bohemia, a perfect pick for a woman with a taste for la vie boheme. 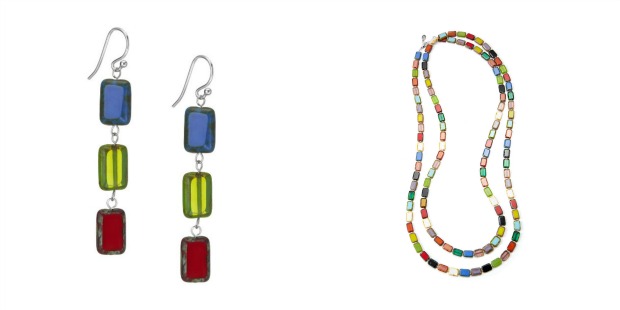 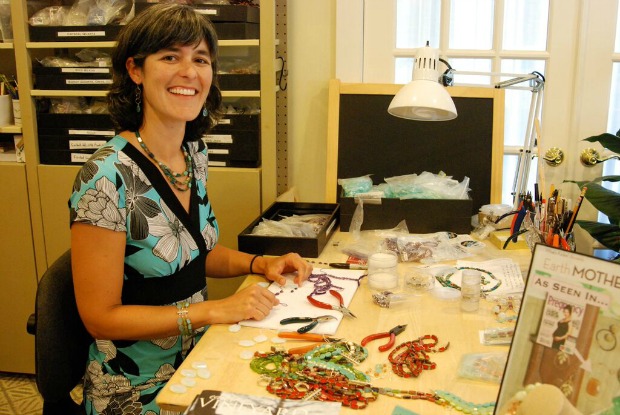 The Mosaic earrings use distinctively painted and chiseled beads called “Picasso Windows,” handcrafted in the land of Pilsner with the precise grace of Mucha, and only a dash of  Kafka’s brooding damper. Stefanie began using Czech beads after admiring their distinctive quality:

“Whenever I was bead shopping I noticed that the richest colors and most luscious finishes in glass beads always seemed to hail from the Czech Rebublic. Often imitated, never duplicated!” 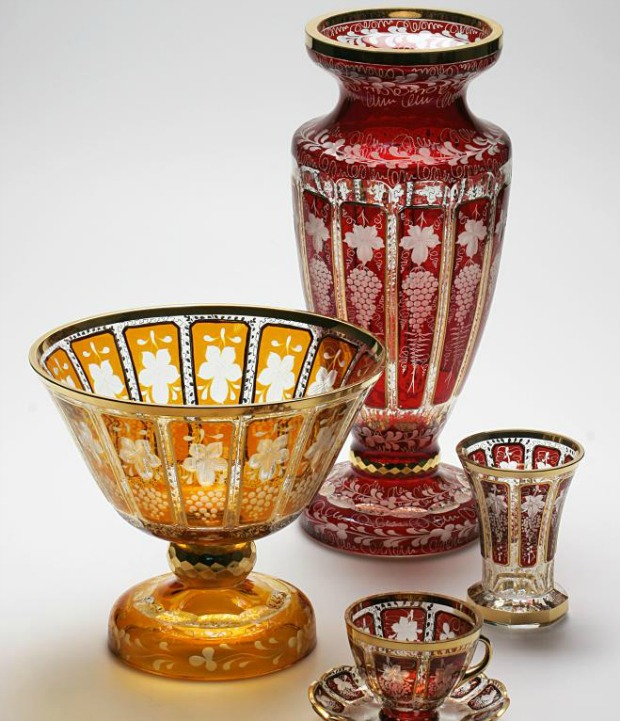 Bohemian crystal is renowned for its vibrant colors and intricate designs.

Glassmaking itself dates back as far as Ancient Egypt, where crude technology available to artisans led them to wind thin threads of glass over clay objects. Early Egyptian glassware was likewise crude due to imperfect and porous glass, but as glassmaking spread throughout the Mediterranean by the 3rd or 2nd century BCE, processes and materials were gradually perfected. 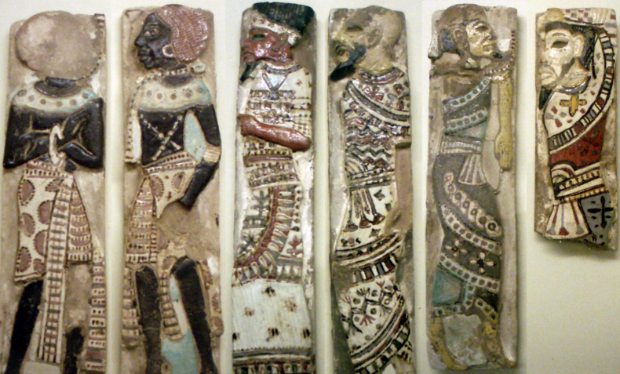 Ancient Egyptian glass and clay sculptures depicting the enemies of Egypt, on display at the Museum of Fine Arts, Boston.

Some of the oldest glass findings in Czech countries date back to around this time, when intraeuropean trade was richly facilitated by the consolidation of Roman road networks. Beads were likely imported from Celtic regions across the Danube, though some may have been of local Bohemian or Moravian origin. Glassmaking itself likely didn’t surface in the Bohemian basin until the early Middle Ages, but has since become a centerpiece of the region’s cultural expression. 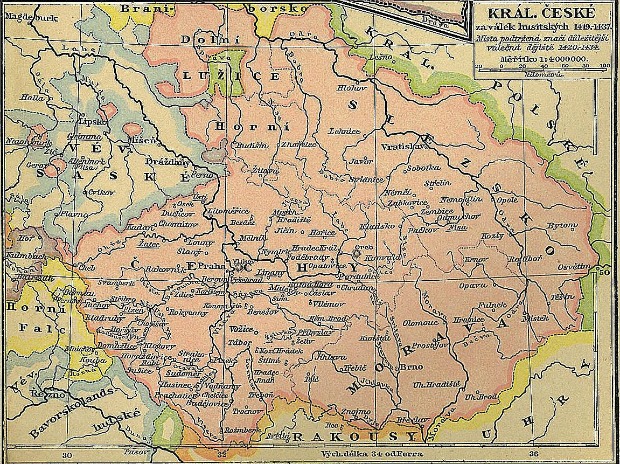 The glassmaking bubble began to swell in heavily forested Czech regions around the 13th century – medieval glassworks required copious amounts of wood to heat ovens and produce potassium, a key component needed to melt glass. Whole villages would pop up around isolated forest glassworks – and would subsequently disappear or relocate once the area was deforested. Eventually, some Bohemian nobles actually banned deforestation for the purposes of glass production, hoping to preserve sections of woodland for forestry. 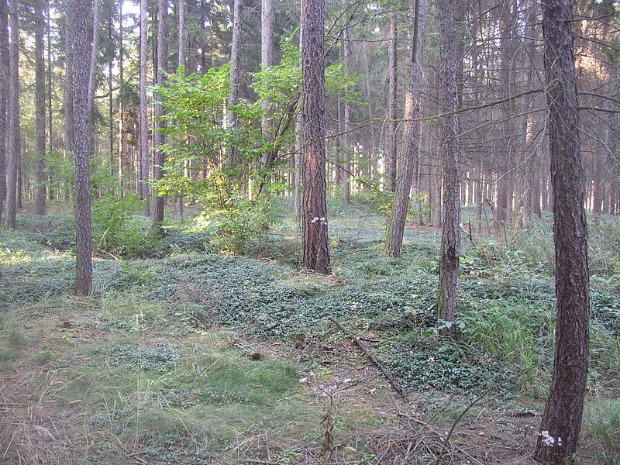 Trouble in Christendom was actually a major impetus for the escalation of art glass production in Europe. Cultural exchange brought about by the Crusades in the 13th century stimulated the use of glass for decorative purposes, and methods were further perfected. Bohemian craftsmen became some of the first to use different metal oxides to inject vibrant colors into their glasswork, secrets to which were passed from generation to generation. Ornate colored glass beads produced in the Czech Šumava region were likewise exported throughout Europe as Rosary beads, or ‘paters’ for the first words of the Lord’s Prayer. 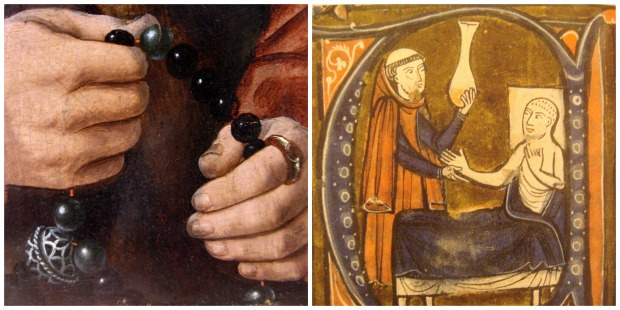 Medieval uses for both decorative and utility-oriented glassware sounds like the set up to a bad joke – clergy, doctors, alchemists, and charlatans came to demand glassware heavily, valuing that of Bohemian make most of all for its uniquely fine properties. (left) ‘Paters,’ Medieval Doctor and Patient (right).

By the Renaissance, artistic expression saw newfound emphasis as style and splendor trumped all. Bohemian craftsmen may have actually stolen Venetian state secrets in order to assume the position of premier crystal purveyor of the European Renaissance; a loose tongue regarding Venetian enamel painting techniques was punishable by death, yet somehow Bohemian craftsman were able to emulate and improve Venetian methods. Unique color variations, cuttings, and dynamic designs quickly characterized Czech glass as a priceless symbol of the region’s artisanry. 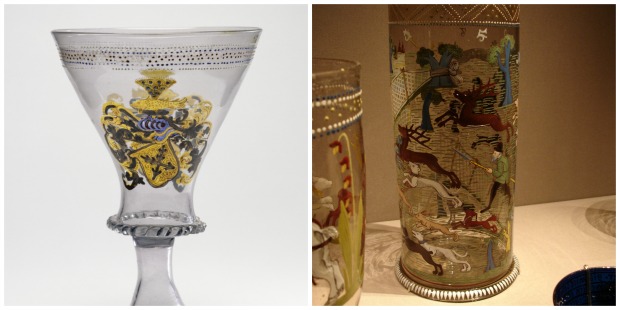 Emperor Rudolph II, Habsburg ruler of Bohemia during the late 16th century, was perhaps the most lavish of Bohemian glassware patrons – his extensive commissions helped to distinguish a Baroque style of glass craftsmanship. With the new Baroque wave came important advances in glass engraving; Rudolph’s gem cutter, Caspar Lehmann, pioneered new cutting methods that permitted the depiction of rich and detailed scenes in the Baroque tradition.

Considered just about as precious as jems and jewelry, Bohemian glass finery was sought after by monarchs and regents from France to India – today, Czech chandeliers hang in palaces from Versailles to Riyadh. 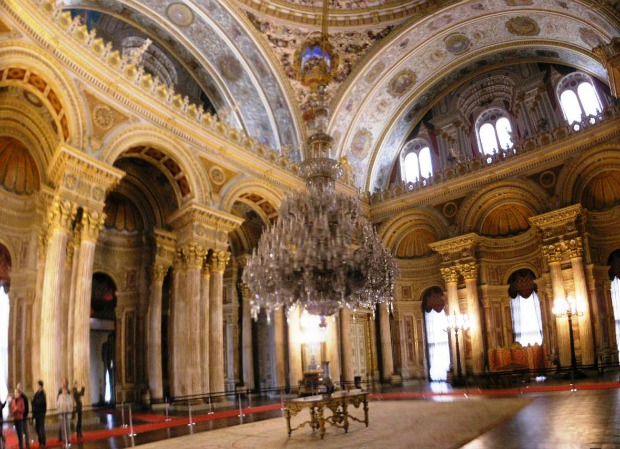 The World’s largest Bohemian crystal chandelier hangs in the Ceremonial Hall of Dolmabahçe Palace: a gift from Queen Victoria.

Bohemian glass craftsmanship has since retained its status as a highly skilled and esteemed profession, though the Baroque gradually made way for new styles. Professional glassmaking schools in Kamenický Šenov and Novy Bor (1856), still active today, are largely responsible for the modern retention of this esteem, as was Bohemian glassworks Klostermühle, which received the Grand Prix at the 1900 World Exhibition in Paris.

Renowned for its stability, Czech glassworks even held up under the weight of the Iron Curtain! Notorious for their destructive and repressive actions towards local cultures and traditions, Soviet communists ironically sought to promote Czech glass artisanry during their decades -long stay in Czechoslovakia, seeing it as a relatively inexpressive art form that supported the economy and character of the region. Though the craft form itself was relatively unchecked, some artisans were monitored, though a resistant spirit is evident in their work.

Today, the bulk of the Czech glassware and crystal industry is dedicated to the automated production of tableware, but handmade traditions still thrive as an important vein of cultural identity. Consistent with tradition, many glassmakers still work their craft in small, family-owned businesses; Stefanie is able to work directly with a Czech glassmaker for a personal touch to her materials. 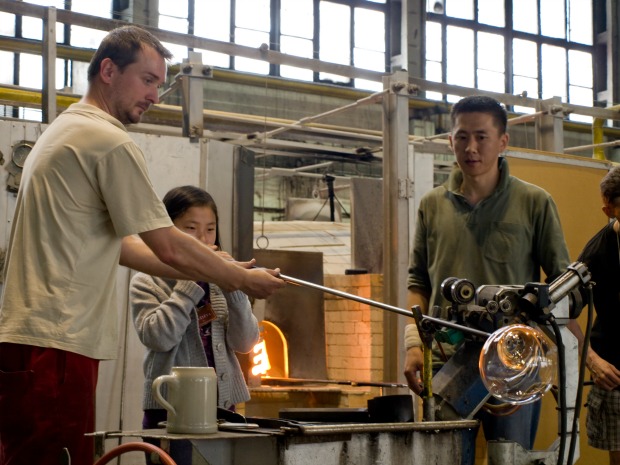 “My glass maker runs family-owned and operated glass bead production facility that has been in operation for generations. His father shapes the iron molds that dictate the shapes and details of the beads. He travels to Prague weekly to scan the available colors of glass rods, selecting his colors and bringing those rods back home.” 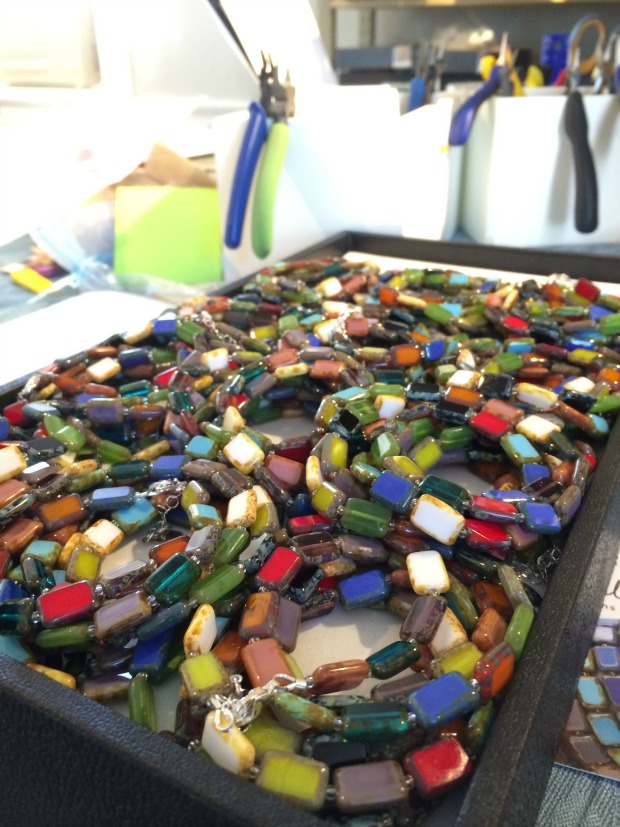 “Because we work directly together, I get to custom design the shapes and colors of my beads. Many of the beads I use can’t be found anywhere else but in my jewelry.”