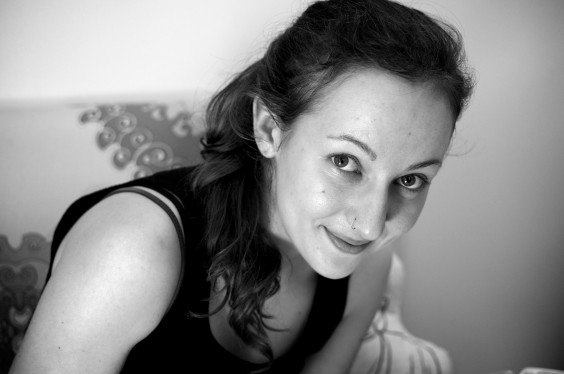 Our Art Contests are my favorite design challenges to orchestrate because they attract the biggest range of diverse talent. Art gives each individual artist a chance to not illustrate their personality or thoughts with words, but also with brush strokes, color combinations, and image creation. With Meirav Gebler’s “Human Landscape: A Disappearing People,” it was more than just strokes, color, and image that spoke out to me. I connected with “A Disappearing People” beyond the painting itself, a message that left me in a bittersweet state; it opened up wounds that I didn’t even think existed anymore.  Maybe it’s not exactly what Meirav intended her art to do, but I do believe artists create work based on their personal ideas and emotions, knowing that their audience might capture something a little bit differently.

Meirav is a young, spiritual artist who is based in Brooklyn and who has recently graduated from art and design school. She’s traveled to India and Israel and quickly fell into inspiration through “the colors and patterns, the smells of the streets, the market places, the people, and the food.” Her creative use of watercolors and gunpowder are the core of her masterpieces. At first glance it’s playful with your eyes, but the  dripping silhouettes stand behind a stronger idea that Meirav not only wanted to explore on her own, but share with you. 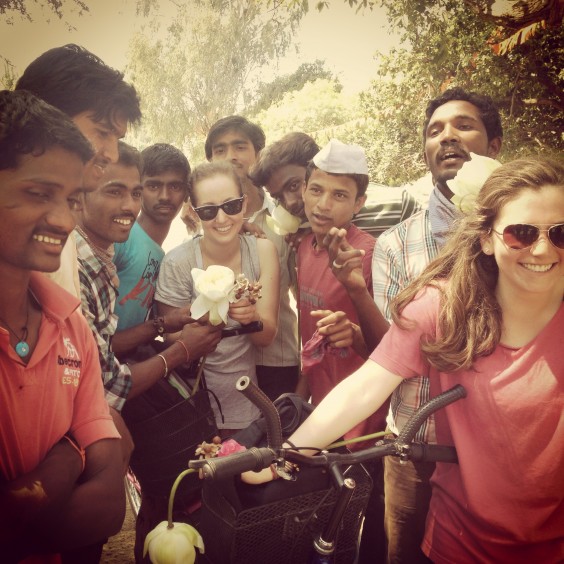 After you graduated from Art & Design school, you spent half a year traveling. Can you tell us about that experience and how it’s affected you as an artist?

Traveling was a wonderful adventure. I was in India for five weeks with my best friend and then spent a couple of months in Israel. India is such an amazing place. Everyday was an insane, crazy experience! Everything is so vibrant and stimulating—the colors and patterns,  the smells of the streets, the market places, the people, and the food! I brought travel paints and a sketchbook with me but since we were constantly on the move I found myself snapping more photos than sketching.

After India, I went to Israel for a couple of months to farm and spend time with friends—a huge contrast from the hustle of India. I did a drawing a day, which is a big deal for me since I am awful about keeping a sketchbook. I realized during these months how necessary it was to take the time to breathe, reflect and understand where I wanted my life to go post the college bubble.

You’re currently setting up a studio in Brooklyn. Can you describe it?

I move into the Brooklyn space next week, so I’m still in the process of packing up my old studio (a makeshift studio in a corner of my parents’ house). I’m super psyched to have my own space for art again. So, as of now, the new space looks like an empty box, but soon enough it will be filled with my paints and everything else I’ve collected along the way for potential projects. I always have to have breathable space. I feel blocked when things start to pile up and become cluttered so I need to maintain a sense of open space. And I always have one of those fancy dark chocolate bars from Trader Joe’s lying around. 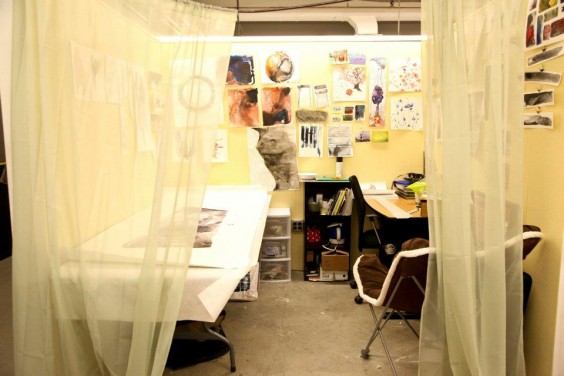 What inspired your Human Landscape series?

The series started as an exploration into an idea I’ve been grappling with over the past couple of years: how do we as physical beings, existing in a physical world elevate ourselves to a level of spiritual beings. I felt that the idea of a human landscape illustrated both an intimate personal context of the individual’s search yet illustrates the need to connect within the context of a larger universe as well. I find that coming to terms with my spirituality in such a materialistic physical world is an ongoing struggle, so this series is simply the beginning of that exploration. 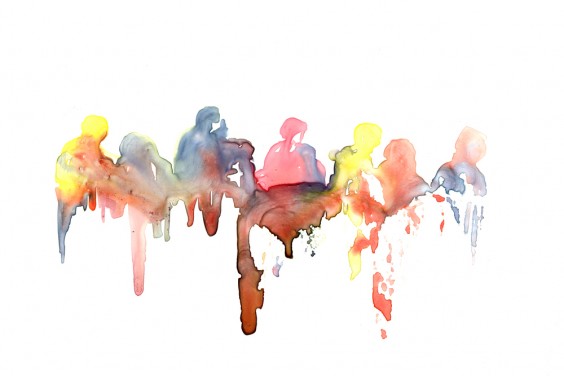 What materials do you use daily?

Watercolors, gunpowder, and my pens for illustration works.  Depending on the painting, I switch off between painting with paintbrushes or eye-droppers like the Dr. Ph Martin watercolors. Dr. Ph Martin’s are awesome because they’re super saturated, and I love the way they react to the gunpowder.  I mix the gunpowder with water to make it into a liquid-ey substance for painting. When I’m lacking inspiration I’ll burn the gunpowder and fuse it onto paper. It’s like an instant pick-me-up and the results are beautiful. (But really don’t go trying that at home!) 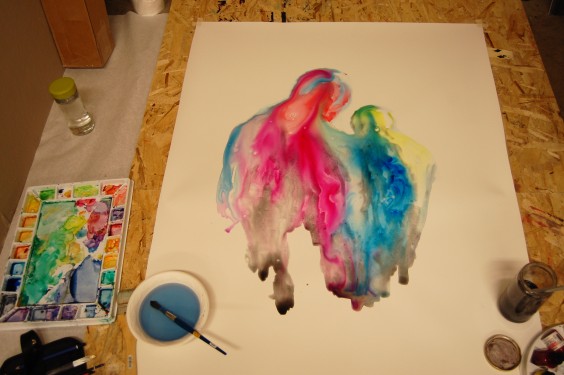 What is one of your favorite inspirational quotes?

“You open your hands and satisfy the needs of all living beings.” Psalm 145:16.  This quote grounds me, reminding me that ultimately things always have a way of working out. 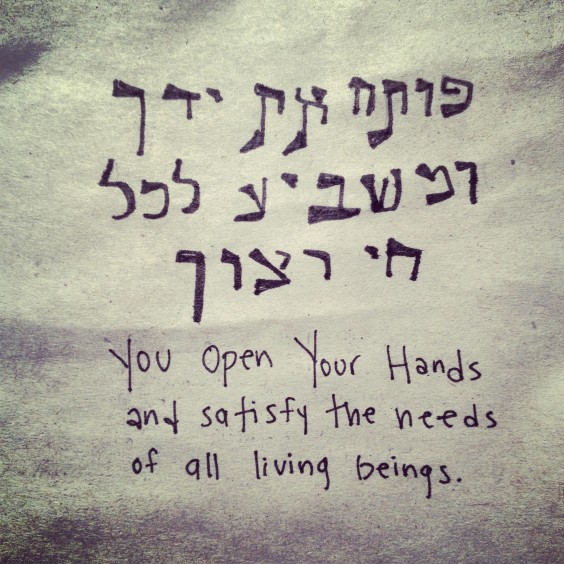 Which artist gives you that motivational push that you need whenever you look at their work?

Cai Guo-Qiang’s fire drawings make me pretty giddy. To stand in front of them is pretty awe-inspiring (his works are huge!). But it’s not every day you can do that, so I find motivation just by visiting galleries or even artists’ tables at flea markets because it reminds me that artists are out there working it and I want to be one too. 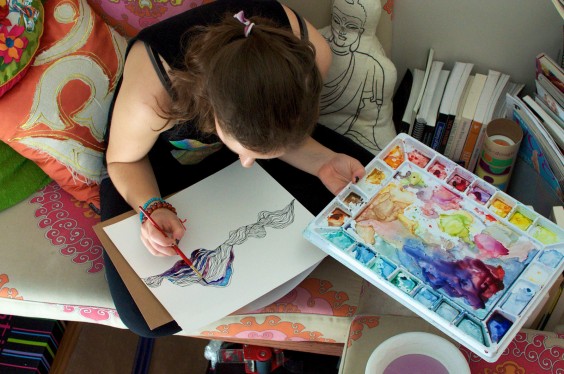 You say that you “paint to breathe.” Can you go into detail of what that exactly means to you?

There was a point a few years ago that I hit a creativity dead zone; I felt everything I was making was just awful, like I forgot how to draw. It was pretty bad that I felt like I forgot how to breathe. I was blocked because I thought each artwork needed to be a precious masterpiece (which they were far from!) so my art became stiff.  Soon after, I started working with gunpowder and fire, which reminded me that art is messy and unpredictable and that’s what makes it alive. I realized that to make art I needed to just go for it. Make something, anything and learn from my explorations and sometimes you get something worth saving. So I paint to breathe because painting is a constant reminder for why I live. Art inspires me to wake up every morning ready for whatever future explorations await me. 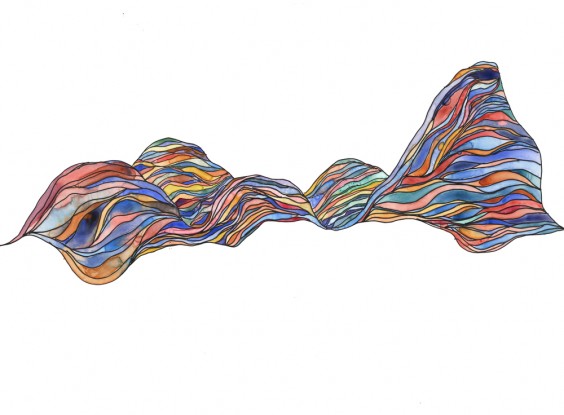 Being an artist means living in a constant roller coaster of ups and downs, can you describe a moment when you were on cloud nine and then the next day experiencing the lowest low? (Or vice versa?)

I have a pretty laid-back attitude so I’m generally not one to experience extreme highs and lows, but it’s been a pretty crazy year. I spent half of it across the world living out of a little red suitcase, then spent my summer bopping all over the states and now I’m finally moving to Brooklyn. I’d say last week was pretty close to cloud nine when I found out I won the contest, found an apartment and a studio and a job all in one week—yea that was pretty crazy! But of course I still have the uncertainty that follows in all of these new changes, like making it as an artist. 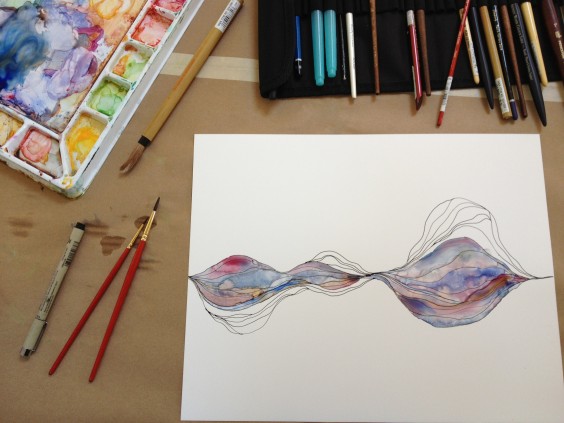 How do you deal with life’s discouragements or negative vibes?

I try and avoid them! But seriously, when discouraging things happen I think it comes down to making the decision if you want to wallow in the negativity or find a way out of it. It’s about surrounding yourself with positive energy and thankfully I have an amazing support system of friends and family who are always there for the extra push.

Are you pursuing any special projects or joining any events?

Right now I’m just focusing on getting back into my large scale paintings and experimenting with new works. 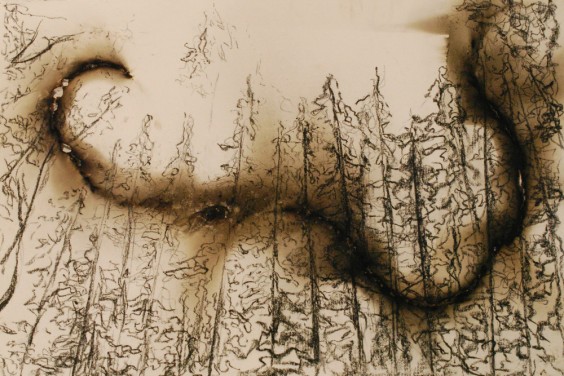 What’s one piece of advice you have for artists who would like to have their designs make it through to UncommonGoods’ design challenge semi-finals?

Just go for it. Trust your art, and the support of your friends and family will follow because they want to see you succeed. It also doesn’t hurt to blast every social media outlet available either! 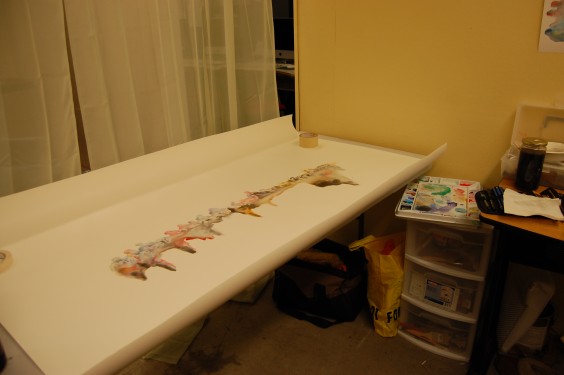 Why would you say your work differs from all the rest?

Oh gosh, that’s a tough one. My experience making art is still so young and I wouldn’t want to claim some aesthetic skill or perspective that’s totally groundbreaking.   But I think as individuals we all come along with our own unique set of life experiences and context and perspectives.  As an artist, I’m able to channel that perspective into visual experiences that communicate some aspect of who I am and where I come from.  My art is different because each work is an attempt to be honest about some reflection or observation that is ultimately my own.

Emily is a contributor to The Goods. She has a serious case of wanderlust that will most likely never be cured. She comforts herself with impromptu trips to thrift shops and speaking broken French to anyone who will listen. She spends her time crafting imaginary witty banter with HONY and stalking him on twitter. Her favorite uncommon good is the Hand of Buddha Jewelry Stand.