Gift Lab: Tell Us A Story 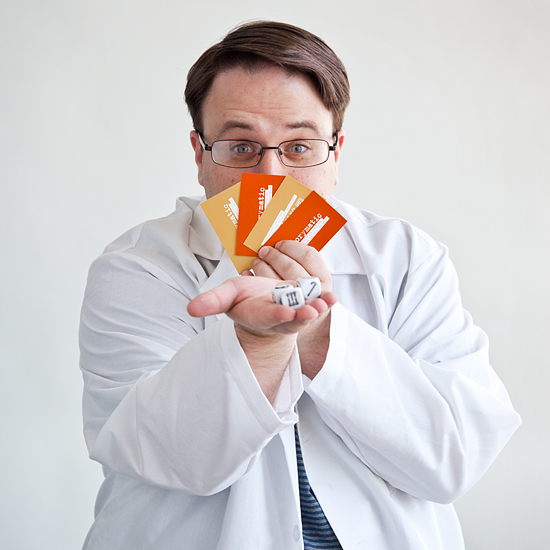 While I may be a mild-mannered writer for UncommonGoods by day… by night I’m a swashbuckling writer of Broadway musicals! Except for the swashbuckling part. And the Broadway part. But I do write musicals; you just haven’t heard of them yet.

Have you ever wondered why so many musicals are adaptations of a movie, or book, or something else? One reason is that writing a musical well is extraordinarily complicated, even without having to come up with a story from scratch. So writers like adapting existing material because it gives them a foundation on which to build.

The problem for new writers? That foundation can be pretty expensive — just imagine how much it costs to get a movie studio to agree to let you use one of their films! So as a writer, it would be a real asset to have a tool that helps me come up with exciting, original stories.

Among our writing products at UncommonGoods, we have two that are specifically designed to help you generate stories. The Storymatic uses a large deck of cards with prompts on them, and Rory’s Story Cubes are a set of dice with evocative images on them.

One of my favorite games has picture dice like the Story Cubes, while on the other hand, I feel a little intimidated by the size of the Storymatic deck. So my hypothesis is that the Story Cubes will be my most effective story-making tool. 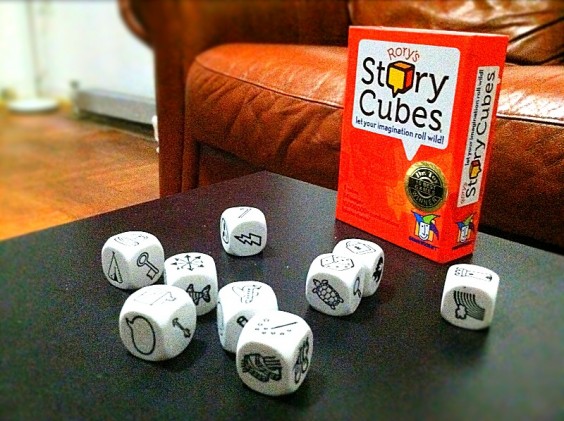 Using the Story Cubes is pretty intuitive. You open the box (which has a magnetic cover that swings open like a book) and inside is the set of nine dice. Dice are pretty self-explanatory: you simply roll them and see what turns up.

First to catch my eye are images of a fountain and a castle tower. I immediately picture the two together, in European style piazza where people chat and soak up the afternoon sunlight. There’s the image of a cane: I picture an old man who comes to sit by the fountain each day. Then there’s a strange image of arrows pointing out in all directions. I think, maybe the old man isn’t there today. Maybe someone is wondering where he is. I see the image of a lock—maybe someone locked up in the tower has been watching the piazza every day and realizes the man isn’t there.

I write the dialogue of a scene between two women up in the tower, and it comes pretty easily. One feels compelled to find what’s happened to the man, while the other tries to reason with her. The other dice images prompt specific lines of dialogue, or provide unexpected twists to the story that would be interesting to learn more about. The tone is mysterious, with a lot of room to spin the story into something longer. 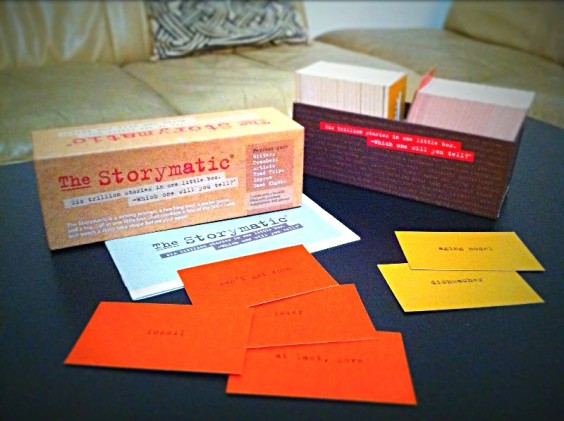 The box holds two different colors of cards with words on them, and what looks like a pretty involved instruction book. Unsure what I’m supposed to do, I start reading the instructions and discover that the process is actually very simple. There are “gold” cards that show personal attributes that combine to form a character, and “copper” cards displaying plot elements. The instructions look long because contain a number of ways to use the cards, but they all basically boil down to this: “Draw a couple cards of each color. Build a story around them. If you get stumped, draw more cards.”

For my character cards, I draw “aging model” and “dish washer.” Awesome. I can picture a once-glamorous woman reduced to working behind the scenes at the kind of swanky establishment she once patronized herself.

My plot cards are “can’t get down” and “fossil.” Hmm. I started by thinking literally, imagining a kind of adventure story where she’s climbing a ladder and gets stuck, but finds a fossil. That didn’t really appeal to me. So I started thinking more figuratively. I thought, maybe she really wants to leave the kitchen and join an event happening below. I wasn’t sure if that was stretching “can’t get down” too far, but I was the only one playing, so no one complained. I pictured her boss, who has no sympathy for her, and thinks of her as a fossil. Between the two of them I could picture some good dialogue.

When I ran out of material, but still felt like there was more to the scene, I started drawing more cards. The first I drew was “midnight in a graveyard.” Yikes. Wrong story. At first I felt like I was obligated to find a way to use it anyway, but once again I realized that I was free to make my own rules, so I kept drawing. I drew “fever,” which prompted my ex-model to try an excuse to get out of work. “At last, love” was a tough one, but it prompted a great little sarcastic rant, spinning off the idea of “where have you been all my life?”

You can listen to my stories here:

In the end, both sets helped me create intriguing stories with lots of potential.

Rory’s Story Cubes is simpler and feels more like a game. I can picture using them with friends just for fun. You could also do them as a travel activity, using the box to hold them when you roll. Because all you’re given are pictures, I felt like these were really liberating.

Storymatic feels more specifically like getting writing prompts, but they’re really interesting prompts, and combining them creates a huge variety in the results you’ll get. Because what you receive is so much more specific, I ended up investing more thought into the process of making the pieces come together, which in the end resulted the script that I liked better of the two.
With the Storymatic I found myself thinking about my characters in greater detail, while with the Story Cubes I felt like I was able to move more quickly into the action of my story. Both are effective ways of starting out, and I will most definitely be using them again.

How to Make It Video

Checking in with City Harvest