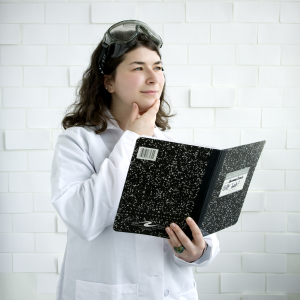 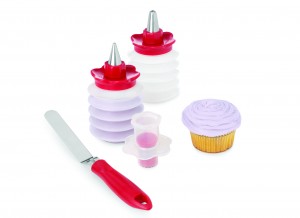 2) Background Research: I made Irish Carbomb Cupcakes for St. Patrick’s Day, and while they tasted great, they looked really sad — frosting in clumps or sliding off the cupcakes entirely! I like making cupcakes, but I shouldn’t have to convince everyone that they are, in fact, edible.

3) Hypothesis: If I use the cupcake corer and decorating set, my cupcakes will look just as delicious as they taste.

4) Experiment: Make the chocolate buttermilk cupcakes with caramel filling and chocolate frosting from the recipe booklet included with corer and decorating set.

5) Results: I couldn’t help but tweak the recipe, so I used 2/3 cup spelt flour and 1 cup all purpose flour, instead of just APF. Who says that cupcakes can’t be good for you? Also, the recipe mentions 2 tsp of vanilla extract, but the instructions don’t mention when to add it to the batter, so I included it after I added the eggs. 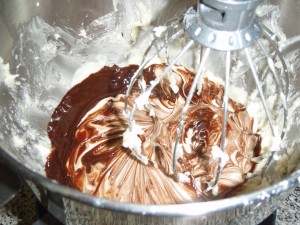 It’s entirely possible that I have a freakishly small cupcake pan, but I ended up with a surplus of batter for the 12 cups. 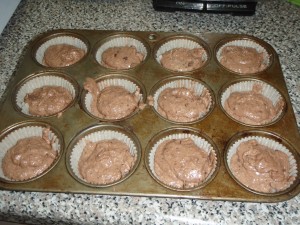 The instructions say to divide the batter equally between the 12 cups, and so I did, knowing in my heart that they were much too full. I couldn’t just let that delicious batter go down the drain; no, I had to make MONSTER cupcakes. Do not do what I did. This makes the cupcake cores really difficult to extract, since you can’t push the corer down far enough before the base of the corer hits the top of the cupcake. I ended up pushing down too hard on the cupcakes, which leaves a flower imprint on the top. Luckily, the icing could cover that up, leaving none the wiser. 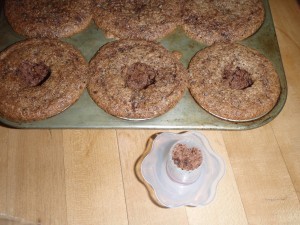 The cupcake cores, once finally removed, were not nearly so firm and compact as the ones shown on the product packaging. I choose to blame that on a skewed batter to cup ratio, and not a faulty corer. Filling the cupcakes was a much easier endeavor. The squeeze bottle has a large opening at the top, so I could spoon in the caramel sauce (dark chocolate dulce de leche!) with no trouble. 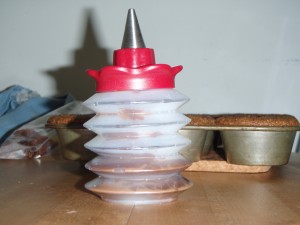 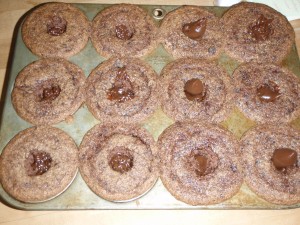 I was able to pipe the sauce into the cupcakes using the round metal tip, which creates a fun squiggle pattern in the center. I discovered that it is faster to remove the tip entirely, and squeeze the sauce through the red plastic opening. Then the cupcakes had a lot of thick saucy goodness in the center. I preferred quantity over quality (function over form?), but I was also eating the sauce by the spoonful in this stage of the process. 🙂

Onto to the icing, which is also tasty by the spoonful. I felt free to keep sneaking tastes, since the recipe makes a ton of icing. Really, there was so much that where I wondered if maybe I should have used that extra batter for more cupcakes. It was far too late for that, of course, so I filled up an extra squeeze bottle and put in my fridge. I didn’t have a game plan for decorating, since I wanted to play with both the flower tip and the round tip. The accordion shape of the squeeze bottles made it relatively simple to pipe an even amount of frosting at a time, as long as the bottle is filled properly, with no air pockets. 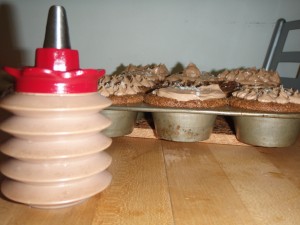 I pushed too hard on a few occasions and the flow of icing splattered all over the cupcakes. Thankfully, I used the enclosed spatula to smooth out the icing into a mound on top. I suppose I could have scraped off my frosting mistakes and started over, but I was getting tired at that point (sugar high leads to sugar crash is a hypothesis I have proven time and time again). 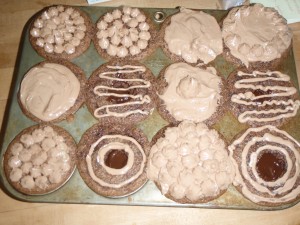 6) Conclusion: I might not have the hand-eye coordination or the patience to make perfectly decorated cupcakes, but the set helps me make them look far more aesthetically pleasing than they ever had before. Oh, and the cupcakes were delicious!

Kira is the Operations Analyst. She has piles of yarn and plans to finish knitting a hat sometime before it's too warm to wear one, prefers reading with a purring cat in her lap, and cooks more food than she and her boyfriend could ever eat.

For the Love of Dad